My very last blog for Obubu!

Tea Cultivars: All About the Plant! 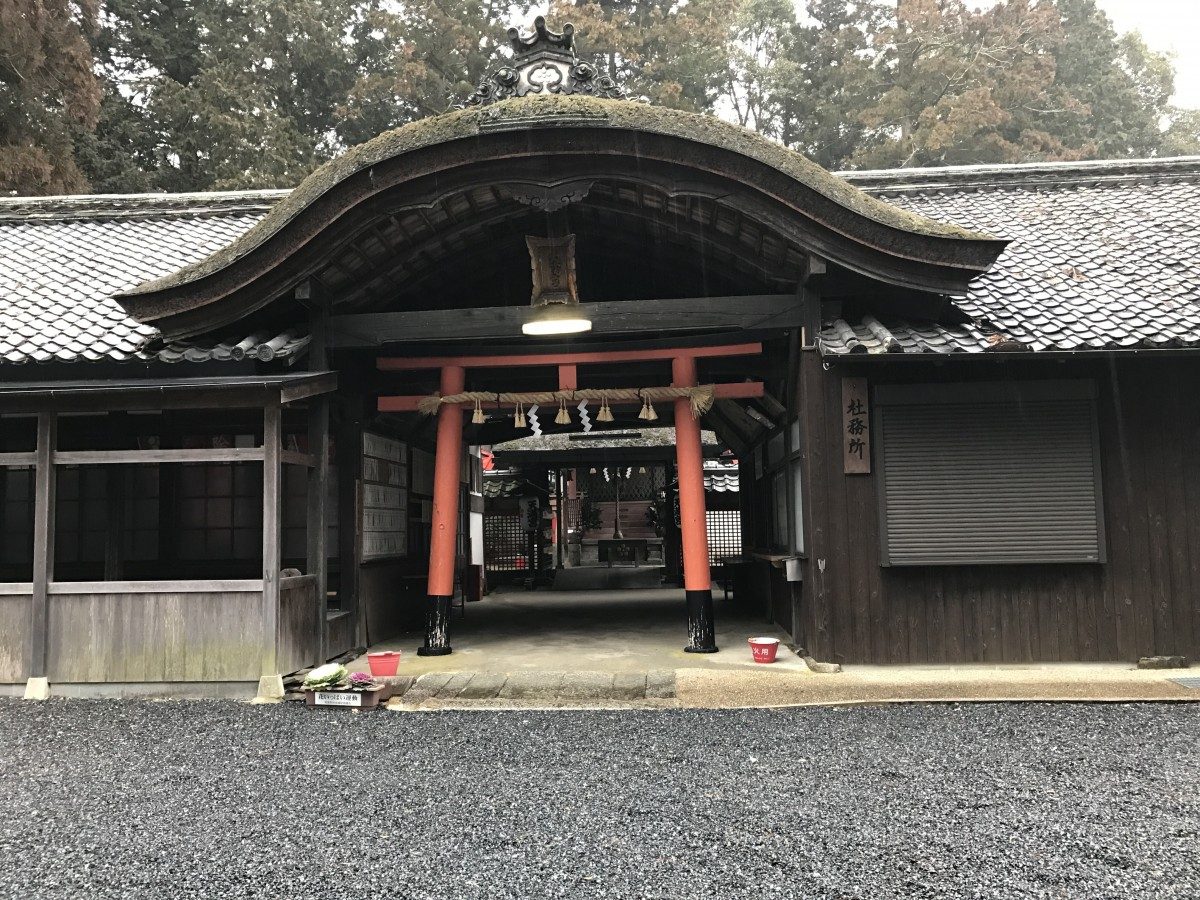 Shrines and temples are everywhere here, from the huge buddha at Todaiji in Nara, to the tiny jizo shrines along country roads. 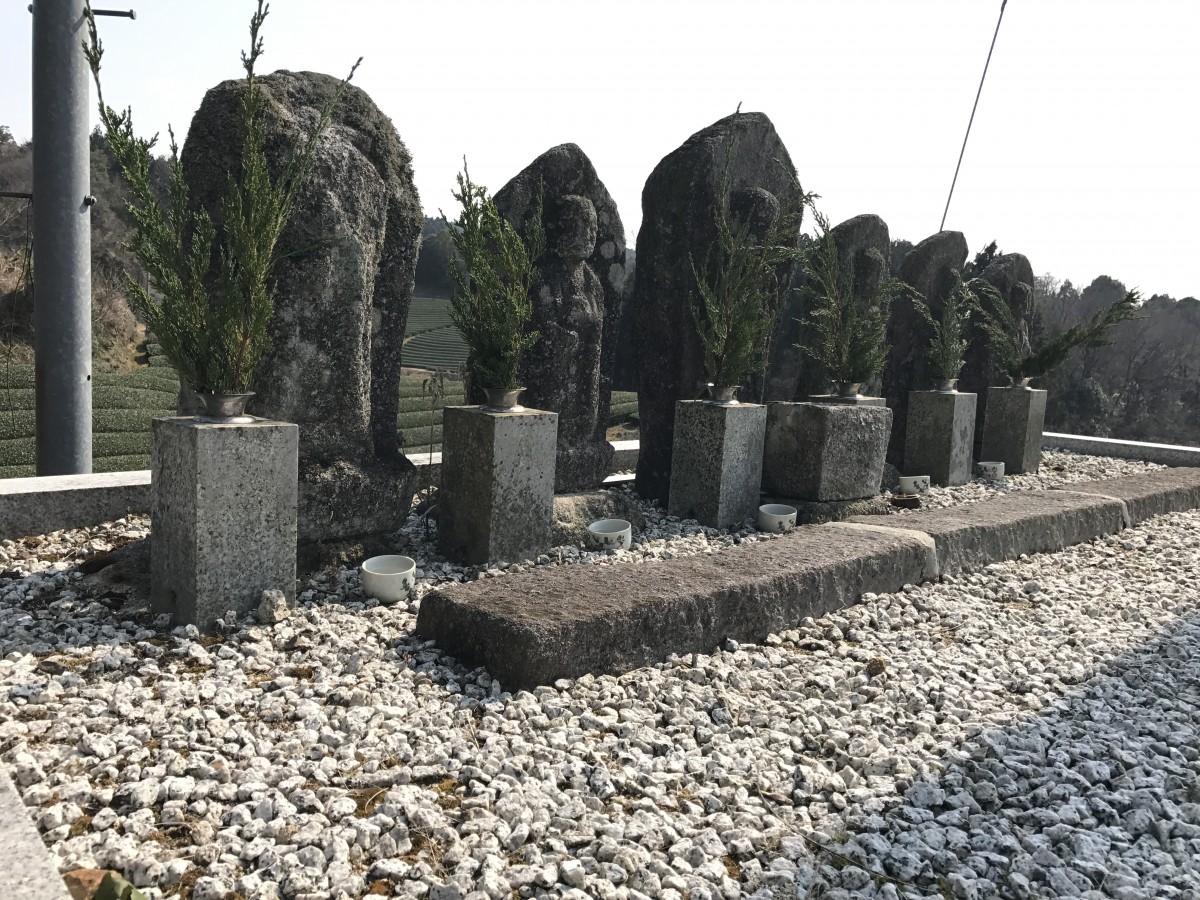 In Buddhism, Jizo is a boddhisatva (Kshitigarbha in Sanskrit) that has vowed to care for the beings in the present, after Buddha entered nirvana, and before Miroku, the buddha of the future comes. Jizo’s name can be translated as “Earth Womb,” and he is the patron diety of children. In Japan, jizo statues are associated with guiding the lost, including the spirits of miscarried or aborted infants.

When Jizo statues are arranged in sets of six, like in the picture above (in front of a Wazuka tea field), they represent guides for each of the six realms of Buddhist cosmology. Those are: the heavenly realm, the realm of titans, the realm of hungry ghosts, the hell realm, the animal realm, and the human realm.

Jubu-zan, the tallest peak in Wazuka, has been a religious location since the Nara period, when monks would come from Nara’s old capital to climb around the peak on pilgrimage. Along the road into town, you can see an 800 year old cliff carving of the boddhisatva Miroku, which was a waypoint along the pilgrimage. Miroku is the boddhisatva of the future, who will come to help everyone to enlightenment when the world ends.

Miroku, along the river and the road on the way into town

In Japan, Buddhism and Shintoism exist side-by-side. Generally speaking, Shintoism deals with the current world, and Buddhism deals with life beyond the mortal lifespan. (Of course this is a gross oversimplification with many exceptions.)

The featured image at the top of this article is a picture of Tenmangu, the shrine next door to the Obubu house. The main deity (there are several others enshrined inside as well) is the spirit of Sugawara no Michizane, who lived from about 845 to 903 CE, in the Heian period. He was an intellectual, a famous poet and politically influential. However, he died in exile, and soon after, a variety of inauspicious events occurred, including plague, drought, and the death of the Emperor’s sons.

To appease Sugawara’s spirit, the first Tenmangu shrine was erected in Kyoto, and they posthumously reinstated his title. Within a century, Sugawara became Tenjin-sama, the deity of scholarly learning, and his shrines are numerous across Japan. Apparently there used to be a school next to the temple grounds of this one. 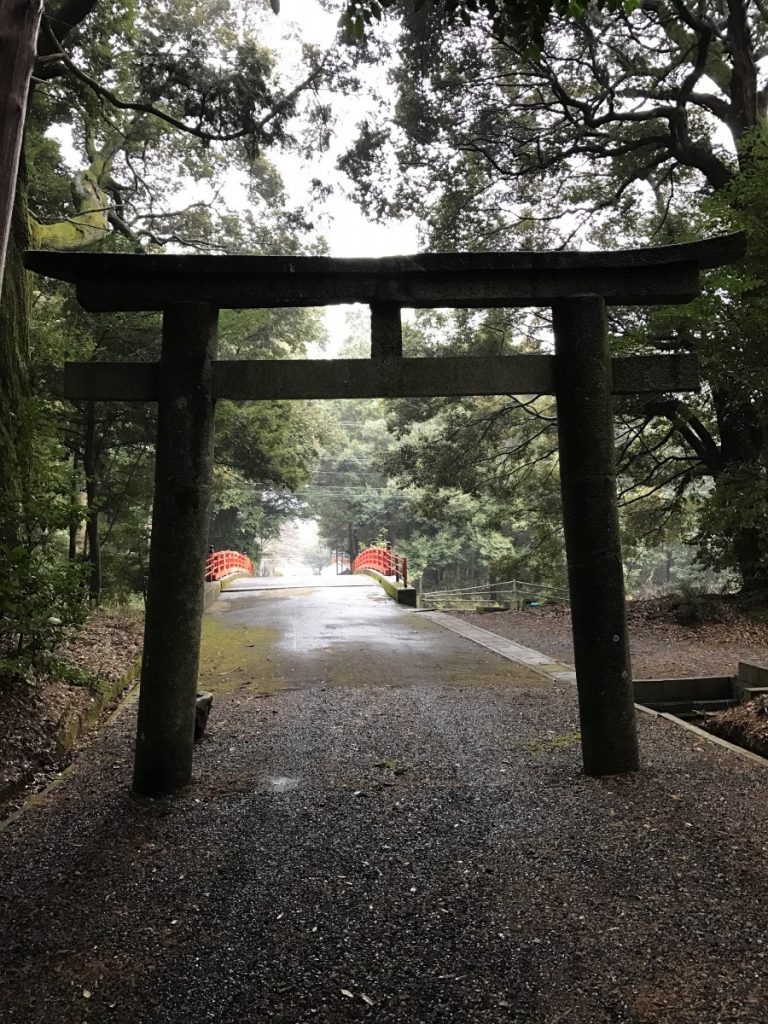 When entering a Shinto shrine, first you pass through a torii gate, which marks the transition to sacred space. Before stepping through, it’s customary to bow. One should also avoid walking up the center line of the path or steps, because that’s where the kami, or deity, is considered to pass by. 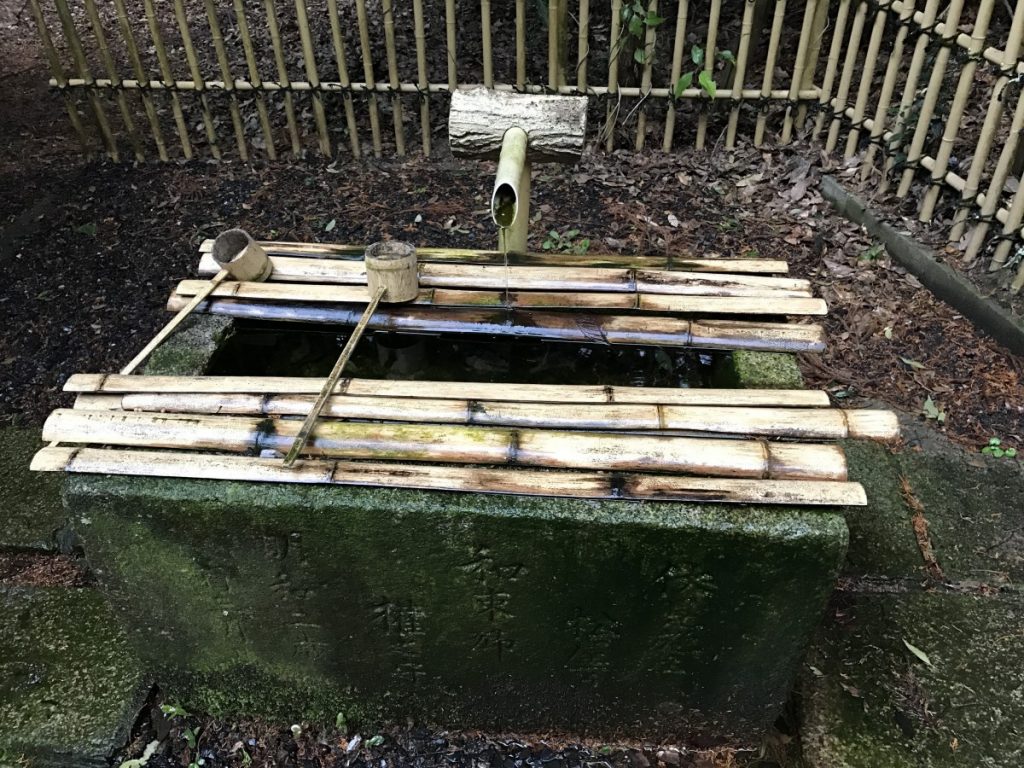 Next, there is usually a basin where you can ritually rinse your hands and mouth, to purify yourself before praying. 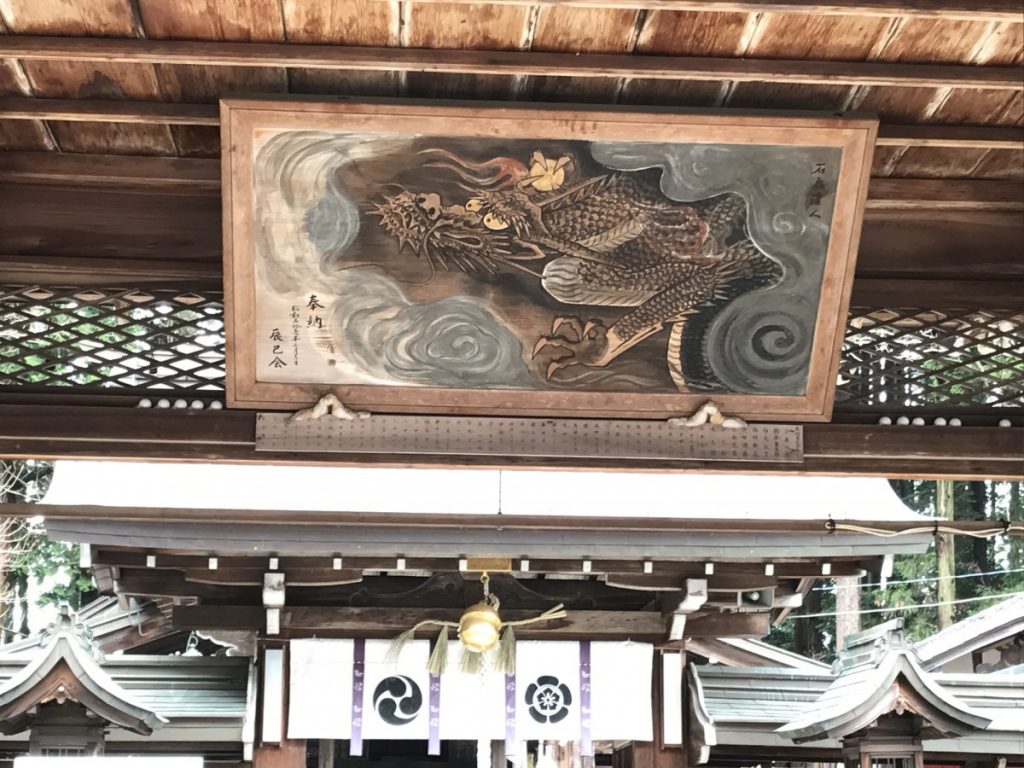 Dragon painting in a shrine in Shigaraki, Kyoto

Wazuka also has an ancient cedar tree, which has been a local guardian since for at least 800 years. The small shrines in front of the tree belong to Susanoo, the god of storms and the sea, and his wife Kushinadahime, who he saved from the eight-headed serpent Orochi. 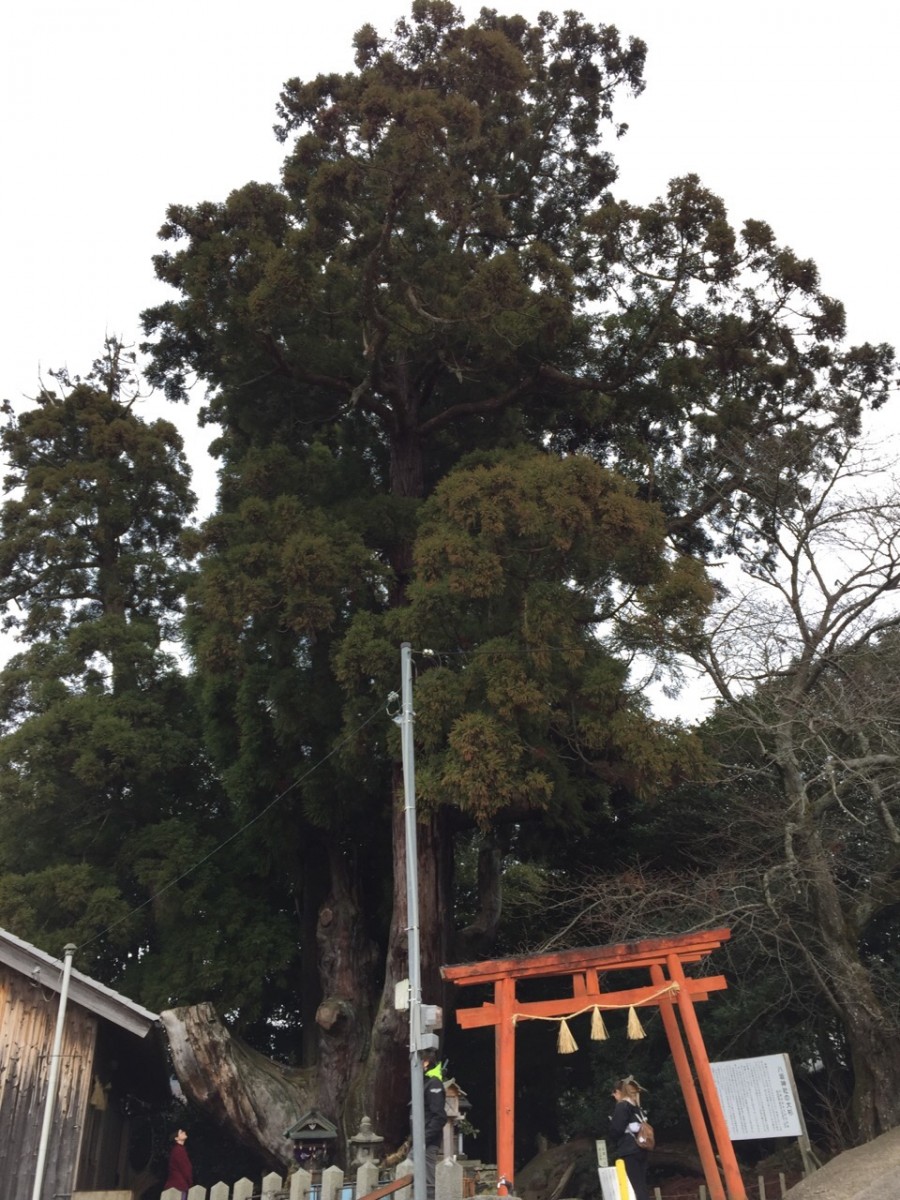 Yasaka shrine, with Susanoo and the ancient cedar. Us interns went with a staff member, to learn about local landmarks.

It’s very rare for a cedar like this to grow so far south in Japan. Apparently this cedar has been struck by lightning countless times, and the old lady who lives across the street from it says that it protects the locals from storms. Maybe this explains the connection with Susanoo.

My favorite shrine in Wazuka is hidden in a quiet neighborhood. I was out on a run one morning, and while chatting with an elderly lady, she told me she walks up to the shrine every morning for exercise, and she recommended I go see. So, with a bit of exploration, I found a path behind a small Buddhist temple. 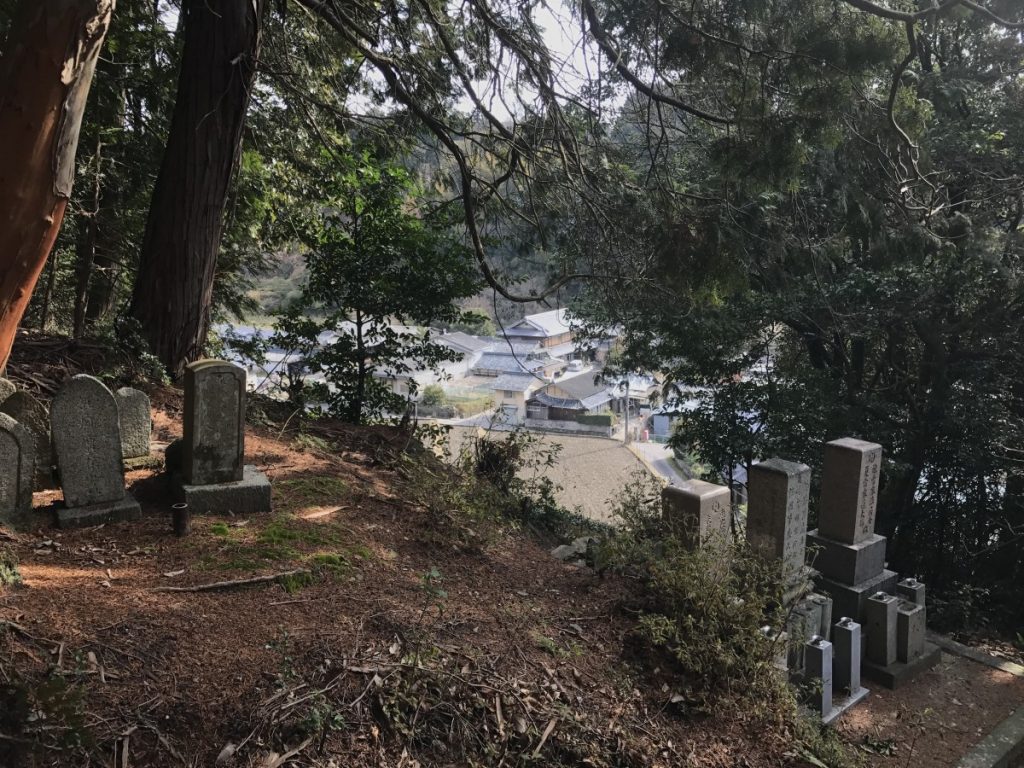 Graves on the hillside. You can see how much I’d climbed already.

Along the path’s many steep switchbacks were graves, some old and worn, some new and sleek. The little clusters seemed to be by family, based on the names. The morning air was quiet except for birdcalls, and the atmosphere felt very solemn. After a while, the path became more steep, and the graves disappeared. 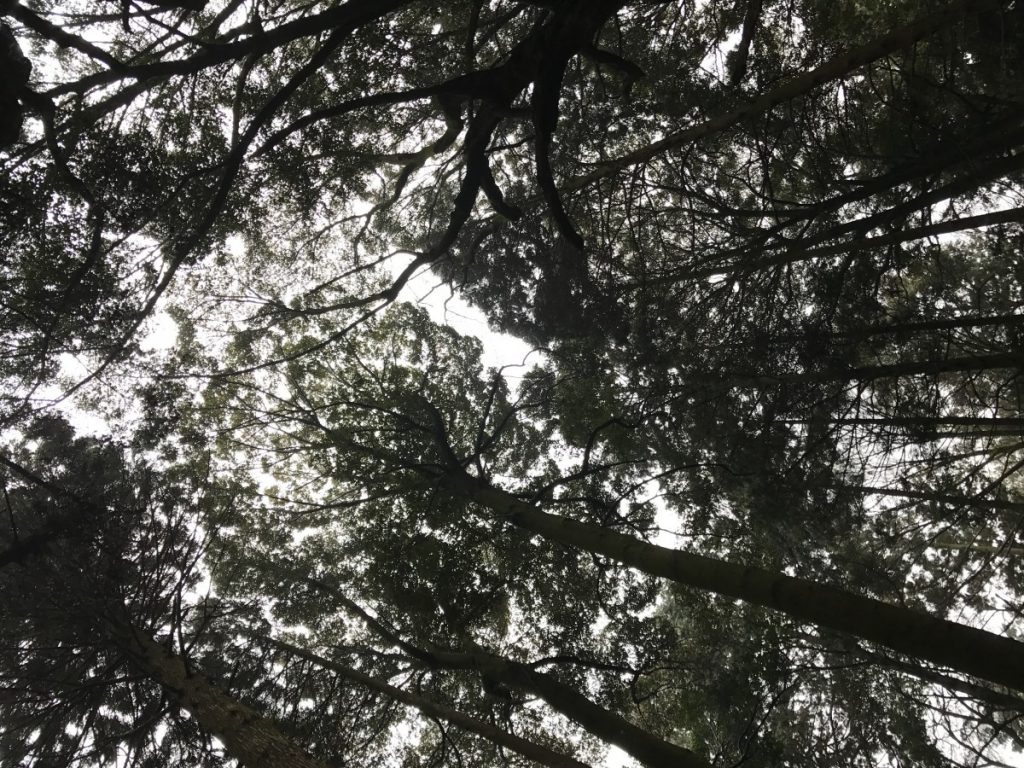 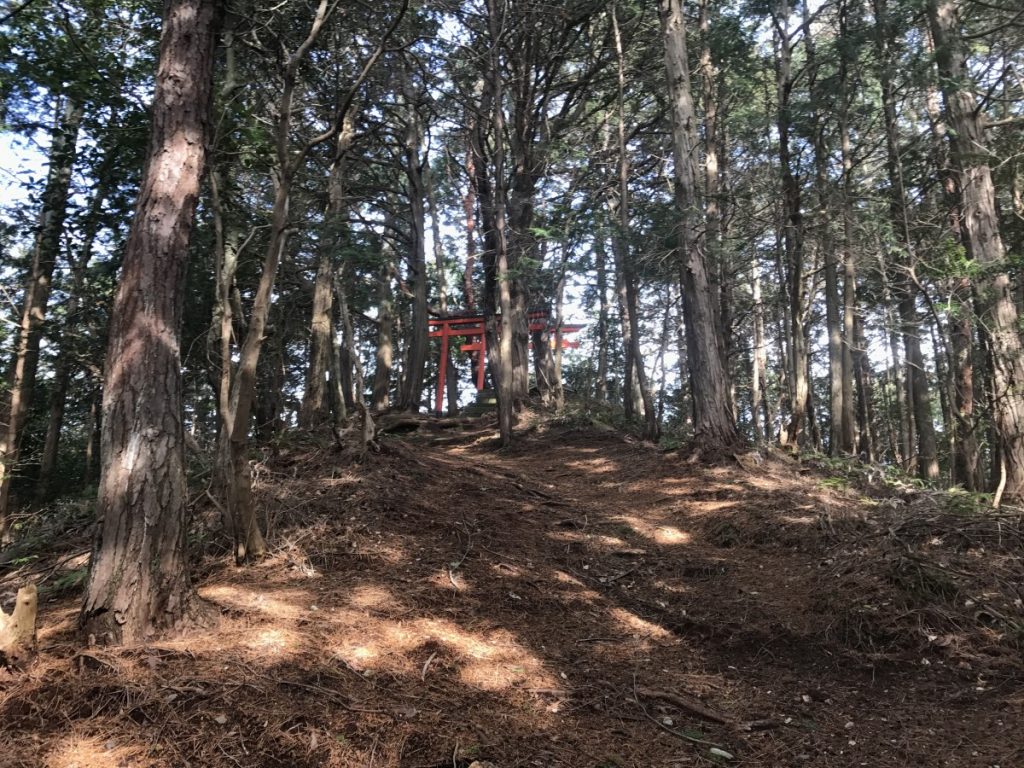 Eventually red torii gates came into view. At the very top of the hill, I found the shrine. With the help of my phone dictionary, I determined that the shrine belongs to Inari, an agricultural deity associated with rice, sake, and tea. With the tea fields fanned out around the back of the small peak, it seemed fitting. Inari is associated with white foxes, which act as messengers, and I spied a small pair of ceramic foxes in the shrine. 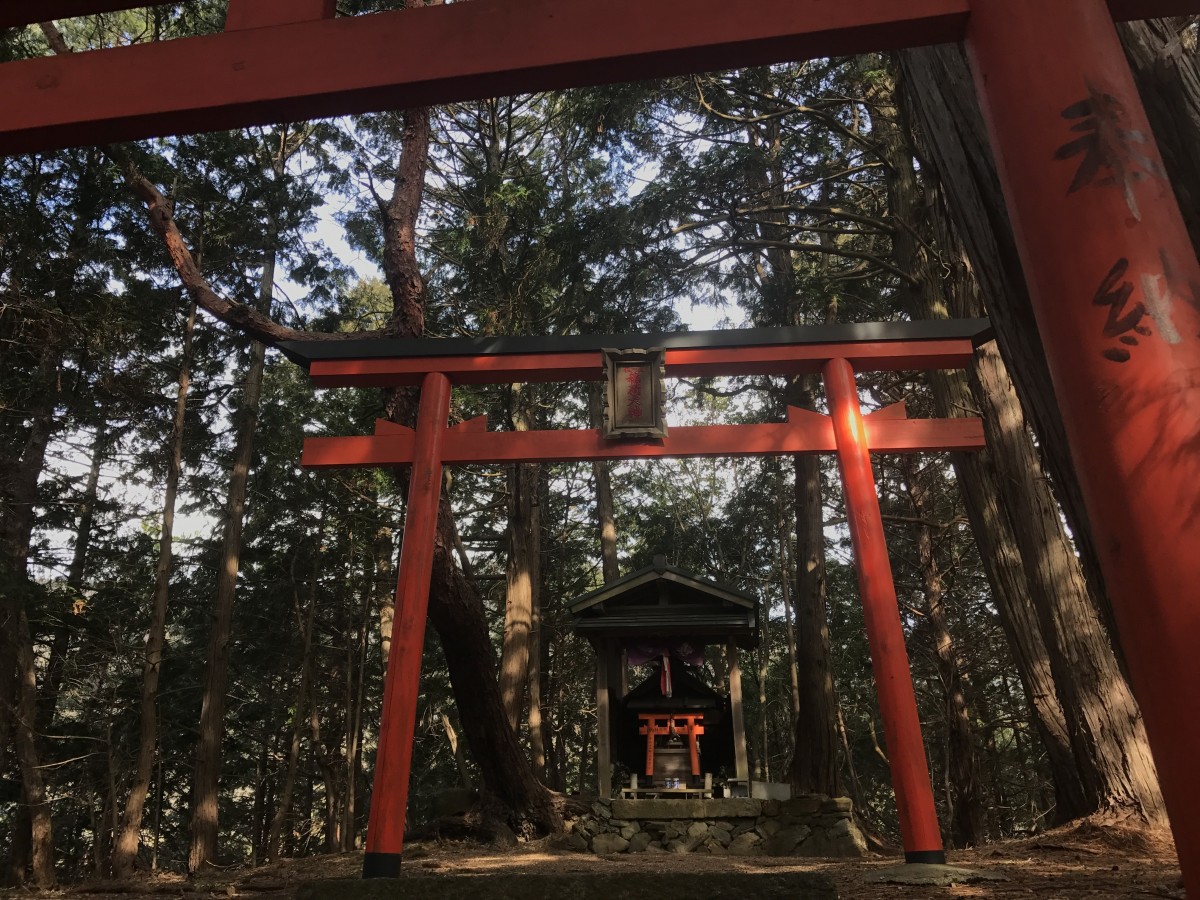 It’s one of my favorite places, and I’ve been back several times. That’s all for today, see you in the next post! 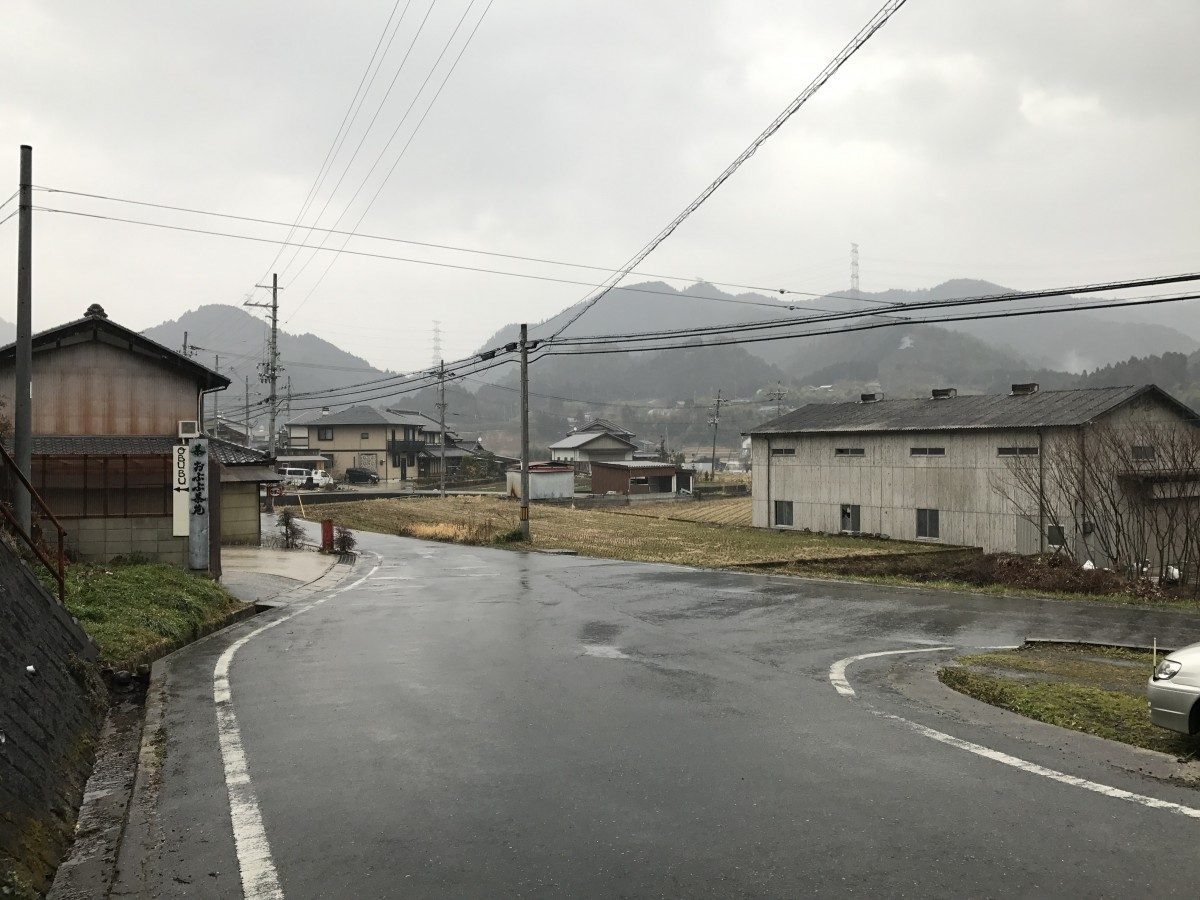 Wazuka may be a sleepy little town, but there’s a lot to see. Early mornings are especially beautiful, before the mist burns off. 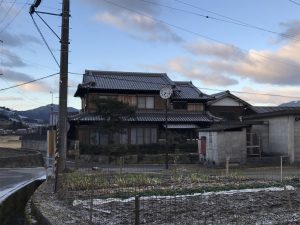 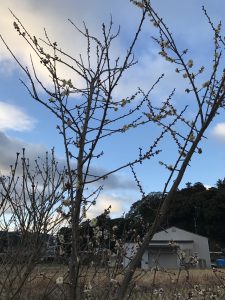 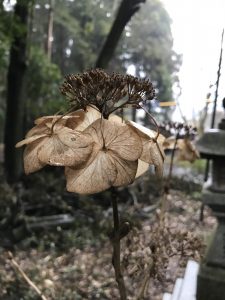 Apparently there are a lot of wild boar in the area, and in February I could often hear gunshots from the mountains. You can buy boar skins and meat on the main road.

There are countless tiny shrines and Buddhist cemeteries scattered around town. 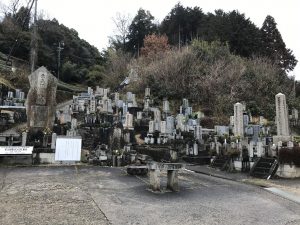 This building, which I think is a warehouse, is right in front of our door. Not sure how old it is, but it looks very traditionally built, from the ceramic tile roof to the walls made of earth and what looks like straw. 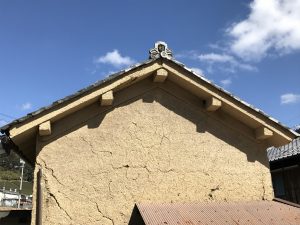 There’s a stream that runs through town, which is lined with cherry blossom trees (not yet blooming). It’s a good place to see birds, of which there are many. I think the bird below is a crane, but I’m not sure… any bird watchers able to help me out? 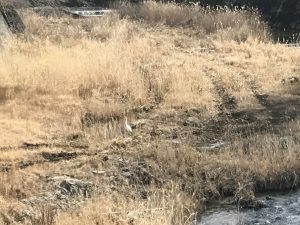 That’s all for now! Most of these pictures are from mid-February, and the scenery has already changed as we’re heading into spring. See you next time! 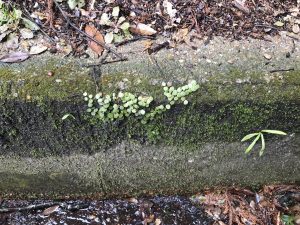 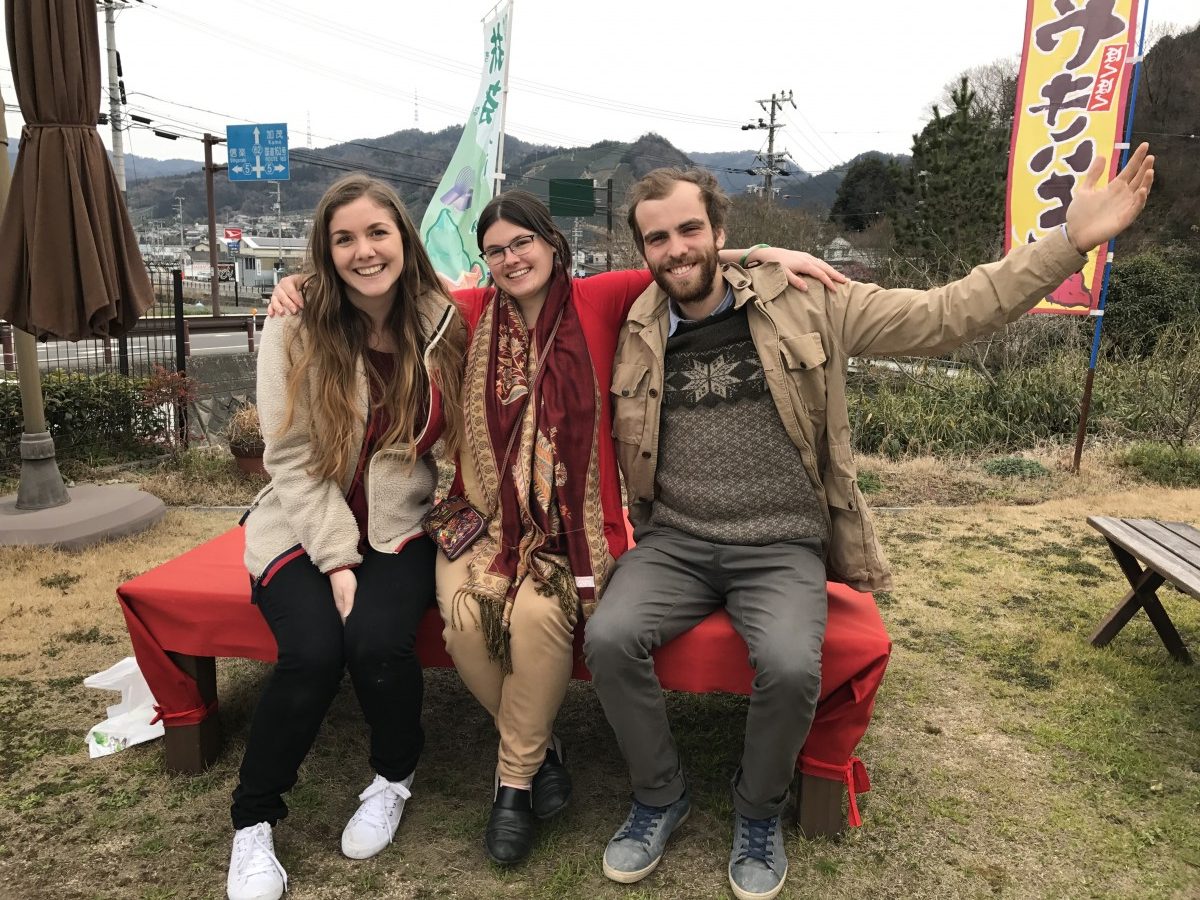 Hey everyone, long time no post! My comparative silence here has been a good thing, promise; I’ve been busy experiencing life here in Wazuka. Today I’m going to share a bit more about life at Chez Obubu!

The picture above is of us interns, hanging out at Yamajin, a local tea shop. We stopped by on a whim, and were welcomed in with friendly conversation. The owner, who chatted with us the whole time, is 74 and has lived in Wazuka his whole life. The tea was, of course, delicious! 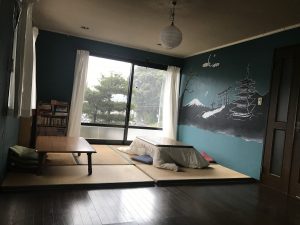 The Obubu house is comfortable and usually quiet. The living room is one of my favorite places to work and hang out. There’s a piano in the dining room, so I spend a lot of my free time figuring out songs I know by ear, and messing around adding chords. (You can see my hand knit socks in the pic below – thanks Mom! <3) 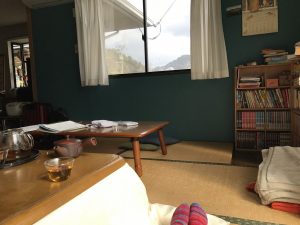 There are tatami (straw) mats in the living room, and in my bedroom. I’m definitely going to miss them when I come home! They make the floor just a bit softer and more springy. They’re convenient for doing exercises like sit-ups, more comfortable than hard-wood. 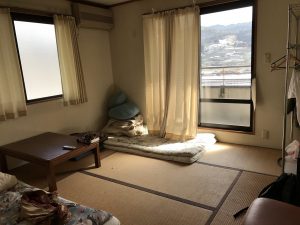 I’ve even got a balcony, which you can see through the sliding door in the picture above. There are mountains and fields of tea and vegetables all around us. There are so many good friends I wish were here to enjoy the beauty with me! I hope you can enjoy vicariously on the blog. 🙂 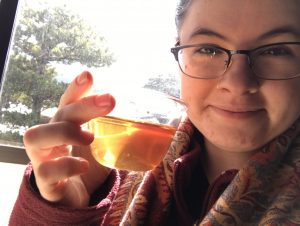 What’s in a Name? Part I: Matcha, Tencha, and Sencha