PORTLAND, Ore. – Les Schwab Tires, one of the preeminent companies in the West and a leader in support of local amateur sports, will be the title sponsor of the Cascade Collegiate Conference “Champions of Character” activities during the 2011-12 academic year, CCC commissioner Dave Haglund announced. 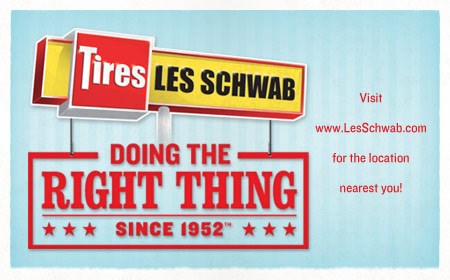 The signature initiative of the NAIA, the mission of Champions of Character is to positively affect the culture of sport through character-driven athletics. Designed to instill an understanding of key character values, the program offers practical tools to equip student-athletes, coaches and parents in modeling these exemplary character traits.

Champions of Character has identified five core values – integrity, respect, responsibility, sportsmanship, and servant leadership – that go well beyond the playing field to the daily decisions of our youth. These character values help young people – and those associated with their development – make good choices in all aspects of their lives and reflect the true spirit of competition.

“We are tremendously pleased to welcome Les Schwab Tires as a major partner of the CCC in support of this important element of our conference and its mission,” said Haglund. “Les Schwab is a natural fit for the CCC and the NAIA. The company has a long and demonstrated history of ‘pride in performance’ and ‘doing the right thing,’ and those are underlying themes of the Champions of Character program.”

Based in Oregon, Washington and Idaho, the CCC’s 10 member institutions are intentional about making the Champions of Character creed a primary focus of their athletic programs. CCC athletic departments help spread the message of the five core values in a variety of ways, including visible displays of sportsmanship, community service by student-athletes and coaches, an emphasis on academic success, public address announcements before every CCC event, and educational efforts built around national championships hosted by the conference office and its members.

In the upcoming academic year, the CCC will host a pair of NAIA championships –men’s and women’s cross country Nov. 19 at Vancouver, Wash., and men’s golf May 22-25 at Salem, Ore. Both events will feature unique Champions of Character activities involving participating NAIA student-athletes reaching out to local elementary and high school students in mentor/mentee situations.