Menu from the 2016 Evans Chair Dinner

Geoduck skins donated by Xihn’s Clam and Oyster House and made into a mask by students Owen Day and Aurora and gifted to Donna Haraway.

Local beans and pork cooked with lavender and rosemary. (photo by Emily Dunn-Wilder)

Guests mingle over a dessert of a layed parsnip and rhubarb crepe cake, woodruff cream with snap peas, and honey milk caramel on pie crust, and Salish Sea Organic Liqueurs in rose and fennel. (photo by Emily Dunn-Wilder)

The faculty of the “Terroir: Chocolate, Oysters, and Other Place-Flavored Foods” program whose students organized the dinner, Sarah Williams, Steve Scheuerell, and Abir Biswas. (photo by Emily Dunn-Wilder)

The Evergreen Farmhouse after a delicious night. (photo by Emily Dunn-Wilder)

by Emily Dunn-Wilder and Annie Sloan

Only at Evergreen do you get a student-designed, seven course farm-to-table dinner that interprets a famous scholar’s academic work through food sourced locally and from alumni-owned businesses.

Annie Sloan, a junior at Evergreen, lead students from the academic program Terroir: Chocolate, Oysters, and Other Place-Flavored Foods in planning and executing a seven-course dinner for Dr. Donna Haraway. Distinguished Professor Emerita at University of California, Haraway was this year’s Daniel J. Evans Chair Lecturer in Liberal Arts and was invited to Evergreen to speak as part of the Anthropocene Lecture Series.

Instead of treating the Evans Chair to dinner at a fancy restaurant in downtown Olympia as is tradition, former student of Dr. Haraway and Evergreen faculty member Sarah Williams proposed a student-led dinner of locally sourced food hosted at Evergreen’s Organic Farm.

President George Bridges was in attendance to help student Armando DeLao and graduate Maxwell Cohen shuck the Totten Inlet and Samish Bay oysters purchased from Son of A Beach Shellfish Farm and Taylor Shellfish Farms. The oysters were served with a tapioca pearl mignonette. 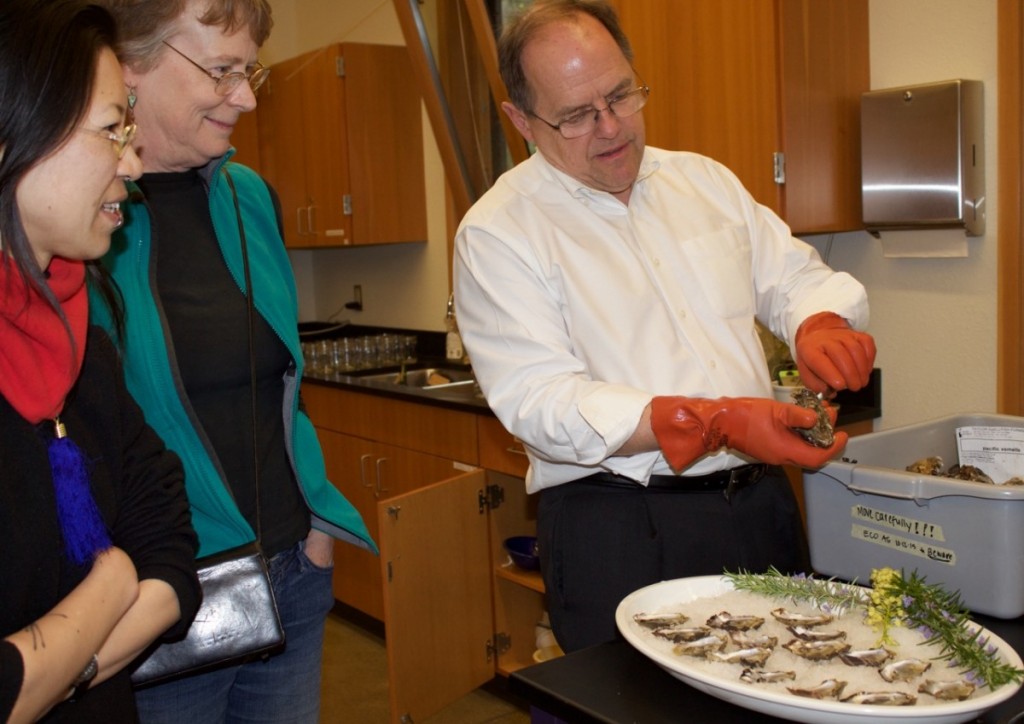 Each course was  based on a quote or concept from Dr. Haraway’s extensive work. Student Annie Sloan said, “I read A Cyborg Manifesto in 2009 and it blew me away. I link almost everything I read to feminism and food, but Haraway changed the way I viewed both. I even wrote a paper about the consumption of women and food and attached quotes from her to it. When Sarah asked me to do the dinner, I didn’t start thinking about local farms or composed dishes, I thought about Donna’s figurations. Donna’s work became dishes in my mind.” 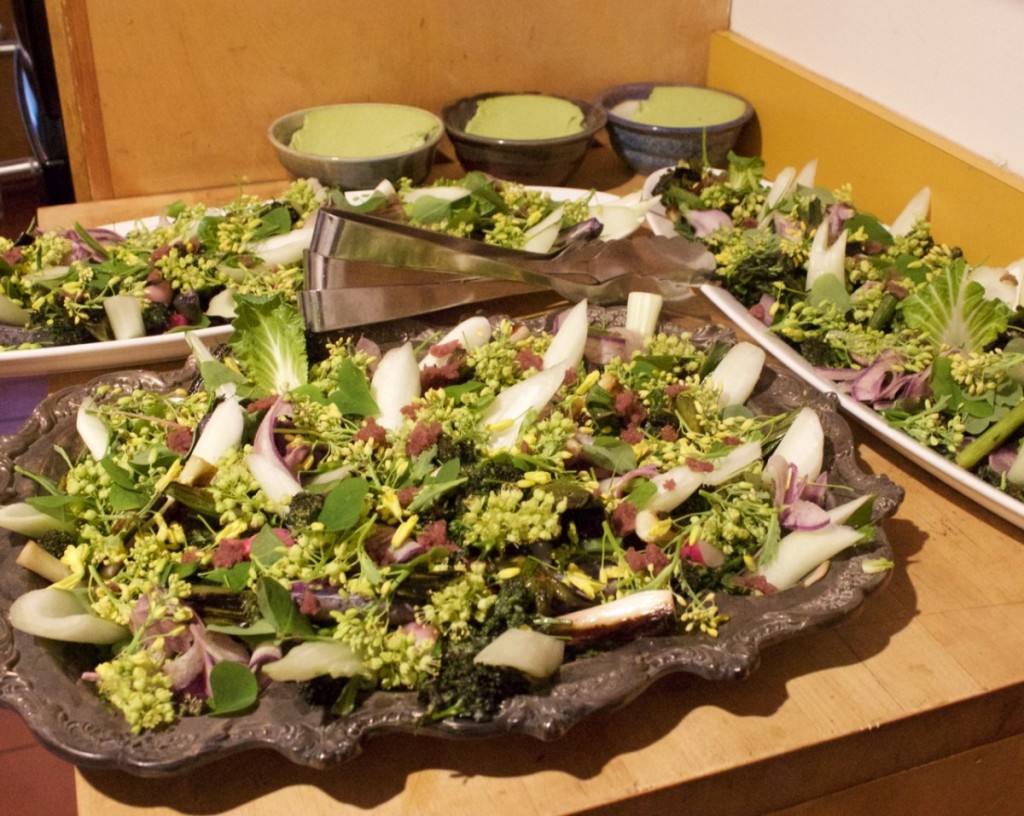 The fourth course, Pork and Beans based on the quote “There is only one jarring note in the scene of the female representative of man alone in the Garden-she eats a spare dinner of pork and beans from a tinned can.” (Primate Visions by Dr. Haraway) The beans were slow-cooked with lavender, rosemary, and pork from Evergreen graduate Evan Mulvaney’sHidden River Farms in Montesano. 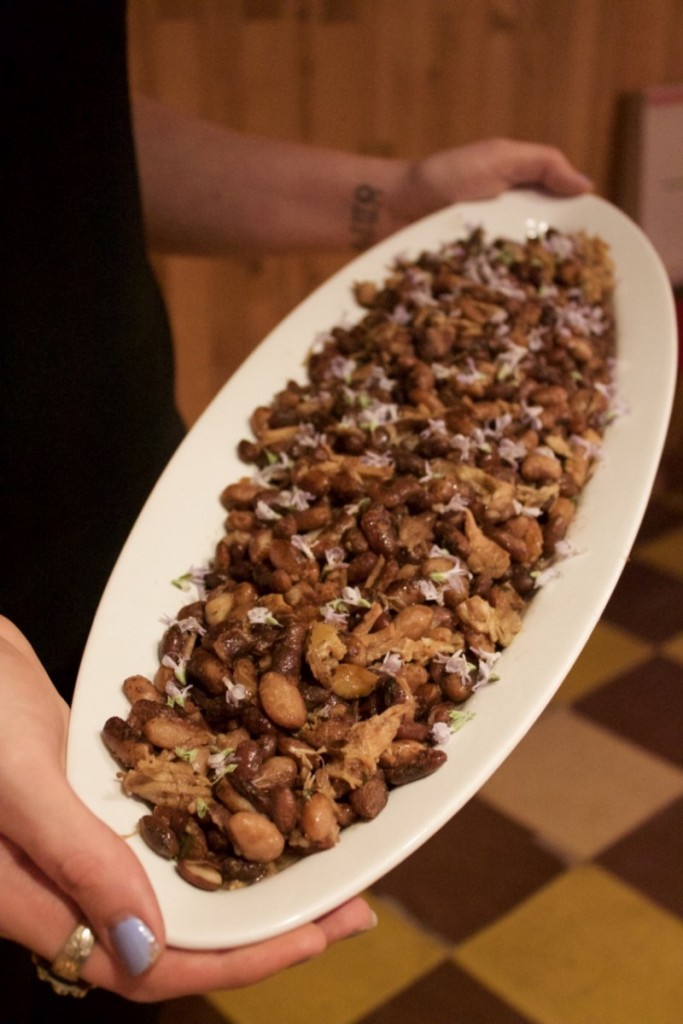 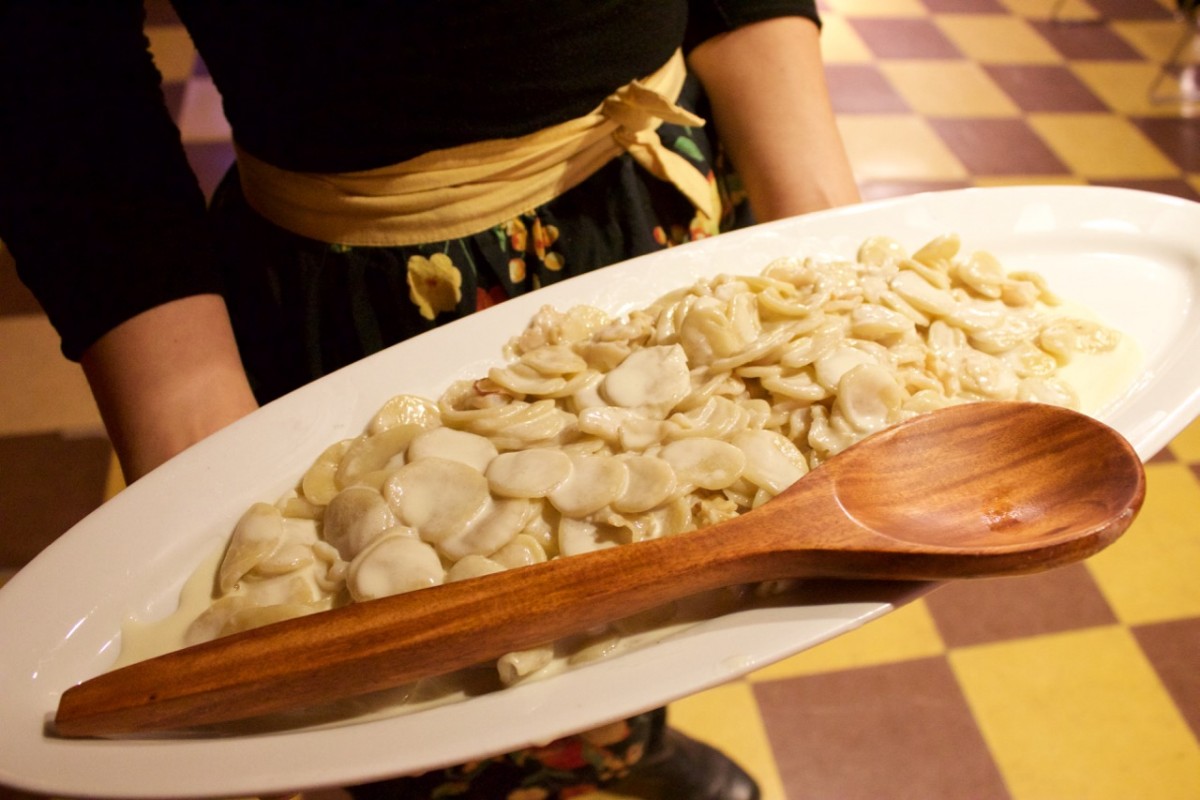 As always, the geoduck mascot was featured, both in a course entitled Companion Species, and in a mask gifted to Dr. Haraway. The mask was made from geoduck skins donated by Taylor Shellfish’s Xihn’s Oyster House in Shelton, which were crafted and molded using leather-tanning techniques by students Owen Day and Aurora Sonenshin. The geoduck mask inspired the graphic on the dinner menus, drawn in ink and lung tincture by Annie Sloan. 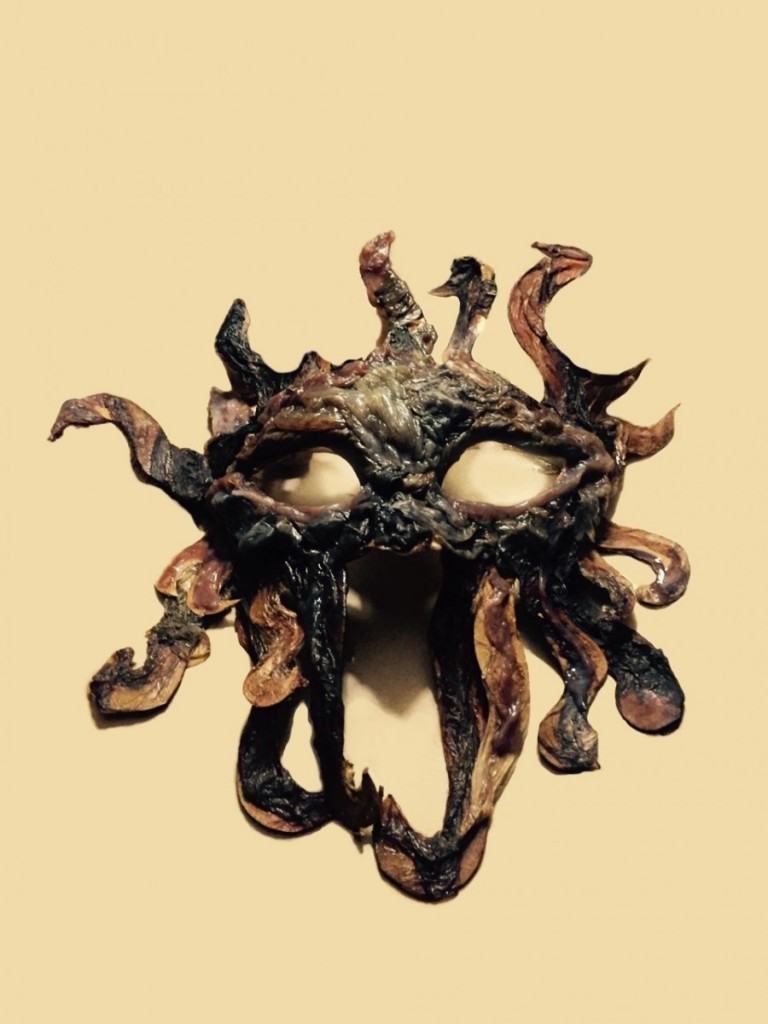