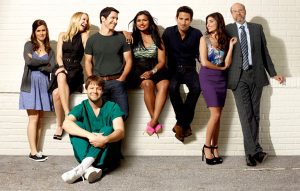 I’ve been watching The Mindy Project recently. I started it before Zahara mentioned it in her presentation on South Asians, and for some reason I’ve continued to watch it. While I want to give Mindy Kaling compassion because she is a beacon of female South Asian representation in media, I honestly have so many complaints about her show.

First, she is one of the only people of color in the show, besides Tamara, who doesn’t come in until the second season. She is constantly surrounded by white co-workers, love interests and friends. The lack of diversity places her, the star, as the token person of color for the majority of the show. Not to mention that most of the white male characters are also sexist, an archetype you’d think we have enough of in media by now.

She’s constantly using her “person of color status” as the punchline to jokes in ways that set negative examples for anyone who watches the show. She makes comments where the only reference to her being a woman of color is to excuse her from some sticky situation she might be in, where she only becomes a person of color when it’s convenient for her. In these, she denies her privilege as a successful women of color with access to education and other resources. Her “person of color excuse” is also inappropriate because she is technically appropriating other people’s struggles and pretending they’re her own in order to gain sympathy.

She consistently says problematic things and sometimes they’re met with resistance from her white coworkers, but that’s as much air time as they get. There’s never any explanation into why the things she says are problematic, there are very little moral lessons regarding race, and she never seems to realize or care about why they are problematic. Even when moral lessons come up in episodes, the small comments are allowed to slide by. While jokes are often ruined if they’re explained, racial jokes, in my opinion, can’t just be left hanging for the audience to figure out on their own, especially in this social climate. Media is almost always taken at face value, information seeping into the brain implicitly and explicitly. Almost every interaction in this show perpetuates racial stereotypes and biases. And I don’t trust consumers to understand that so the responsibility then falls on the show producers.

Along with this, any other racial jokes that are made are completely inappropriate and have the same effect on an audience. In one episode, she makes a comment on black music making people more violent. Although her boyfriend reacts briefly to this comment, its problematic qualities go right over her head and no further mention of how this encourages negative perceptions of black people is mentioned. There are many more jokes made like this throughout the show. This speaks to the internalized prejudice that everyone has within them, and the specific anti-black sentiments that a lot of Asian cultures hold because of white supremacist conditioning. Not only does she make these jokes in the first place, she also makes it okay to say them because people seem to need only one person of color’s stamp of approval on something before it’s deemed okay to say.

She’s a feminist, but she seems to forget that feminism intersects with race. She is a strong female character that doesn’t take shit from anyone. She’s smart in her field of study. She is who she is and if someone doesn’t accept her, then she does a good job telling them off or ignoring them. This is one of the only aspects that I enjoy about the show. However it also allows all of her prejudice to slide by. Because she’s a strong female character, she can take a stance on that, but when it comes to being a person of color, she has little to say.

Any mention of her Indian ethnicity is made with contempt. She makes it very clear that she dislikes being Indian, that she grew up American and will continue to stay that way. Her internalized racism and colorism is very clear in these moments, where she has learned to assimilate by accepting white culture to the max in exchange for the complete rejection of her own heritage. While this might break some stereotypes people have of Indians being exotic, it also pushes the entire conversation of non-American cultures into a negative margin.

All of her romantic pursuits are white men with no exceptions so far. This continues the theme of her being assimilated. She’s learned to accept white men as the ideal mate, the ultimate beauty standard and the only thing that will bring her to her goal of happiness. Many of them are very problematic as well, which she not surprisingly doesn’t notice. One of them literally says that he’s not a feminist and yet she ignores it and continues to idolize him. Another aspires to be a DJ, appropriating black culture and vernacular in the process. This goes into the complex issue of race and relationships, where race and sex meet an intersection, especially when the couple is biracial and one partner clearly holds more privilege than the other. It’s fine for women to have romantic interests, however when almost every episode is centered around her trying to get a white guy, her other strengths seem to fall to the side. And what does this tell the young people watching her show? That the only goal in life is to find a partner, a common message that’s portrayed in media. And that the best companion is an ignorant white cis male.

She’s constantly fat shaming herself. Having her as representation for people who don’t fit the model beauty standard is amazing. As someone who struggles with weight and body image, I love seeing her on screen. However, her character voices constant displeasure with her “chubbiness,” making it clear that body fat is associated with negativity. This isn’t the type of message that I want to hear, and it’s also another internalization of white beauty standards as the only definition of beautiful.

My view on her show comes from an outside perspective, since I’m not South Asian, so it’s possible that others have a more positive experience with it. And one of the only reasons I’ve held on this long is because I’m hoping it’ll get better. She’s not the only one who perpetuates problematic behavior. I also realize that she probably had to jump through a lot of hoops in order to get her show aired, especially as a woman of color. This might include her decision to choose an all-white cast to surround her. She also faces the issue of being “the first.” As one of the first Indian women I’ve heard of who’s produced her own show like this, she gains the responsibility to “accurately” represent all Indian women (even though I don’t agree with that mentality), and her show is susceptible to heavy critique. If we had a wider representation of South Asians and all of the ethnicities within that umbrella term, her show wouldn’t hold as much weight as it does now. So really, this critique should also go to white Hollywood and its complicitness in problematic media.