Old growth forest is fairly easily self explained: it is a forest that is old. When a forest ages it accumulates a lot of “ingredients” that make it old growth; high diversity, great size,  and large amounts of coarse woody debris. Old growth forests differ from any other forested ecosystem type in their ability to grow and accumulate a diverse array of plant species over a larger span of time, sometimes up to 1000 years. This makes old growth forests extremely important for global water and nutrient cycling. 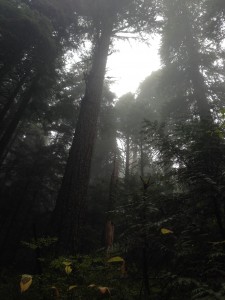 Plant diversity, total cover, species richness, and heterogeneity tend to increase with time, making old growth forests one of the most diverse ecosystems on earth (Halpern & Spies, 920). Old growth forest ecosystems are a valuable place to study and collect lichens and mosses because you will find more than just the successional species and popular edge loving species that do not take hundreds of years to develop. In particular, some lichens species, called cyanolichens due to their association with cyanobacteria, are particularly sensitive to air pollution and can be found in great abundance in old growth forests because of the prisitine air quality.

Another important feature of old growth forests is their continuity. because it is so expansive and without clear-cuts in its protected boundaries, minimizing its amount of edge. Old growth forest edges differentiate from the interiors by:

“reduced stocking density as measured by canopy cover, number of stems per hectare, and basal area, increased growth rates of dominant Douglas-fir (Pseudotsuga menziesii) and western hemlock (Tsuga heterophylla), as calculated by an index of relative growth rate; elevated rates of tree mortality, as measured by standing dead and down trees (snags and logs); and greater numbers of Douglas-fir and western hemlock seedlings” (Chen, Franklin & Spies, 387).

Therefore, the less edge there is in a forest, the less these tendencies will occur and the healthier the forest will be.

Another important aspect of old growth forests that is often overlooked is the fallen remains of trees and other large plants scientifically titled coarse woody debris (Harmon & Hua, 609). Dead trees may remain for centuries, making them a key factor in old growth forest ecosystems. As they decompose, logs and other wood effectively “reduce erosion and affect soil development, store nutrients and water, provide a source of energy and nutrient flow, serve as seed beds, and provide habitat for decomposers and heterotrophs” (Harmon & Hua, 609). Something also often overlooked about coarse woody debris is that it is a key contributor to the storage of carbon. Fallen logs and branches are one of the best places to find bryophytes and lichens in any forest, so the more woody debris a forest has, the better it will be for discovering more species. 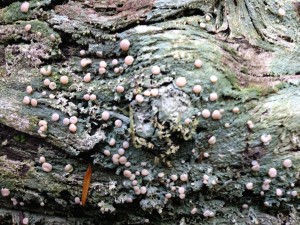 Without old growth forests like Opal Creek we would not have as diverse areas as we do now. It is extremely important to preserve and study these areas and keep them as pristine and undisturbed as possible.

And now I will share with you some of the diversity of lichens species that we discovered at Opal Creek. My favorite group of lichens to study are the charismatic Cladonia’s. These species can often be recognized by they goblet shaped cups and their brightly colored reproductive structures, termed apothecia. It was interesting to see Cladonia species growing on substrates that I would never have expected, such as on old railroad ties from when the site was used for mining. 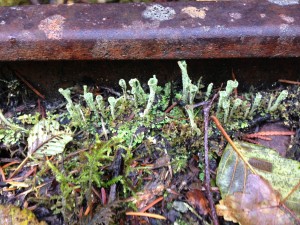 By working together and visiting multiple sites, my group members and I were able to collect and key many species of Cladonia, some not on the existing annotated checklist for The Opal Creek Wilderness.

A list of the Cladonia  species we found include:

All of these species were collected and keyed by students and will be put deposited as voucher specimens in the Evergreen Herbarium. By doing this work we are contributing to our understanding of the distribution and diversity of bryophyte and lichens found within the Opal Creek Wilderness.

Without old growth forests like the Opal Creek Wilderness, we would not have as diverse areas as we do now. It is extremely important to preserve and study these areas and keep them as pristine and undisturbed as possible.