Let the Search Begin: Targeted Collecting and the Results

It has been noted that many species of lichens and bryophytes are hypersensitive to the effects of pollution; particularly through air quality and watersheds (Gilbert, 606). Upon arriving at the site it was clear Opal Creek had a pristine environment in which vegetation flourished and a mass amount of diversity could be found (especially in comparison to the Evergreen Woods found back at school). Abandoned mining equipment and vehicles scattered throughout the area interestingly served as great platforms for the growth of a diverse range of bryophytes and lichens. Our class was divided into groups to most effectively attempt to complete an annotated  checklist of known bryophytes and lichens within the region. 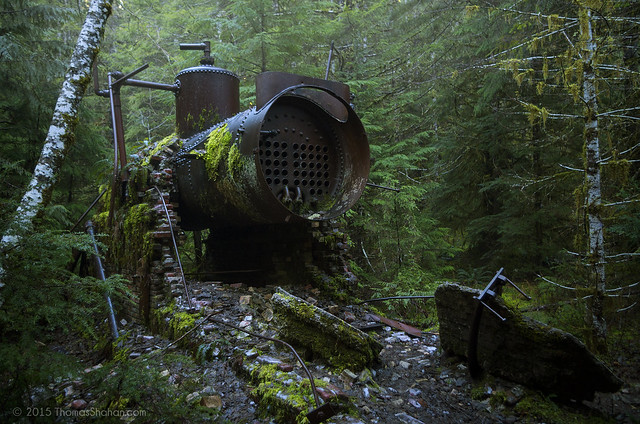 The search proved to be difficult as several species required very specific conditions in which they could thrive, such as Leptogium rivale, a lichen that can only be found in streams that have little natural disturbances and remain unpolluted (Stone, 2). Other specimens simply were unavailable due to the season, specifically the hornworts. The location had several different microhabitats in which we could explore; a montane region that had several abandoned mines that followed Battle Ax Creek, the high elevations at the summit of Mount Whetstone, and lastly a rocky trail that led to Cedar flats . Due to limited time at the site, our groups had to decide which area would yield the most intended species to complete our portions of the checklist. 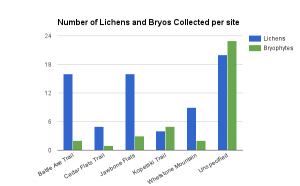 Figure 1:This graph displays where successfully identified specimens were collected for both bryophytes and lichens. It should be noted that unidentified lichens were worked on back in the labs at school, making their numbers higher than the bryophytes.

My group surveyed the Battle Ax Creek region for a variety of lichen from the genus Peltigera and a number of different types of leafy liverworts. This area was ideal as there were many rocky cliff edges cut out for the construction of the mines. This made for perfect grounds for the Peltigera, as several of them thrive in disturbed, rocky, moist areas (McCune, 234). For the liverworts, this offered a large flow of groundwater and they are found in extremely wet areas. In the end the class identified over 112 different samples and had a large remainder of unidentified collections transported back to the school labs for further examination. Some of our samples had previously never been identified on site which means we were able to contribute several new species to the checklist!

O.L. Gilbert. “Further Studies on the Effect of Sulfur Dioxide on Lichens and Bryophytes.” Department of Botany,  The University, Newcastle upon Tyne, 20 Oct 1969.