Culture is formed through the co-evolution between social and ecological factors that determine what is needed for survival, and what is desired for pleasure. Through tradition people develop personal relationships with different commodities that serve for both satiation and enjoyment. This relationship also includes the containers they are sold in, and the vessels that they are consumed in. I am fascinated by how the physiological and psychological effects of each commodity inspire different cultural practices. Commodities, the plants that create them, and the containers that people use to consume them, in the United States and abroad, inspire the following pieces of artwork I designed. 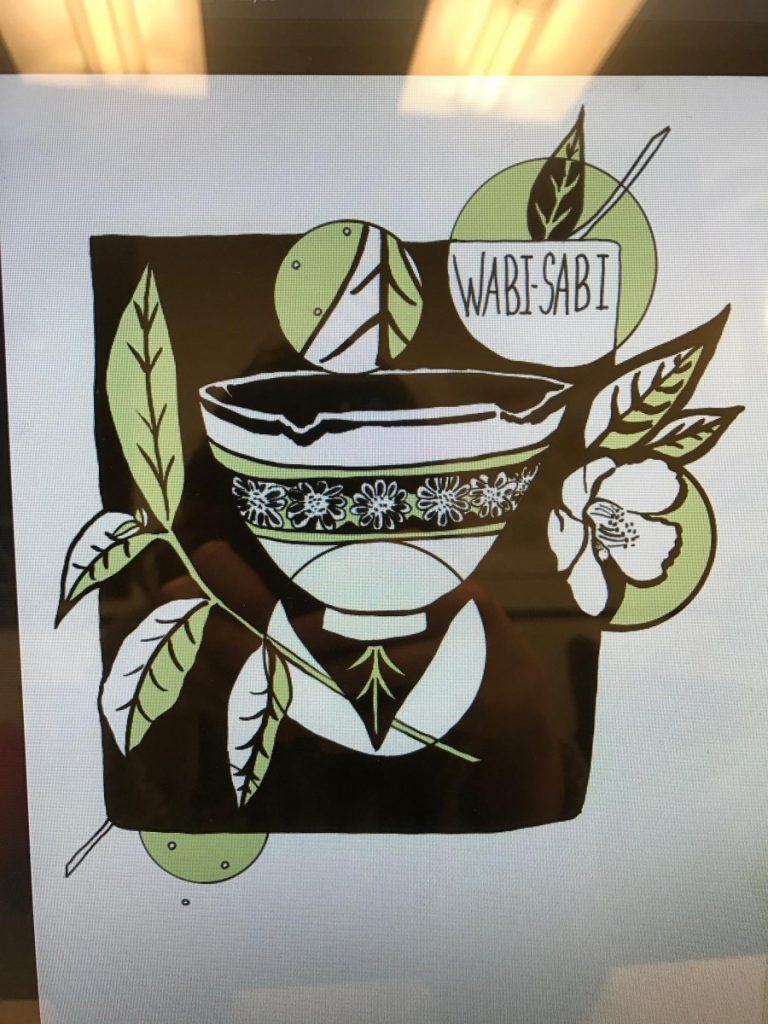 The first print is of the tea plant, Camellia sinensis. The empty teacup has a chip to represent, and accompany, the Japanese phrase, Wabi Sabi. Wabi Sabi is a concept in traditional Japanese aesthetics that relates to a philosophy centered on the acceptance of transience and imperfection; it also celebrates beauty that is perfectly imperfect. The philosophy is derived from the Buddhist teaching of the three marks of existence: impermanence, suffering, and emptiness or absence of self-nature. I wanted to create a visual representation of the commodity (tea), the container (the tea cup) and the philosophy (Wabi Sabi) and how it represents the culture created around tea ware in Japan.

I wonder if the buddhist teachings and philosophy shaped the way tea is consumed and how it makes one feel, or if the way tea makes one feel influenced buddhist teachings. This mirrors my big ah-ha! moment toward the end of my ILC, which was that the social rituals connected to tea consumption is just as important, if not more important, than the chemicals that are being consumed and are usually labeled as the source of effecting ones physiology and consciousness.

The type of tea ware and the way a tea is steeped can influence whether or not a tea will produce ill, neutral, or positive effects. I also believe the size of the tea cup influences the experience; one is inspired to sip and savor the tea because of the small amount of liquid offered. The structure of tea cup and the behavior of  savoring of the tea also influences the pace of ones thought process and how we connect with others. I think it is easy to hide behind a large mug and not have a desire, or need, to interact with others. With a smaller cup, ones cup is empty sooner than later. With the Chinese form of preparing and consuming tea you’re consistently preparing your tea fresh and refilling your cup, or being served. There is a level of consciousness that needs to be there to continue the experience, alone or with company. The tea master needs to be attentive to the people around them, notice if their cup is empty, share the smell of the tea leaves in between steepings, and wash and warm their cup before and in-between tea tastings.

The act of smelling the tea leaves is not just therapeutic for the volatile compounds one inhales, but also for the act of taking a moment to breathe deeply and to breathe deeply with intention; there is a difference. In our modern day to day lives many people hold their breath or breathe in a shallow manner. I will smell essential oils, not only for their healing qualities, but also for the moment to retrain my muscles and nervous system to breathe deeply again. I think it is important to look at the macro and micro view of any subject or thought one is having, as well as, deconstruct what is the means to an end and what is the real end goal. It is easy to often times get attached to the imagined means to an end, more than the beginning desired end; to such a degree that one can stop at the means in a pacified false end. What I love most about tea is that the chemicals and the social rituals attached to tea culture help me to cultivate an inner focus which, helps me to to develop patterns that lead to a healthy mental and physical homeostasis. It also tends to facilitate conversation, connection, and comfort in a sober environment which, these days is a wonderful and rare experience.

After the wine tasting during week ten I couldn’t help but contrast the experience with the tea tasting workshops. I noticed during the wine tasting that Annie used a very similar format and flow for her workshop (tasting, reflecting on flavor, aroma, and color) and that there was a very different environment created in the classroom. It felt more free, relaxed, a little chaotic, and I noticed people divided around in smaller groups. Granted it was the last day and we were all sleep deprived and exhausted, I also think it  was wine, the presence of alcohol, and the inevitable cultural conditioning that comes with the archetype of alcohol, that changed the energy in the room.  The energy and cultural conditioning connected to wine and the way it is marketed to consumers is usually connected to leisure,  escapism, luxury, and “positive shame”; I can hear someone in my head saying, “Be bad! You deserve a glass or two, or a bottle”.

In comparison to the cultural space we’ve created in the workshops , inspired by “teaism”, which invites  one to hone in, focus and listen, to each other, and to ourselves.  We may become “tea drunk” and lose our inhibitions or become spaced out, but the archetype of the tea itself won’t allow you to become too disassociated. There is no such thing as absolutes, so, depending on the social ritual attached, and which culture you’re experiencing tea in, there are ways to abuse tea. But in my personal experience it is much harder to abuse tea than it is to abuse alcohol. 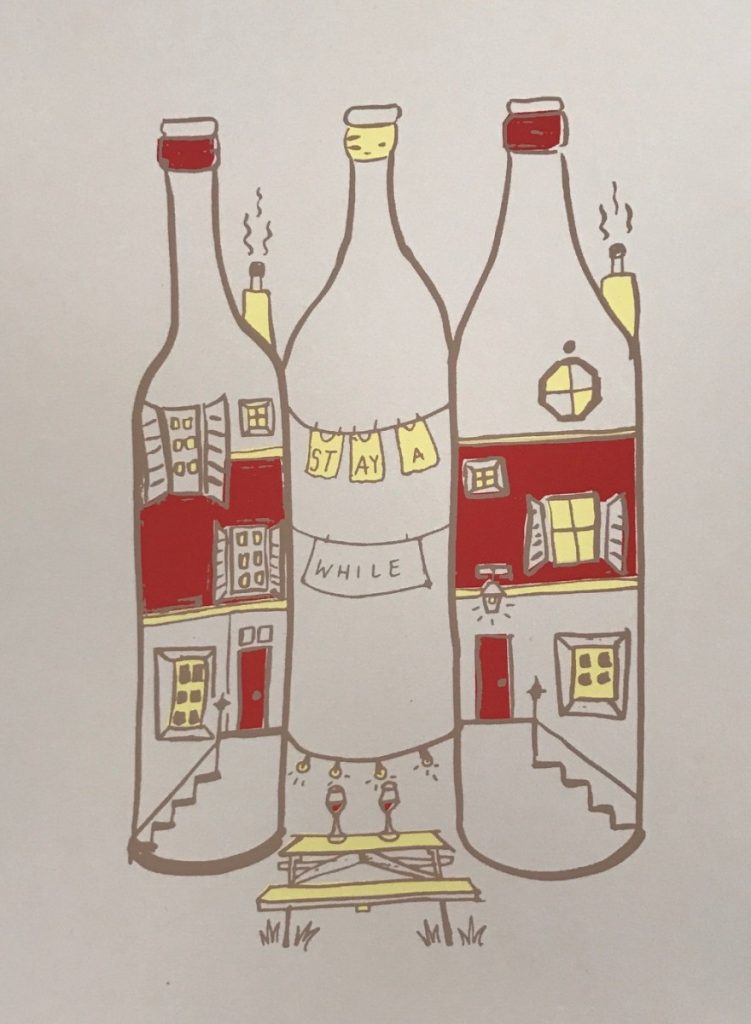 I created this print for my thematic work in my printmaking class. The following is a clip from my artist statement to briefly explain the image. I felt like it would be an interesting image to share and it could maybe share the feelings I have about alcohol better than expanding my essay.

The role alcohol plays in European and American Culture inspired the print above. Humans have co-evolved with grapes and have preserved them as wine for centuries. During a period of time where there was not a lot of technology, like refrigeration or preservatives, to preserve the fruit, calories and nutrition, it was turned into wine. Today wine is celebrated and studied, as well as, consumed for its intoxicating and pleasurable qualities. I wanted to capture in the print the two realities that can occur when people have a close relationship to alcohol. One is that a bottle of wine can represent the heart of a home, hospitality, relaxation, and ancestry. The Second represents how addiction and alcoholism can be seductive and engage one in a simple, subtle, and inviting manner. I chose the title, “For better or for worse”, to represent this dichotomy

It has been a pleasure to learn and grow with y’all!

Hope you have a great Spring break!