Due to their lack of a vascular system, bryophytes have evolved to be able to retain large quantities of water. Their morphology reflects this, as most moss species are low-growing and are in environments where water is readily available. Various moss species have different rates of desiccation (the rate at which they lose water). Our project will look at the specific desiccation rates of Dendroalsia abietina, Polytrichum juniperinum, Rhytidiadelphus triquetrus, and Plagiomnium insigne. Each moss species originates from a different region. This leads to the hypothesis that each will have a different maximum saturation and a different rate of desiccation. We believe the mosses which stem from warmer, drier climates will have a higher maximum saturation and a better ability to retain water than those originating in wetter climates. The morphology and evolution of each moss species leads to its ability to conserve water. Those mosses which originate in moist climates will not require the ability to hold on to water for longer periods of time, and so to conserve energy, will lose water faster.

Unlike vascular plants, bryophytes have a different way of keeping themselves from drying out. Instead of having mechanisms that can help them avoid desiccation, bryophytes use different techniques in order to survive through desiccation, a mechanism called desiccation tolerance.1In our project, we are interested in observing the desiccation rates of different moss species which make up most of the bryophyte plant group. In this project we will be looking at four different species: 1) Dendroalsia abietina (mostly located in drier, Mediterranean-like climatic zones), 2) Polytrichum juniperinum (very common in the Pacific Northwest), 3) Rhytidiadelphus triquertus (common in the Pacific Northwest) and 4) Plagiomnium insigne (moist, shaded lowland areas).2 We are expecting different desiccation rates depending on the region these mosses come from.

Moss Rehydration: Dry moss will absorb water like a sponge.

The experiment will compare the rates of desiccation of four different moss species and the amount of water each will hold after a given amount of time. To start, we gathered the materials needed for the experiment  ( weight sensitive scales, camera, tripod, at least four beakers, variety of completely dried moss, humidity detector, four petri dishes, painter’s tape, four batteries + extra if needed).  We set up a table in a notebook or on a piece a paper with a column for the various moss species and separate ones for the marked time each moss mass will be recorded again and photographed (0,10,15). We then used the tape as a marker for where the tripod will be when it’s time to photograph each sample. This will keep the picture movement minimal when its later put together in a time lapse. The angle of the camera should be set and unchanged throughout each picture. The amount of water, moss, tripod placement/ camera angle served as controls. We placed the petri dishes on the scale and tared their weight, and 0.41g of each sample was weighed on the petri dish. After each moss was tailored to the same weight, they were then submerged in separate beakers filled with 400mL of water each. Each was left to sit for 30 minutes* in the beaker to reach maximum saturation . Once the thirty minutes were up and each moss had reached maximum saturation, we took the mosses out of their beakers and shook them to remove any excess water**. The samples were subsequently placed on their respective petri dishes and their initial mass was recorded, as well as a picture taken. After 15 minutes, their mass was recorded and another picture was taken; this step was repeated in intervals of 15 minutes. When weighed, the data collected will be used to compare their original wet weight with their new dry weight. This will give us an idea of how long each moss is able to retain its moisture.

*This might have affected the data, letting them soak for an hour might be more beneficial  for the experiment and its results.

**It doesn’t have to be the same person shaking them, but having the same hand like a control helps.

Table 1: Time versus the weight of each moss sample taken at intervals of 15 minutes. 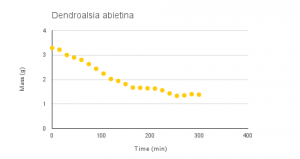 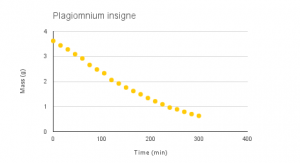 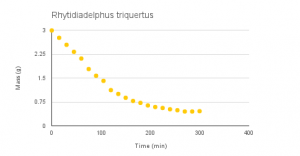 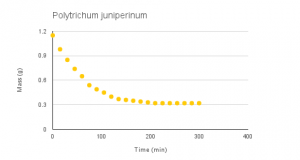 The experimental desiccation rates shown above (Graphs 1-4, Table 1) display a clear downward trend. Because each sample began at an original dry weight of 0.41g, the graphs also display how quickly each moss sample was able to absorb water, or their maximum saturation level. Plagiomnium insigne had the highest maximum saturation at 3.62g wet weight, while Polytrichum juniperinum had the lowest at 1.15g.

Although each graph shows a clear downward trend, each moss species had a different overall desiccation rate; these are shown in the slopes of each graph:

Plagiomnium insigne, which is generally found in humid coastal environments, had the highest overall decrease in weight and the highest maximum saturation. Polytrichum juniperinum, which can be found on every continent, had the lowest maximum saturation and the lowest overall decrease in weight. This implies that region is not the only factor that affects the moss’s ability to hold and retain water. While the mosses from moist climates lost water faster, their maximum saturation was also higher than those from dryer climates.

However, we feel that our hypothesis did not fully encompass what was happening during the desiccation of these mosses. Besides the climate and region, the morphology of the mosses was a determining factor in the rate at which they desiccated.

The first sample, Dendroalsia abietina, is a moss that is located in drier, Mediterranean-like climatic zones.2 An important factor of its morphology is that it is epiphytic, meaning it grows harmlessly on another plant, which in this case, is a tree. Epiphytic bryophytes that reside on branches or the forest canopy are known for being more tolerant of rapid and frequent drying and severe desiccation.3 This was reflected in the data collected. The graph for this sample shows an overall downward trend but unlike the other samples has slight but obvious fluctuations when it’s weight dropped around a little over 1 gram. We believe these fluctuations represent the mosses ability to retain its water capacity.

The second sample, Rhytidiadelphus triquertus, is a common, ground-dwelling moss in montane areas of the Pacific Northwest.2 Rhytidiadelphus triquertus is a type of moss that is known to be endohydric. Endohydric mosses do not only transport water externally, but also through an internal conducting system that brings water from the substrate beneath them to the tips of their leaves.1 Rhytidiadelphus was the second to last species that had the lowest water retention rate. The data for Rhytidiadelphus showed fluctuations near the end and it wasn’t clear if this was some slight irregularity or if it was reaching equilibrium.

The third sample, Plagiomnium insigne, is a moss that is located in very moist, shaded areas of lowland forests in the Pacific Northwest.2 Plagiomnium was another endohydric moss in the study.   was noted for having the lowest water retention rate out of all the samples that were in the experiment. The graph for Plagiomnium clearly showed a downward trend with no indication of whether it would level off or reach equilibrium. We believe this has to do with the areas in which it thrives which are moist, shaded areas. We believe that if Plagiomnium has access to water constantly due to its environment then there is no need for it to have a high water retention rate. There have been suggestions that Plagiomnium has a mechanism to assist with water retention which is when it dries its leaves curl and contort themselves in order to hold water against the stem and the leaves1 , however, specifics have not been further discussed. Plagiomnium was also the plant that absorbed the most amount of water in the time constraint, we believe this allows the plant when it has a dry period to quickly recover from desiccation once water becomes accessible again.

The last sample, Polytrichum juniperinum, is a common, weedy moss located in Pacific Northwest.2 Polytrichum is another endohydric moss in the study but an interesting feature of this species is that they have special cells known as hydroids and leptoids that conduct food and water separately.1 Polytrichum was the sample that absorbed the least amount of water, and we think the reason for this because Polytrichum is known for being water repellant because of its very waxy cuticles, which makes the uptake of water slower.  We think that Polytrichum benefits more from internal conduction of water rather than external conduction of water.

[2] Pojar, J. and MacKinnon, A., 1994. Plants of the Pacific Northwest coast. Lone Pine, Vancouver, BC.5. A. Vanderpoorten, B. Goffinet, Evolutionary significance of bryophytes. Cambridge University Press. 1-10  (2009)