What Do Plants Do at Night? Understanding Nyctinastic Movement

Do you ever wonder what plants do when we’re not looking? What about when you’re sleeping? Nyctinastic movement, less formally known as sleeping movements, are plant movements that occur in response to darkness. These movements are growth independent, and are a type of circadian rhythm that function on a 24 hour clock. Not much is known about why nyctinastic movement occurs, but it could possible be for protection of the plant. This nyctinastic movement is common in legumes, although existing in other plants, which will be looked at in further detail later on.

The group of M. leuconeura studied in our project

In our group project, we are studying the nyctinastic movement of M. leuconeura under the influence of sound. The first step is to understand what nyctinastic movement occurs in M. leuconeura. The leaves are the site of the movement, moving from their resting angle during the daytime through an arc of 90° to a nearly vertical position (Hill 1960). The upward movement begins around 4 hours before the dark period and reaches their highest point after the light is off. The upward movement, however, is much slower than its downward counterpart. This movement of the leaves from a horizontal position during light hours to a vertical position during dark is what gives M. leuconeura its common name of the prayer plant, in reference to the common hand position during prayer.

Pictured here is the motor organ responsible for nyctinasty, the pulvinus. You can see the swelling due to turgor pressure. (Zavadil V. 2012)

How does it work?

Plants don’t have muscles and tendons to move the leaves around though, so how does this movement occur?  The nyctinastic movement in leaves is all due to something called the pulvinus. The pulvinus is a motor organ at the base of leaves and leaflets. The cells that make up the pulvinus swell and shrink due to turgor pressure in accordance to the circadian clock and create the visible movement in the leaves (Zhou C, Han L, Fu C, etc. 2012). 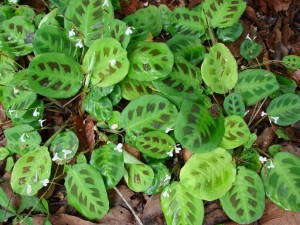 Who else moves at night?

Besides M. leuconeura, there are many other plants that also exhibit nyctinastic movement. The movement of Carica  papaya is the same opening and closing we’ve seen before, where the leaves angle upwards. (Yin H.C. 1941).  Most nyctinastic movement is the closing of the leaves at day and then the repositioning back to horizontal during the night. You can see nyctinastic movements in plants such as Mimosa, Phaseolus, Albizia, Desmodium, and Samanea (Uehlein N, Kaldenhoff R. 2007). The fact that there are so many known plants that have this sleep movement but it isn’t wide spread knowledge makes the experiment more exciting to me.