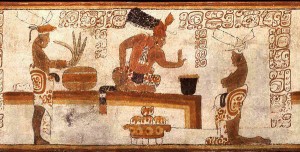 A Late Classic (A.D. 600–800) vase depicts a Maya lord being presented with a bowl of frothing cacao, or chocolate.
http://historum.com/ancient-history/19200-power-chocolate.html

The latin name for cacao Theobroma, this literally means ‘food of the gods’. This gives a valued name to cacao in many South American cultures. The oldest forms of cocoa have been found in Olmeca history as a rich drink, chocolatl. It is said that this community discovered that edible qualities of cacao after seeing rats devouring the fresh fallen fruit. Later the Mayans and Aztecs used this product in sacred events such as marriage proposals and ceremonies. Cocoa production advanced throughout the following decades but remained as a drink for the privileged. In the 16th century the Spanish court became big fans of cocoa. They started adding flavor enhancers such as sugar, vanilla and cinnamon.

In 1585, the first shipment of cacao beans arrived on the Iberian Peninsula and the grand establishment of chocolate was launched in the new world. During the 17th century chocolate beverages began to appear in Europe French and English courts. The first chocolate-confection maker was found in Paris and around 60 years later the Italians became prize winners for their high quality products. In the years leading up to 1800, North America discovered the cocoa wonders and the first chocolate factories began opening around the world. The industrial revolution had the most dramatic effect on chocolate culture. It transformed the rare delicacy into a hot commodity, easily accessible to the public.