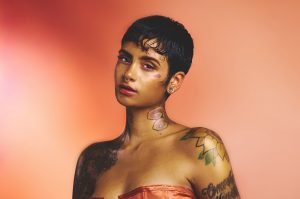 Jhené Aiko and Kehlani are two significant artists in my life. As I am “coming of age” into my new identity as a whole multiethnic person, I think it’s important to find these role models. Not only are they mixed people of color, they are also (intersectionally) strong female musicians.

I’ve been listening to both artists consistently recently. Neither of them mention race as a forefront in their music, however they don’t deny it either. Although I wish they did mention their mixed race a little bit more, so that multiraciality/ethnicity could become part of a larger dialogue, I also appreciate them for the messages they do export.

Jhené is a talented lyricist. In an interview with Rookie Magazine, she talks about her love for creative writing. Celebrities are often seen as one-sided, locked into only one talent and not usually seen as humans with interests similar to everyday people’s. I share her passion for writing and word play. A lot of the titles for her songs and albums show this love too, where the album title “Souled Out” is a play on selling out and revealing her soul through music.

I also love her independence in her refusal to sign to labels that she didn’t feel were right. Her independence and strength is also shown in her music video, While We’re Young. She directs and stars in the video, which takes several popular scenes from the movie, 50 First Dates. When I saw her video, it took me straight back to childhood, watching that movie starring Adam Sandler and Drew Berrymore on VHS, identifying all of the references. I’m guessing this is similar to a lot of people, and Jhené’s use of this film with her and another actor of color replacing the original white actors lifted my spirits. I saw myself reflected, someone I look up to actively playing a widespread role, granting me a feeling similar to my experience watching Dumdfoundead‘s “Safe” for the first time.

Kehlani holds a special place in my heart as well. As a strong independent female of color, she is burning a path for future female artists of color. An inspiration not only because of her strength and reflection of mixed Asian heritage, Kehlani is also from my hometown and an alumni of my high school. She represents Oakland and I’m deeply in love with several of her songs. She sings about empowerment and individuality, specifically touching on values such as, “Can’t nobody love somebody that do not love themselves.” She also proudly sings, “I always said I’d be the one to do it, I changed the way they lookin’ at us women makin’ music.”

The pride she exudes transfers to me and many more who listen to her songs. I’m inspired by her and Jhené’s music because they show me that multiethnic people can be whole. We can find places to excel and thrive, to reach a level where our voices matter. My next move will be to find additional artists like them who fearlessly blaze a trail for all of us, as artists and as whole people.