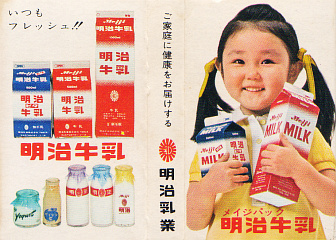 In the text When the Emperor was Divine, I noticed the symbolism between water and milk. Taking a geographic perspective, I like how the symbolism of water for Japan or Japanese could refer to Japan being an island nation-state that is heavily dependent on the ocean. While milk for America, aside from it being white, could refer to America’s dependency on large areas of land, ranches and cows, which produce milk. Also the general cowboy/Wild West culture and milk is largely absent from traditional Japanese cuisine and is heavily seafood based and American cuisine is heavily dependent on it.

Note: Refers to salt water specifically while going through Utah and past the various salt lakes.

Though overall I preferred reading and annotating this book as opposed to the last, mostly because it wasn’t as information dense and I was able to, well just read the book without stopping every couple sentences to write down a note, reaction, thought, look something up etc. I was able to enjoy what the author had written.

I’ve never been a passive reader and my mind is already very easily engaged with a wide variety of topics, part of why I was studying journalism/documentary work previously, I wanted to go into a field where I wouldn’t have to chose one subject to study.

Though this book was more emotional for myself and I honestly didn’t feel comfortable that my feelings so strongly mirrored the boy’s when he had to say he was Chinese and how angry he was about it that he needed yell out he was Japanese, how easily I understood what isolation does to the mind, that their hyper vigilance after they got back was fully justified and that childhood innocence you’re never going to get back.

What they went through and all the Japanese Americans they represent was far, far worse than anything I have had to contend with, which is in part why I feel uncomfortable that I can relate with those feelings. From that alone I feel like, all of those people went through so much worse than I have and I should be ashamed, mortified that I could even for a moment believe that I could understand that kind of pain and suffering.

But I still do and that’s where I wrestle with this book.

I’m part Cherokee, Sami and European. I say European, not white, since I don’t know what that kind of privilege feels like. Normally what I get from “white” people is them questioning where I’m from like it’s some sort of fun game (it’s not, it’s rude and I’m tired of it). And I don’t feel comfortable saying I’m a person of color because that community has not accepted me either and I was even told I looked like a foreigner by a Native man as he tried to tell me where I could take the best photos in the town I had been born and raised in for twenty six years. Instead I ended up telling him of places he didn’t even know of within a mile of where we were standing.

And then, to have my mom say I am “white” and “white enough”, but in the same sentence tell me to always carry my ID, my passport more so because they’re harder to get, with me just in case I have to prove I’m a US citizen and to say I’m Italian. I’m sorry but WTF? Clearly that’s not true if she’s worried authorities will use all their “training” and question whether or not I’m US born. And it hurts. And this book was the first thing I’ve read that had my feelings written out.

That someone out there understood what it felt like to belong nowhere and have your heritage denied, despite the drastically, drastically different circumstances.

That and growing up with the thought that some boarder patrol agent or police officer could come up to me and insist I wasn’t a citizen and I’d have to have documentation on me to prove them wrong (because racial profiling is so effective…). First because of 9/11 throughout middle school and most of high school and then because of all the immigration idiocy that’s led to the boarder wall (and with of all the things wrong with that alone…) and then back to the complete ignorance over Islam and Islamic culture again.

And it hurts. It really, really hurts. And it’s scary. It means I don’t look like I belong here at all. It means I don’t look enough like any part of my heritage. That none of these groups would accept me. Not light enough, dark enough, nothing to physically distinguish what racial history and culture I get to partake in. Worse, because people can’t place my racial ethnicity at a glance and with the ignorance and paranoia made worse by the media, they far too easily jump to conclusions and they’re conclusions that are both wrong and dangerous to come to about anyone.

And all I have is some photos of one book that didn’t get thrown away when my great-grandmother died (she was a victim of elder abuse and her second/ex-husband’s daughter came in like a snake when she found out my great-grandmother had dementia, took everything she had and threw away the rest).

The person it belonged to was a relative of my great-grandfather and a member of the Cherokee National Historical Society back in 1983. But outside of my great, great “Uncle Shorty”, and the stories my grandma told me about him, he always told her while she didn’t look Cherokee on the outside, she was definitely Cherokee on the inside. Hearing that he would say that to her really makes me wish he hadn’t passed away before I was born, only by a year. Otherwise I don’t have much else outside of a handful of names.

I guess I can say that this book makes me want to try and reach out to that part of me, the Cherokee, that’s been denied and wanted to run around the corner and scream “I’m Cherokee!” every time I had to listen to my family rant on about how we, Native Americans, should just assimilate, stop whining and complaining cause they (white people) “won” and the constant complaining about Native culture being shoved down their, very hateful, very ignorant, very racist white throats (so, yeah, pretty blatant, hateful hypocrisy for twenty six years takes its toll).

I just hope the Cherokee side of me is accepted, I don’t want to be “not enough”.