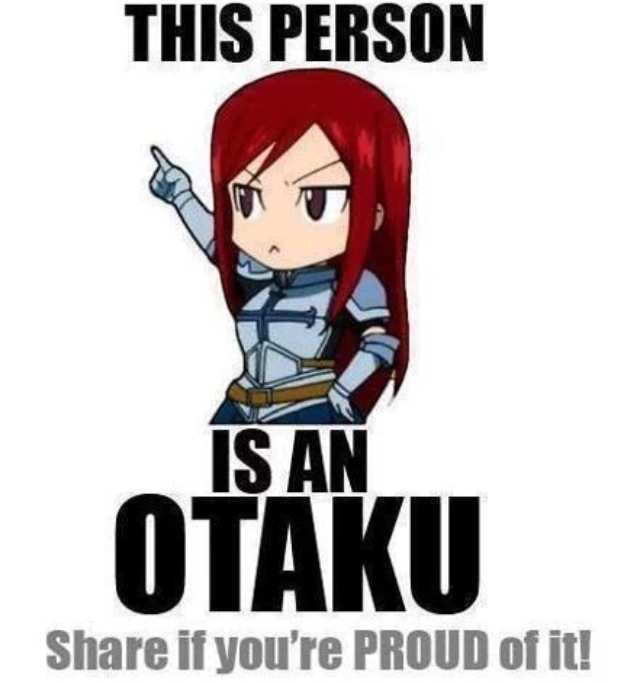 Looking into the sources and solutions into otaku stigma alone has been multiple rabbits holes, but one thing I’ve noticed there is the ongoing reclamation of the word otaku stateside. An example of this that also ties into one of the topics covered in class is the, I think incongruity humor, that is a central part of otaku culture as it starts to take pride in the word, rather than shy away from it. 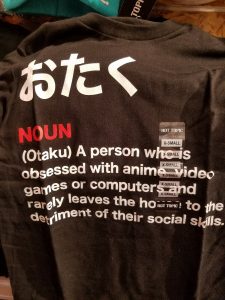 Shirt from the store Hot Topic with the definition of otaku on it.

Covering the different types of humor in class this week, which helped cement my project focus and “home”, which had gotten lost in an increasingly interconnected web of cross cultural currents within just the stateside otaku subculture.

It was interesting to compare the loanword otaku subculture’s group humor, that has no one specific racial group connected, to it to other racially based group humor, such as we read about in “Black Humor: Reflections on an American Tradition”.

Important: I am referring to the loanword otaku subculture outside of Japan in this context.

To be extra clear, Japanese otaku culture is similar but has a much boarder definition, connections and function specific to Japanese society and in its history. For example there are 12 identified main groups of otaku interest in Japan that includes subjects normally not thought to be “geeky” or “nerdy” elsewhere, such as car/automobile culture as one of the 12 main otaku interests areas in Japan.

Though otaku humor is much, much younger and heavily influenced by the internet and technology in its growth and use, there are some general comparisons that can be made. For example, the stereotypical reaction that non-otaku have to seeing anime and manga for the first time, often displayed in the form of a meme: 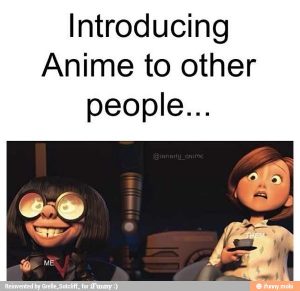 Common screenshot from “The Incredibles” used in various fandom reaction memes. This one is used to describe an anime fan introducing a non-anime fan to anime and their reaction. This one is often used to reference the anime “Attack on Titan” reactions.

Memes are often used often by otaku and other “fandoms”. Fandom being the general internet term to describe a population that shares a strong common interest with an entertainment related piece of media. The more well-known fandoms outside of the anime and manga based ones include “Sherlock”, “Supernatural” and “Doctor Who”, and the subgroups of these fandoms, such as “WhoLock” (Doctor Who and Sherlock) and the notorious “SuperWhoLock”. 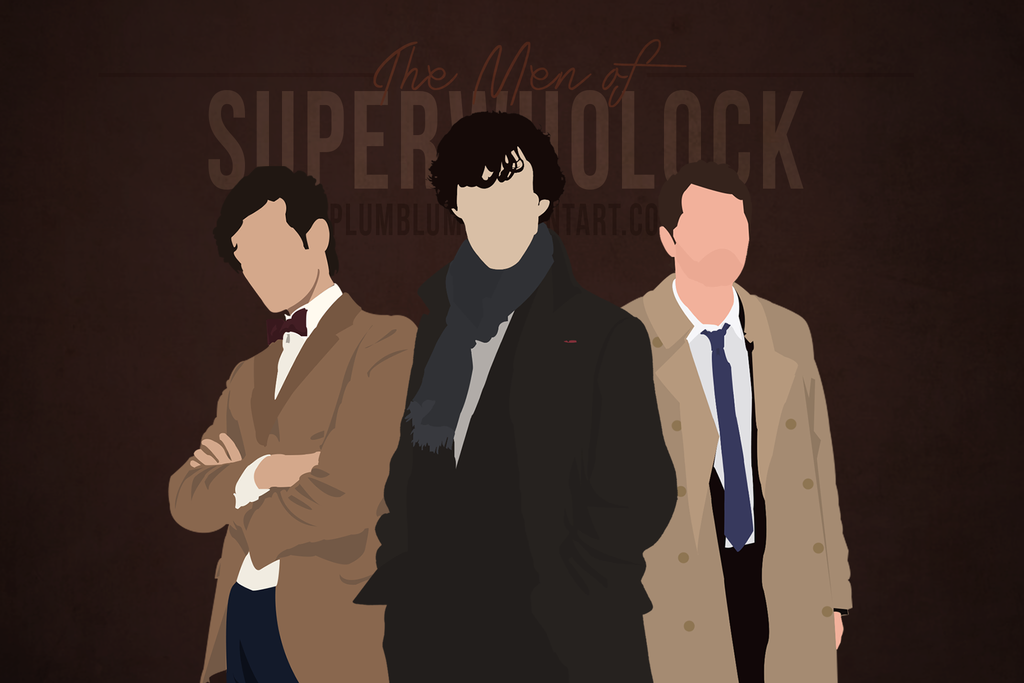 Art of the SuperWhoLock fandom featuring one main leading role of each show titled “The Men of SuperWhoLock” made by “Plumblum”.

The reason I bring specifically SuperWhoLock into the group humor topic is because this group, while more accepted by western society and younger than the otaku fandom, also uses similar forms and delivery of humor as the otaku culture in regards to the less favorable stereotypes made about the group. 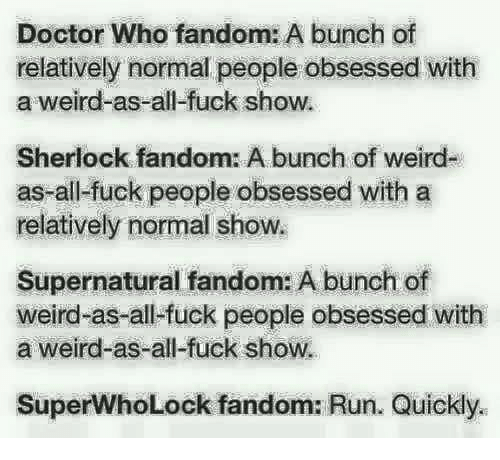 A meme of the short stereotyped explanation of each group of people in the different parts of the SuperWhoLock fandom. 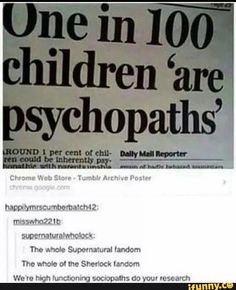 A Tumblr post featuring a news article about psychopaths with comments featuring in group humor, specific to the Sherlock part of the fandom.

I could keep going on fandoms, where they intersect, debate, crossover and heavily crossover, their general lack of acceptance, stereotypes and to what degree each type is accepted in American society, international society, meme humor and culture (including databases for memes like KnowYourMeme.com), the three main theories of humor, plus other theories, shown in memes and the how they all start to mash together with those with “multiple fandom syndrome” – not an official medical term, once again group humor – but I don’t have that much time.

So back to the otaku humor, there are many in-group jokes directly related to the use of the word and the stereotypes which I will use memes to demonstrate and explain (in part to “show not tell”, aside from a explanation/commentary for clarity, but mostly because I have headache at the moment and need a break, but I also need to finish this).

Also, like with group humor, I am not comfortable with all the humor made as some I think only reinforce the negetive stereotypes, while others I identify with. 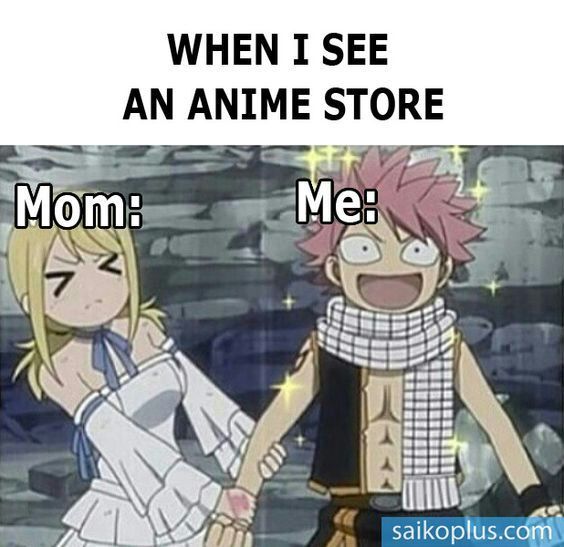 This is a struggle that does not end after you leave home when anime merchandise is there. The “mom” in this can also be friends, a significant other or your wallet. 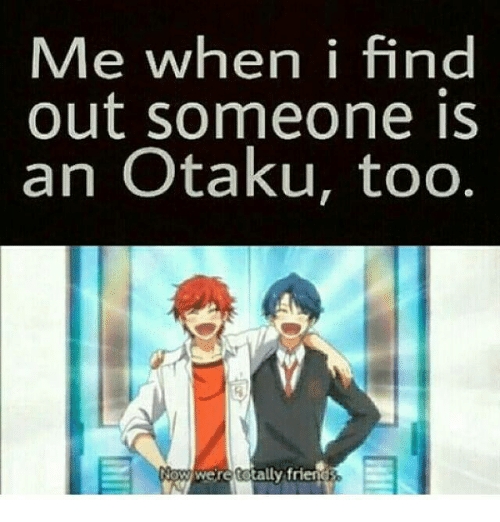 It is fairly hard to find other people who identify as otaku and not just a causal fan (and also not likely understand the group humor). It is not uncommon to find out a friend or family member is an otaku too and have this reaction. 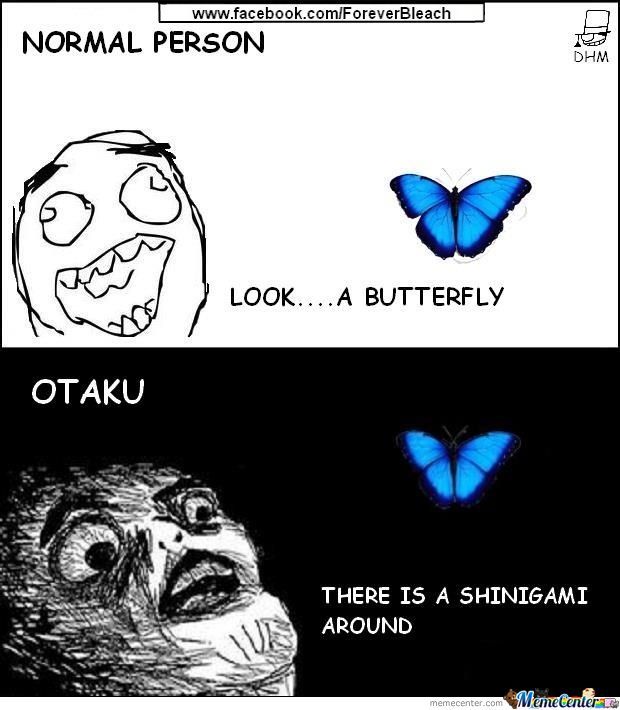 Butterflies are often symbolic in anime. In this meme it refers to the anime “Bleach” and the use of the butterfly to symbolize the shinigami, 死神, “god of death” or “death spirit” in Buddhism and Shinto in Japan. Also butterflies are associated with the soul in Greek and Roman mythology.

In general if there are butterflies in an anime it is foreshadowing something coming, normally supernatural. 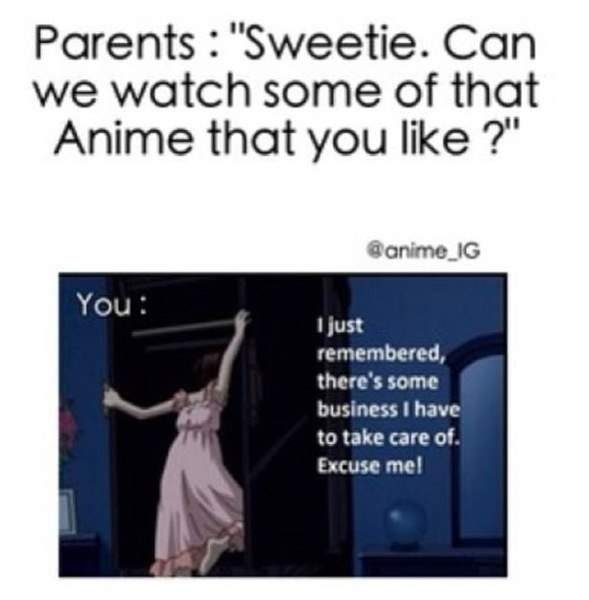 A normal reaction to finally being able to share your otaku interests with your family, friends etc. and realizing that it might not be such a good idea.

In this meme’s case it is reflective of the same emotions, not the same struggle, that “coming out of the closet” has. Some in the LGBTQIA+ community may find this relation/comparison belittling or offensive, but as someone who is trans and an anime fan, the feelings are very similar, even if the identity struggle is nothing near it. To me, it is comforting that there are two groups of people who can empathize with what I feel.

I should also note that being trans, for myself at least, in the otaku subculture is easier (not necessarily easy) than other parts of geek and nerd culture, particularly in comparison to American graphic novels, comics, movies and gaming culture. Either way I think it acknowledges that the things we like, our interests whether it is anime, sports, cars, movies etc. are a part of our identity, who we are and to have part of our identity possibly exposed to misunderstanding, hate and/or rejection, is scary and it overall feels safer to keep it hidden. 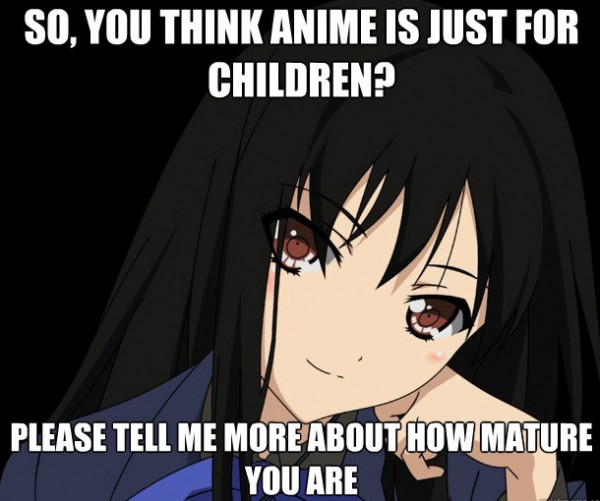 Normally animation is associated with children’s cartoons, so often anime is as well, which is a very ill informed assumption. In this case it does not have to do with “R” rated material (violence, gore, language and sex) or fan service, but rather anime with complex plots and themes like “Akira”, “Ghost in the Shell”, “Cowboy Bebop”, “Full Metal Alchemist”, “Blast of Tempest”, “Rurouni Kenshin” and “Erased”. Anime also has its own set of high brow “Oscar” type shows and movies along with the same issues when dealing with elitist types. 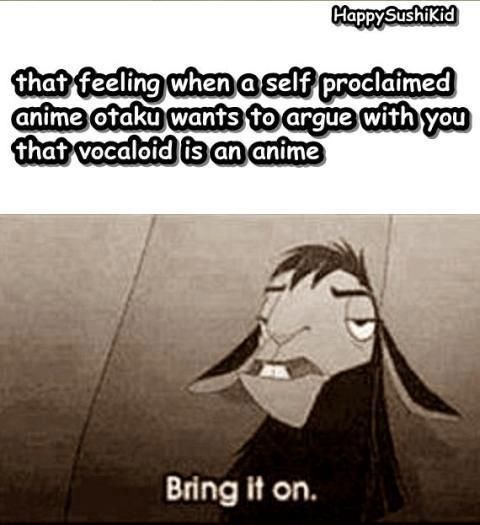 For myself I am not an argumentative type, but as with all groups there are those who mouth off with sheer ignorance. In this case it is the common assumption that Vocaloids, since they are drawn in the anime cell-shade style, are an anime simply because of that. In short, this would be a painful lesson for the one mouthing off who decided to get into a debate with someone who actually knew what vocaloids were (they’re a music generation program created by Yamaha in 2004 – Previous Blog Post). 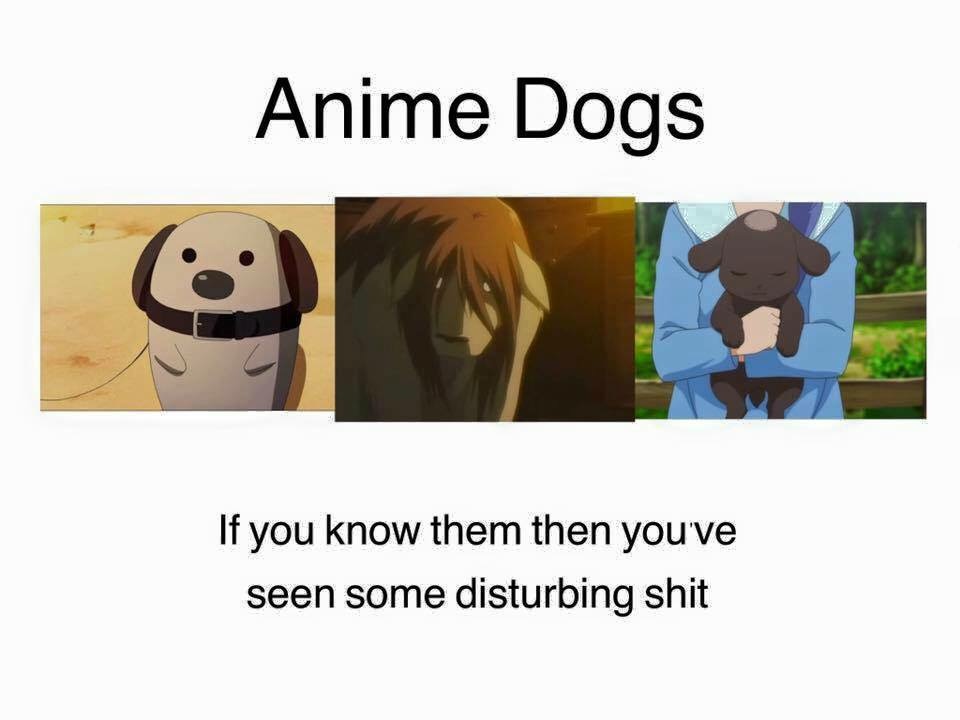 While cats are well-known and common in anime, dogs aren’t as much, and oddly they seem to appear more often in, let’s say very serious, gut wrenching scenes. There are dogs outside of those types of scenes of course, but overall they are less common. 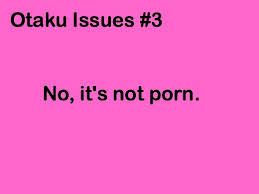 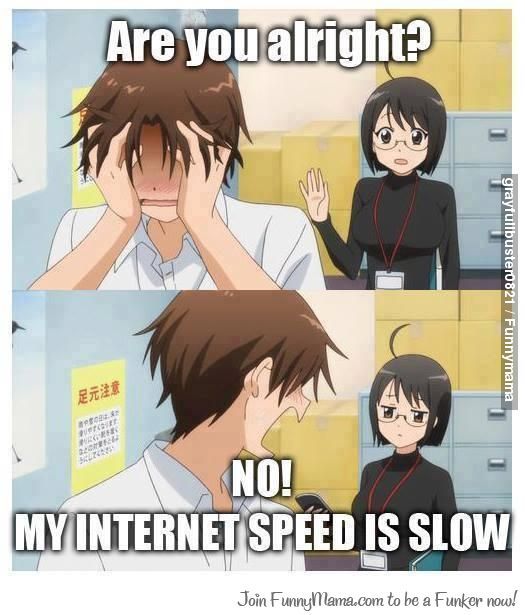 This meme I believe is something that everyone who has had to deal with slow internet speeds can relate to.

As for otaku the humor comes from accessing anime prior to anime streaming services such as CrunchyRoll and VRV, and regular streaming services such as Netflix and Hulu, and during/after the cable channels Cartoon Network and SyFy (formerly SciFi) dropped anime from their lineup and if you did not have access to the anime (as with all of the Macross series produced since 1999 due to a still unresolved copyright dispute), you normally streamed a fan sub, which anyone who has had a show have to stop and buffer repeatedly, is aggravating.

Also it is normally, and still normally, fan subs that are streamed. A fan sub is an anime with the original Japanese audio track but since the show still lacks subtitles (not just English) fans who speak Japanese add a subtitle track in the language they are subbing for other anime fans. This is a controversial practice, more so today than before when access to anime was limited, since many anime are released with dubbed audio track and/or subtitles at the same time they air in Japan. But it could be argued that the earlier days of fan subbing are what paved the way to these developments so anime fans don’t have to rely on fan subs.

So, there is a lot of sub-context that isn’t as easily accessible to those outside the group that I’ve included in my comments, as well as the parts that are, such as slow internet speeds.

However, what I’ve noticed about memes as opposed to other forms of delivering humor, even these memes, is that one or two words can be swapped out and it fits another group with another set of less than accessible content other than for those outside that group. Such as with the meme that features the llama version of Emperor Kuzco from the Disney animated film “The Emperor’s New Groove”. Change the “anime otaku” and argument about vocaloids with another common argument made by presumptuous members of a group and it will still work as group humor for that group, even though the delivery, the rest of the text and image are exactly the same.

Which is why there are and can be many versions of what is technically the same meme, they are just aimed at another group in terms of content and context.

In a way, I can see memes as a way to help understand and translate parts of one group’s humor to members of other groups thanks not only to the visual format and minimalist nature of memes, but also because they rely more heavily on shared universal human traits, reactions and emotions, rather than events and experiences specific to the group.

In short, memes show that identifying as an otaku or as an anime fan is not dissimilar to identifying as a sports fan, gaming fan, Marvel fan, dinosaur fan, culinary fan etc.

The subject and/or interests may be different, but the same emotions and reasons for liking what you like and choosing to identify with it enough that it becomes part of your personal identity and shapes how you present yourself, what you do, where you go and who you hangout with, those basic human factors are the same. What makes them all different, is where we all share and, hopefully, learn about and from each other, and accept those differences as also something that makes us all human.

So in conclusion, another definition of otaku: 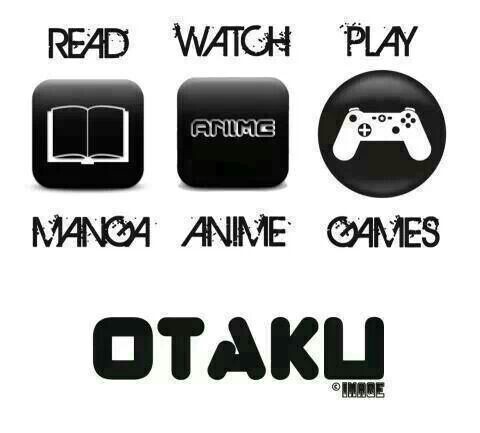