HANNELINE’S TALK IS CANCELED DUE TO HURRICANE SANDY. IN HER STEAD WE HAVE NICHOLAS NYLAND!

ARTIST STATEMENT
When asked to describe my work, I usually answer, “Abstract.” Unfortunately, I’ve found that answer is a great way to stop a conversation dead in its tracks. Something about abstraction seems to shut people down on a verbal level, which also explains why it is so hard to pin it down in writing (this statement not excepted).
Abstraction’s “dumbness” is probably why I’m drawn to pursue it; it is generous and capacious, able to absorb and then release a multitude of references. In my case, references as disparate as Chinese scholar’s stones, Japanese gardens, early American decorative traditions, or seventies design.
I intend to conjure a world or a space for imagination and reverie in my work that may manifest itself in miniature form or room sized wall drawing/painting installations. My work is driven by a fascination with the life of form, the nature of creation and the will to decorate. I feel reassured to borrow freely from our gloriously diverse visual culture because, as George Steiner reminds us, “there are no more beginnings”; we are playing with all the cards. The true creation, the art, lies in the transcendence of those parts into an animate whole.
-Nicholas Nyland

Hanneline Rogeberg is a painter who works with the paradoxes of representation and language.

I have never been interested in works of visual art that I fully understand. Total comprehension means I stop looking. It is the mysterious quality of Hanneline 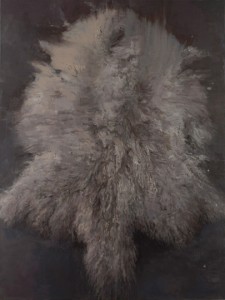 Røgeberg’s work that attracts me, and where there is mystery, there is the possibility of genuine dialogue. Words cannot contain visual experience, but the back and forth of conversation can sometimes allow us to see more or to see again. Looking at any work of art establishes a relation between the spectator and the thing seen. In Hanneline’s painting, I recognise a quality that I myself am obsessed with — a sometimes agonising drive to break down conventional perceptual boundaries, to resist the categories we find ourselves inside. And because we share this desire, the two of us are, at the very least, artistic cousins, two people immersed in the pleasures and pains of continual ambiguity. – SIRI HUSTVEDT

She has shown in solo shows at the Contemporary Art Center in Cincinnati, the Vancouver Art Gallery, the Henie-Onstad Kunst Center and most recently at Dortmund Bodega, Oslo, Norway this March, 2011, and in groups shows such as the MIT List Center, the Whitney Museum of American Art, the Aldrich Museum of Contemporary Art, the American Academy of Arts and Letters and a four person show the Richmond Museum, VA, in 2009. She has received an NEA grant in 1996, a Guggenheim fellowship in 1999, an Anonymous Was A Woman grant in 2003, and an OCA grant for a catalog publication in 2009. She is an associate professor of art at Rutgers University and has previously taught at University of Washington, Cooper Union, and Yale University. She was a visiting artist at Skowhegan in 2009.

This entry was posted in 2012-13. Bookmark the permalink.