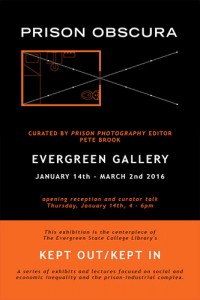 Keeping the Faith/The Prison Project is one of the longest-running prison arts programs in the US.

Ms. Graney’s latest work, a peformance/installation project called girl gods, will premiere at On the Boards in Seattle in 2015. With National Dance Project Production and Touring support, the work will tour nationally and internationally through 2016.

Laura Sherbo received her MLS from Western Michigan University in 1978 and has dedicated her career to providing library services to the incarcerated by working with inmates and prison administrators to uphold the Library Bill of Rights.  She is currently the Branch Library Services Manager for the Washington State Library, overseeing nine (minimum and maximum security) prison library branches and two mental state hospital branches throughout the state.  Laura headed the McNeil Island Corrections Center library for 20 years, 13 of which she spent living on the island.  In 2012, she was awarded the Association of Specialized and Cooperative Library Agencies (ASCLA) Leadership and Professional Achievement Award from the American Library Association.

Neal Vandervoorn taught high school for twelve years before he switched course to pursue librarianship.  He received an MLS from Emporia State University in Kansas and was employed with the Washington State Library as Branch Manager/Senior Librarian at Eastern State Hospital, Lakeland Village in Medical Lake and Western State Hospital for a combined twenty-two years. He provided library services to the mentally ill, the developmentally delayed, hospital staff and extensive outreach services to locked wards at Western State Hospital.  He retired as a medical librarian from MultiCare Health System in Tacoma in 2009.