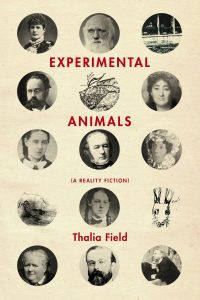 RESCHEDULED for fall 2017
Thalia Field‘s work lives at the crossroads of prose, essay, poetry, even theater. Her collections include Point and Line; Bird Lovers, Backyard; A Prank of Georges; Ululu (Clown Schrapnel); and Incarnate: Story Material.

Thalia Field is 3rd generation from the Hyde Park neighborhood of Chicago. She worked in theater as a writer, director, and producer before beginning to write books. Thalia has lived and worked in Paris, Berlin, and New York, as well as spending many summers in Juneau, Alaska where she helped to start a summer writing project. Thalia has been teaching fiction and multimedia and interdisciplinary creative/critical practice in the Literary Arts department at Brown University since 2000.