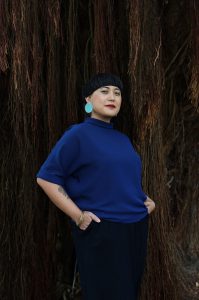 Thea Quiray Tagle, is a curator, writer, and an assistant professor of ethnic studies and gender & sexuality studies at the University of Massachusetts, Boston. Throughout her various research and creative projects, Thea remains interested in the following questions: how can socially engaged art and performance move us, collectively and individually, to inhabit the world and relate to each other in ways that are non-extractive, anti-capitalist, and queer? Her exhibition AFTER LIFE (we survive) at San Francisco’s Yerba Buena Center for the Arts, which Dr. Quiray Tagle will be discussing for the Evergreen lecture, is the second of a series of research-based curatorial projects about creative modes of surviving climate collapse and political violence practiced by LGBTQ and BIPOC peoples; the first, AFTER LIFE (what remains), ran from June-July 2018 at The Alice, an independent gallery in Seattle run by a collective of femme and queer artists that Thea was proud to be a member of from 2018 through its closure in 2019. Thea’s writing on Filipinx American contemporary art, visual cultures of violence, urban redevelopment in the Bay Area, and grassroots activism and speculative futures in the expanded Pacific Rim can be found in scholarly and popular venues including ASAP/J, American Quarterly, and Hyperallergic. During the COVID-19 crisis, Thea is a visitor on occupied Ohlone territory. For more about her writing, teaching, and curatorial projects, visit her website: www.theaquiraytagle.com

This entry was posted in 20-21. Bookmark the permalink.