LA GRANDE, Ore. – After helping lead the Geoducks to a pair of shutout victories at home against Warner Pacific and on the road at Oregon Tech, senior midfielder George Bundy (Enumclaw, Wash./Enumclaw HS) has been named Red Lion Cascade Conference Defensive Player of the Week. 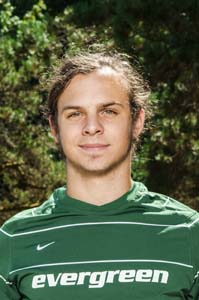 Bundy, a staple for the Geoducks this season, played 175 of 180 minutes for the green and white.  In addition to playing stopper in the middle third, he also had an assist in the first goal of a 2-0 win over Warner Pacific last Wednesday.

The Geoducks, who have already secured second place in the conference standings, wrap up the regular season on Saturday afternoon against Northwest, beginning at 1 p.m.  Evergreen then opens up the postseason on Nov. 6 with a home game against the third-seed, also at 1 p.m. on Evergreen Pitch in Olympia, Wash.

PORTLAND, Ore. – After  Evergreen upset Concordia last season, the third-ranked Cavaliers made sure that history wouldn’t repeat itself, blasting the Geoducks, 8-0, in a Cascade Conference women’s soccer match on Sunday afternoon in Portland, Ore.

The Cavs first got on the board in the 16th minute as Alicia Alarcon-Evans took opportunity of a one-on-one with Evergreen keeper Kaitlin MacKenzie (Lake Stevens, Wash./Shoreline CC) and scored from 15 yards out.  Concordia added two more goals before halftime as the Cavs took the 3-0 lead into the break.

In the second half, Concordia didn’t let off the gas as the Cavs would add five more scores to the board in the final 45 minutes of play.  The Cavaliers outshot the Geoducks, 35-6, on the afternoon and held a 9-0 advantage on corner kicks.

The Geoducks conclude the 2012 campaign with a record of 2-11-1 overall and 2-7-0 in Cascade Conference play, good enough for eighth place in the conference standings.

KLAMATH FALLS, Ore. – After a competitive opening set, the Evergreen Geoducks couldn’t get over the hump, falling to the Oregon Tech Owls in straight sets, 25-21, 25-12, 25-17, in a Cascade Conference volleyball match on Saturday evening at Danny Miles Court in Klamath Falls, Ore.

In a set that featured six ties and four lead changes, the Geoducks battled with the Owls in the first set as neither team could build much of a team.  After leading by just two at 22-20, OIT managed a 3-1 run to win the first set, 25-21.

The Owls continued the run in the second set, opening up the frame with a 7-1 run and Evergreen couldn’t catch up. A 6-0 run put the set out of reach and a Kristen Walters kill gave Oregon Tech the 25-12 win to take the two-set lead.

The third set featured a number of mini-runs that slowly built a double-digit lead for the Owls.  Evergreen eventually settled down but the differential was too much to overcome as OIT collected the 25-17 win to clinch the match in straight sets.

Oregon Tech was led by Walters, who finished with 11 kills and five errors on 28 totall attacks.  Kayleigh Whelchel had 18 assists for OIT and Megan Holland collected 12 digs in the win.

The Geoducks return to Olympia on Friday night when they play host to Corban, beginning at 7 p.m. at CRC Gymnasium.  Evergreen will then wrap up the 2012 season on Saturday night with a match against Northwest Christian.

KLAMATH FALLS, Ore. – Ethan Sumlin (Centennial, Colo./Littleton HS)  scored in the first minute of the second half and Willie Spurr (Seattle, Wash./Roosevelt HS) put one in in the final minute of the match as the Evergreen Geoducks earned a 2-0 win over the Oregon Tech Owls in a Cascade Conference men’s soccer match on Saturday afternoon at Trevor Derrah Field in Klamath Falls, Ore.

After a scoreless first half, it was Sumlin who opened up the scoring after picking up a rebound and firing it into the center of the net from about 15 yards out.  The Geoducks continued to put pressure on the Owls defense but it wasn’t until the final minute that Evergreen would score again.

After OIT brought the keeper up to the offensive half of the field, Spurr put in a shot with just one second left on the clock for his eighth goal of the year and a 2-0 win for the green and white.

Keepers Collin Harlow (Kirkland, Wash./Shoreline CC) and Mitch Treend (Vancouver, Wash./Prairie HS) split time in net, combining for four saves and the shutout.  Loren Jessen played nearly all 90 minutes for the Owls, making nine saves but allowing the two goals, after coming in six seconds in for senior Tanner Lee, who earned the start in his final home appearance.

The Geoducks return home next Saturday for their regular season finale when they play host to in-state rival Northwest, beginning at 1 p.m. at Evergreen Pitch in Olympia, Wash.

ASHLAND, Ore. – Battling for one of the top seeds in the Cascade Conference, the Southern Oregon Raiders swept past the Evergreen Geoducks, 25-12, 25-16, 25-16, in a Cascade Conference volleyball match on Friday evening in Ashland, Ore.

In the first set, the Geoducks get it competitive early, pulling within three points at 15-12 but the Raiders flexed their muscles, using a ten-point run to take the first set, 25-12.  Evergreen managed just four kills in the first frame, compared with 12 for SOU.

The second set had a similar field as Evergreen kept it close early but the Raiders used short runs to pull ahead as Southern Oregon earned the 25-16 win. Evergreen hit a little better in the second frame, putting down eight kills but they also had eight attack errors to hit an even .000 for the set.

Evergreen hit well in the third set, putting down 11 kills with just five errors, but the Raiders were just that much better, collecting 16 kills with just one error as they earned the 25-16 set three win to sweep the match.

Southern Oregon was led by 11 kills from Haley Keller.  Caryn Westrick put up 21 assists while Renee Yomtob led all players with 20 digs on the night.

The Geoducks play their final road match of the season on Saturday night when they take on Oregon Tech, beginning at 7 p.m. on Danny Miles Court in Klamath Falls, Ore.