The Geoduck women, who finished tied for seventh last season while earning a spot in the 2012 Cascade Conference tournament, earned 23 points to take ninth in the preseason poll, despite returning four of five starters in 2012-13.  Evergreen will be led by All-CCC forward Danielle Swain (Rainier, Wash./Black Hills HS), who was second in the conference in scoring (15.0 ppg) and third in rebounding (9.6 rpg).

On the men’s side, Evergreen has nowhere to go but up as the Geoducks were picked 10th in the preseason poll after going winless in conference play last season.  Evergreen returns forwards Elzie Dickens III (Seattle, Wash./Highline CC) and Travis Wagner (Federal Way, Wash./Green River CC) from a year ago but the rest of the roster will look brand new as the green and white look to surprise some teams on their way up the conference standings.

The Geoduck men will open up the 2012-13 season on November 1 with an exhibition contest at home against the Seattle Mountaineers.  Their first counting game comes a few days later when they travel up to Kirkland for a non-conference tilt with conference-foe Northwest.   The Evergreen women will open up the season at home on Nov. 13 with an exhibition against crosstown foe Saint Martin’s before opening up the season in earnest on Nov. 17 at Puget Sound.

LA GRANDE, Ore. – As the 2012-13 season begins to ramp up, the Cascade Conference has released their preseason polls, as selected by the coaches.  Evergreen men’s soccer had the highest ranking, predicted to finish fifth in the upcoming season.  Women’s soccer was selected eighth while volleyball was prognosticated to finish 10th in the final conference standings.

The Geoduck men’s soccer program picked up 32 points in the preseason poll to finish three points back of Warner Pacific in fourth place and two points ahead of College of Idaho in sixth position.  Concordia earned all eight first place votes to earn selection as the favorite to win a third straight conference crown.

Evergreen’s women’s soccer team earned the eighth spot in the preseason rankings with 31 points, just one point back of seventh-place Oregon Tech and one point ahead of Eastern Oregon in ninth.  The Concordia women also were unanimous selections to win the conference title, which would be their 15th in 16 seasons.

After struggling in 2011, the Geoduck volleyball program has reloaded and is looking to surprise some teams in 2012.  They will have plenty of opportunity to move up in the standings after being selected 10th by the coaches in the preseason poll.  College of Idaho was the unanimous choice to repeat as Cascade Conference champions.

The athletic year kicks off on Aug. 17 when the men’s soccer team plays host to Trinity Lutheran in a non-conference match.  Volleyball will open up their season on Aug. 23 in Spokane against Carroll College while women’s soccer has their first official kick on Sep. 1 at home against Menlo.

OLYMPIA, Wash. – After months of hard work from The Outdoor Program staff, Evergreen is excited to announce the opening of the new and revamped challenge course on the campus of The Evergreen State College. 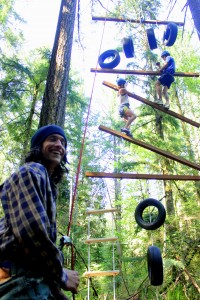 The course, which includes over 12 low-element team challenges as well as four high elements, is designed for groups that are looking to build teamwork, communication and problem solving while having fun at the same time.  Take a “leap of faith” 40 feet off the ground and swing on a trapeze, speed down the 500 foot double zip line, play around on the vertical playpen, and use teamwork to defeat the giant’s ladder in an action-packed day of excitement!

“The TOP program, led by student coordinator Rob Healy and his throng of staff and SOS students Dave Robb and Conner Abdelnoor were the driving factors in the establishment and rebuilding of the course,” said recreation coordinator Chris Ertman. “Interns and SOS students spent hours upon hours in the rain, snow, sleet, and hail every day clearing trails, building challenges, removing homeless encampments and excess trash until the project was complete.”

The course is ACCT (Association of Challenge Course Technology) certified and many of the elements were built from fallen trees from our very own evergreen forest and most of the materials were recycled from the old course that was closed down in 2005.

Trained facilitators will guide your group in progressive challenges, making sure your group gets the most out of every experience.  If you have an end goal or desire, our facilitators can develop a program specific to meet your group’s needs.

There are a variety of packages available, ranging from three-hour sessions all the way to full day and overnight experiences.  We are now taking reservations and are offering a special June discount for all Academic programs that want to break up the end of the school year slump.

For more information, including to make a reservation, please contact Chris Ertman at ertmanc@evergreen.edu or 360-867-6520.

The inaugural class was chosen specifically to embody the history of recreation and athletics at Evergreen. These four individuals left unique legacies and it is fair to say that the recreational and athletic opportunities at Evergreen would not be the same, or even existent, without their footprints.

From taking on the administrative role of forming a recreational and intercollegiate athletics program at Evergreen to being a member of the founding faculty to providing countless students with a once-in-a-lifetime experience to being the first ever All-American in school history, these four represent what we hope recreation and athletics will be at Evergreen for the foreseeable future.

Sarah Applegate ’92, MiT ’95 – The first All-American in school history, she swam for the Geoducks while earning both her undergraduate and graduate degreees at Evergreen.  Currently the librarian at River Ridge High School in Lacey, she was awarded a Fulbright Distinguished Award in Teaching grant to study school libraries in Finland.

Mike Denoyer ’75 – Among the first graduates in Evergreen history, owns and operates Grand Canyon Expeditions, offering expeditions down the Colorado River for many years.

Willi Unsoeld – Founding faculty member at The Evergreen State College. Part of first American expedition to summit Mount Everest, reaching the peak on May 22, 1963. Died in an avalanche during a winter climb of Mount Rainier in March 1979.

For information regarding the Evergreen Recreation and Athletics Hall of Fame, including how to nominate future honorees, visit http://evergreen.edu/athletics/halloffame/.

OLYMPIA, Wash. – In recognition of National Recreational Sports and Fitness Day, The Evergreen State College Department of Recreation and Athletics is opening the doors to the CRC on Wednesday, Feb. 22.  The department will be offering a special open gym for all hoopsters as well as membership specials for faculty and staff.

The CRC Gymnasium will be open from 11-1pm for all faculty, staff and students who want to work on their jumpers.  In addition, all faculty and staff are offered free admission to the CRC on Wednesday with proper Evergreen photo ID.

In addition, any faculty and staff that sign up on Wednesday for an annual membership with payroll deduction will receive the first month free of charge.

National Recreational Sports and Fitness Day coincides with the formation of the National Intramural-Recreational Sports Associaiton (NIRSA), which met for the first time on Feb. 22, 1950 at Dillard University in New Orleans, La.