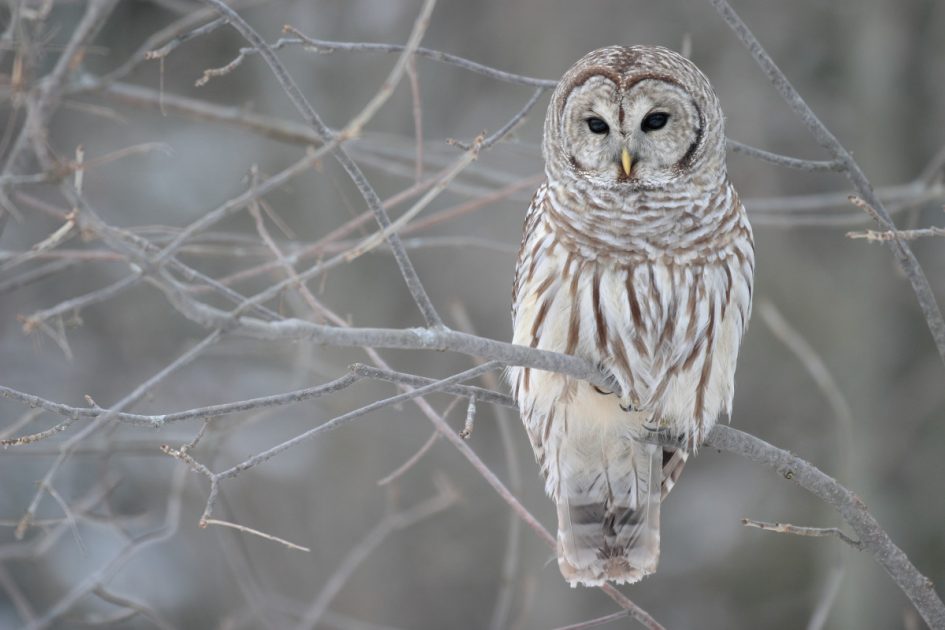 Picture from Wikimedia, by User Mdf. 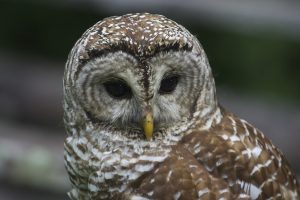 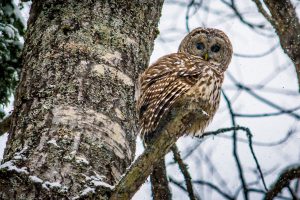 Barred Owl in the Snow. Photo captured by James Mann and shared via Flickr.

Barred Owls are commonly confused with a native owl, the Spotted Owl, because their plumage looks remarkably similar (National Audubon Society, 2016). The most obvious difference between the two species is that, as the name suggests, Spotted Owls are spotted whereas Barred Owls are streaked (James and Mazur, 2000).

Barred Owls were originally discovered in 1873 in Montana. It wasn’t until the 1960’s that they were even found in the pacific northwest and the mid to late 1970’s that Barred Owls had a foothold all the way through the pacific northwest and the west coast. Part of the reason that the Barred Owls had such a hard and long time expanding their distribution was due to lack of forests within the Great Plains. An increase in forests near the Missouri River was a real turning point in their distribution. The added forests caused them to be able to move further east with more foraging and shelter locations (Livezey KB., 2009). 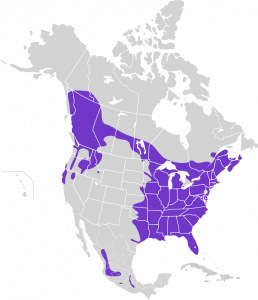 Barred Owls were originally broken into a northern, and an eastern group. Once there was more tree density within the great plains, the groups combined again and kept moving west toward the pacific. It has been thought that the extra forest growth decades ago was due to European settlers suppressing wildfires causing the forest to grow much denser and further than before allowing the Barred Owls ample habitat to keep moving through (Livezey KB., 2009).

Barred Owls survive in mostly wooded locations. They are seen mostly roosting in locations with easy access to water for hunting (All About Birds, 2017). They nest in both coniferous and deciduous/coniferous forests, with Barred Owls also preferring older and matured growth to newer growth (National Audubon Society, 2016. Singleton, 2017).

Commonly, Barred Owls can be found near or within trees with much thicker basal diameters, although this proves to be less important than how good of a roost sight they have actually found within their tree (Irwin et al, 2017. Singleton, 2017). 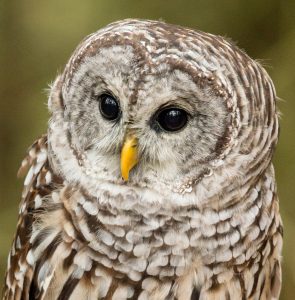 A close up of a Barred Owl. Photo taken by Peter K Burian and shared via Wikimedia.

Barred Owls will nest and stay in locations with gently sloped grounds as well as they seem to prefer 3/4 tree canopy coverage above them (James, 1998). When Barred Owls are preparing to breed, there is an even higher percentage that will nest solely in old growth with most Owls straying away from any form of younger wood (James, 1998. Gaines et al, 2010). Barred Owls will generally stay within the same 400ha (4 km2) for most of their adult lives, spreading up to 600 ha (6 km2) during non-breeding seasons and staying within a 100 ha (1km2) area during the breeding season (James, 1998). Barred Owls are much more likely to stray further from home in the winter months due to food scarcity and needing to search further for food (Forsman et al, 2007).

Barred Owls are birds of prey. They sustain themselves off of other smaller creatures. According to the analysis of Barred Owl pellets, Barred Owls prefer to hunt and catch prey near water sources (Livezey, 2007). Although they are solely meat eaters, they are opportunistic hunters and will eat multiple varieties of animals dependent on what is most available in the area. Their choices of food vary depending on the season they’re hunting in, although the basic types of creatures they eat remain the same(Livezey, 2007).

If they are hunting in colder months, they will tend to catch more mammals as prey and less birds, amphibians, and reptiles. Barred Owls seem to eat 98% mammals such as rats, mice, small rabbits and hares, and squirrels during the winter months. If needed, they will supplement their diets with birds spiders and fish, as they become available (Livezey, 2007).

Whereas in the warmer months their diets grow to include other variants of creatures as they become more readily available. In the summer months they will eat about 62% mammals, 13.5% birds, 10% insects and spiders, 5% amphibians, 5% earthworms, and a small amount of fish, reptiles, snails, and crayfish. In summer especially, they take advantage of the waters nearby to find their prey. Owls as a species hunt and are most active at dawn or dusk rather than during the heat of the day (Livezey, 2007)

Barred Owls who are found to be living in urban environments have a slightly different diet. Their diets consist of  one or two large species of creatures predominantly, such as almost fully rodents and small birds with very little evidence of anything else (Elliott, 2015).

Barred Owls have been known to make many distinctive sounds, the most noticeable being their “Who cooks for you” hoot heard below. A hoot aptly named due to it’s likeness to a person saying that phrase (Mennill and Odom, 2010. Fraser, 1985).

They also are heard with a variety of other hoots such as (Although most people break these hoots into only three groups now instead of all named below (James and Mazur, 2000):

Scream: Usually an alarm call, one or two notes that ascend and end abruptly.

One-Phrased Hoot: Four evenly spaced notes. Often given by females as a call or after an alarm call.

Short Ascending Hoot: Similar to ascending hoot but has only around 5 notes.

None of these noises have names that they are specifically known as, so these names were taken from Mennill and Odoms 2010 article on Barred Owl vocalizations.

Audio of a Barred Owl with a very prominent “Who cooks for you” hoot. By Wikimedia Commons user Fae.

Juvenile begging call (a sound made for some time after leaving the nest, like this bird):

Barred Owls are born with lots of downy feathers on their body to keep them warm, but they rely on their parents to care for them once they hatch. From a very young age, Barred Owls can be very mobile. Although they won’t be able to fly, they will still explore by grasping things with their talons (James and Mazur, 2000). 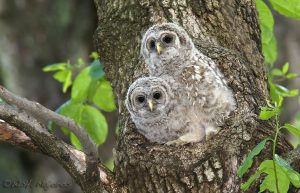 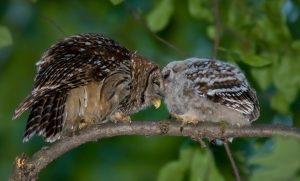 Barred Owls tend to not sleep for very long during each rest with the average being about 28% of every hour spent sleeping. They will roost high in trees, sometimes younger owls will nestle within grass below, especially if it’s hot (All About Birds, 2017).

With an increasing amount of urbanization in the Pacific, it’s no wonder that birds, especially owls, are having to breed and spend more of their time within neighborhoods and cities. Even still, there is a remarkable small number of owl-vehicle impacts with Barred owls having no recorded impacts. This is though to be due to the fact that Barred Owls are mostly active during dawn and dusk, as well as them tending to soar/float wherever they are going, most likely high enough to avoid cars (Bates et al, 2015).

Although Barred Owls are most active at dawn and dusk, they are still one of the most active owl species during the day with many reports of spotting them as well as hearing their distinctive calls when walking through parks and forests (All About Birds, 2017. Fraser and McGarigal, 1985).

Although there is little information recorded, Barred Owls are thought to be monogamous with pairs breeding for life, although there are a few instances of single non-breeding owls staying in one area their whole life (James and Mazur, 2017).

All About Birds. (2017). Barred Owl Identification, All About Birds, Cornell Lab of Ornithology. Retrieved March 3, 2019, from https://www.allaboutbirds.org/guide/Barred_Owl/id

Because Barred Owls are playing a role in the decline of Spotted Owl populations, many people think that they should be culled and their numbers decreased just because they according to them they are not a native North American species, even though they are a native species, just not seen as far west as they have now become (Bodine and Capaldi).

Barred Owls are seen as a “Least Concern” animal on their conservation status and their numbers compared to the Spotted Owl are growing at a very rapid pace (Weekes and Wiens, 2016).

Rhian Greaves is a Biological Science student at the Evergreen State College. She wrote this blog entry in Winter 2019 as part of the Birds Inside and Out class.