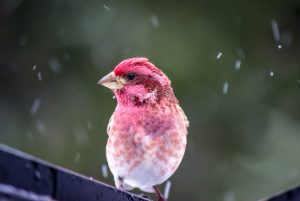 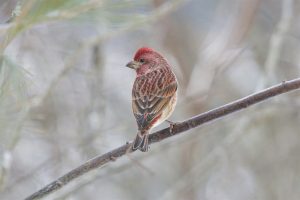 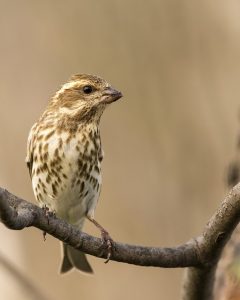 The Purple Finch is about 5-6 inches long and show sexual dimorphism. The males are cranberry red while the females are varying shades of brown and beige. They are often confused with the House Finch, whose populations share similar characteristics. The main way to tell them apart is that the male Purple Finch is much more colorful, with purple extending down the breast, belly, back, and wings. The female House Finch is a bit darker brown than the Purple Finch. Both sexes can be distinguished from the other species by their beaks as well, Purple Finches have bigger, thicker beaks than the House Finch (Wootton, 1987).

Purple Finches were introduced to the United States in the late 19th century (Smith, 2013) and have slowly spread across the continent over the decades. Today, there is a genetic distinction between the Western and Eastern Purple Finch. The two groups often look and sounds slightly different from one another (Zuccon, 2011). 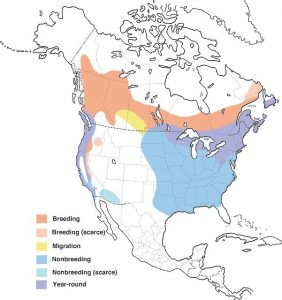 We are very lucky in the Pacific Northwest, as Purple Finches are year-long residents. They are wide spread throughout most of the United States and Canada. Purple Finches are likely to be spotted in many habitats, including forests, wetlands, grooves, and suburbs (Audubon). The most reliable place to spot a Purple Finch is at a bird feeder. On Evergreen campus, they frequent the bird feeders and seem to visit near the Longhouse quite often.

Purple Finches may migrate depending on environmental cues. If conditions are well, they may choose to stay farther north. If there are not enough resources or the environment is not suitable in some way, they will being migration across the United States (Kennard, 1977).

Purple Finches mainly prefer temperate coniferous forests (Smith, 2013).  They tend to primarily enjoy moist, cool, evergreens forests, and do not adapt well to urban environments. This species can also be found in various ecosystems such as wetlands, mixed forests, and even backyards (Audubon).

Generally, Purple Finches can be found up in trees or on open ground searching for nuts and seeds (Audubon). Trees such as Evergreens, maples, and elms provide much of their diet. They have a very adaptable palate, eating berries as well as soft flower buds, dandelions, and insects. Because of their love for coniferous seeds, they tend to migrate along with the trees to always have the best cone seeds (Cole).

Both males and females sing, which usually have a warble-y quality about it, similar to a finch.

Here are recordings of their songs:

From Jeff Dyck from xeno-canto.

From Taylor Brooks on xeno-canto.

Purple Finches have very curious mating behaviors, and are quite entertaining to watch. Males will hop, sing, and fluff their feathers for an interested female, while holding a small twig or blade of grass in their beak. Next, they propel themselves about a foot into the air with their beaks straight up to the sky (Cole). If the female is impressed, mating may occur after this fabulous display. Female Purple Finches are in charge of building the nest, taking a few days to collect material and finding a perfect spot in a coniferous tree. After laying a clutch of 3-6 eggs, the female will not leave the nest and relies on the male to bring her food. After about 12 days of incubation, the semi-altricial young will be ready to leave the nest in about another 14 days (Wild Bird Watching).

Interspecific competition has a strong influence over species composition in an environment. The House Finch, a very physically similar species, shares a similar niche as well. Since they compete so much for the same resources, research conducted analyzing the population trends of these two species has accrued data suggesting an inverse correlation; that the success of one species may cause the decline of the other (Wootton, 1987). Purple Finches are considered a species of low concern, although their population rates are slowly declining (Cornell).

My name is Aife Pasquale and I made this post as an assignment for the Winter 2019 program Birds: Inside and Out.