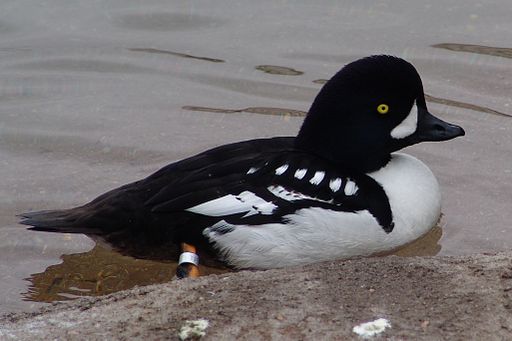 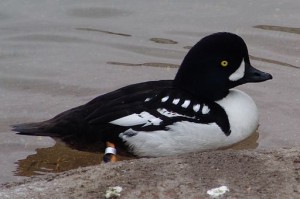 Barrow’s Goldeneye (Bucephala islandica) is a medium-sized diving duck that breeds primarily on boreal lakes and winters on sheltered coastal bays and inlets. It is closely related and morphologically similar to the predictably more common Common Goldeneye (Bucephala clangula) but it is much less abundant and has a considerably smaller range. (Eadie et al, 2000)

Barrow’s Goldeneyes are common wintering waterfowl on the Eld Inlet beaches and waters of Evergreen’s Olympia campus. Goldeneyes can be seen from all Evergreen beaches, but Snyder Cove has the highest occurrence of sightings. They feed close to shore, generally in groups with numbers ranging from two or three individuals to thirty or more birds, with groups of between three and ten ducks being the most common. Sometimes they are seen grouped with Common Goldeneyes (Bucephala clangula) and Surf Scoters (Melanitta perspicillata) but mostly they gather among their own species. They dive at irregular intervals for small fish and crustaceans and occasionally dabble at aquatic vegetation growing on docks and similar structures. The Barrow’s Goldeneyes of Evergreen campus are not as quick to dive as other sea ducks such as the Bufflehead (Bucephala albeola) and usually spend more time on the surface than underwater.
(Peelor, 2012)

Despite geographic and genetic isolation, the eastern and western populations of North American Barrow’s Goldeneyes are basically identical. The only notable difference being, females of the Iceland population do not have as much yellow on their bills as North American birds. (Eadie et al, 2000)

Evergreen’s Eld Inlet beaches are wintering sites for Barrow’s Goldeneyes; they are not here year-round. The highest concentrations of goldeneyes on Evergreen campus are at Snyder Cove. (Peelor, 2012)

Barrow’s Goldeneyes feed in relatively shallow water close to shore by diving and sometimes dabbling on the surface for food. Dives are usually only 1-3 meters below the surface of the water, which is shallow for a diving bird. (“Barrow’s Goldeneye.” Boreal Songbird Initiative)

Barrow’s Goldeneyes are possibly long-lived ducks, boasting a record-holding individual that lived to be 18 years in the wild. Females do not reach sexual maturity until their third year, males until their second or third. (Eadie et al, 2000)

Barrow’s Goldeneyes are monogamous and often form long-lasting pair bonds. Many duck species exhibit behavior of forced copulation, but this is not true for any Bucephala duck. Barrow’s Goldeneyes also copulate during winter and during incubation, likely to strengthen the pair bond. (Savard, 1985)

Pair bonds initially form following elaborate courtship displays in winter and early spring, and if the bond holds the pair will reunite on the same breeding territory and winter territory year after year. Females have a high rate of natal philopatry and return to breed on the same territory where they were born. Bonded male and female goldeneyes defend their shared territory on their breeding and winter grounds, both together and independently. (Eadie et al, 2000)

Tree cavities are the preferred nest site, but Barrow’s Goldeneyes take readily to nest boxes and will also nest in rock crevices, abandoned buildings, vacated burrows, and ground bushes and shrubs. The female lays 6-12 eggs with 9 as the average and incubates for 19-31 days. At the onset of incubation, the male leaves and joins up with other breeding males and non-breeding conspecific ducks for their molt migration. (“Barrow’s Goldeneye.” BirdWeb.)

Precocial young leave the nest after one or two days and are capable of feeding themselves under the watch of their mother. Broods sometimes join other broods in large crèches of mixed families, especially if a female abandons a brood early or if broods become mixed in territory disputes. Both conspecific brood parasatism and crèching behaviors have been observed in Barrow’s Goldeneyes and it is not always clear which behavior is happening. Mothers abandon their young when they are around 5-6 weeks of age, though they do not fledge until 8-9 weeks. (“Barrow’s Goldeneye.” BirdWeb.)

Female goldeneyes are fiercely territorial and highly aggressive when they are with young, and have been observed killing ducklings of conspecifics and related species. Barrow’s Goldeneyes are in general very aggressive and territorial, and when a pair is together they work together to defend their territory. They are most aggressive towards members of the same species, then other Bucephala ducks (which they are consistently dominant over in displays of aggression,) other diving ducks, and then dabbling ducks, though many times dabbling ducks are simply ignored. Defense of territory seems to stem from defense of the food source: the other waterfowl Barrow’s Goldeneyes are most aggressive towards share similar feeding habits and diets. However, only paired birds defending territory show such aggression – non-paired and non-breeding individuals group in flocks and feed cooperatively. (Savard et al, 1987)

Barrow’s Goldeneyes undergo three major annual movements: a spring migration from winter grounds to breeding grounds, a summer movement of the males to their collective molting areas, and a fall migration to the wintering areas. They usually have a later fall migration than other duck species. Paired birds travel to the spring breeding grounds by themselves and reunite with their mate in their traditional territory, while non-paired birds travel in groups. Non-breeding birds sometimes fly directly to the molting grounds, bypassing the breeding grounds altogether. (“Barrow’s Goldeneye.” Boreal Songbird Initiative)

Barrow’s Goldeneyes rely on preexisting tree cavities for nest sites and in this way are tied to the health of the boreal forests where they breed. The main conservation concern for this species is the availability of these cavity nest sites and the reduction of available sites by logging; the greatest threat from forest harvest is in the crucial core breeding area of interior British Columbia. Fortunately, goldeneyes readily use nest boxes, so careful forest management and habitat augmentation via nest box should help mitigate for loss of potential nest sites due to removal of older trees and snags. (“Sea Duck Information Series: Barrow’s Goldeneye.”)

Recreational use and development of lakes used for breeding is another conservation concern. The introduction of fish to fish-less lakes could potentially disrupt goldeneye breeding, as Barrow’s Goldeneyes prefer small lakes that cannot support natural fish life, possibly because of competition with fish over aquatic insects. (“Sea Duck Information Series: Barrow’s Goldeneye.”) (Lake acidification due to human impact may even benefit goldeneyes, because they can survive and thrive in water too acidic for fish.) (“Barrow’s Goldeneye.” Boreal Songbird Initiative)

About the Author
Elisabeth Peelor is an undergraduate student at The Evergreen State College who may or may not just be a bird with thumbs and a keyboard. She is a resident of the Puget Sound region who winters in the San Francisco Bay area. (Sightings have been recorded as far southeast as Florida, but she is primarily a bird of the Pacific Northwest.) Elisabeth requires intact temperate rainforest for nesting and foraging and prefers ready access to large bodies of saltwater. She enjoys wildlife photography, classic rock, literary analysis, and all of the birds everywhere forever with a particular focus on corvids and raptors. She aims to earn a Masters degree in environmental studies and pursue a career in environmental justice and coastal rainforest restoration on the Olympic Peninsula.

Must love scavenging for carrion.