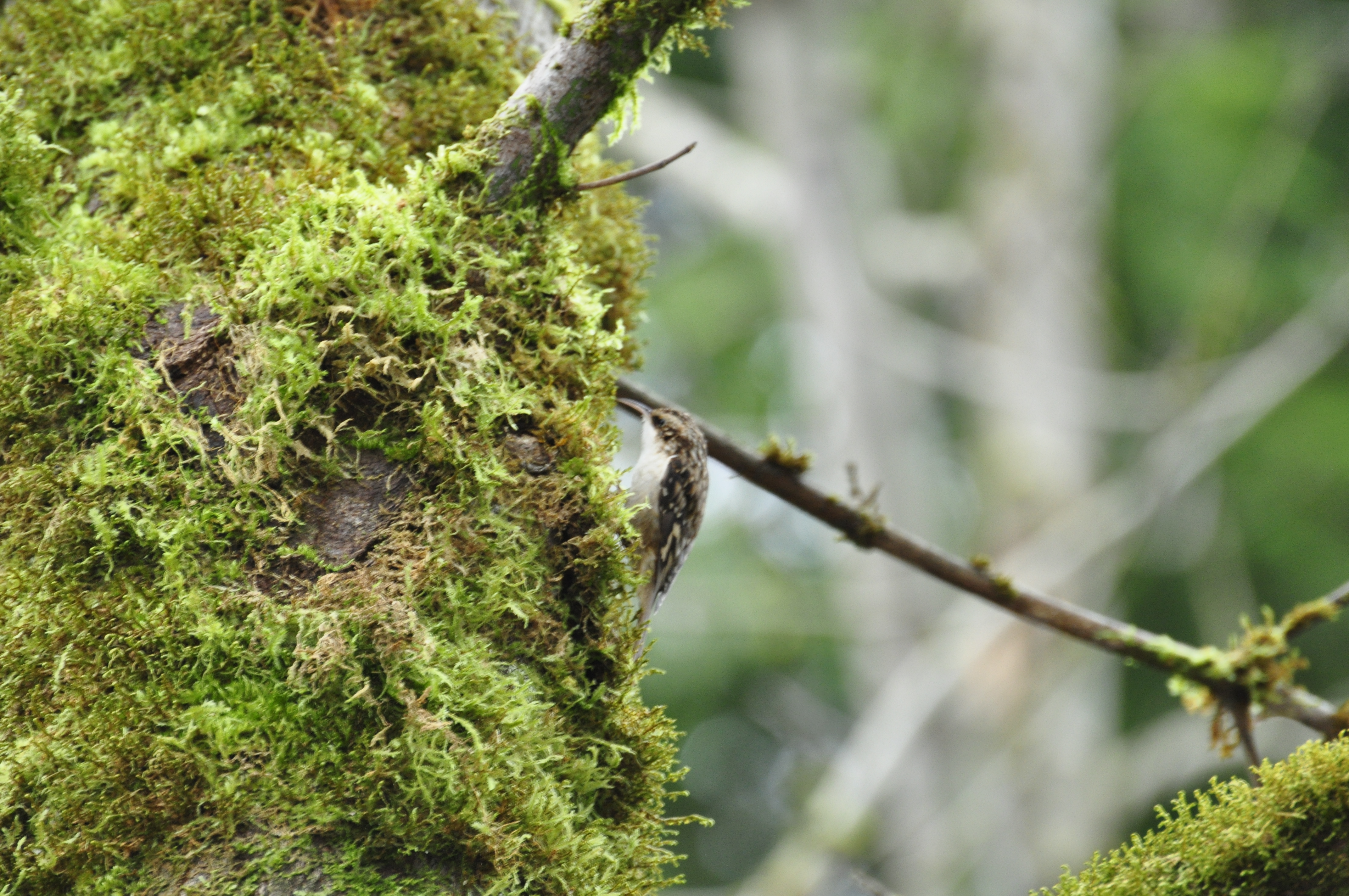 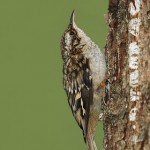 Brown Creepers (Certhia americana) are small passerine birds often found climbing up and around tree trunks. Both sexes are of similar size; weighing anywhere from 0.2 to 0.4 ounces with a body length ranging from 4.7 to 5.5 inches and a wingspan of 6.7 to 7.9 inches (Cornell Lab of Ornithology 2014). Males and females also share morphological coloration and patterning with dorsal mottling of browns and white (Sibley 2003). This works as great camouflage as this is the side primarily exposed as they climb and forage for food amongst trees. Their ventral side is uniformly buffy white. Their curved, tweezer-like bill is used to forage for insects in the crevices of tree bark and associated flora such as moss (Collins, Personal obs. 2014; Weikel and Hayes 1999). It is one of seven Creeper spp. in its family and is the only one found in North America (Sibley 2001). 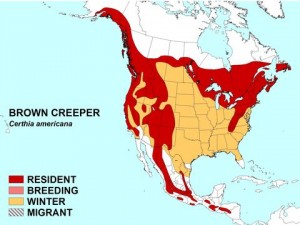 In Washington State, brown creepers are common in all but young forests throughout western Washington. East of the Cascade range, distribution is restricted to the northeast corner of Washington and the Blue Mtns. of southeastern Washington (Seattle Audubon Society 2014). Elevational distribution is to the alpine zone in warmer months with resident birds migrating to lower elevations during winter months. (Poulin et al. 2013). 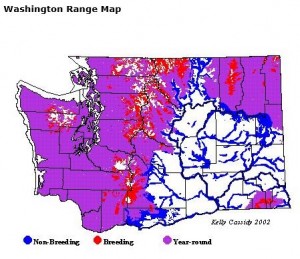 Habitat
Brown Creepers are seasonally selective in their habitat preferences. Depending on their range, Brown Creepers select for mature coniferous, mixed or deciduous forests during the breeding season. In Washington, mesic coniferous forests with a high degree of canopy cover are preferred during the breeding season (Poulin et al. 2013). Habitat selection is less specific during the winter and they will utilize more open forests near populated areas (Cornell Lab of Ornithology 2014). 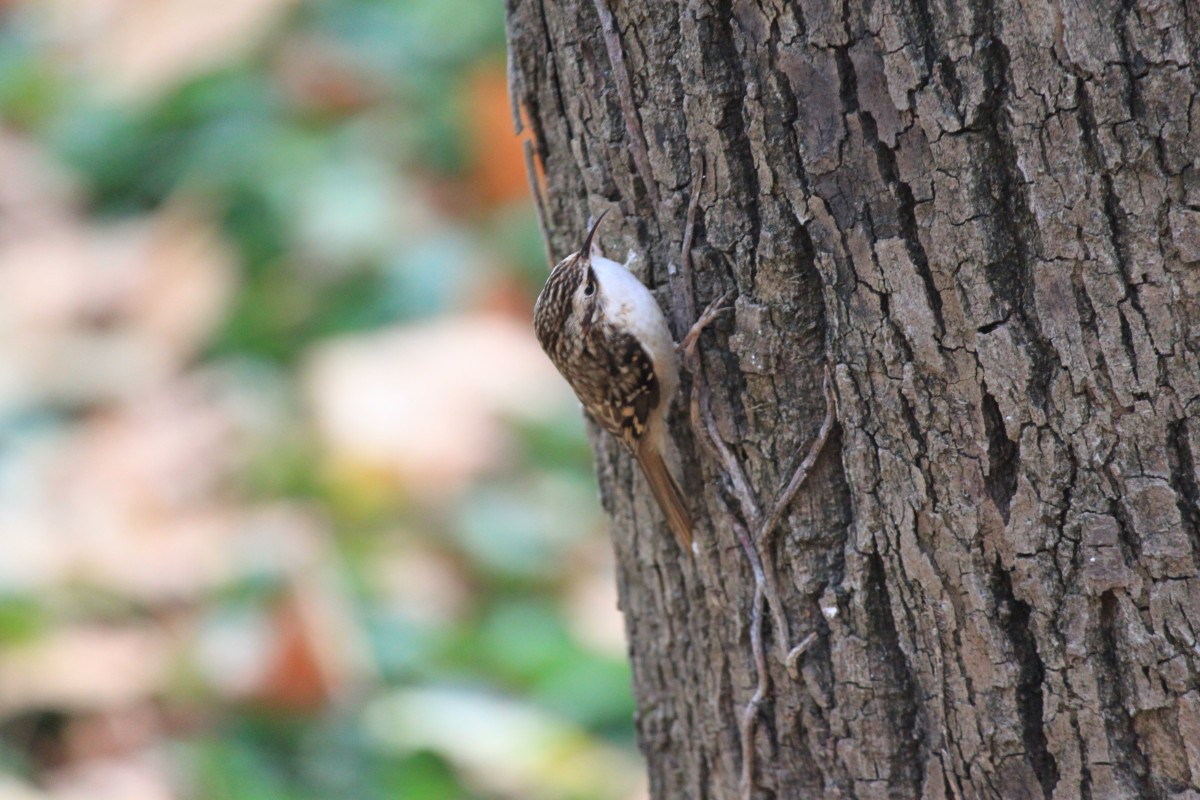 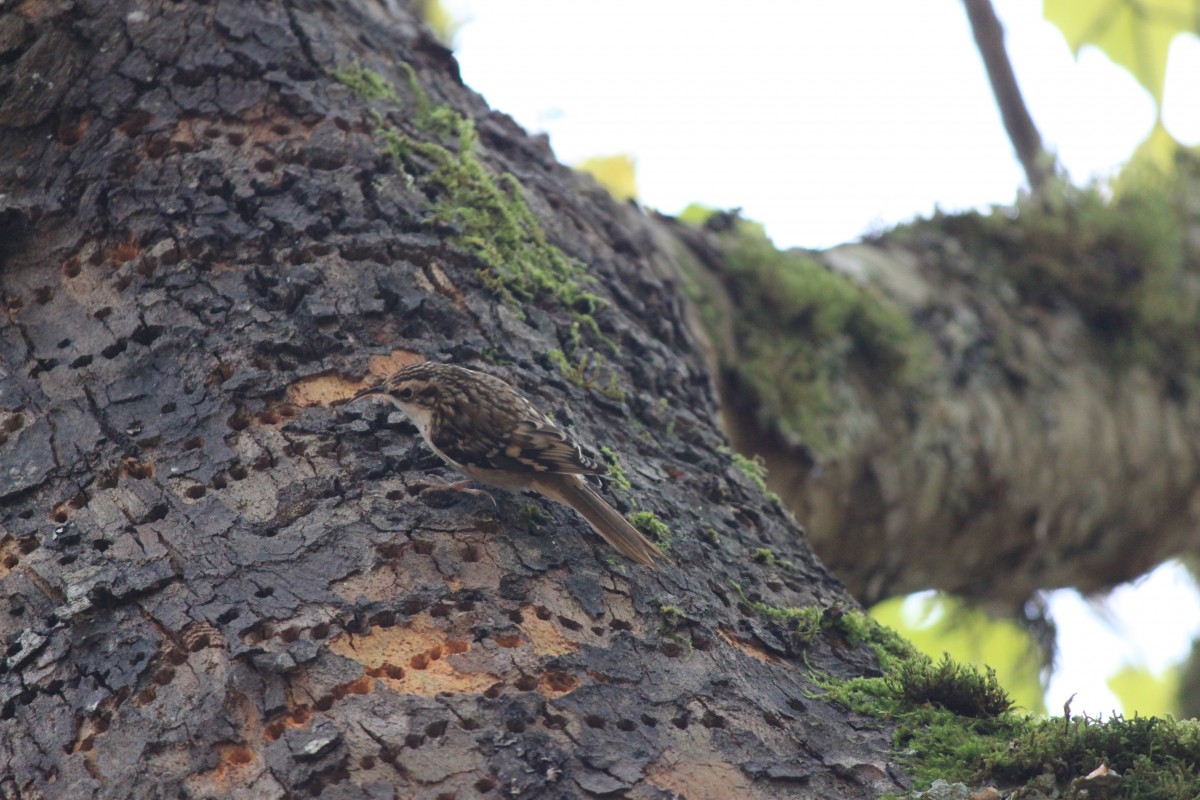 The brown creepers diet is primarily comprised of insects and larvae, pupae, and insect eggs that they glean from the crevices of bark (Franzreb 1985). During the winter months when insects are scarce, they will expand their diet to include seeds and other vegetation (Poulin et al. 2013). It has been noted that the brown creeper prefers to forage larger trees. This most likely occurs for several reasons; there is a larger area to cover while foraging, it would conserve energy to not have to fly to different trees as often, and general higher concentrations of prey in the crevice rich bark of an older tree (Franzreb 1985).

Sounds
It can be difficult to distinguish the sounds of Brown creeper from that of Golden-Crowned Kinglets and Black-capped Chickadees, especially because of their mixed species flocking habits (Ficken 2000). They have a high pitched dashed weee-weee-weee call that is more drawn out than a Kinglet and have a more sporadic song (Rhodes, Personal Obs. 2012). Here are several recordings with sonograms of the Brown creeper for reference:

Behavior
Brown Creepers are easily distinguished from other songbirds by their unique foraging behavior. Using their long tail for vertical support (similar to woodpecker spp.), the brown creeper is often observed hopping up a tree bole as it spirals from the base foraging for insects. They will often fly to a nearby tree to begin the process over again, although some individuals have been observed to forage the same tree again before moving to the next (Collins, Personal obs. 2014). Canadian and U.S. populations breed April to July (Poulin et al. 2013). Females construct the nests, often taking up to a month to complete (Sibley 2001). Nests are hammock-like with one end connecting to the tree and the other to a loose piece of bark (Sibley 2001), and are often built in dead trees/snags (Weikel and Hayes 1999).They typically nest at least 100m in from the forest edge to decrease nest predation from species associated with forest edges (Olson et al 2009). Brown Creepers have 1 brood per year with an average clutch size of 5 to 6 eggs (Cornell Lab of Ornithology 2014). Females Incubate the eggs for 15 to 17 days (Poulin et al. 2013). Both sexes are active in feeding nestlings until they fledge and can forage independently (Cornell Lab of Ornithology 2014). Males are territorial during the breeding season, but territoriality ends after the breeding season (Sibley 2001). During the winter months, creepers will often communally roost and join mixed species flocks composed mostly of Black-capped Chickadees and Golden-crowned Kinglets to forage (Sibley 2001; Lima and Lee 1993). On occasion, C. americana has also been observed hanging from branches to shelter from heavy rain (Rhodes, Personal obs. 2012).
Population Trends and Conservation Issues
Brown Creepers have protection under the Migratory Bird Treaty Act (MBTA). The treaty prohibits the taking, killing, or possession of any migratory bird, product, or nest item without special permission (U.S. Fish and Wildlife Service 2013). Though brown creepers have limited protection under the MBTA, no other protection has been provisioned.

Populations throughout their North American range currently appear to be stable and of least concern (North American Breeding Bird Survey; IUCN 2012). Declines tend to be isolated to local populations due to habitat destruction and reduction (Poulin et al. 2013).

Conservation issues include intentional insect removal on managed lands reducing food availability (D’astous and Villard 2011), habitat fragmentation and increased edge effects from logging, urban development (Brand and George 2001), and habitat modification for the conservation of other species such as those in the Turdidae family (Poulin et al. 2008). The brown creeper is an indicator species for old growth forest habitat (Poulin et al. 2011). Logging practices where > 55 percent of the trees are retained can mitigate the short term effects of logging on brown creepers in irregularly structured mature forests (Le Blanc et al. 2010). However, D’Astous and Villard (2012) found that in northern hardwood forests, food provisioning rates tended to decrease in treated plots where the foraging substrates were less dense. With the high energetic costs of breeding, this could have long term impacts on adult and nestling survivorship.

In Washington State, breeding populations appear to be stable and don’t seem to have significantly changed in the last 20 years (North American Breeding Bird Survey). Winter populations however, appear to be increasing. One possible explanation could be that more individuals from northern populations are wintering in Washington and higher, elevational summer residents are moving lower in winter. Winter bird feeders may also contribute to the positive winter population trend by increasing winter survivorship. 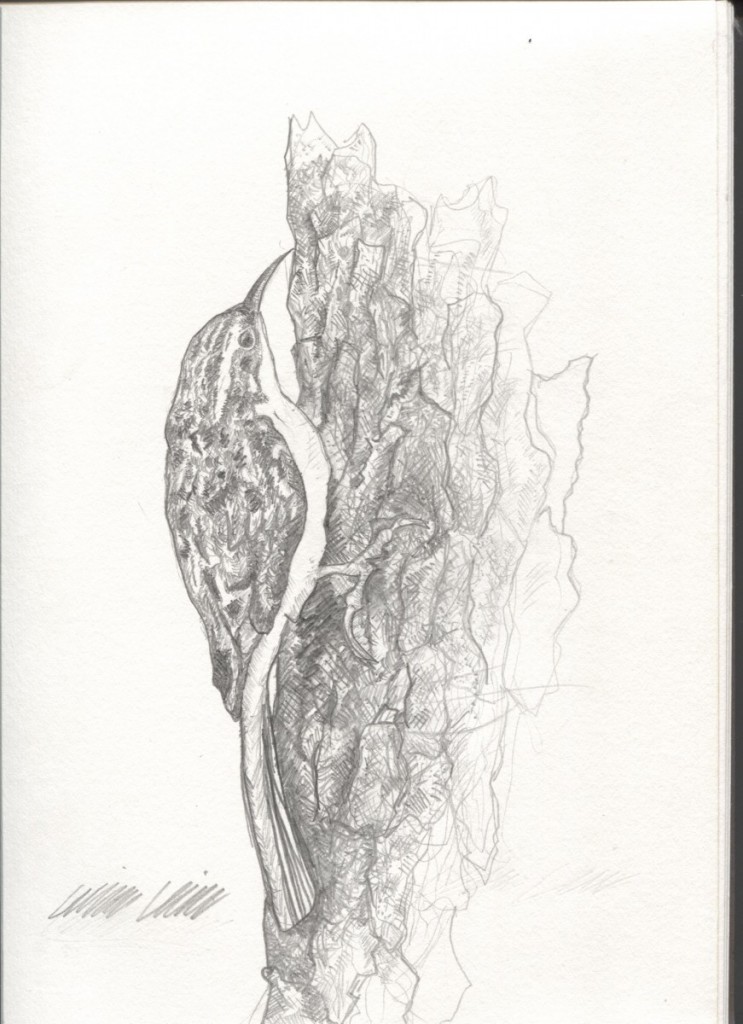 Field sketch by Will Uriu December 2014

Brown creeper spotted on the edge of a mostly deciduous wooded area and small field of the Evergreen woods with good sunlight. It was amongst a mixed flock composed of both golden-crowned and ruby-crowned kinglets.It was seen climbing vertically up small red cedars, slowly spiraling around the trunk probing amongst the bark. The flock dispersed from the location and I lost track of the Brown creeper as this occurred.

Found amongst mixed flock of kinglets and chickadees on the edge of a sunny and mostly deciduous wooded area and a road of the Evergreen woods. Mostly foraging on smaller red cedars but kept going to one very large Douglas fir.The flock dispersed when a large loud group of people walked by.

Brown creeper was found at the entrance to the organic farm path amongst a flock of golden crowned kinglets, on the edge of a shady and mostly coniferous wooded area. It was observed probing the moss at the base of branches as well as the bark on several different Douglas firs, one red cedar, and one big leaf maple. On several occasions the creeper climbed to great heights within the Douglas-fir and I lost track of it on several occasions. At one point the Brown creeper was observed landing only a few feet from the ground on one of the Douglas-firs. It was also observed on several occasions climbing out on branches, hanging upside down and foraging amongst mosses and lichens. It rarely went past the halfway point of the branch and would often fly back to the trunk of the tree.

Heard before seen in a riparian deciduous forest made up of mostly cottonwoods. Found amongst a mixed flock of golden crowned kinglets and both black-capped chickadees and chestnut backed chickadees. Seen briefly climbing and flying between three big leaf maples and foraging amongst moss. Lost site of the brown creeper for an extended period of time but could still hear it calling. Seen again on a small red cedar probing amongst more moss. After a few minutes it flew away.

Encountered two brown creepers at once climbing a large cottonwood tree amongst a large mixed flock composed mostly of chickadees. When the brown creeper at a lower height noticed the one climbing higher, it chased it around the tree and off onto a smaller cottonwood in very close proximity. This cottonwood was dense in branches covered in lichen which is where the creeper primarily foraged.

At least two brown creepers were observed during a walk through the Evergreen woods in a mostly coniferous area comprised mainly of Douglas-fir. I heard the trill call of a brown creeper amongst a mixed flock of kinglets and chickadees and played a brown creeper call to see if I could get a reaction. Two brown creepers flew to two large Douglas-firs within a close proximity of where I stood. They continued to climb and probe amongst the bark and moss unbothered. One climbed upside down on a branch probing amongst lichen. Eventually one flew from its original tree to the tree the other brown creeper was climbing. I noticed that once the one at a lower elevation noticed the one climbing higher, it flew up and chased the other one in a spiral motion away from the tree.

I observed two Brown creepers in a small patch of Douglas-firs in the middle of campus of The Evergreen State College. This was the first time witnessing any Brown creepers not grouping in with a mixed flock. Both were quite vocal during the brief time watching them; letting out short trill calls as they foraged amongst the trees. One of the creepers remained on the largest of the Douglas-firs until climbing high up and out of view. The other flew between three smaller Douglas-firs occasionally rapidly probing amongst the bark.

While walking by another small patch of campus I noticed a mixed flock of kinglets and chickadees flying amongst the branches. I decided to stop and see if any Brown creepers were amongst them. Within a few minutes I heard the distinct call of a creeper. Shortly after, I saw it climbing the trunk of the largest Douglas-fir amongst the patch of trees.

During a walk around the edge of the Evergreen woods, I encountered a mixed flock comprised mainly of golden crowned kinglets on Driftwood Rd. NW. I decided to stop and see if I could find any brown creepers amongst them. First I heard the distinct call and then I saw one climbing up the side of a red cedar. It quickly spiraled around the trunk and out of site. Shortly after I saw it fly down onto a big leaf maple about five feet from the ground. It foraged through some thick moss growing on the tree. The flock slowly moved a brief distance down the road. I left as it was quickly growing dark outside.

I decided to walk around campus and see if I could find any brown creepers in more open areas such as a single tree on red square. After having little luck I heard a brown creeper as I was walking by the dorms. I quickly spotted it on a Douglas-fir in a small patch of mixed trees. Close by were several kinglets high up in the tree and a hairy woodpecker. The brown creeper remained in this area for a long period of time sticking mainly to the large Douglas-firs within the patch.

About the Author
Stuart Rhodes is a student at The Evergreen State College.  He is studying biology and has become fascinated with the world of birding and ornithology.

Revised and edited by Kellene Collins 2014.

Revised and edited by Will Uriu 2014