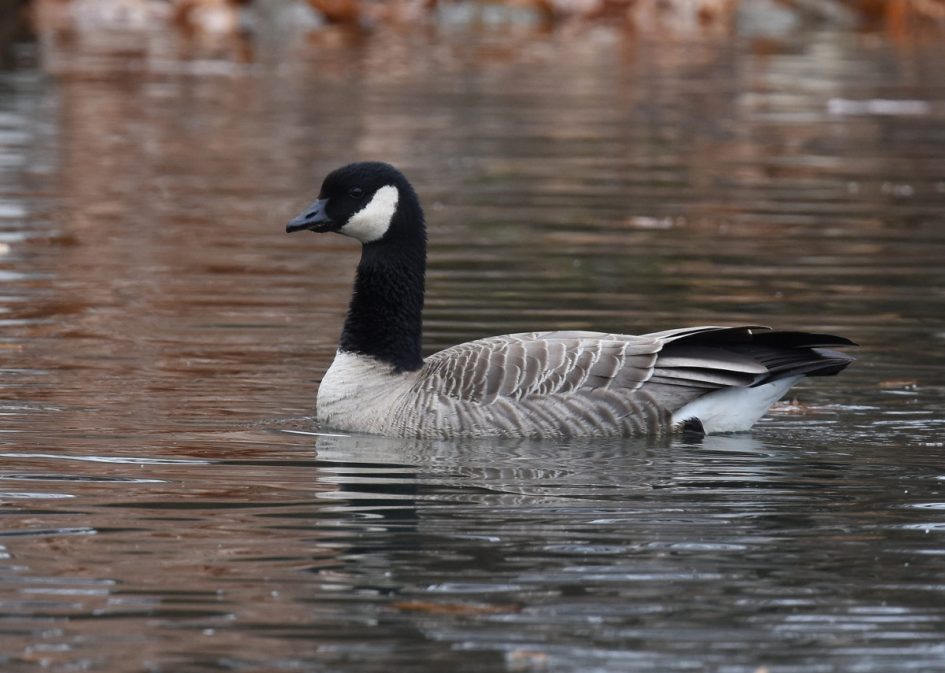 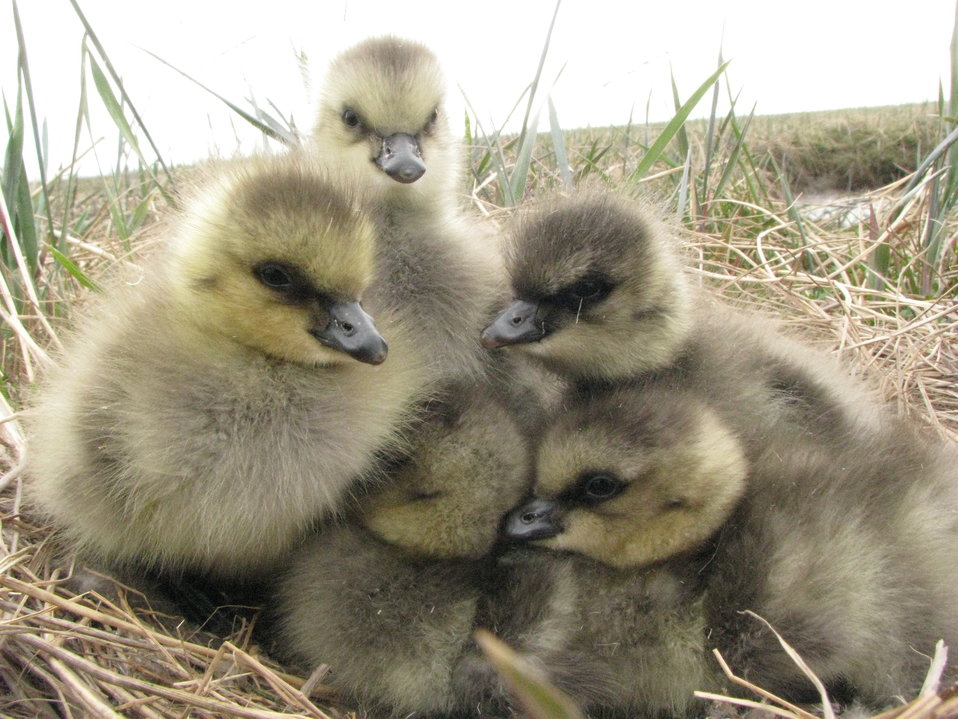 The Cackling Goose, Branta hutchinsii, is a medium to large bird. Once thought to be a small subspecies of Canada Geese, in 2004 DNA sequencing resulted in them being considered their own species (Banks et al., 2004). Currently, there are four subspecies of Cackling Geese. This includes Aleutian Geese, Taverner’s Goose, Cackling Geese, and Richardson’s Geese. The Aleutian Geese was once considered an endangered species, but in recent years conservation helped to stabilize the population. 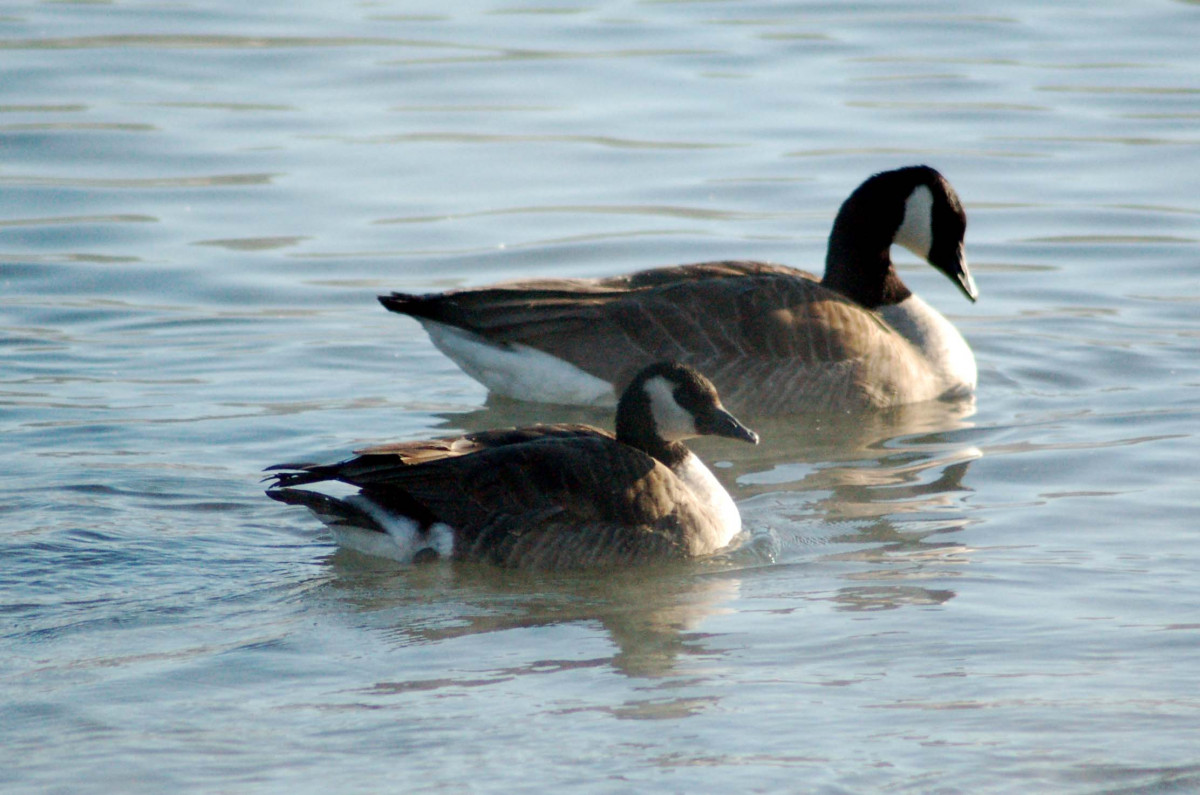 They have a black head and neck, with a white chin strap that follows upwards to behind the eyes. This is a distinguishing feature of a white cheeked goose. The dorsal side of the body is a grey-brown coloration with the feathers tipped in a lighter off white-brown color. The chest and belly is a off white with grey-brown ‘banding’. The undertail coverts are bright white. They have dark black bills, and dark black-brown eyes. Each individual can be slightly different in contrast and coloration.

Distribution and Migration
Cackling Geese are abundant in North America. According to Audubons’ Christmas Bird Count of 2018, the Cackling Goose was observed in Olympia, Washington 2746 times. The highest bird count was in Sauvie Island, Oregon with 39865 individuals. 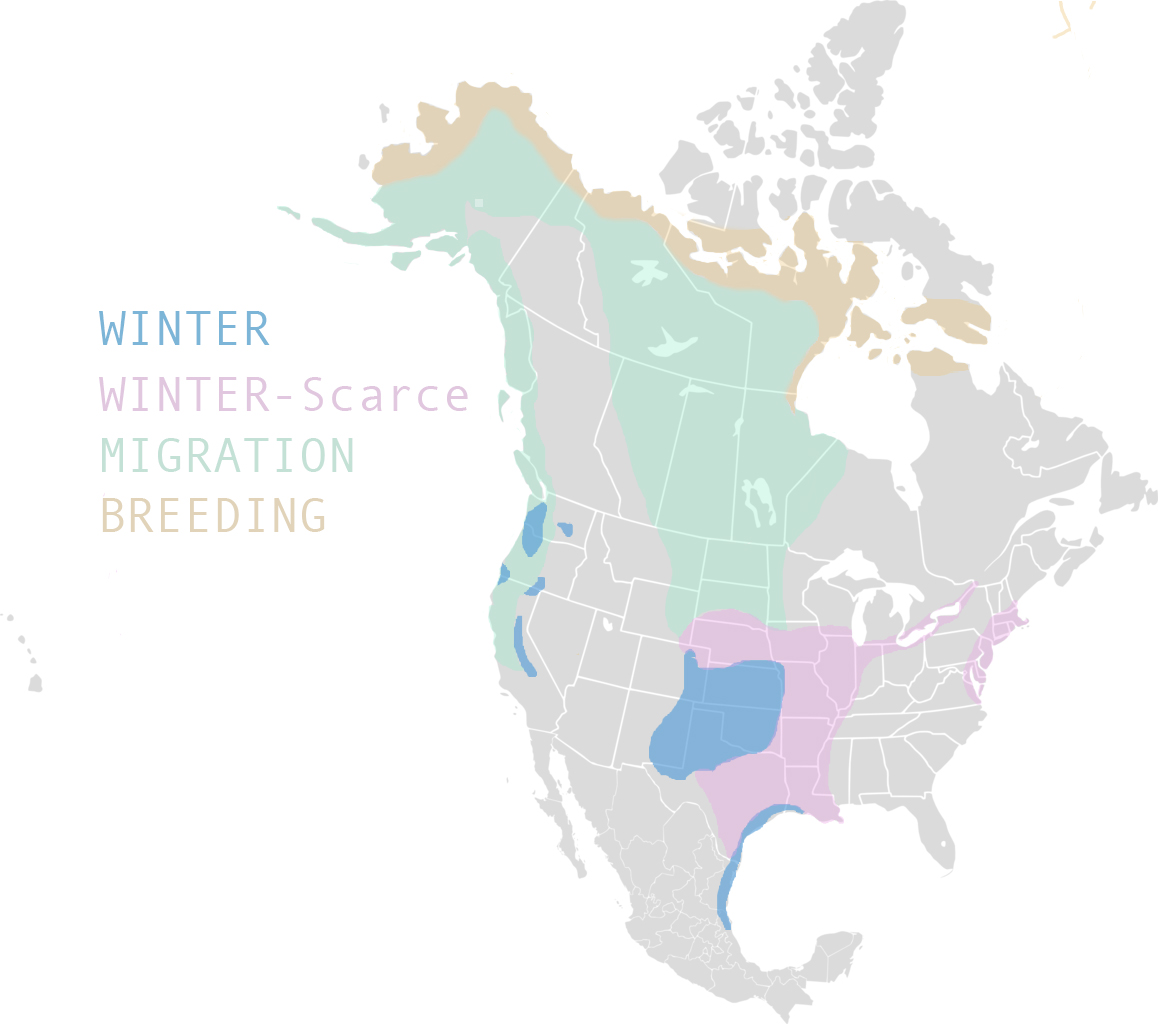 They are medium to long distant migrants, which have minor stopping points. Originally thought to only have breeding grounds in the most northern part of Canada, it has now been noticed that individuals will nest throughout all of Canada and the 48 continental states of the United States (Rusch, Malecki, & Trost, 1995). Although they can be seen nesting in many places, the majority if individuals still migrate and nest in Northern Canada.

Since Cackling Geese often have their breeding areas in the northern arctic regions of Canada, they are not far from Canada Geese, which breed in the sub-arctic areas of Canada. The two species’ breeding grounds overlap, which creates a very small area that hybridization can occur. The geographic location of this area is approximate to 59°N and 60°N (Leafloor, Moore, & Scribner).

There are three times migration occurs. This includes fall migration, spring migration, and molt migration. Fall migration starts in the late stages of August, with returning dates in late September and early October. Spring migration starts around the middle to end of April, and ends around the middle of May. Molt migration usually consist of non breeding geese within their first 1-2 years, but will include individuals who did not mate. They will make their way to the north areas where more fatty foods, such as berries, are available. 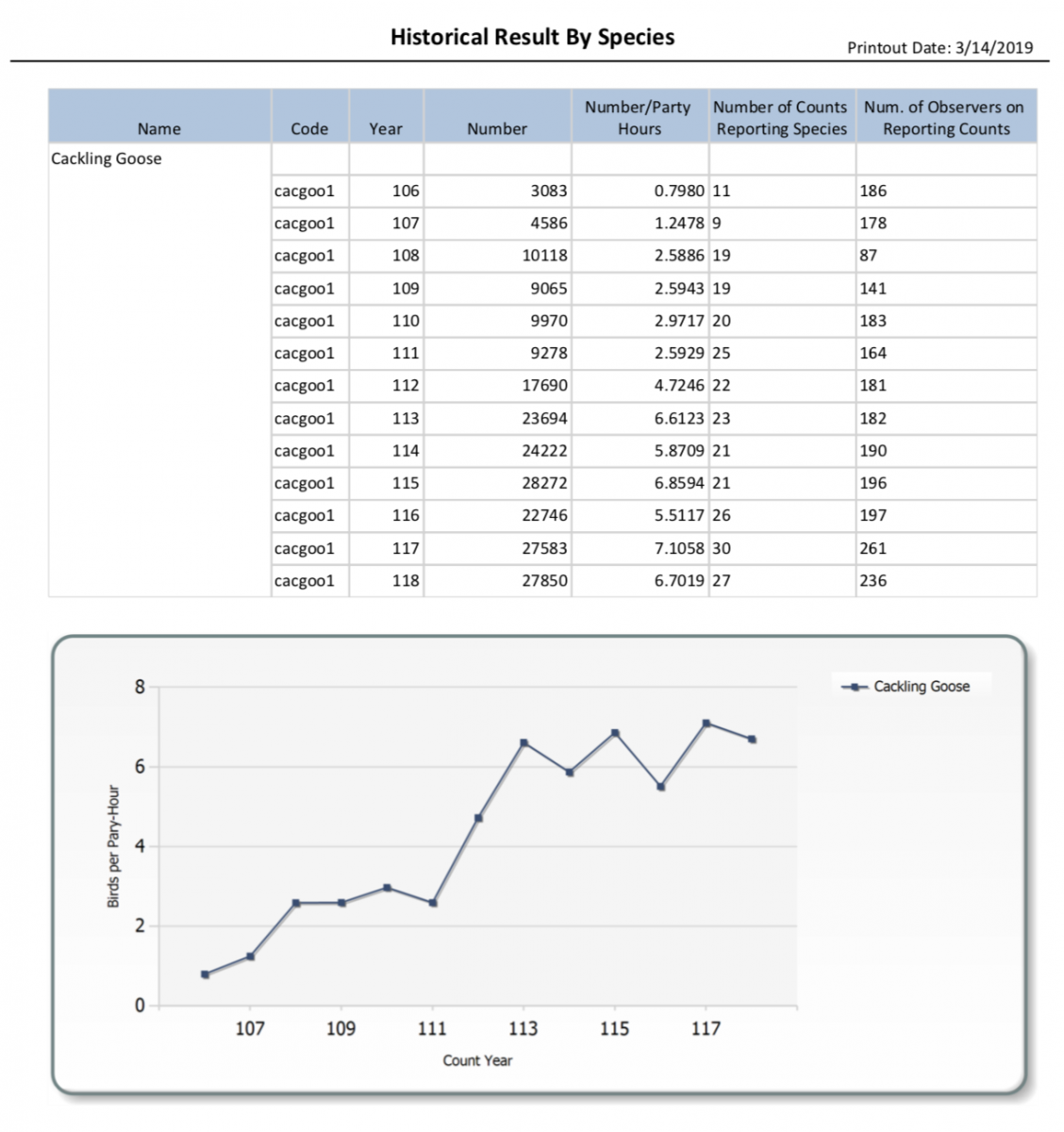 Habitat
The habitat of the Cackling Geese only slightly varies depending on what time of the year it is, and whether it is during migration or not. They are usually not too picky, which results in them sometimes inhabiting common area parks, backyards, and agricultural lands. Cackling Geese are versatile and hardy birds, which allows them to survive in many different types of weather and environment. 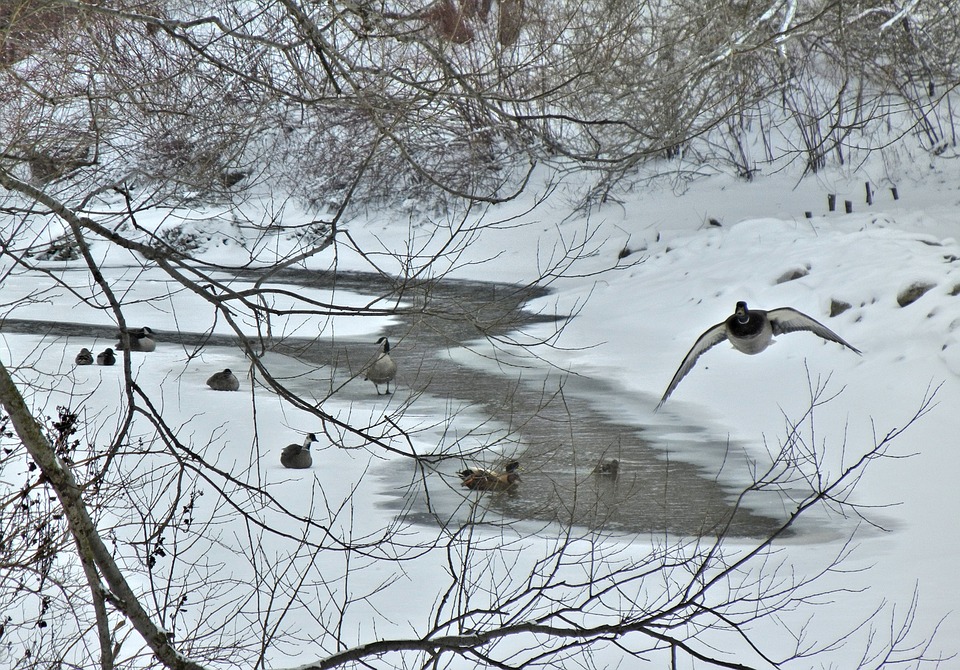 When not in the arctic breeding grounds, Cackling Geese can often be found in wetlands, marshes, lakes, rivers, and grasslands. They often sunbathe, so they can be noticed in open grass fields. During breeding and migration times, they can be seen in snow and ice covered grasslands and marshes, or on the ocean’s coastal regions. The tend to stay near bodies of water and foraging options.

Food Habits
Cackling Geese are herbivores eating mostly grasses and sedge with some integration of seeds and berries. What they eat greatly depends on the time of year, what’s available, and energy needs. 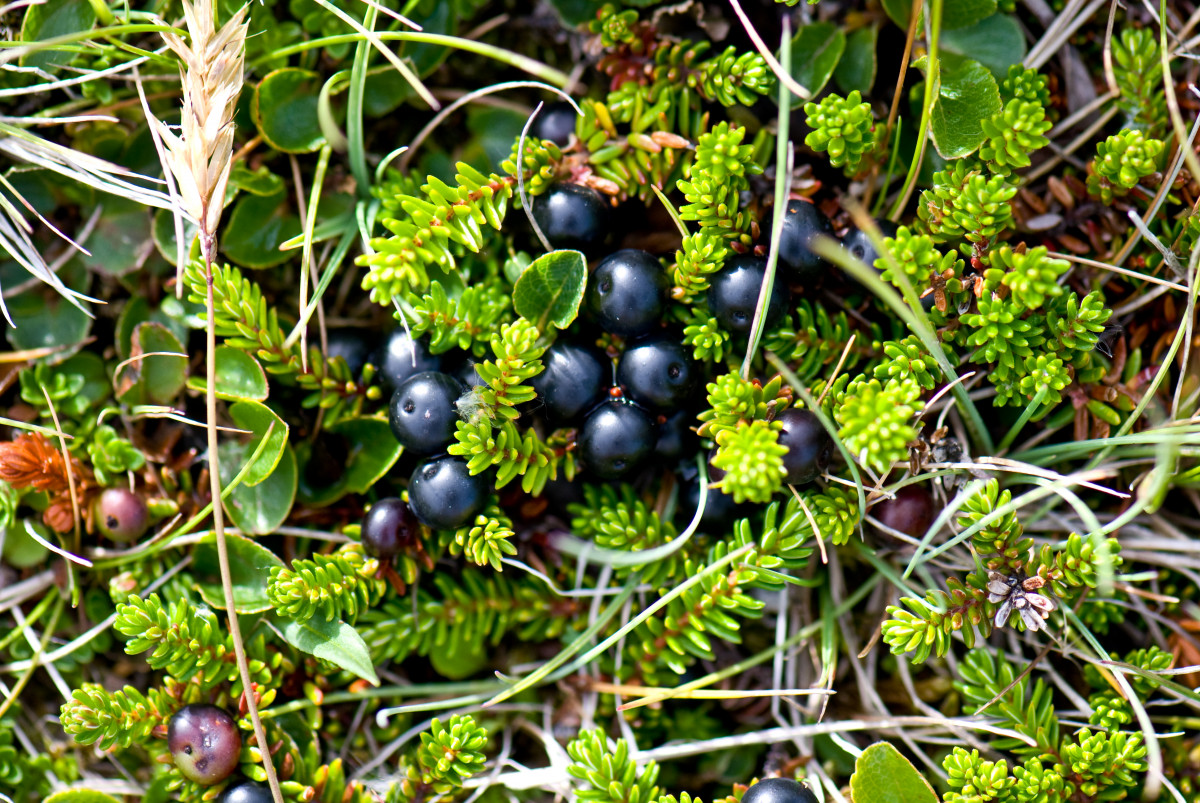 During times of brooding and raising young, Cackling Geese have a preference of Arrowgrass (Sedinger & Raveling, 1984). Arrowgrass is sought after because of the high protein content, as well as the substantial energy. During pre-migration and migration, they will often feed on available Crowberries and other available berries (Hupp, Safine, & Nielson, 2012). Berries are sought after during these crucial times because of the high fat and energy content.

Times where migration and brooding is not occurring, many geese will feed on other available grasses and agricultural grains. In large agricultural fields created by farmers, Cackling Geese can be considered a nuisance. Cackling Geese can eat multiple sources of seeds while foraging, which sometimes results in the seeds being dispersed by feces onto agricultural land (Ayers, DePerno, & Moorman, 2010). In some cases the seeds will grow, causing unwanted weeds and grass. This can negatively impact their crops, live stock, and time. 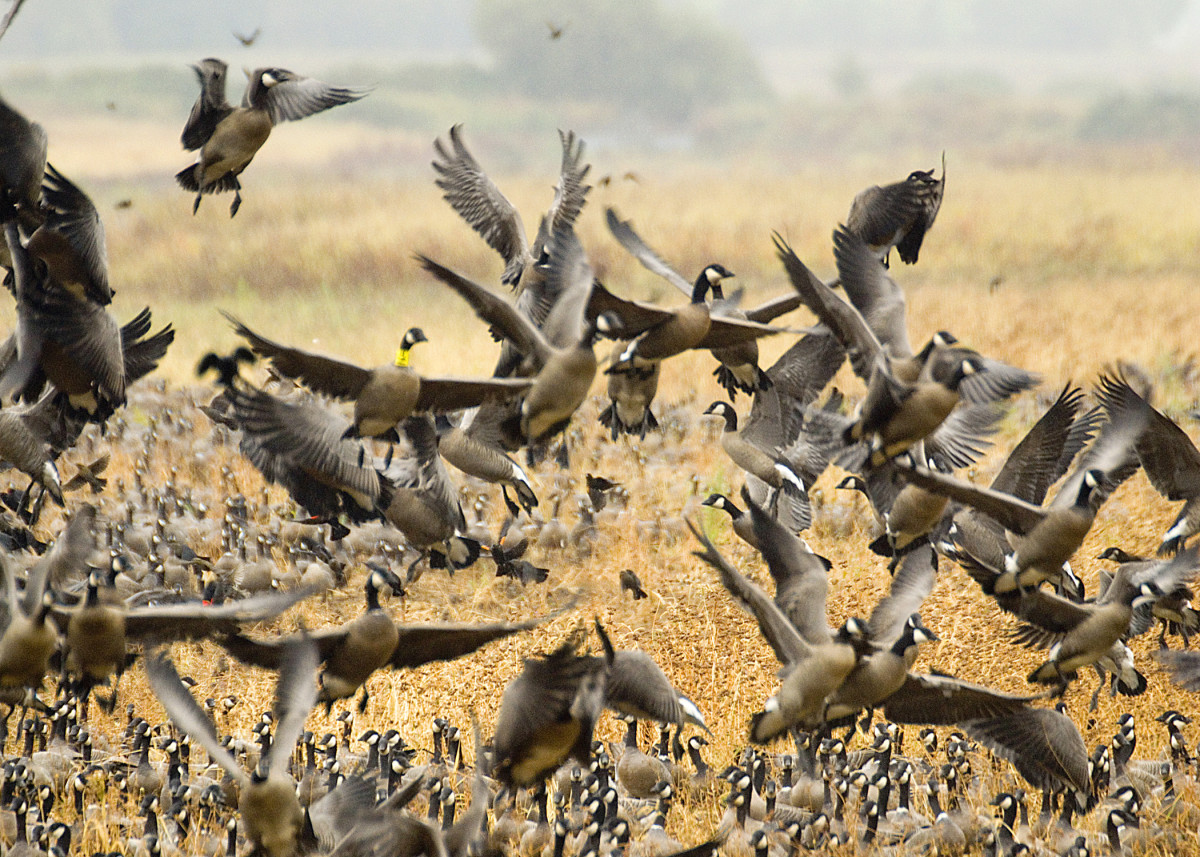 Photo by Rick Swart, Oregon Department of Fish and Wildlife

Unfortunately, with the recent split that Cackling Geese have undergone, not much is known from their behavior apart from what was studied when they were still considered Canada Geese.

Cackling Geese are migratory birds, which results in long distance flying to breeding grounds. They will often fly in large clusters if flying small distances, such as from pond to pond. But, when in migratory flight individuals make a “V” shape pattern. This allows for better communication as well as better aerodynamics (Badgerow, 1988).

They are known to not only be strong migratory flyers, but strong swimmers as well. Individuals can dive and swim underwater, with newly hatched young being able to do so only after a few hours. 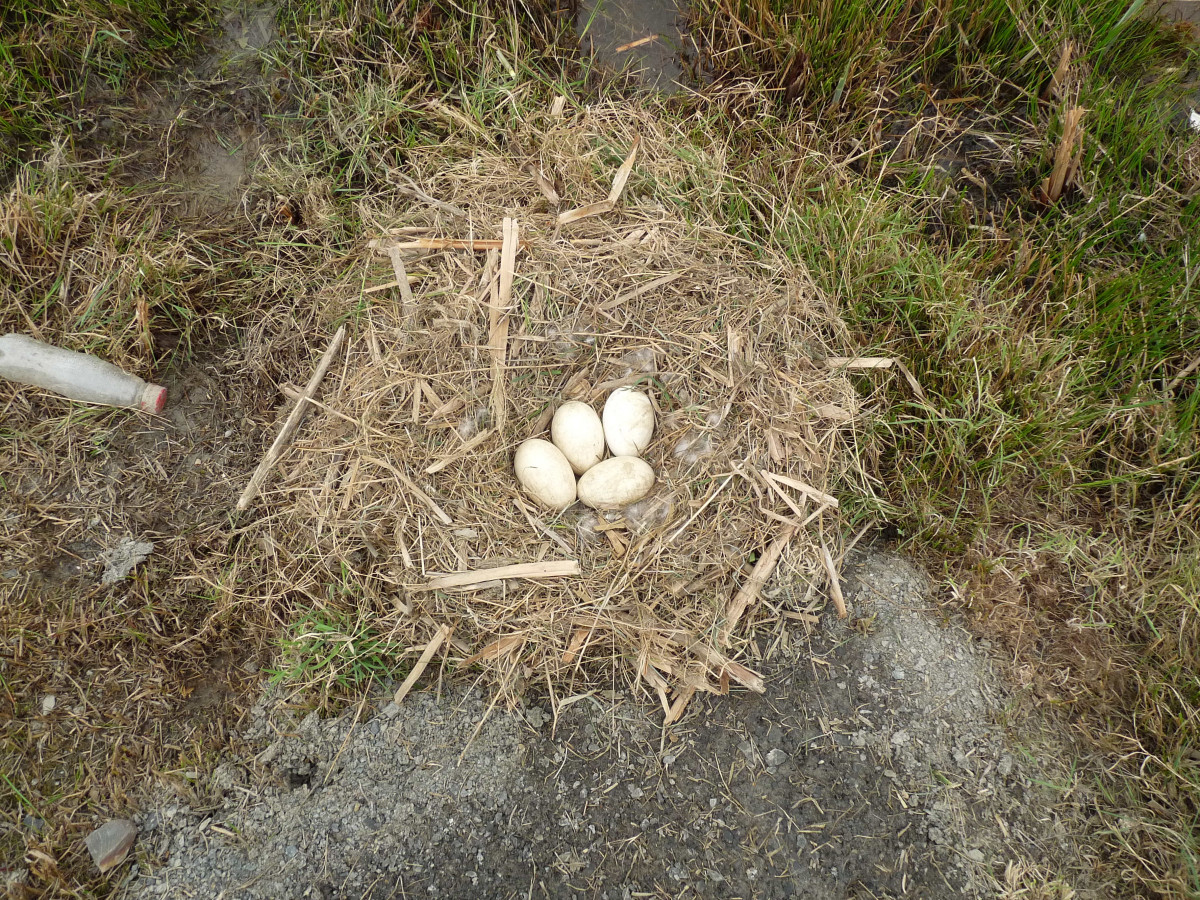 Like many geese, the Cackling Goose form monogamous pairs. Majority of these pairs will stay together until the death of one, in which the other individual may seek out another mate (Hanson, 1953). These pairs will raise and protect their nest together for the best chance at nest survival (Jarvis & Bromley, 2000).

Three individuals casually walking next to the gravel path of Nisqually. They would pause every so often to graze on the grass for a few seconds. After about 7 minutes of this they stopped at one location, one individual layer down while the other two grazed. 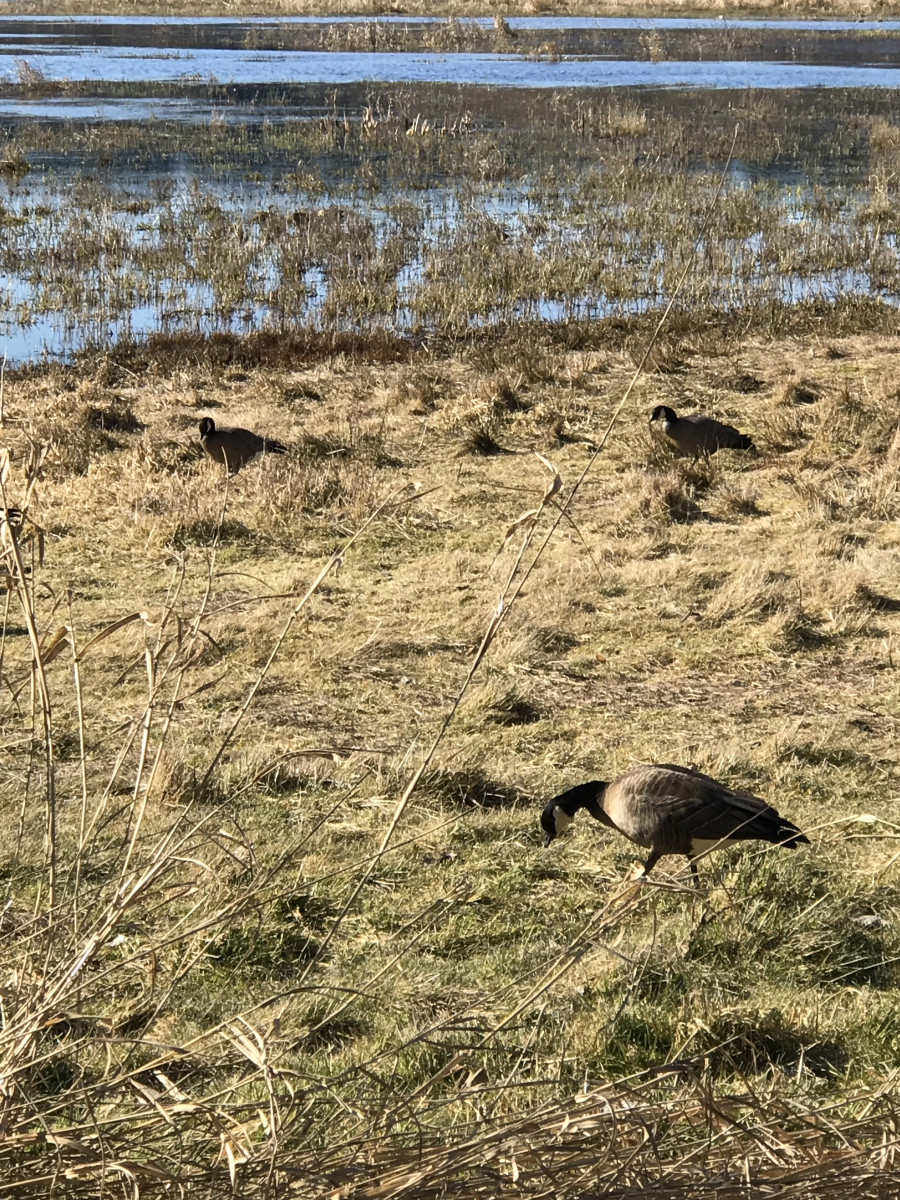 They were located on the banks of the water with medium height grass in the surrounding areas. Three individuals were visible, possibly more in the grasses behind them. They seemed to be grazing. Unfortunately to the distance of the Geese, I was unable to see small details of behavior.

While walking back to the entrance of Nisqually I heard several geese calls. While getting closer to the Twin Barns area I notices a large flock of roughly 200 individuals. They were grazing and calling. Over the next 10 minutes more individuals joined them. These new individuals would come in flocks ranging from 3-40 individuals. While watching the grazing behavior I noticed that they slowly moves in a large circling pattern. 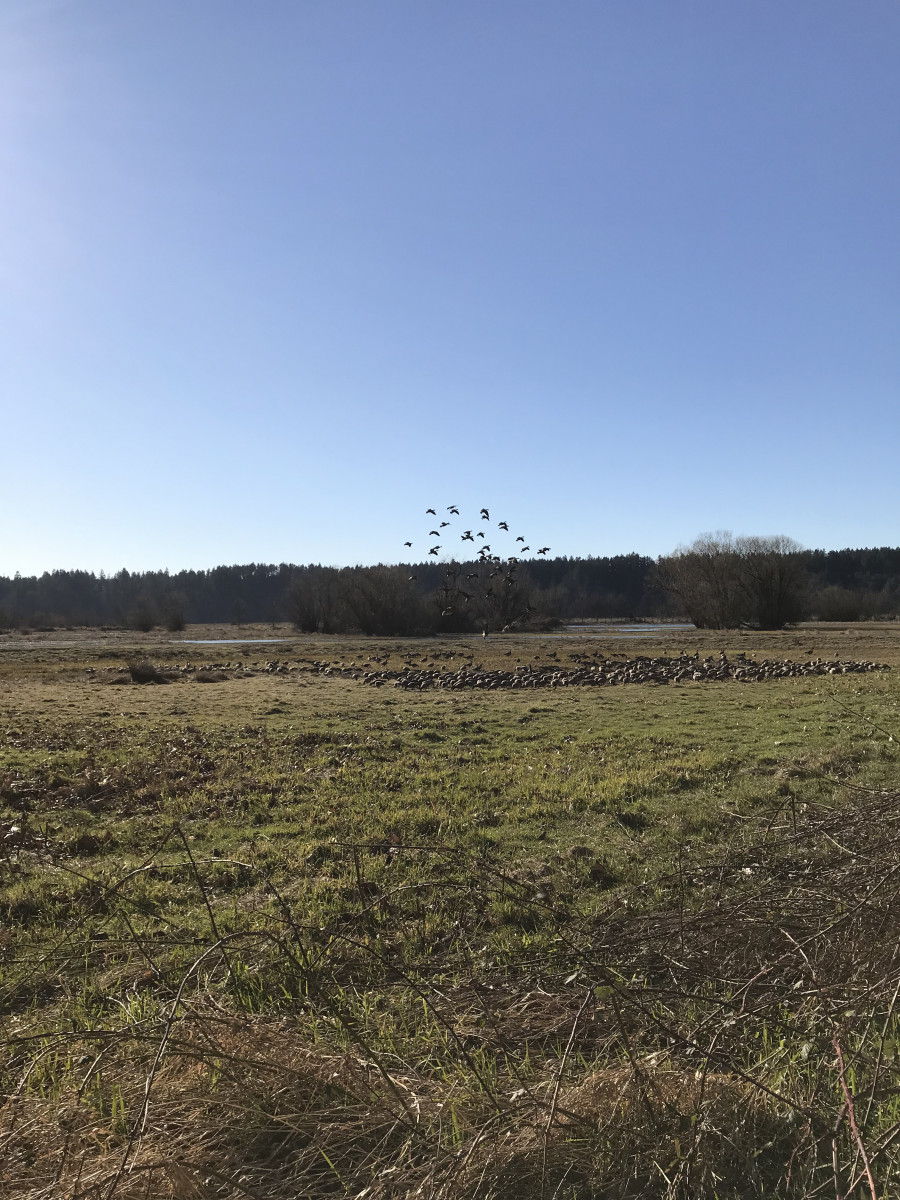 Population Trends and Conservation Issues
Cackling Geese are not considered a species that is viewed as a concern. Although the subspecies, Aleutian Geese, was once on the endangered species list. According to the U.S Fish & Wildlife services, Aleutian Geese was an outstanding conservation recovery. This group of geese are found off the coasts of California and once had less than 800 individuals. This decline was to an introduction of arctic foxes, which quickly became their top predator. With massive conservation efforts, there are now more than 150,000 individuals. With the population doing so well, they can now be hunted on private land in limited amounts during hunting seasons.
Literature Cited

About the Author
Gelane Clements is a student at The Evergreen State College, pursuing a Bachelors in Science with an emphasis in Zoology.