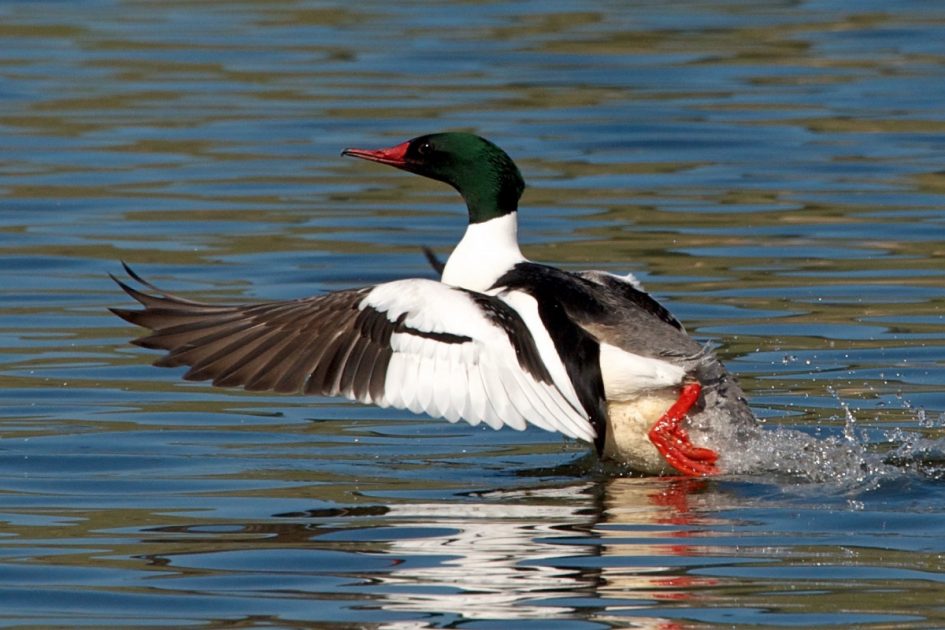 The Common Merganser (Mergus merganser) is a medium-large bodied piscivorous duck of forested rivers and lakes throughout the northern hemisphere. There are 3 subspecies found throughout its range, each with slight plumage and anatomical differences, including M.m. americanus of North America, M.m. merganser of Europe and Northern Asia and M.m. orientalis of Central Asia (Pearce, Mallory, & Metz, 2015). M.m. americanus is known as the Common Merganser while the subspecies of Eurasia are commonly called the Goosander. The terms “Common Merganser” and “Goosander” will both be used on this page correlating to the subspecies’ information from specific studies.

Males in breeding plumage can be identified by their dark green head, black back, and white chest and sides. Females and non-breeding males have a gray body, cinnamon-brown head with a shaggy, mullet-like crest, white chin, and a cleanly delineated white lower chest. The feet and long, thin bills are a vibrant, dark, orange-coral color. Their closest relative and possible look-alike in North American is the Red-breasted Merganser (Mergus serrator) (Pearce et al., 2015). The Common Merganser is slightly larger, with a distinct white chest and less of a crest on the male compared to the Red-breasted Merganser. 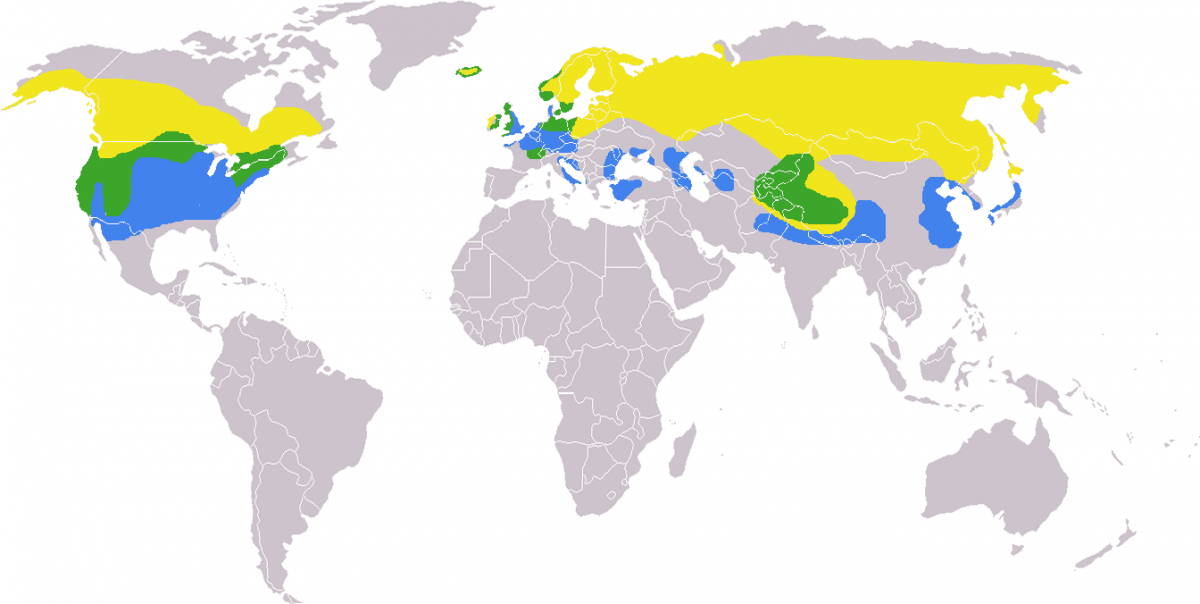 The combined range of all three subspecies extends around the globe, concentrated in North America, Europe, and north and central Asia (Pearce et al. 2015). Habitat requirements for nesting and foraging determine the overall range of the Common Mergansers. For example, cavity-nesting is a major influence in distribution patterns occurring up to the boreal tree-line as compared to the ground-nesting Red-breasted Merganser, which has a more northern range (Pearce, McCracken, Christensen, & Zhuravlev, 2009).

Over their wide geographic range there is some variation in migration patterns. Generally, Common Mergansers are tolerant of cold conditions and therefore have a relatively short and small window of migration to and from wintering grounds (Pearce et al. 2015). However, some adults have been tracked with migratory distances of up to 2000 km (Pearce & Petersen, 2009). Studies indicate that Common Mergansers of interior North America may have longer migrations than coastal groups (Pearce et al., 2015). Changes in ice cover due to climate change was studied in the Odra River Estuary of Poland and showed that piscivores, including Goosanders, may be shortening their migration distances in response to the increasing availability of open water (Marchowski, Jankowiak, Wysocki, Ławicki, & Girjatowicz, 2017). In addition to climate change lessening the amount of winter ice coverage, anthropogenic clearing of ice for transportation allows the piscivores additional access for foraging, with the potential to alter migration patterns (Marchowski, et al., 2017).

In a DNA study of adult Common Mergansers across North America, Russia, Denmark and Scotland, it seems that female philopatry is the strongest driver of population structure (Pearce, McCracken, et al. 2009). Non-breeding distributions were shown to be affected by migration, molt, prey availability, and weather conditions (Stocking, Bishop, & Arab, 2018).

Dispersal of juvenile males and a more limited female migration pattern may also play a role. Little is known about juvenile dispersal of waterfowl under 2 years due to the difficulties in tracking, especially the high mortality rate of juveniles. One small study beginning in Kenai region of Alaska, tracked eight hatch-year birds through the post-fledgling fall months, and recorded them staying in their general natal region that year (Pearce & Petersen, 2009). Only 2 birds-1 male and 1 female-survived into the second year. Substantially different movement patterns were recorded between the genders in that year. The male traveled over 2000 km away to Russia while the female stayed in the greater Alaska region (Pearce & Petersen, 2009). This small data set can help to shed light on first-time molt migrations and coupled with genetic testing may help bring better understanding to population structure dynamics.

Common Mergansers prefer high quality, freshwater and protected saltwater, riparian forest habitats and one study has shown the potential for them to be considered an indicator species for naturalness and biodiversity (Kajtoch, Żmihorski, & Piestrzyńska-Kajtoch, 2014). In this study of the submontane Carpathian river valleys, Goosanders were strongly correlated with natural hydrology (e.g. alluvia and unregulated waterways) and a high species richness of riparian vertebrates (Kajtoch et al. 2014). For the breeding and nesting season, well established forests higher in the watershed provide quality nesting cavities and large downstream waterways to rear young (Pearce et al., 2015).

Field observations in the local Olympia area during February-March 2019 indicate a preference for river mouths, with sightings of breeding pairs at the Nisqually River mouth before the estuary and the Deschutes river mouth upstream from Capitol Lake. 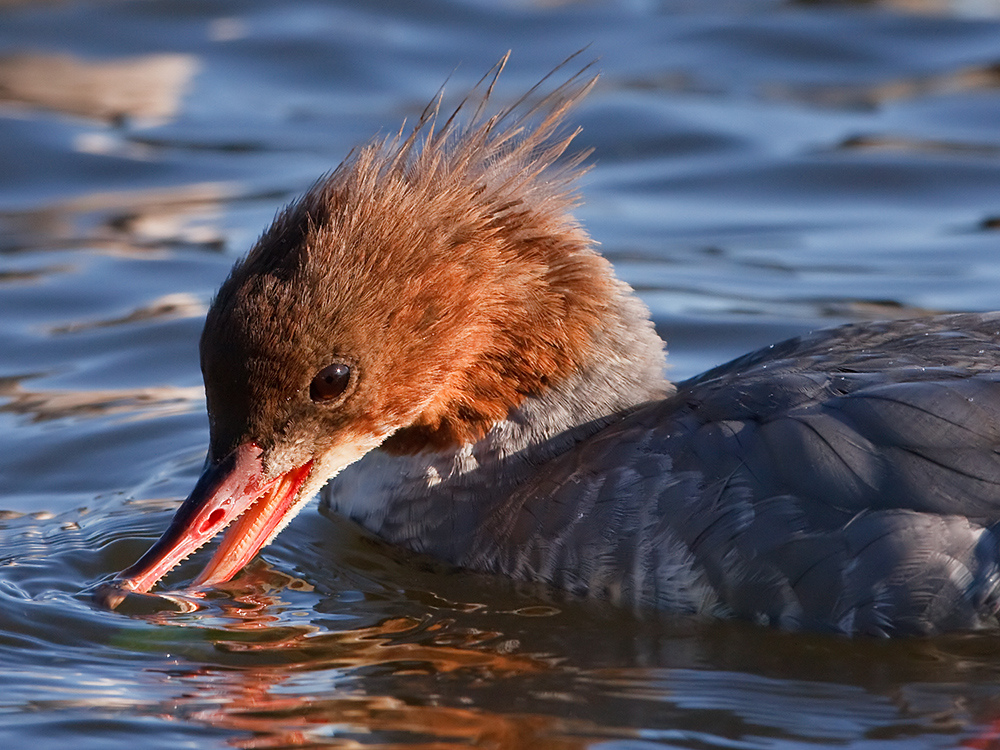 Common Mergansers are specialized piscivorous feeders, with strong diving abilities and teeth-like structures in their bill to grasp fish. 400 g of fish is their daily required intake (Wood, 1984). In a study of feeding methods in south Sweden, Goosanders were observed to be relatively low-intensity day-feeders, catching rather large prey per body size compared to Red-breasted Mergansers (Nillson, 1970). In Washington and Oregon, a report published by the Washington Department of Fish & Wildlife concluded that Common Mergansers have a “strong and consistent” ecologically dependent relationship with salmon (Cederholm et al., 2000). In the Pacific Northwest they are well known to aggregate at favorable fishing locations and times such as where there are large groups of smolts (Cederholm et al., 2000; Wood, 1984). In Central Europe, Goosanders and Cormorants have overlapping feeding niches and it was observed that the two species tended to spatially distribute themselves apart from one another, with the Cormorants possibly being the more dominant predator (Kajtoch et al., 2017).
Sounds

Recording by Francesca Sottile in Lombardia, Italy of an adult female alarm call. The female had 14 chicks with her.

Recording by Lauri Hallikainen in Satakunta, Finland of a female call and male song. 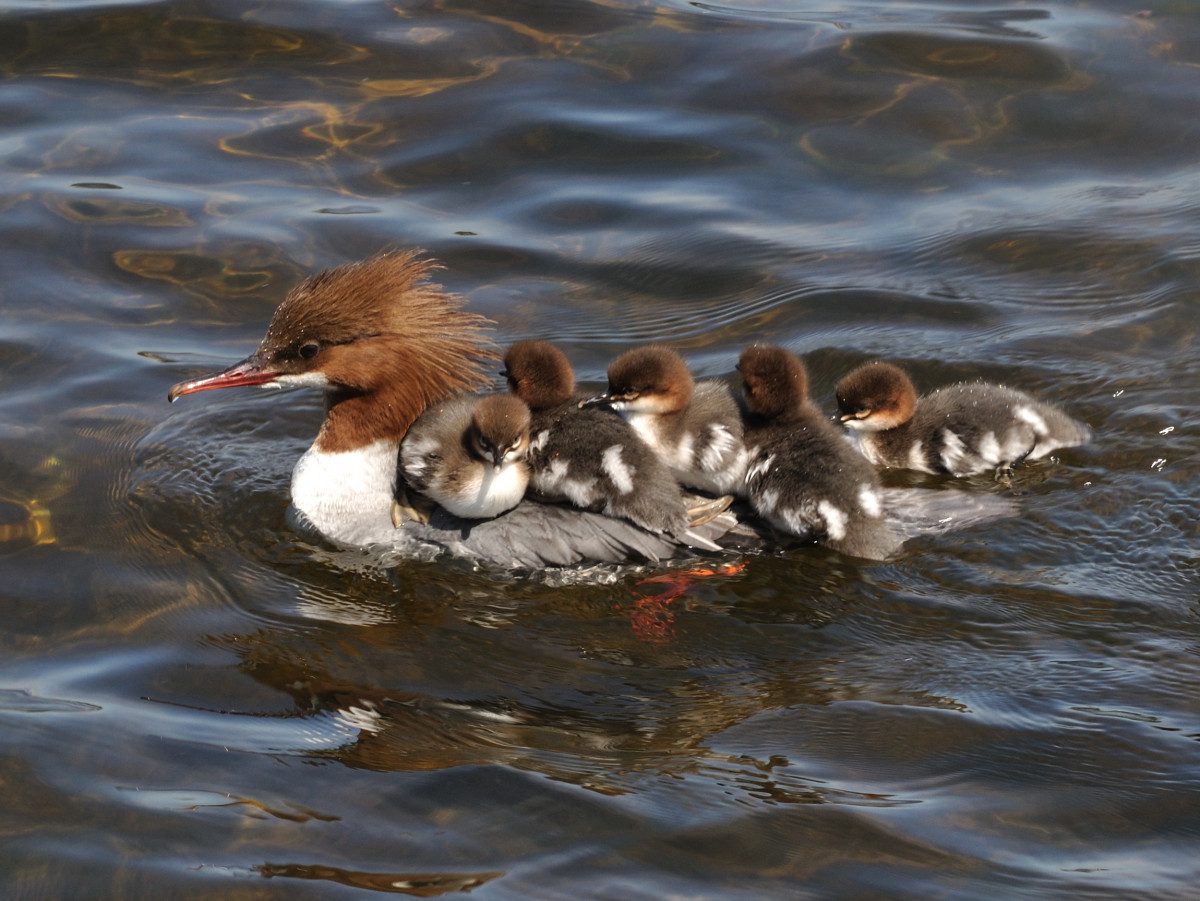 Many aspects of the Common Merganser are actually poorly studied, due to its secluded nesting habitat and low importance as a gamebird. Further research is needed especially surrounding breeding biology, nesting, and fledgling activity (Pierce, et al. 2015).

Avian piscivores are strong bioindicators for the environmental health and contamination of aquatic ecosystems due to their position on the food chain. There are a myriad of anthropogenic contaminants interacting with Common Mergansers. In our local area, Puget Sound and surrounding wetland regions have been identified to be at high risk for mercury contamination and bioaccumulation in avian piscivores (Jackson et al., 2016). Piscivores, such as Common Mergansers, that consume larger fish are generally at a higher risk for bioaccumulation, although there is considerable variation of sensitivity among species (Jackson et al., 2016). Industrial waste from milling industry has also been shown to bioaccumulate PCBS, dioxins and furans in Common Merganser eggs and livers (Champoux, 1996). This may be of special concern as that industry generally overlaps the forested range of the Common Mergansers.

Exposure to fluoride from industrial pollution may be a contributor to local population decline in another study which sampled tissue from the pineal gland, brain and bone from a group of Goosanders in the Odra Delta estuary in Poland. While fluoride was found in all samples of each goosander, there were significantly higher levels in the pineal gland than the brain and bones (Kalinska 2014). Compared to levels measured in mammals, the accumulation in both brain and pineal gland is extremely high, which may have to do with a more permeable blood-brain barrier. In some studies, avian piscivores have been shown to accumulate higher fluoride levels than omnivorous or herbivorous birds perhaps due to higher stomach acid that can dissolve the bones of fish, releasing more available fluoride (Kalinska 2014). Fluoride may also increase availability of other toxins and cause nutrient deficiencies. While there is no definitive conclusion on the interaction between fluoride and avian physiology from this study, it is worth keeping it in mind as a possible player in toxicological issues and further study is warranted (Kalinska 2014).

In a recent global review of anthropogenic litter, Common Mergansers were listed for entanglement in litter and for being most susceptible to micro-litter pressures (Battisti et al., 2019). Extreme cases of zinc toxicosis were reported in captive diving ducks, including Common Mergansers, all found with pennies or other zinc-rich metal in their gizzards (Zdziarski, Mattix, Bush, & Montali, 1994).

Despite the threats discussed above, populations seem to be stable or even on the rise around the world (Pearce et al., 2015; Marchowski et al., 2017). An analysis of 20 years of the Olympia, WA area Audoban Christmas Bird Count backs up this finding, showing great variation year to year, but overall a gradual increase in the local population. 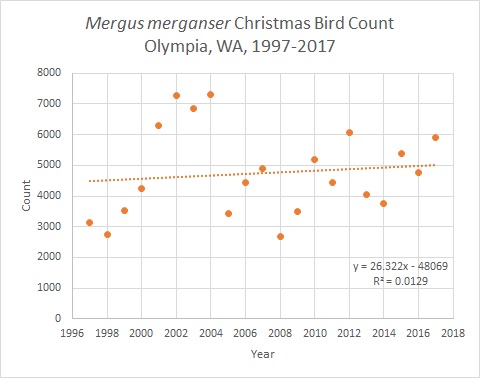 Wood, C. (1984). Foraging behavior of Common Mergansers (Mergus merganser) and their dispersion in relation to the availability of juvenile Pacific salmon (Doctoral thesis, The University of British Columbia). DOI: 10.14288/1.0096565

Kim Smith is a senior at The Evergreen State College studying Environmental Science.