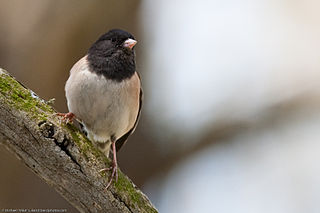 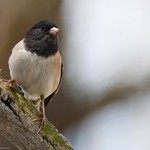 The Dark-eyed Junco is a medium sized, common sparrow of North America. Its sub-species (whose numbers are disputed) are distinguished by variations in plumage, although they all have similar habits (Nolan et al. 2002).

This page will detail the Oregon subspecies, which can be identified by its distinct black head, rufous flanks, chestnut back, and white to beige belly and breast. It also has white outer tail feathers that flash when in flight, a tan beak, and pink legs and feet. The Dark-eyed Junco is weakly sexually dimorphic. Males are slightly darker than females (Dunn 2002). Immature Juncos are somewhat browner and occasionally have streaked breasts. (Carroll 2004).

Distribution
The Dark-eyed Junco is found in North America throughout most of Canada and the United States, and into northern Mexico. The junco’s summer breeding populations are densest on the west coast, from Central California up into British Columbia, but there are some less dense populations along the Appalachian range on the east coast as well (Breeding Bird Survey 2012).

The subspecies found at the Evergreen State college, the Oregon Dark-eyed Junco, is found in most of British Columbia, Canada, south to northern Mexico, and east over to Texas. It is seen sporadically throughout the eastern United States (Sibley 2003).
Habitat
Dark-eyed Juncos tolerate a wide range of habitats. They are fairly common in open woodlands, brushy areas, towns, gardens, and grassland. Experimental studies show that juncos adapt well to changes in their environment, such as prescribed or natural burning (Sperry et al. 1999). Their flexibility in habitat has contributed to a somewhat varied morphology. In studies, high elevation resident females had longer wings than their low elevation conspecifics, and high elevation resident males had longer tails than their low elevation conspecifics (Bears et al. 2008).

At The Evergreen State College, Juncos are commonly found throughout brushy areas adjacent to buildings. They can be easily observed gleaning seeds below the bird feeders on the north-east side of the library building, and below the bird feeders on the south-west side of the Seminar I building. They are also common throughout The Evergreen Woods and along sidewalks, roadsides, and in the parking lots (Smith pers. obs.).

Food Habits
Juncos forage on open ground or near it (Sperry et al. 1999). They can be commonly seen “riding” a grass stem – a behavior in which they fly to the top of a seed cluster on a grass stem, and weigh it down, so they can pick the seeds off at their leisure (Sibley 2001). Their diet is typically comprised of one half insects and arthropods, and one half seeds. Their diets tend towards insects during breeding season, and seeds during the winter (Judd 1901). They commonly eat the seeds of chickweed, buckwheat, lambs-quarters, and sorrel. Their insect food is comprised of beetles, moths, butterflies, caterpillars, ants, wasps, and flies. Young generally eat a higher concentration of insects and arthropods (Nolan et al. 2002).
Sounds
Males have an average of 4.2 songs each, and share at least one song with about 40% of their neighbors. Song sharing decreases rapidly with distance, so song diversity is high (Newman et al 2007). Dark-eyed juncos sing longer songs when neighboring males are singing (Cardoso et al. 2009). Populations may adjust their songs based on environment. Urban birds may shorten their songs to avoid echoes bouncing off buildings (Newman et al. 2006).

Some of the most frequent calls are the following:

Kew –  which is usually repeated several times and can be heard throughout the year. It is usually heard during disputes and causes birds to move apart.
KewRecorded by Saff Smith, November 10th, 2012, in Olympia, WA

Twitter – a string of high notes, usually 6-19 syllables in length. It is produced by females pre-copulation, and by both sexes during aggressive displays. This sound tends to be heard more frequently in larger sized flocks (Smith pers. obs.).

Tsip – a high frequency note, usually called 1-4 times in flight, and during flocking. On The Evergreen State College campus during non-breeding season this was the most often observed vocalization (Smith pers. obs.)
TsipRecorded by Saff Smith, November 10th, 2012, in Olympia, WA
(Sound descriptions after Balph 1977).

Behavior
Dark-eyed Juncos are a territorial, socially monogamous species (Whittaker et al. 2009), that breed after their first year (Sibley 2001). Although technically monogamous, juncos engage in extra pair fertilization. Based on data from two junco populations, it has been shown that approximately one third of young are sired by an extra-pair male. This shows that males not only compete for a mate, but extra-pair opportunities as well (Ferree 2007). In one study of a population of Dark-eyed Juncos, it was found that climatically milder environments reduce territorial aggression in males, which is correlated to increased number of eggs and offspring raised (Newman et al. 2006).

Males do not build nests or incubate their eggs (Whittaker et al. 2009). Clutch size is usually four eggs, with clutches of three or five common as well (Nolan et al. 2002). Dark-eyed Juncos are subject to brood parasitism by Brown-headed Cowbirds. About 50 percent of the time, the cowbird will remove Junco eggs from the nest (Whittaker et al. 2009). Young are born altricial (Sibley 2001), and remain in the nest for 11 to 12 days before fledging. Males and females tend to provide for their young equally during the nestling period (Reichard and Ketterson 2012).

In recent studies, there is evidence to show that females use competitive traits to gain more access to resources which also has a positive affect on reproductive success. Aggression in females has positive and negative affects on the hatch lings. It was observed that aggressive females brooded less, but they fed the hatch lings more often. The aggression of the female does not have a direct affect on the mass of the egg (Cain et al. 2013).

Dark-eyed Juncos winter in small flocks in patchy wooded areas, and may forage with other sparrows and bluebirds. They have distinct social hierarchy that is based on several factors. Dominance is established by individuals that arrive earlier to winter flocks, and is also related to size. The dominance based on size may also be related to increased amount of white outer tail feathers. Females pick mates based on increased amounts of white tail feathers, thus allowing bigger birds to dominate sexually as well (Ferree 2007). Increased white plumage on the tail is related to increased age. Thus females show preference for older males. When females have been manipulated to have more tail white, males show neither preference or revulsion (Wolf et al. 2003). Juncos flash their white outer tail feathers to serve as an alert signal to their winter flock.

Dark-eyed Juncos undergo a full molt from the end of their breeding season to December (Bears et al. 2008).

Dark-eyed Juncos are mostly migratory, and follow food south, but will winter over if there is enough food. In studies, it was found that migratory Dark-eyed Juncos had better spacial memory than non-migratory Junco species, probably due to their more densely packed hippocampal neurons (Cristol et al. 2001). Males typically winter farther north than females, likely to be closer to the breeding grounds when females return to breed (Sibley 2001). Some Washington state birds are resident, but most migrate north to south or high in elevation to low in elevation. Non-migratory Juncos may have shorter wings than migratory birds. Their flight is very agile because they navigate tangled under-story. In flight, they flap continuously and pump their tails.

The International Union for Conservation of Nature (IUCN) has listed the Dark-eyed Junco under the category of ‘Least Concern’ (BirdLife International 2012).

The Dark-eyed Juncos’ total population is estimated to be around 630 million (Nolan et al. 2002). 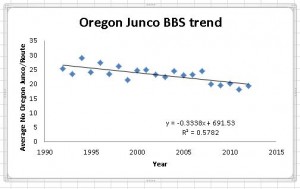 The BBS trend line shows a negative population trend for the years 1992 to 2012. Based on a regression analysis there a low probability that there is no trend in the past twenty years according to the BBS trend data. 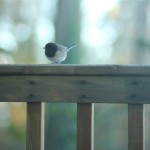 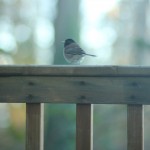 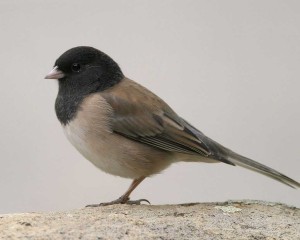 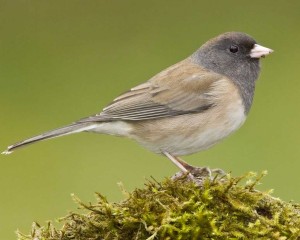 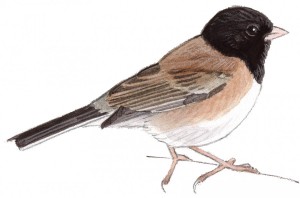 An illustration of a Dark-eyed Junco
http://www.johnmuirlaws.com/store/attachment/junco-dark-eyed-or-m-dark

– 11/11/14 ~ 12:30pm
Weather: No cloud cover; No precipitation; Medium winds; 51°F
Same location as the day before. Watched one individual make multiple songs and calls, but said individual did not move much throughout his environment. He was standing on the ground and remained there for a period of 6-7 minutes.

– 11/14/14 ~ 1:45pm
Weather: Light cloud cover; No precipitation; Light winds; 53°F
Two males perched in the same tree on the N side of the library building on The Evergreen State College campus. These two individuals were perched the highest I had seen since I began my observations. One bird was perched roughly nine feet above ground and the other was perched roughly seven feet above the ground. They showed some mild examples of territorial behavior.

– 11/20/14 ~ 10:30am
Weather: Medium cloud cover; Little to no precipitation; Light winds; 49°F
At Nisqually National Wildlife Refuge, observed five individuals (four males and one female) forage for food along a small frozen stream. The female did not go onto the frozen substrate as much as the four other males did, but she remained close by. The birds seemed to be eating the thin layer of algae that rested on top of the frozen water’s surface. Most individuals would walk along the substrate and pick at the algae, then lift their heads up and do it again. An Anna’s Hummingbird (Calypte anna) flew over to a nearby tree branch during this time and the juncos became very vocal. The Dark-eyed Juncos seemed to be expressing some territorial behaviors although when the Anna’s Hummingbird came over, one of the male juncos quickly flew into a low bush beside the frozen body of water.

– 11/20/14 ~ 12:00pm
Weather: Medium cloud cover; No precipitation; Light winds; 51°F
Later in the day at Nisqually National Wildlife Refuge, I came across two individuals perched in a tree next to the walkway. They were perched at different heights within the same tree and constantly moved throughout it. I then noticed a third individual perched on the wooden walkway itself ahead of me about 15 feet. It stood there for a while and then flew out of my range of sight.

Ramenofsky, M., Savard, R., and  Greenwood, M.R.C. 1999. Seasonal and diel transitions in physiology and behavior in the migratory dark-eyed junco. Comparative Biochemistry and Physiology Part A 122 385 – 397.