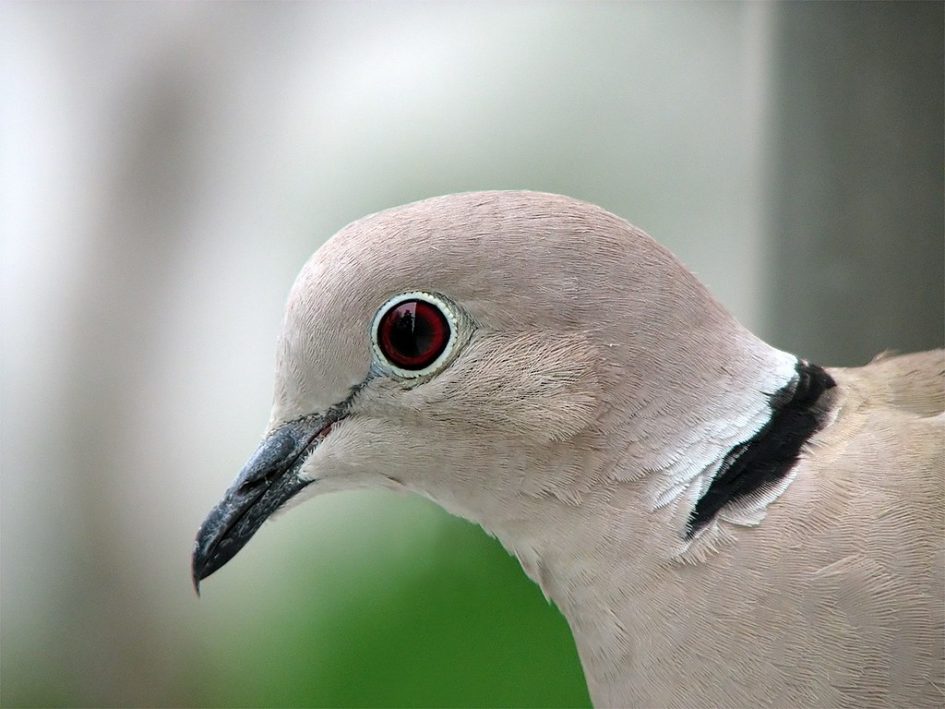 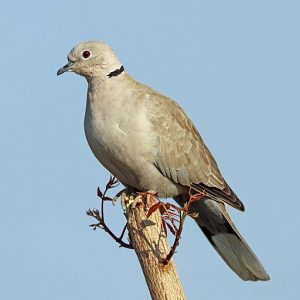 Introduction:
The Eurasian Collared-Dove is an introduced species from Eurasia. During the mid-1970s, a pet store in the Bahamas had multiple individuals escape, then decided to release their remaining 50 doves (Henceveld, 1993). By the 1980s, the first individuals were found in North America in Florida (Henceveld, 1993). Since this time the bird has spread across the lower 48 states and made its way to Washington State (Henceveld, 1993). Since this time the bird has become a fairly common, year-round resident (Ebird). They are often found alongside and are mistaken for, the native Mourning Dove. Concerns have arisen regarding the Eurasian-Collared Dove and the impacts they may have on native species in Washington, specifically the previously mentioned Mourning Dove. 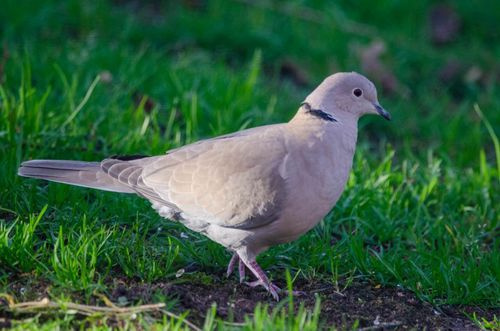 The Eurasian Collared-Dove is about 12 inches in length and has a wingspan of about 21 inches (Shewey, Blount, & Herlyn, 2017). The dove is similar in plumage between the sexes. The males do not molt their common plumage for breeding plumage but remain the same throughout the year (Shewey, Blount, & Herlyn, 2017). The dove is overall a pink/buff color, with darker remiges and rectrices. The ventral side of the rectrices is a dark grey from the base to the middle of the feathers. Their most defining feature is their black, crescent-shaped collar on the nape of their neck. Some birds have a very defined white eye-ring, in others, it is less noticeable. This species is often confused with the very similar Mourning Dove. The most noticeable difference between the two is the black “collar” of the Eurasian Collared-Dove, along with them being slightly larger, paler in color, and a squared off tail.

The Eurasian Collared-Dove is thought to be native to India, Sri Lanka, and Myanmar before expanding its range into Turkey and the Balkans in the 1600s (Romagosa, Mceneaney, 1999). It is unknown how this range expansion occurred, but is possibly from human introduction or natural movement (Romagosa, Mceneaney, 1999). From here the dove’s range expanded across Europe, arriving in Yugoslavia in 1912, Germany in 1949, and Great Britain by 1955 (Romagosa, 1999, Lachmund, 2015). Due to the dove’s popularity with breeders, a store in the Bahamas carried them. In 1974 during a robbery of this store a few individuals escaped, and not long after the owner released the remaining 50 Collared-Doves (Henceveld, 1993). A separate population was released in Guadeloupe in the mid-1970s due to an impending volcanic eruption (Romagosa, 2012). From here the species made its way to Florida, with the first sighting occurring in the early 1980s, and then across much of the North American continent (Romagosa, 2012). 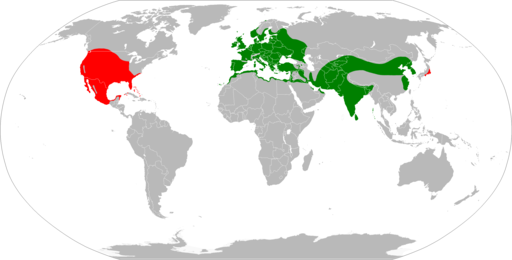 Based on species maps from eBird.org I found that in the United States, the species’ relative abundance is highest in areas with a lot of open and dry farmland, such as Texas, Oklahoma, Nevada, and eastern Oregon and Washington. The dove avoids more mountainous areas and is rare to not present in the northeastern United States. In Western Washington, the bird can be found from the Canadian border down to the Columbia River, avoiding much of the Olympic Peninsula and the Cascade Range. In Washington State as a whole, the dove makes up about 2% of the seasonal North American bird population and has a mean relative abundance of 1.52 (Ebird).

Trends in relative abundance for this species in Washington show a fairly high increase from 2007 to 2016 in the southeast, southwest, and northwest areas of the state during the breeding and non-breeding season (Ebird).

In North America, the Eurasian Collared-Dove prefers more open environments such as farmland and suburban areas where grain availability from agriculture and backyard bird feeders tends to be high and roosting and nesting sites are available (Veech, Small, & Baccus, 2011). In general, the bird uses southern magnolias and live oak for nesting and roosting, but have been observed roosting in buildings, including barns (Romagaso, 2012). In Washington State, these birds will use native trees such as Big-leaf Maples for nesting, and telephone poles and wires for roosting. These birds tend to avoid highly populated areas and agricultural land that is heavily used, along with heavily forested sites (Romagaso, 2012).

Overall it has been found that this bird is not generally present in areas unaltered by humans (Fujisaki, Pearlstine, & Mazzotti, 2010), and one recent study out of Mexico found that habitat with the Eurasian Collared-Dove had an overall less diverse dove community than areas where they were not present (Camacho-Cervantes & Schondube , 2018 ). 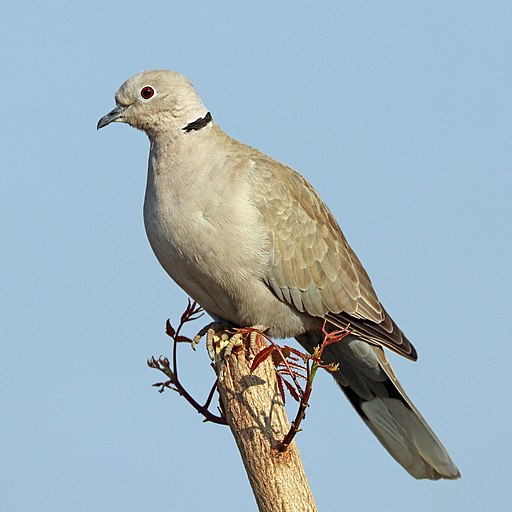 In Washington State, most of the population favors cropland, with urban and built-up areas coming in second as favored locations (Ebird). They avoid forested areas, especially evergreen needleleaf forests, and areas over open water (Ebird). In Thurston County, individuals are often seen in parks, housing complexes, and farmland (Audubon).

The Eurasian Collared-Doves’ combination of a long and slender bill and pecking behavior allows them to effectively and quickly take up seeds without the need to husk seeds. The dove generally forages on the ground under bird feeders and in areas where grain is stored and fed to animals (Romagaso, 2012). They will also feed on elevated bird feeders if they are sturdy enough to take their weight. The mean pecking speed for this species is recorded at 21.6 pecks/15 seconds (Romagaso, 2012). Foraging in areas such as parking lots allows the birds to obtain the grit they need for their grinding up the seeds which they swallow whole (Romagaso, 2012).  Hovering over bushes via quick wing beats is how they are able to obtain berries (Romagso, 2012).

Eurasian Collared-Doves feed primarily on grain found in agricultural areas or from food in backyard bird feeders. Cereals and seeds like sunflower, millet, milo, and wheat make up their diets but have been known to eat peanuts, crushed pecans, crackers, and bread (Romagso, 2012). Individuals in this species have also been observed eating gravel and berries from a Dahoon Holly (Romagso, 2012). In Europe, they are known to eat rye, barley, mustard seed, knotgrass, elderberries, and on occasion invertebrates such as flies and their larvae and termites (Romagso, 2012). 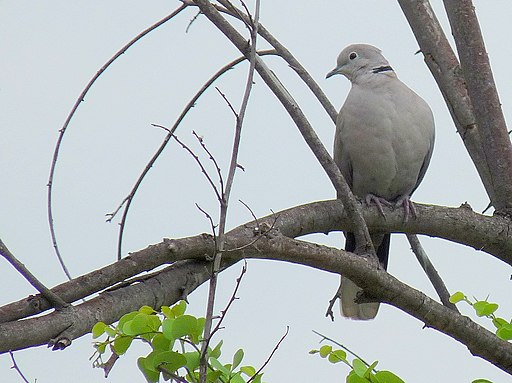 Grain preference was determined in a cafeteria-style presentation of food to Eurasian Collared-Doves and found that milo was the first choice for the birds, with millet, maize, sunflower, and wheat as their second through last pecks, respectively (Poling & Hayslette, 2006).

The song of the Eurasian Collared-Dove consists of a series of coos in rapid succession, generally two short coos followed by a drawn-out coo. The call is a slow reeeh reeeh noise.

The song and calls from the Eurasian Collared-Dove can be heard in this audio clip.

This audio is of the dove’s call during flight.

The Eurasian Collared-Dove is a year-round resident of Washington state and North America (Romagso, 2012) A large part of their food source comes from bird feeders, allowing them to stay remain residents even in areas with a colder climate (Romagso, 2012). The males pick the nesting site and bring material to the female, who builds the structure. Nest usurpation by the Eurasian Collared-Dove of an American Robin nest has been observed (Kasner & Pyeatt, 2016). The nest was occupied by the Robin, then briefly shared by the dove, before the dove became aggressive and took over the nest (Kasner & Pyeatt, 2016).

During the breeding season, male collared-doves fly at steep angles from a perch and makes loud wingbeats to attract potential mates (Usherwood, 2008). This display is very energy efficient, as only a 5% increase in basal metabolic rate is required for an hour of climbing and diving (Usherwood, 2008). 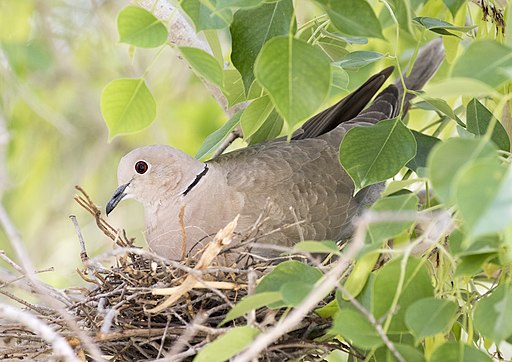 Females generally lay two eggs per clutch, with the first hatchling generally being larger in size than the others (Eraud, Jacquet, & Legagneux, 2011). They are incubated for 14-18, and after hatching, both parents remain until the babies leave the nest 115-20 days after hatching (Audubon). Before the young leave the nest, they are fed a substance called “pigeon milk”, which is a nutrient-dense liquid that functions in a similar way as milk produced by mammals (Yao Ma, et.al., 2018)

Population Trends and Conservation Issues
The population of Eurasian Collared-Doves is on the rise in North America, and in Washington State (Audubon). As addressed previously the relative abundance of the bird, while not extremely high in this state, is on the rise. This graph displays the Christmas bird count data over the past ten years in Olympia, WA for the Eurasian Collared-Dove. This shows an overall increase in individual sightings since 2008, from 17 in 2008 to 2018 in 110. It should be noted that data for the year 2009 was not available. 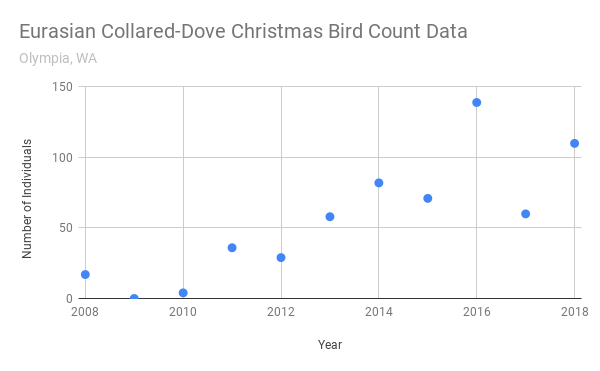 As this species is a non-native, concerns about conservation are focused on their potential impacts on native bird species in North America. More research is required in this area, but it currently does not appear that this species has a negative impact on native species, specifically the similar Mourning Dove based on findings from a 2006 study of their foraging behavior. This study found that both bird species picked corn seeds that were more narrow and short than the average corn seed. This is the only similarity between the two species’ seed-size preferences however as the Eurasian Collared-Dove consumes sunflower seeds that are more broad and thick than average and corn that is more thick than average. According to the paper “Eurasian Collared-Doves may select thicker and/or broader-than-average seeds to maximize foraging efficiency.” By contrast, the Mourning Dove selects sunflower seeds and corn that are average in size, which most likely limits foraging competition between the two species (Hayslette, 2016).

Camacho-Cervantes, M., & Schondube, J. (2018). Habitat use by the invasive exotic Eurasian Collared-Dove (Streptopelia decaocto) and native dove species in the Chamela-Cuixmala region of West Mexico. The Wilson Journal of Ornithology, 130(4), 902-907.