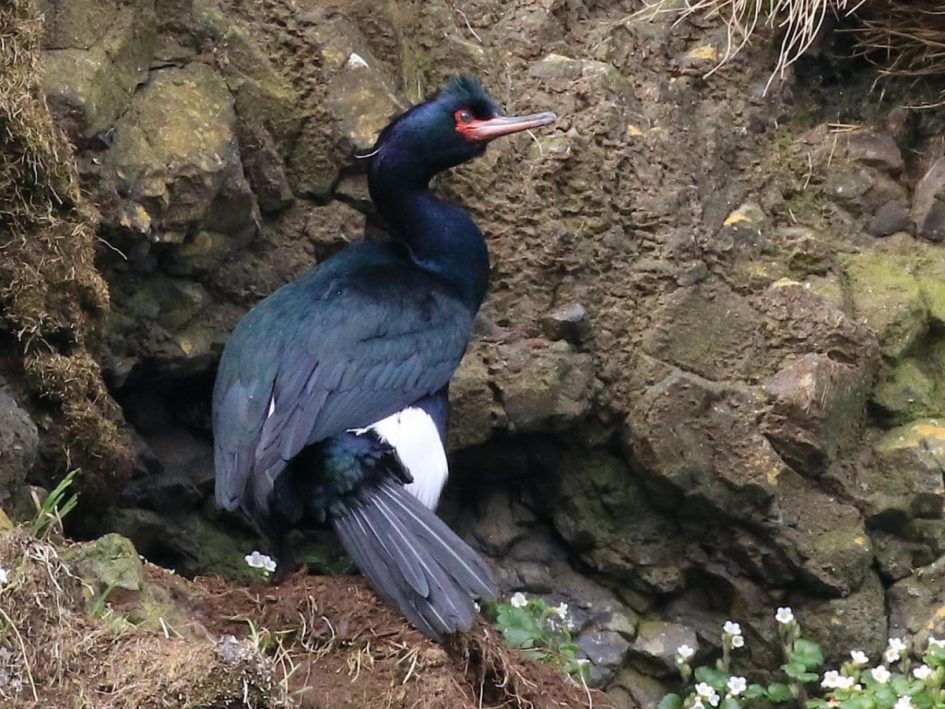 Pelagic Cormorant (Phalacrocorax pelagicus) is a large water bird but the smallest of the other species of cormorants.  This species has a slender neck and body with a thin bill.  Pelagic Cormorants have all black bodies when they are young but as they mature, their bodies show a iridescent green color, as well as iridescent purple on their necks.  They have white patches under their wings which can help with identification as they fly.

Pelagic cormorants will be seen nesting on rocky shores by the ocean, or sound.  The build their nests in areas that are very difficult or impossible for predators to get to.  They also tend to prefer to be isolated from all other animals, including their own species, but occasion will be seen nesting together.

Pelagic cormorants hunt under water in the ocean or sound for fish as well as some crustaceans.  Most their hunting occurs near the shore rocks.

The range of the Pelagic cormorant extends along the western coast of North America from Alaska to the Baja peninsula.  They have also been spotted in South Korea, Japan, and along the eastern coast of Russia.  During the summer months they are the farthest north in these areas and then migrate to the southern parts of their region in the winter.  They can also be found year round in most of the middle area between southern Alaska and northern Baja peninsula. 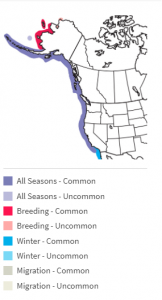 Pelagic cormorant habitat consists of mostly coastal cliffs and steep inaccessible areas where predators can not get to them. They nest near shoreline areas from the ocean to small lagoons.  The habitats they prefer is close to the shore for hunting but can sometimes be found farther inland in some areas.

Pelagic cormorant diet mostly consists of small fish, crustaceans, and invertebrates that the find on the ocean floor.  They hunt by diving under the surface to locate prey.  When they dive they mostly propel themselves with their feet but occasionally use their wings as well.  They are known to dive as deep as 120 feet to feed on the ocean floor.  They are also known to be found hunting in mixed species groups because they are attracted by other feeding birds.

They are only able to hunt in the water for short amounts of time because their plumage is not waterproof like most other birds.  Pelagic cormorants have to return to shore and preen their feathers as well as hold their wings out away from their bodies until they dry out.

The oldest recorded Pelagic cormorant was 17 years and 10 months old and it was found in British Columbia.  Both males and females can reach sexual maturity in two years.

They like to live and hunt generally far away from other birds but sometimes will form small colonies of the same species.  When they hunt they grab the fish in their bills versus spearing it like many other birds do.  They catch most their prey underwater.

Pelagic cormorants form nests from stringy plants such as grasses and seaweeds and hold it all together with their guano.  When pairs mate they generally mate for life and stay the same mating pair each year.  Both male and female will incubate the young.  Often they will find an area they like best for nesting and will return to the same nest each year and just repair it.  Since they just keep repairing the same nest each year, they are known to reach up to 5 feet tall.  Their clutches are generally two to five eggs but the highest recorded was 7 eggs.  Incubation lasts three weeks to one month.  When they young hatch, they have no feathers but quickly grow short grey down.  Most pairs raise two pairs at most each season.  They nest in hard to reach places and tend to have better luck excluding predators by being hard to get to instead of actually trying to defend themselves.

Male courtship displays include stretching of their neck, yawning, hopping, and lifting their wings to show their white rump patches that only males have. When “yawning” the males make calls that are slightly different from female calls but most of the time the display is done in silence.

Young may be able to star flying at 35-40 days.  After 45-55 days they will start leaving the nest but will still befed for a few weeks by both the parents.

Cormorants have been killed off by fishers who think that the birds are effecting commercial fisheries because of what they hunt.  In reality, cormorants hunt different types of fish.  Cormorant populations have also decreased from oil spills and contamination of prey.

In the 1980s, North American populations were recorded at over 120,000, with Alaska containing close to three-quarters of those.  The current population is estimated as 69,000 breeding birds, by North American Waterbird Conservation Plan.