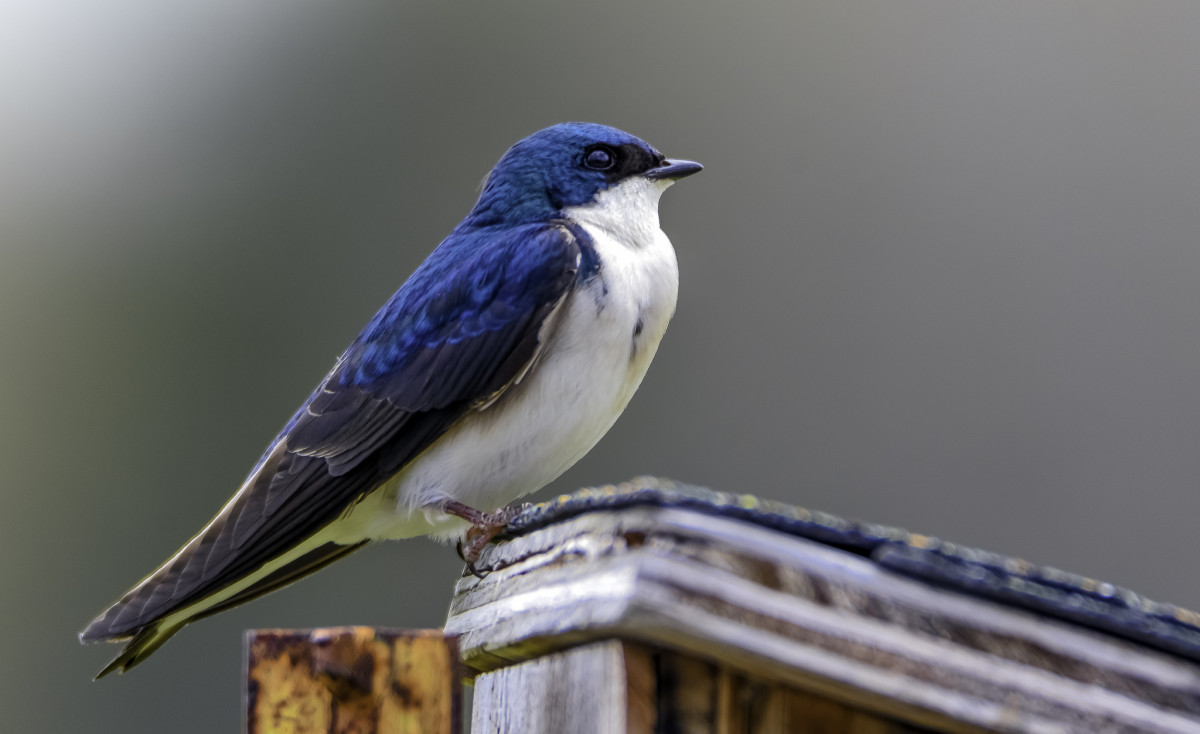 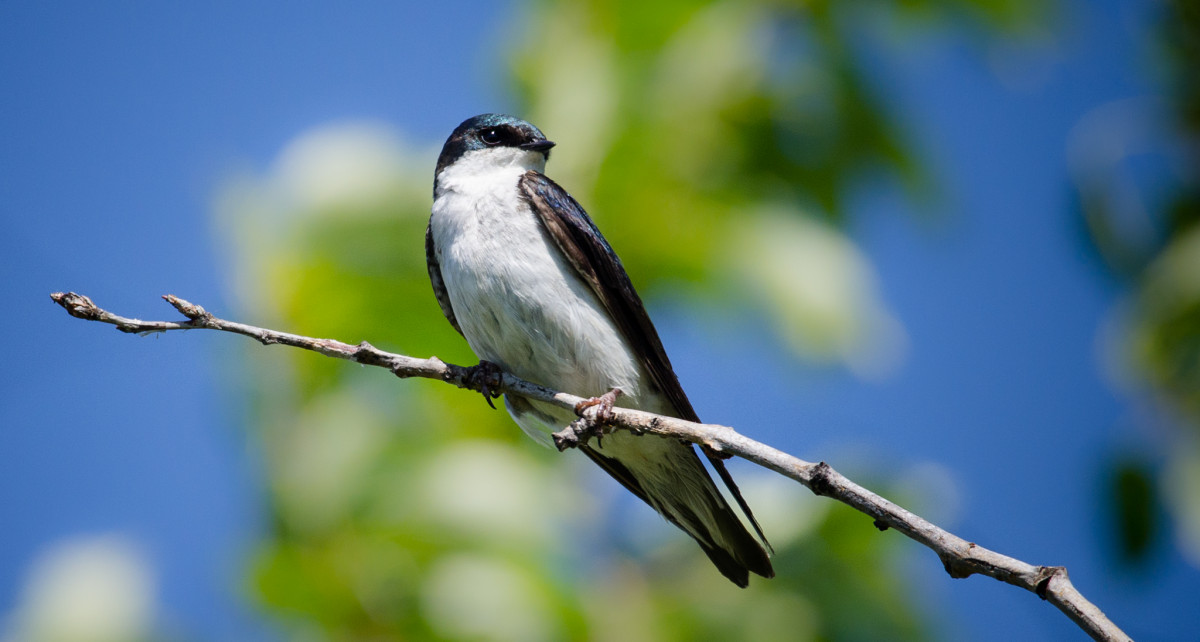 The Tree Swallow (Tachycineta bicolor) is a tiny, streamlined songbird well known for catching flying insects in midair with their tiny, flat bill. They are recognized by their long, broad wings, a short, slightly notched or squared tail for making sharp turns when hunting. Both sexes reach a length of 12-15 cm, a wingspan of 30-35 cm (“using apa”, 2017), and a mass of ~20 g (Betini and Norris 2011). Males are recognized by their iridescent bluish-green plumage above, blackish flight feathers, a black lore, and white underparts, while females are duller with more brown in the upperparts with hints of blue-green.

The tree swallow is found throughout North America, but visits or stays in certain areas across the continent In the winter, tree swallows stay in areas like Mexico, the Southern USA and most of Central America, but can also make migratory stops along their migration routes in the Great Plains, eastern Oregon, and the southwestern and southeastern US.

Habitat
Tree Swallows are found in a variety of open habitats depending on the time of year or behavior. For example, they breed in open areas adjacent to water, such as wetlands and fields, whereas flocks of foraging individuals are also frequently seen over wetlands, water and agricultural fields (“using apa”, 2017). When nesting, they can be seen in artificial nest boxes or tree cavities, although they usually face interspecific competition from larger birds like Mountain Bluebirds for occupation of the boxes and amount of resources (Wiebe 2016).
Food Habits
These tiny songbirds are insectivores that feed exclusively on aerial insects and emerging aquatic insects ranging from dragonflies and moths to spiders and bees. A study has shown that in riparian areas, Midges (Chironomidae) were consumed more by adults in the category of emerging aquatic insects than Ephemeroptera (Beck, Hopkins and Jackson, 2013). When the temperature is suitable enough for foraging, the swallows will swoop through the air and use their small bill to catch them in mid-flight (Winker, Luo and Rakhimberdiev, 2013). If there’s poor weather conditions, the swallows either conserve their energy or spend more time foraging in order to survive until the temperature and weather improve (Norris and Betini, 2011).  When that’s the case, tree swallows will eat plant food and calcium-rich food like fish bones, especially during the breeding season.
Sounds
Tree swallow songs and calls can be recognized by three high-pitched and liquid sounds: a chirp, whine and gurgle mixed in many varieties. The calls can also come in the form of aggressive chattering, harsh distress calls and shrieking alarms, and amorous ticking sounds. Both males and females vocalize; this clip below shows a male calling.

The clip was accessed from https://www.all-birds.com/Sound and recorded by unknown.

Behavior
Tree Swallows are highly social as during the wintering season, they will form large migratory roosts and pairs are close together when nesting. The adults protect a territory of resources around their nest aggressively, especially during the breeding season by either snapping their bills loudly or divebombing at anyone or anything too close (Norris and Betini, 2011). According to a 2011 study on tree swallow behavior, males with low aggression had better reproduction success and display it more during certain environmental conditions like warm temperature, but the females didn’t display much of a result (Norris and Betini, 2011). Nest predators range from raccoons and feral cats to American Kestrels and weasels, while adults are hunted by Sharp-shinned Hawks and Peregrine Falcons.
Population Trends and Conservation Issues

Currently, Tree Swallows face threats of decline by anthropogenic noise impact, reduction of aerial insect abundance, and spread of pesticides and other chemical particles into their body through food consumption.

In a study conducted by Cornell University and UC Davis, the adults guarding a nest exposed to noise for a short time experienced an decrease in vigilance during the early nesting period as well as smaller nests (Injaian, Taff, and Patricelli, 2017). Therefore, even when fed after an increase of foraging time by the adults, the nestlings were smaller than usual and took longer to fledge (Injaian, Taff, and Patricelli, 2017). This graph below shows that compared to the control nestlings (not exposed to noise), those exposed to anthropogenic noise had shorter body parts than the control. Out of these graphs, the nestling mass, tail length and wing chord length had the larger gaps in difference than skull and tarsus length. 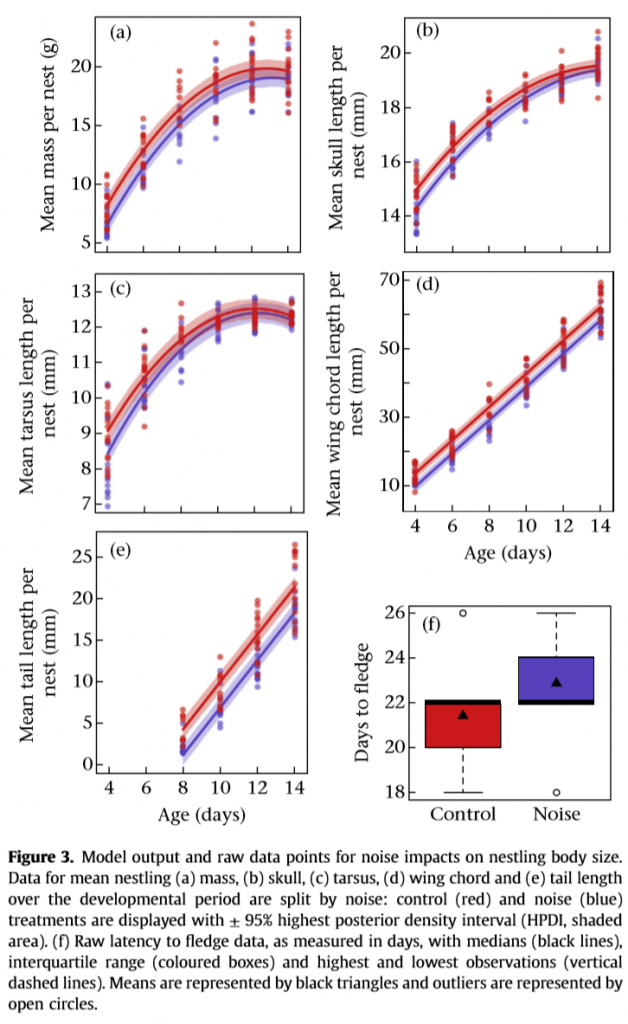 Data showing how noise affects the size of nestlings in terms of length compared to control (A.S. Injaian et. al. 2017)

Noise at higher and moderate levels can also alter the interactions between parents and their offspring by reducing the parental response to begging calls and forcing the adults to spend more time foraging instead of returning when the chicks need them (Leonard, Horn, Oswald & McIntyre, 2015). Thus, extra begging from chicks due to these noise levels could be physiologically costly if adjustments are ineffective.

The trend of the Tree Swallow population in the Northeastern part of North America is possibly experiencing some decline according to data taken by the North American Breeding Bird Survey (BBS) by 49% (1966-2014) due to the acidic NE soil that lacks calcium that insects and birds need (Shutler et al 2012). Overall, though, they are currently considered “least concern” and not in danger of extinction.

A survey analysis conducted for migratory birds in Dutchess County, NY (1885-2008) showed that Tree Swallows were significantly arriving earlier in spring than usual due to climate change, but it doesn’t affect their current population trend (Vitale and Schlesinger, 2011). 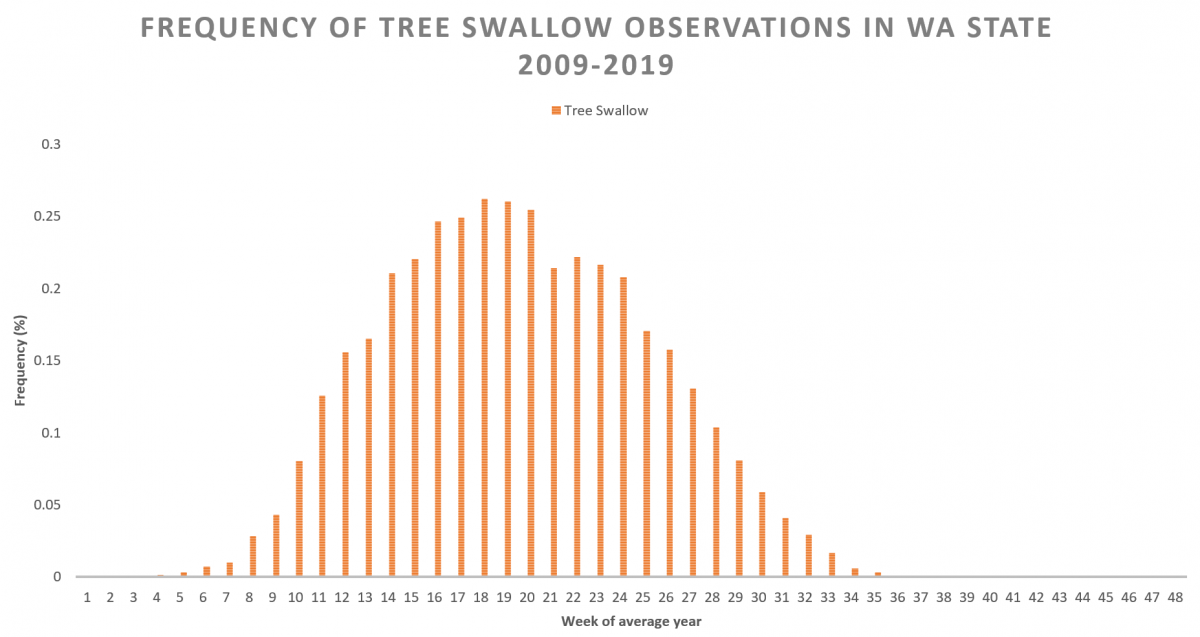 This histogram of the frequency in WA state observations from the last decade shows that Tree Swallows are seen less frequently during the non-breeding seasons and peaked in average frequency in the months of April and May.

About the Author
The author, Brianna G, is a senior and soon-to-be graduate at the Evergreen State College. She has a great sense of curiosity and passion for the environment.
Literature Cited