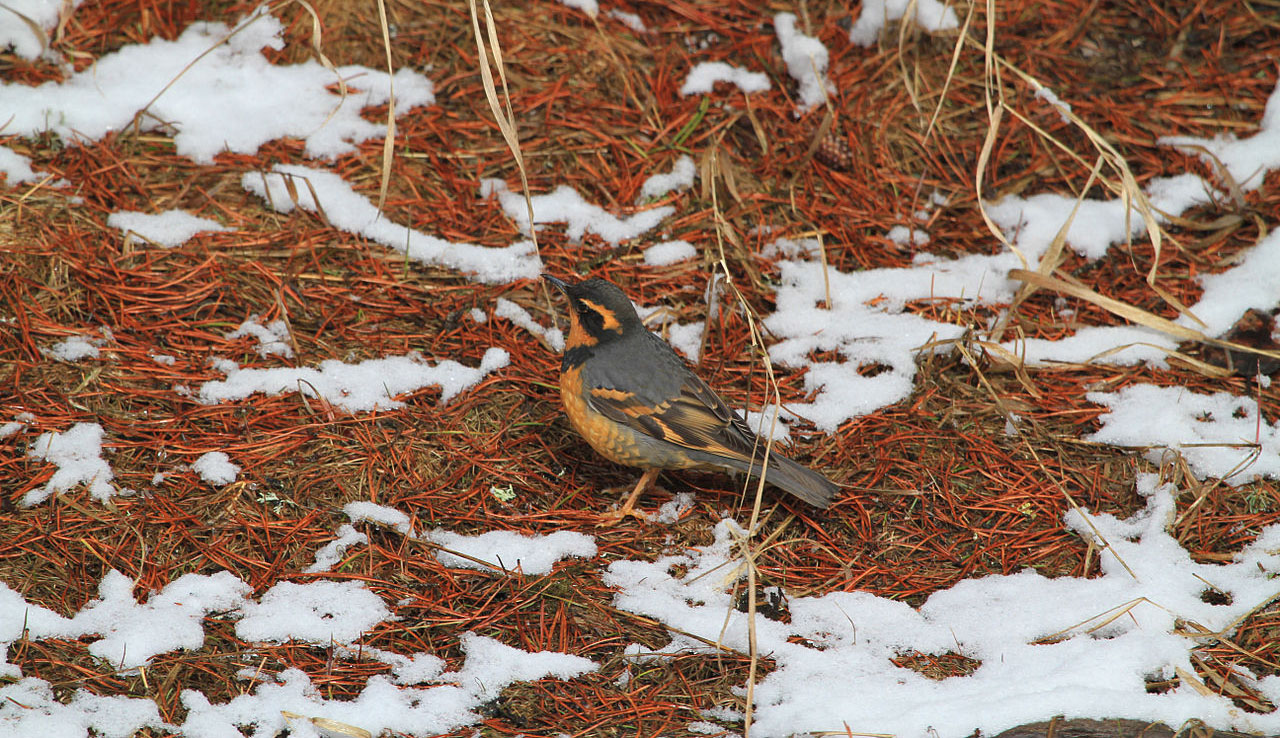 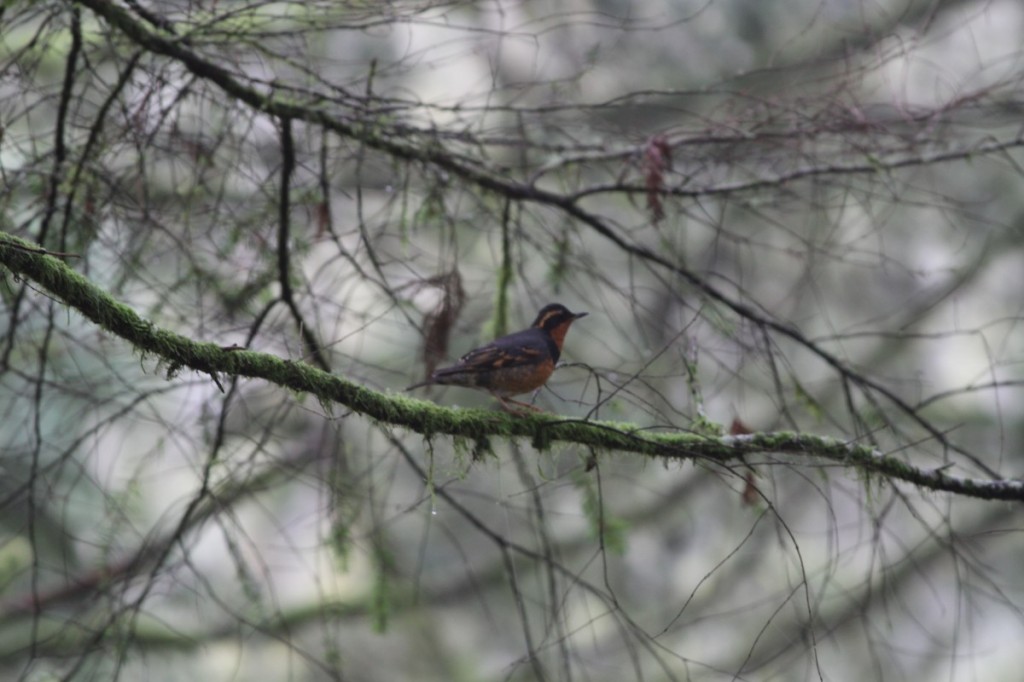 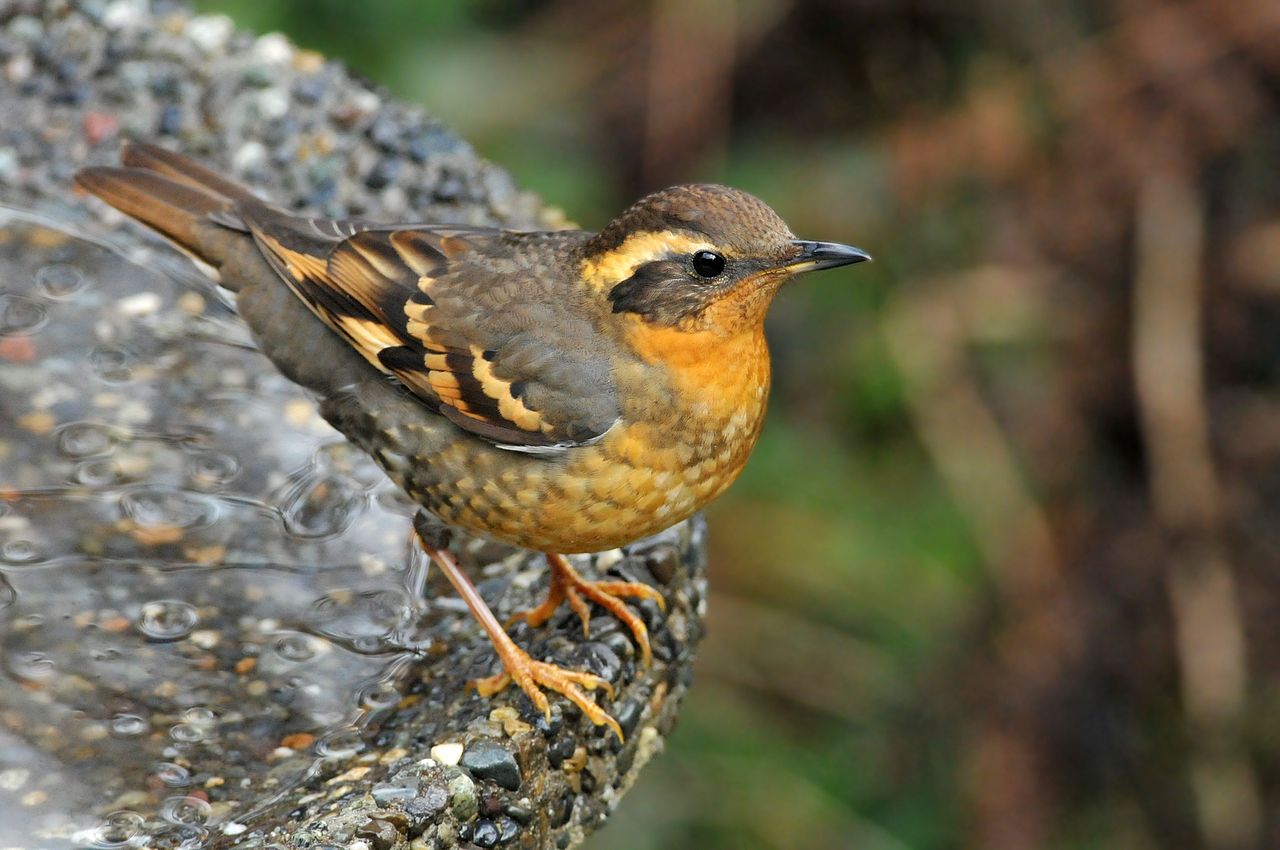 By Minette Layne from Seattle, Washington (YardbirdUploaded by Snowmanradio) [CC-BY-SA-2.0], via Wikimedia Commons>

The Varied Thrush (Ixoreus naevius) is a striking passerine that inhabits dense coniferous forests in Northwestern North America.  Within in the damp darkness of old-growth forests, their eerie whistle sings out in a long single tone, penetrating the shadowy depths of the understory.  It is often difficult to find these birds within the dense trees; this cryptic bird is primarily seen while foraging along edges of forests or in roads.   In the family Turdidae, along with the American Robin and other thrushes, the Varied Thrush is about the same size as a Robin with a more horizontal pose, and can often be seen foraging on the ground, much like its relative.

The Varied Thrush is a beautiful bird, adorned with dramatic contrasting colors; burnt orange, brownish gray, bluish gray, and black.  They have orange underparts, throat, supercilium, and orange banding on the wings.  They also have a dark band across the breast and a dark eye stripe.  Males have a distinct black breast band and supercilium; their upperparts and rectrices are deep bluish gray (Pyle 1997).  Females can be identified by their pale indistinct breast band, along with upperparts and rectrices that are brownish-gray (Pyle 1997).  Juveniles observed during the same summer they fledge will have mottling on the breast and no breast band.  That fall after molt, the young birds will look much like the adults of either sex, including a breast band, but a duller appearance overall (Pyle 1997).

The Varied Thrush song is a long, bell-like whistle that fades away from the listener.  During the breeding season, individual males will sing every few seconds, varying the frequency and amplitude of each song.  These complex song sequences may serve to reduce responses from other males (Whitney 1981).  During winter males may sing a short, abbreviated version of their whistle, however this is uncommon to hear (Swan, personal observation).  They also make very soft “took took” calls that were observed while birds were perched high in trees (Swan, personal observation).   Several call notes have been described that accompany agnostic displays (Martin 1970). 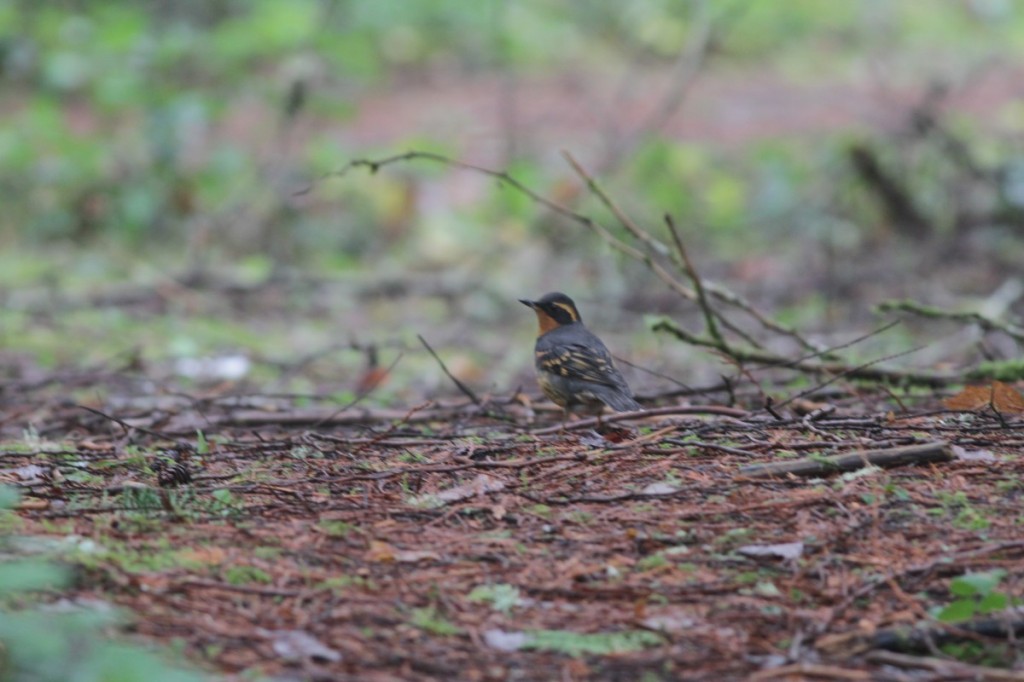 Varied Thrushes breeds throughout Alaska, including areas on Seward Peninsula, Alaska Peninsula, and Kodiak Island.  From Alaska the breeding range extends through parts of Yukon Territory, Northwest Territory, and British Columbia; Rocky Mountains of southwest Alberta, northwest Montana, and north and west-central Idaho; Blue Mountains of Washington and Oregon; northeast Washington; and from the eastern slopes of the Cascades west to the Pacific Ocean in Washington and Oregon.  Breeding range in California is limited.  The Varied Thrush breeds within moist, often old-growth coniferous or mixed forests within this breeding range.

During winter, this bird migrates along an elevation gradient; moving from high to lower elevations in the colder months.  Some birds winter locally along the coast of Alaska through the coast of British Columbia.  Other birds migrate to California or more coastal areas of Washington and Oregon (George 2000).  Many individuals wander far and wide, with sporadic reportings in the mid-western United States and as far south as Florida (Sullivan 2014).

The Varied Thrush breeds in moist coniferous forests with a dense understory, often with a steam nearby (Beck 1997).  They are considered a forest interior bird, having the highest density in undisturbed continuous riparian forests and at least 400m from the forest edge (Shirley and Smith 2005, Brand and George 2001).  In one study, Brand and George (2001) used modeling to estimate edge width requirements for several avian species; edge width was 140 meters for the Varied Thrush.  Estimating edge sensitivity helps identify species that may be sensitive to forest fragmentation; Brand and George (2001) found that the Varied Thrush, with its large edge requirements, is sensitive to forest fragmentation. Varied Thrushes’ narrow habitat requirements, along with continued fragmentation and habitat loss from logging practices, puts these birds at risk for abundance and distribution declines (Beck and George 2000).

Diet choice is based on seasonally available food resources and the birds’ nutritional requirements (Beck and George 2000).  Early in the breeding season, Varied Thrush feed almost exclusively on arthropods, which provide valuable protein to the female for egg production and the nestlings for growth and development (George 2000).  Later in the season, as the young fledge the nest, their diet shifts to the ripening fruit and berries (Beck and George 2000).  In winter, Varied Thrushes’ diet consists mainly of acorns, fruits, berries, seeds, nuts, and some invertebrates (George 2000).  During years of sustained heavy snowfall, Varied Thrushes have been known to forage among the tidal litter on beaches, presumably eating small crustaceans (Weisbrod 1974).

Flocks composed of hundreds of birds can sometimes be seen descending on large food supplies like cranberry bogs.  They are also occasional visitors to feeders.  When found in numbers, males will establish small feeding territories and aggressively defend them if pressed (Martin 1970).

Varied Thrushes use hopping as their primary form of locomotion while moving along the ground. They hop among the leaf litter, occasionally stopping to grab and toss aside leaves with their bill. They then scan the ground for any prey uncovered by the leaves.  When foraging in tree needle debris, they will dig with their bill and scratch at the ground to uncover food resources (Swan, personal observation).

Males are known to aggressively defend feeding territories during winter, using displays and attack.  Three displays have been described by Martin (1970):  Tail Up Display, Head Forward Display, and Quivering Display.

In Tail Up Display, the individual defending his feeding territory postures himself with tail raised, the underside of the tail positioned toward the encroaching bird.  The undertail coverts create a complex pattern of white and dark patches.  This posture is accompanied by one or two different call notes.

Head Forward display will often occur when two individuals are in close proximity facing each other.  Head Forward describes many postures along a gradient from low to high intensity.  At low intensity, birds hold their abdomen low to the ground with the tail partly fanned.  At high intensity, this low posture is displayed with a fanned tail and wings spread wide, showing off the orange banding.  A third call usually accompanies this display.

Quivering Display is made only by subordinate males immediately before they are attacked.  In this display, the wings are held at right angles to the body, quivering and vibrating rapidly (Martin 1970).

After migrating further north for breeding season, you may see groups of the flame adorned thrushes flitting around in the old growth tree tops occasionally fighting aggressively over a female. After that, Varied Thrushes are generally dispersed and reclusive. (Grinnell 1900). Egg incubation starts promptly in May and even occasionally as early as April (Bent 1964). Eggs are laid in nests typically 8 to 15 ft off the ground on a sturdy conifer branch or the crotch of a main-stem and distanced a half mile or so from other breeding pairs (Bent 1964). Nests are between 5 and 9 inches across and average 3 eggs colored pale robin’s egg blue with a few brownish spots. Pairs typically have two clutches in a year (Ben 1964)

Every year I. naevius migrates downslope or south to find better foraging grounds. BecauSe members of project feeder noticed an apparent cycle in the populations, an analysis discovered a biennial boom and bust cycle. Assumptions are that the varied thrush populations likely fluctuate do to similar boom and bust cycles in acorn production but no research has been done to confirm this (Wells 1996).

The Varied Thrush’s major concern is habitat loss and alteration. Not only are they partial to the limited supply of old growth forests but they’ve been shown to not occur in forest patches smaller than 16 hectares (George 2000). This could be related to preference or predation by edge species that have proliferated around human development like the American Crow (Corvus brachyrhynchos) and the Common Raven (Corvus corax). They’ve been shown to have a significant impact on old-growth species like the Marbled Murrelet (Brachyramphus marmoratus) (Luginbuhl 2001).

The Varied Thrush is intimately dependent on natural ecosystems; Katie S. Christie and Thomas E. Reimchen demonstrated in 2008 that the density of varied thrush populations in the Pacific Northwest was directly related to fish presence. Pacific salmon numbers are commonly as low as one percent of populations in northwest streams just 100 years ago. This is coupled with foressts taking as much as 80 years longer to develop without the marine derived nitrogen, the varied thrush’s primary breeding areas. Additionally if assumptions about biennial cycles are true, the boom and bust cycles could be do to limited oak trees so the loss of conifers and oak prairies could be detrimental in the long run..

While Varied Thushes are at risk due to numerous impacts and their numbers are declining, their range is so large and their decline small enough that they don’t meet any listing requirements for the IUCN Redlist or other government agencies (IUCN 2013). Since the varied thrush aren’t listed as a concern nor does major evidence show otherwise, there aren’t any large conservation actions in action.

In Washington state, breeding populations of Varied Thrush populations do seem to be on the rise  (p = .0015; North American Breeding Bird Survey Data).  Due to the Varied Thrush’s dependence on pristine habitat and the influx of edge species, they may be at risk in the future. However, with climate change we may see an increase of available breeding grounds that may benefit the thrush. What we can say is that populations of Ixoreus naevius are not in serious decline or currently majorly threatened range-wide or in Washington.

Kitchin E. A.. 1934. Early Nesting of the Pacific Varied Thrush. The Murrelet, Vol. 15, No. 2 52 Society for Northwestern Vertebrate Biology

Updated and revised by Allison Swan in Fall 2014.