I lose access to this page on November 17, 2018 and this page may be deleted. My research has been moved to this site. I apologize for the inconvenience. 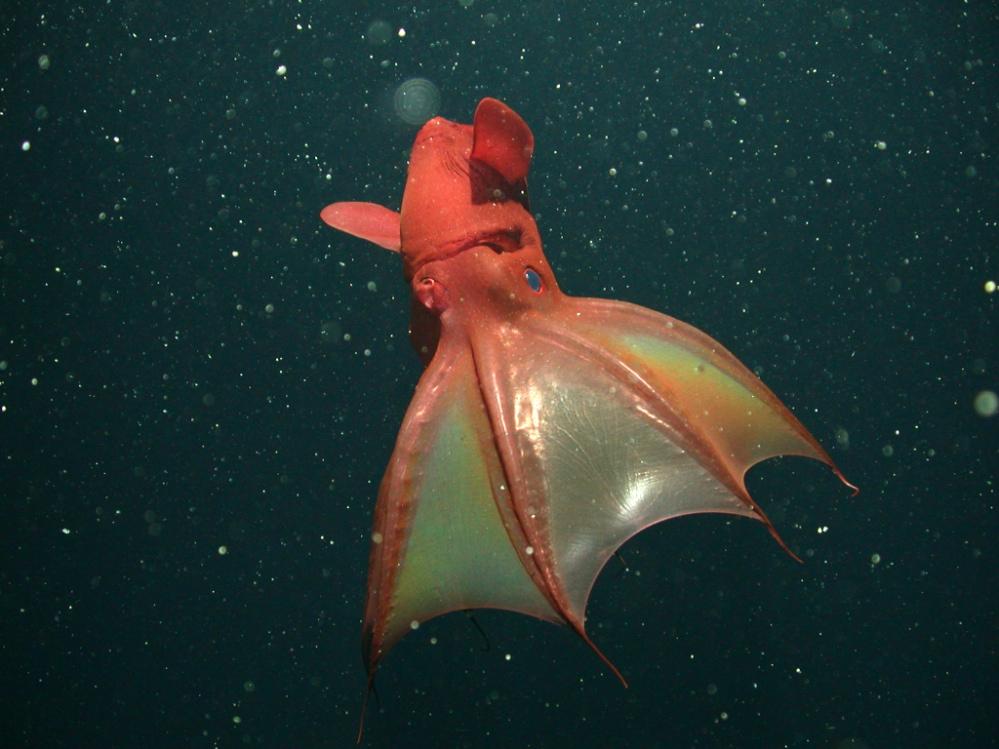 The feeding habits of Vampyroteuthis infernalis have been investigated through gut sample analyses, shipboard observations, in situ observations and stable isotope analyses. These observations have indicated a variety of food items including copepods, shrimps, squids, cnidarians and marine snow. Cephalopod radulae come in two basic forms: homodont with a single cusp on all teeth and heterodont that has more than one cusp on the rhachidian tooth and/or several teeth. Using light and scanning electron microscopy, the morphology of the vampire squid heterodont radula was compared to radulae of other cephalopods, including the Humboldt Squid, Dosidicus gigas, California market squid (Doryteuthis opalescens) and other midwater species. Scanning electron micrographs of radulae from over 15 species of cephalopods are compared in this study. Vampire squid have a unique homodont radula with a single cusp on all seven teeth. In comparison to the robust cutting heterdont radula and rhachidian teeth of shallow predators, the radula of V. infernalis has long gracile teeth that appear to be well suited to tearing apart very soft tissue and perhaps picking apart marine detritus. Despite living in extremely low oxygen concentrations with very low metabolic rates, adult vampire squid can be fairly active swimmers and likely feed on a variety of soft-bodied organisms. 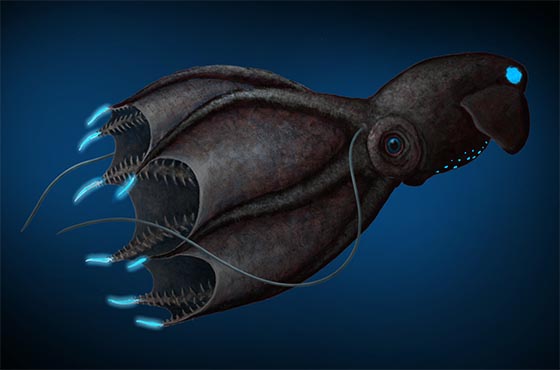 Most molluscs have a radula which is a specifically unique feeding organ that serves as a grinding mechanism to tear apart food into smaller pieces. In cephalopods, the radula consists of symmetrical rows of 7-9 teeth. The radula is most often studied using a scanning electron microscope (SEM) to observe the three-dimensional relationships between the rows of teeth.

Towards the front end of the radular ribbon, the teeth become worn in feeding and are replaced by lower teeth continuously forming in the radular sac. The whole ribbon moves forward while modified odontoblasts dissolve and absorb older teeth and membranes. This movement was compared by Huxley (1853) to a chainsaw, with backward movement of the ribbon thrusting food into the pharynx.

There are two basic forms of cephalopod radulas, the homodont radula with a single cusp on all teeth which are similar in form across a row and the heterodont radula that has more than one cusp on the rhachidian tooth and/or several teeth. Form and shape of molluscan radular teeth are commonly exclusive to a species or genus. Each row of radula teeth consists of one rhachidian tooth followed by one or more lateral teeth on each side, and then one or more marginal teeth.

SEM photographs were taken to further study the radula in detail. Several methods are available in regards to preparing and mounting the radula of several mollusc species for SEM observations, but only one in specific detail about cephalopods. Zheng (2002) was the primary resource of this paper.

Radulae or buccal cavities were retrieved from three cephalopods. Two radulae from Dosidicus gigas were given by the Gilly Lab from Hopkins Marine Station of Stanford University. Vampyroteuthis infernalis was given by Dr. Erik Theusen at The Evergreen State College. Doryteuthis opalescens was self-collected in San Francisco, CA.

The radulae were observed under the scanning electron microscope using the following protocol, Zheng (2002): radula was washed with diluted water three times in order to wash away food residue and other adhesive materials. The tissues were immersed into a 1% KOH solution for 24 hours, where specimen were then prefixed for 12 hours in 3% glutaraldehyde at 4°C.

After being washed with diluted water three times, the tissues were dehydrated rapidly through a graded ethanol series (30, 50, 70, 80, 90, 95%) for 10 minutes each, and placed through a grade isoamyl acetate series. The tissues were CO² critical point dried, and coated with gold. They were then examined with the JEOL JSM-6480LV scanning electron microscope. Some specimen were examined using the Z-stacking stereo microscope Leica MZ16.

Through emailing researchers and finding what is local, 15 species were prepared over the course of my research.

ADDITIONAL PHOTOS FROM MY RESEARCH

OTHER RESEARCH ON OTHER CEPHALOPOD RADULA

OTHER RESEARCH ON OTHER MOLLUSCA RADULA

OTHER RESEARCH ON SERRATION

I would like to thank Dr. Erik Thuesen for sponsoring my research project to further my knowledge of SEM techniques and cephalopods, as well as for donating Vampyroteuthis infernalis and Taonius borealis from a MBARI Research cruise.

I thank Patrick Daniel from the Hopkins Marine Station of Stanford University for responding to my inquiries about specimen needed and donating the radulae of Dosidicus gigas from their Bay Area Science Festival’s Discovery Day display at AT&T Park in San Francisco, CA.

I would like to thank Denise Whatley and Tonmo for donating Octopus briareus, Nautlius pompilius, Sepia bandensis and Octopus hummelincki.

I also thank Eric Koch, a PhD student in the lab of Margaret McFall-Ngai/Edward Ruby for catching Eupyrmna scolopes in the shallow sand flats of Oahu and sending several samples to me.

And finally I would like to thank my parents for helping me find several specimen of Doryteuthis opalescens and teaching me how to cook squid adobo.

The TEXT of this page is licensed under the Creative Commons Attribution-NonCommercial License – Version 3.0. Note that images and other media featured on this page are each governed by their own license, and they are available for reuse with proper citation.