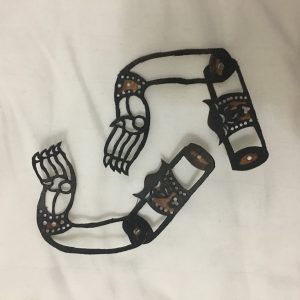 Khmer shadow puppets I made in Cambodia

Shadow theater is common amongst Southeast Asian countries that share some cultural history such as India, Cambodia, Thailand, and even down to Indonesia. Each culture displays itself in its different theater with their own traditional dance and music. Cambodia is no different, using leather rawhide to carve out the shadow figures, different then those in India and Thailand that have more complex moving parts, the Khmer variety are made from one solid piece of leather, carried by a single dancer. The Khmer theater is also distinct to the Reamker which is a popular story told through L’khaon wich traditional dance often depicted with the “Apsara” heavily hand gesturesed dance. The Apsaras are like that of the Aesir pantheons Valkyries – Heavenly beings who come to help earths inhabitants by teaching the secrets of the gods through dance, each hand pose is another “word” of god. The theater dance Reamker, is the Hindu epic of Rama only the Khmer interpretation to Buddhism, as shown in the walls of Angkor Wat.  I was able to take a leather carving class at Sovanna Phum theater in Phnom Penh, though we couldn’t speak a come tongue the universal language of “na na na” and “hmff hmff hmff” meaning watch and do. In the class it was a lot like working on sheet metal, though a lot more giving. Aside from being able to dabble in a new form, I really enjoyed seeing the homemade tools they had. Punches and chisels made from scrap metal, and old tools, similar to the hardened steel ones I made working under my mentor in Olympia (making tools for metal working). I was mostly left alone and in that time I was able to draw many connections, where streams of thought looked more and more like a busy road map, much like the shared histories  of the region, unique cultures rising out of shared past.