Geez, how much walking can a person endure?  Maybe (or is it mebee?) my faithful shoes are giving out.

I thought I might take an umbrella today, I’m glad that I changed my mind and wore my rain jacket.   I started out late and headed out to find the bus stop to go to the House for an Art Lover.  I finally found it and some small print read something about not on Saturday and Sunday ( which at the end of the day, I found out I read in error.). I hailed a taxi and why didn’t I have my voice record with me?  I could hardly understand him at all, but he understood where I wanted to go.  The House for an Art Lover is a mansion sized house that Mackintosh and his wife designed for a German competition in 1901.  The competition challenge was to design a “thoroughly modern house for an art lover.”.  They didn’t win, but neither did anyone else, instead all the best designs received a prize of money.  The project was never realized but the plans were archived.  In 1989 Graham Roxburgh got the Idea to construct the house in a park setting: Bellahouston Park.  After the project got underway, the City of Glasgow joined in and the house was finished in 1996.  Artists, architects, and museum archivists from The University of Glasgow, The Kelvingrove Museum and the Glasgow School of art were employed to build, sew, paint, glaze and otherwise compete the exterior and interior following plans and samples of Mackintosh and Macdonald’s work.  The house is stunningly beautiful.  Minimalistic, natural tones and materials and their signature stylized rose everywhere.  Unlike the other venues that I’ve now visited, I was able to take pictures, and I snapped away at every detail.  The house can be rented for ceremonies and today after closing hours there was a wedding gearing up.  The dining room was already set, each table’s identifier was the name of a Beatles’ album.  A formally dressed piper was piping to greet the guests.  Aye, very Scottish. 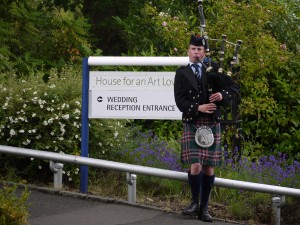 When I left to walk to another park to indulge a non-Macintosh exhibit–the Burrell Collection, it started to drizzle a fine mist, then moments later a downpour.  I ran under a tree to wait it out and talked to a couple who had been to Portland.  They encouraged me to go on a day trio to Edinburgh, and so I will.  —  After viewing the small Burrell art collection in another mansion in another park, I had to walk quite a ways through the huge park to get to a street to hail a taxi.  I had doubts being all alone on the path that I would ever find it, but I did.  Now which way do I stand to get back to the guesthouse?  I asked a bus driver who was stopped and he said (listening hard I could understand) he’d take me to a bus stop where I could get s bus that would drop me close to where I could walk to the guesthouse.  So I switched buses and made it back.

People are polite here, they say thank you to the bus driver.  I have been treated in a kindly manner.

This entry was posted in city Impressions, Field Study Progress. Bookmark the permalink.