Another gorgeous weather day in Glasgow, but my feet are aching.  I walked to the Mackintosh building, Queens Cross Church ( his only church design ), to find it closed.  Other people came too, and one assertive woman made some calls and reported that today is a bank holiday.  I took many pictures of the outside of the building, and in the past, I have been satisfied with that, but since I’ve seen his interior work, I want to see the inside too.  I’ll go back tomorrow.  On the way back towards ”my” West End, I stopped at a nice looking cafe and had to try the coconut and 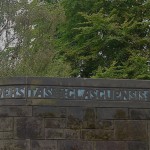 jam torte, which was delicious with green tea.  Then more walking, walking through Kelvingrove Park to the University of Glasgow.  It’s an old one: 1450. There too, the gallery was closed because of the holiday.  I decided to try out the voice recorder and found out it’s easier to surreptitiously record people than I thought.  Maybe they think it’s some strange cell phone.  I have a lovely contrasting duo of directions said by a student-type with a briefcase and a construction worker at the University.  Listen here:  University Man Construction Worker

I was getting tired, but pushed myself to go to the Kelvingrove  Art Museum–through the park again and towards the guesthouse.  The museum was OPEN. Even though it’s a no photo museum, many people were snapping, so I spent some energy quickly taking the camera in and out of the case and taking forbidden pictures.  Again, so tired, I sat on a bench and gained some energy to look a bit further into the Museum, amd I’m so glad I did.  I heard about Scottish art, but thought it would be stuffy– not so.  There was a group called the Glasgow Boys who painted and consulted with each other from 1880 to 1895.  Their aim was to  transform Scottish art from it’s sentimental style to a new way with color, texture, light and patterns by using sweeping instead of precise brushstrokes.  George Henry did some beautiful paintings of Japanese women in 1894, and there was a stunning large scale portrait of Pavlova done in 1910 by John Lavery.  Oh, there were so many wonderful paintings by Scots.   I also saw some Glasgow city photographs that reminded me of Helen Leavitt’s work in New York.  The photos were taken in the 1950s by the Partick Camera Club; they called that collection, Glasgow and it’s People.  Strangely, I missed the full exhibit by a week, when I was at the Burrell Museum the other day.  You have to live in a city to catch all that it offers.  There was statement near the photos in the collection that I did see today that referred to the fact that cities and photography go together beautifully.   Then I was REALLY tired and walked to Mother India for a meal–the best Indian food I have ever eaten, and in a nice upscale restaurant decor complete with Bollywood posters, and moderately priced to boot.  Mmmmmm, the thick mango lassi was a real treat.

This entry was posted in city Impressions, Field Study Progress. Bookmark the permalink.