Charles Darwin’s Love Affair: The Sundew to his Moondew 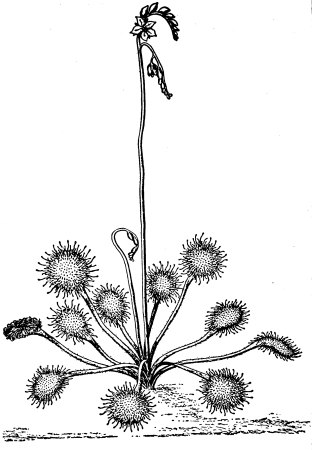 The Evolution of the Sundew

Charles Darwin did more than just create the evolution theory, he also had a little known love affair with a type of meat-eater called the sundew. Even Darwin’s wife noticed his fascination with the genus Drosera, which means dewy in Latin.

“I care more about Drosera than the origin of all the species in the world”.

Darwin lost himself for years compiling drawing after drawing, experiment after experiment into his book that was later published under the title “Insectivorous Plants”, around 1876 (Hoot).

Plants are classified into seven major levels: Kingdom, Phylum, Class, Order, Family, Genus, and Species. These classifications, or the plant’s taxonomy, tell a story about a plant’s common ancestry. For many years, scientists assumed that all carnivorous plants shared one common ancestor simply because of the uniqueness of their feeding habits.

In the late 1980s, however, scientists discovered that carnivorous plants in fact evolved independently six or more times within five separate orders of plants. This means that most carnivorous plants are only distantly related to each other and evolved to become carnivorous in a variety of geographical regions from unrelated organisms of origin. This idea is called convergent evolution, where organisms that are distantly related, or monophyletic, develop similar traits to adapt in environments with many of the same conditions. This was just one more reason why Darwin was so enthralled with these insect-devouring plants.

These two pictures represent convergent evolution, as birds and bats are not closely related but they have both developed the ability to fly.

So why did all these plants suddenly jump on the carnivorous bandwagon, so to speak? What do the environments in which these plants dwell all have in common that make them so welcoming for bug eaters like the sundews? Carnivorous plants live in bogs and swamps the have very low nutrient soil. The abundance of water in these areas flushes out almost all of the nitrogen and minerals from the soil, so the plants in these areas must adapt to get their nutrients elsewhere.

As it turns out, carnivorous plants actually hunt for the nitrogen found in the insects they trap. This nitrogen is absorbed by the plant where it goes on to aid the plant in photosynthesis.

The Sundews caught Darwin’s eye through his extensive research on plant movement. He studied the way plants opened and closed, the way they moved towards light, curled their stems around objects, and moved with changes in how gravity was affecting them. Then, he discovered carnivorous plants. Darwin preformed a multitude of experiments on plants like the Venus Fly Trap, Pitcher Plant, and the Sundew. Through his experiments, he sought to answer questions like how food was absorbed, what kinds of food had different affects on absorption rates, what had an effect on the plant’s reaction, and how the signal for movement was triggered and carried out within the plant.

Darwin’s affection for the Sundew was also an artistic one. He drew numerous drawings over the course of years. He kept his own sundew plants in his possession in order to research and study them. He illustrated their various positions and features. Darwin was a true Sundew fanatic.

Biology for Kids. (n.d.). Retrieved May 19, 2016, from http://www.ducksters.com/science/scientific_classification.php

Joest, M. (2014). Charles Darwin Loved Carnivorous Plants Above All Else. Retrieved May 19, 2016, from http://www.cinemablend.com/pop/Charles-Darwin-Loved-Carnivorous-Plants-Above-All-63598.html

Power of Movement: Insectivorous Plants. (2009). Retrieved May 19, 2016, from https://darwinsflowers.wordpress.com/exhibit/insectivorous-plants/