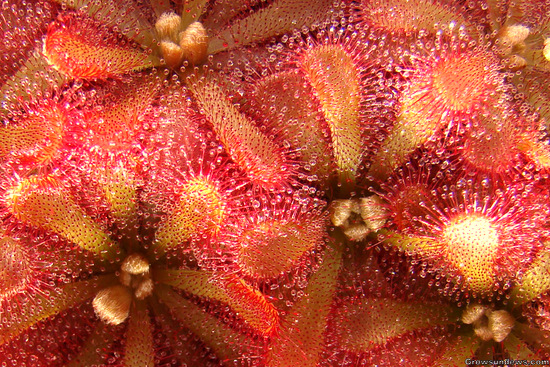 All the Colors Under the Sun(dew)

The carnivorous Sundew plant has been the subject of several studies regrading it coloration which varies on species and can literally be any color under the sun. Not only can Sundews be all different color they can have varying sizes, shapes and length. These plants vary so much, one of the only common factors between the species is that they are carnivorous. These insect eating plants are vary on how much nutrients they get from insects as well, with some thriving on insect nutrition and other preferring water and soil nutrition. This is why the Sundew is so interesting, is because of all the contributing factors that make up just one species of the wide variety. Though there is a huge selection, in my blog post I will be focusing on primarily the color of these plants and their color has been puzzled over. 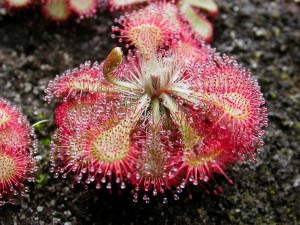 To start off the Sundew plant is in the genus Drosera and has around 200 species which is quite big for carnivorous plants. these beautiful plants are native to every continent expect for Antarctica. Most Sundew plants thrive in poor soil because of their adaption to eating insects. Sundew plants come in all different colors regarding their tentacles, dew and flowers. However, scientists being scientists wanted to know why their tentacles and dew came in different colors. They understood why they flowered different colors. Every flowering plant has different colors to attract pollinators so, they can reproduce. However, this doesn’t explain why all year long Drosera plants have different colored tentacles and dew. These plants don’t reproduce all year long so these varying colors have to be for another purpose. For many years every botanist thought it was to attract insects. This is because, when you neglect to water the Sundew and prevent it from receiving a minimum of six hours of sunlight every day the plants colors become more vibrant. A once originally Albino Sundew (white tentacles and clear dew) starts to become a vibrant pink and a once green Sundew ( green tentacles and light green dew) starts to become a more sea green (Aaron May). These changes of colors were thought to attract more insects and therefore more energy for the plant. And, this is true in some cases.

As an overall concept,  “carnivorous plants attract, trap and digest animal prey, using the nutrients gained to enhance fitness” and this includes Sundew plants (Foot, Rice and Millet).  These plants attract their prey through olfactory senses, nectar and visual cues. These visual cues were thought to be the coloration of the Drosera plants tentacles because it would contrast with the usually boring background. This contrast would attract pollinators or insects and from the plant would trap them. This concept was proven wrong however in a species of Sundew called the Drosera routundifolia or commonly called the round leaf Sundew. The Royal Society put out an article written by three botanists named Glenda Foot, Stephen P. Rice and Jeanne Millet regarding the coloration of  Drosera routundifolia and their feeding habits. The three scientist conclude that there was no correlation between the coloration of these Sundews and how much prey they attracted. In fact, the bigger leaves attracted more prey rather than the number of leaves of the coloring. They even proved another thought to be truth about these mysterious Sundews – that their colors do not help with camouflage. 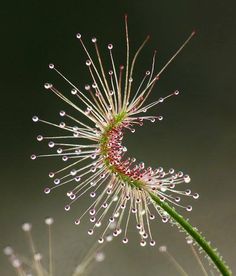 Previously before this experiment many botanist thought that coloration in Sundew
plants are contributed to camouflage. The reason to blend into the background is based around attracting insects who get fooled into landing on something that looks like a leaf, which is just the green part of the tentacle of this red Drosera routundifolia. This also proved false with no correlation to attracting more insects.  However, though this study and another following it by two botanists Thomas E. White and Darrell J. Kemp, concur that Drosera routundifolia does not use color to attract prey, that is only one species out of 200.

Trying to define why such a wide variety of plants has the coloring they do is like trying to define all the colors under the sun. Each plant though in the same genus has different reasons for adapting the colors that they do. To conclude the colors of Sundews are wide varying from a rich purple to a vibrant pink and scientist still puzzle over why they have such dazzling colors. These plants not only have a wide spectrum of colors but also physical shapes of their plant bodies. They come in all shapes and sizes and grow all over the world. This is what makes Drosera plants so interesting – their vast yet similar attributes. No wonder great scientist like Charles Darwin loved these enigmas. After much research I have also come to the realization of how awesome these plants are and have genuinely enjoyed learning about them. Hopefully in the future botanist will learn the reasoning behind the coloration of these plants and gain more insight into how carnivorous
plants lure their prey.