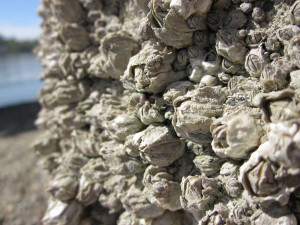 Barnacles are unlike any other crustacean because they are sessile. They are permanently attached to objects such as docks, boats, rocks, or turtle shells. 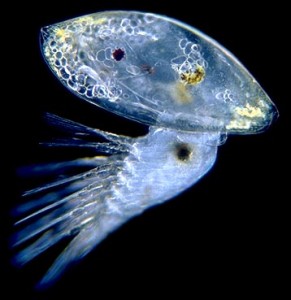 Standing on their heads for most of their lives, they feed when under water by sticking their feet out of the shell and eating whatever passes by or gets caught in their appendages (plankton, microscopic plants and animals, their own young).

The larvae swim along the ocean floor until they decide on a place to settle. They glue down their head with a cement stronger than most human produced acids, and secrete a limestone shell from their antennae that forms around their bodies. (Gary H. Dickinson of the Journal of Experimental Biology, 2012). Barnacle Larvae photo(right) (Wim Van Egmond ‘Living on the Edge’ 1999). 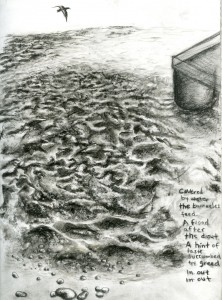 Barnacles are found in fossils as far back as 500 million years, although when they die, their shells fall apart so it is hard to find complete fossils. They live all over the worlds shorelines and are usually a bother to sailors because they attach to boat hulls and slow down the movement. However in some places, such as Portugal and Spain, barnacles are considered delicacies. There is a major market in hatcheries and collection. Their major predators are Whelks, who detect them by smell and have a spiral shell and feet designed to drill into the barnacle shell (Paul Hatcher and Nick Batty, 2012).

A major organ that barnacles don’t have that humans do, is the heart. They are hermaphrodites and have the longest phallus out of any animal compared to their body size, usually seven times the length of their body (Henry Jones and McLaughlin, 1986). 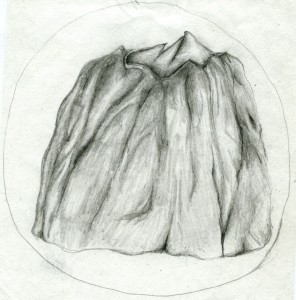 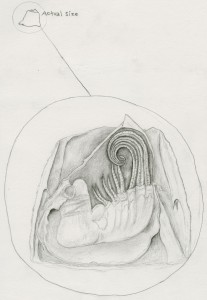 Before people realized that birds migrated, it was thought that a species of Geese hatched from barnacles (Michael Allaby, 70-75). 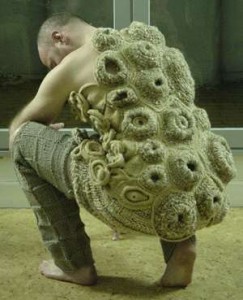 Whether for satire or not, barnacles have shown to be increasing in fashion trends. Stephane Martello’s barnacle knitwear collection, 2011(right) is an intricate piece of artwork. There are many clothing lines similar to the shirt to the left from Zazzle.com (Zazzle, 2011). The strangely humorous barnacle clothing is becoming trendy, and leads one to wonder about the root of the fashion phenomenon (Stephane Martello, 2011).Barnacles were first studied by Charles Darwin who published a series of monographs in 1951. In Rebecca Stott’s book, “Darwin and the Barnacle,” she historically accounts Darwin’s research on barnacles before his main publication “Origin of the Species.” She describes how this tiny item of curiosity largely contributed to the biggest scientific discoveries (Stott, 2003).

No, I really don’t like you
now that I know all of these disturbing scientific facts.
So I learn about you and you become more real.
At least to me.
I am starting to see you as human, terrible people who eat their babies,
but still human.
I try not to humanize,
but all I can see when I look at you are
those evil grinning mouths.

I saw a chair covered in dead barnacles.
I had never thought about the easiest way to kill a barnacle,
just take it away from water. Breaking the shell is harder, but this made them seem so much more vulnerable. I was sad by this aesthetically pleasing massacre.
Despite everything I have learned that was so disturbing to my human mind,
I realized that barnacles are true animals with a different kind of mind than humans.
It is not useful to judge them from a human perspective, although there is no way I fully cannot. I need to look at them as fascinating, strange, mysterious creatures and try to put them into a light for other humans to understand. 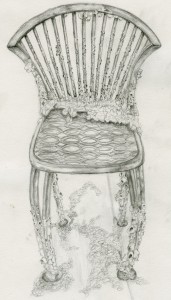 Your dry and dirty shell,
surrounded by others, motionless on the sunny piling.
The young, a pure white, the old, an algae grey,
but all squeezed tight
together,
bonded like the roots of an old growth.
You pierce the air with stillness
hours before tides rise to settle the hungers.
To be alive is hiding and waiting for food and mating.
To be dead is emptiness: a shell with remnants of your inner forms,
a remembrance of the beast.

“Hello there barnacle.”
Do you understand me?
Do you know that I am here, sitting on my rock watching you sitting on yours?
I see now that my observation is one-sided.
Of course my eyes will humanize,
and your true self will always be a mystery.
But when you finally move,
retracting less than a cm into your shell.
barely there,
but there.
My chest freezes,
I feel I’v seen a secret, proof that you are a life.
I try to sense what you sense, so I pretend to become you, but only how i see you,
the truth is forever unknown.

I am an animal observing another animal,
a beast, who cannot understand the beast I question.
This is a single entity, one human being
attempting to communicate to other human beings,
the inner workings and soul searchings of the alien:
unknown:
the barnacle.

Jones, Henry and McLaughlin. Barnacle Diagram. Digital Image. The National System for the Prevention and Management of Marine Pest Incursions. 1986.