Ardea herodias a study by Lauren Steury
Observed at Heron Sanctuary on Dickenson st NW Olympia, WA in their natural habitat. They are home to North America especially the Pacific Northwest.

There is a Great Blue Heron sanctuary near my house, where I have been observing nesting herons for over a month. I used a sketchbook as my field journal to note and sketch my experience. I studied their natural history and did cultural and image based research to deepen my understanding of the life of the Great Blue Heron. Through out this process I developed my own interpretation of the herons which I expressed through writing, drawing, and animation.

rom a near by evergreen. It’s carrying twigs and branches. It’s raining, there is squawking as heron approaches, another sits on nest and makes rooster noise. ooOo oo. oo.

Reflection:
This is the first week I feel familiar with the herons. I have some suspicions as to what their behaviors mean. They often sound like giant hens and I wonder if they have complex thought, as I presume they do. Also I see one heron bring twigs to the nest, building it. The building of nests fascinates me.

I have discovered a cluster of nests which I observe, and I get the feeling there is a lot I don’t see.

Research
While researching Great Blue Heron intersections with modern culture, I found interesting social commentary and analysis. A blog revealed deep personal connection and interpersonal symbolism with the blue heron (Lion), and Cornell University hosts a live webcam of a Great Blue Heron nest that provides a chat room where the herons can be constantly anthropomorphized by online viewers. (Powell) They even broadcast the hatching of the heron eggs in this video. .
Citation: LabofOrnithology. Great Blue Heron Hatching Eggs 1 and 2 (Part 4/5). Youtube.30 April 2012. Web. 31 May 2012. link. 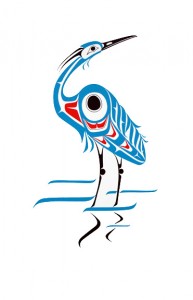 I also found Native American references of Great Blue Herons in stories, including one from the Algonquin Indians. (Honeyed Words Can’t Sweeten Evil)

I did visual research and found images of herons as far back as 450 BC. (Dexamenos) The rhetoric of the images varies, but the heron is most often pictured alone, as a solitary creature, standing tall with its neck curved. This image is a Native Art image from the Pacific Northwest by Glen Rabena, and shows one interpretation of the Great Blue Heron.

I also did Natural History research and studied their habitat, behavior, and appearance. Great Blue Herons are the largest herons in North America. They live year-round where ever there are wetlands, fresh or salt water, but they leave the nesting grounds after the mating season.

Expression
Through out this process I related to the herons through art and creative writing.

Perched on old wood downed with vine,
An entanglement of stick and twig,
A spread of gray blue
Who painted on your tattered wings?
And sewed the feathers on your chest,
Like a draping crown.

In the attic of a moss dripped tree,
You are a wood-saw, a bird cry,
Enclosd by a slanted ceiling of entangled branches
liked laced fingers.
The moon is your night light.
Through air windows you call out

Still I haven’t heard you in the night.
The Great Blue Untouchable,
Nesting warmth and void, three stories up
Or standing below the water
Still, the soul of a statue

What do your hollow bones hold?
Folded wings hold ancient form
of heron grandmothers, evolved into you.
In stillness I wait to see you dancing,
To hear a great blue mantra,
To see you balance on one tall stilt.
Whose spirit are you anyways?

I know the stillness, and sound.
I have a nest, I carry it on my head always unfolding
Always needs washings, if I were oil feathers
And could never get wet,
I would seek the tree top blue
I would stand in the rain,
Wade into the bay, till it’s just below my knees
And read fortunes in the reflection,
Collect rocks from the bottom,
Stick my head in for a fish,
And let it go.

These were character designs for a “pure animal” representation of the heron where I would attempt to portray it as accurately and naturally as possible while keeping a simplistic drawing form.

This design is myself as Great Blue Heron, essentially a self portrait as an animal. I can be identified here wearing a sweater and holding a cup of tea.

Animation
This was a rough draft plan of an animation 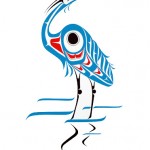 Rooster
Noun. The male of domestic fowl and certain game birds; cock. Animal Dictionary.com
Rhetoric
Noun. The art of speaking or writing effectively. The study of principles and rules of composition. The study of writing or speaking as a means of communication or persuasion. -Merriam-Webster English Dictionary
Abyss
Noun. A distance or separation between two things. The Animated Bestiary