Asian elephants are intelligent animals with complex family structures. They are matriarchal, mourn their dead, band together against common enemies, adopt orphans, communicate over long distances, and have incredible memories. In our culture they represent the majesty and mystery of nature and they also play a clown-like role in the world of circuses and animation.
The specific elephant I have been studying is named Suki. She was a circus elephant for 25 years in Thailand before coming to the States to be the matriarch in the small Point Defiance Zoo herd. 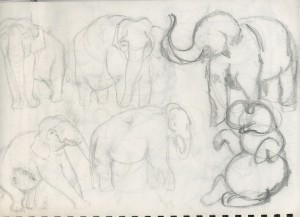 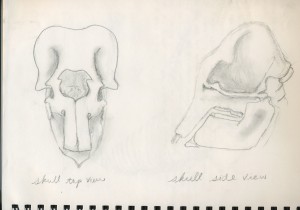 The order Proboscidae includes some distinguished families other than the elephantidae, all of which are now extinct. The best known of these is the Mastodon, which roamed all over the world, including North America, from 25 million to 11,000 years ago.  Their extinction remains a mystery, though it is theorized that climate change and hunting by humans played a role.

Within the elephantidae family alone there are also some well known species that evolved separately from elephants. The oldest of these is called Primelephas, which was around between 7 and 5 million years ago. It had two sets of tusks, one on its upper jaw and one on its lower, which was not very practical! The best known of the extinct Elephantidae is of course the Woolly Mammoth, the cold weather elephant model. They developed during the ice age, probably out of Siberia and inhabited a wide northern range, all the way from Ireland to eastern North America. They became mostly extinct 10,000 years ago, though some survived as long as 3,700 years ago on a small island called Wrangle Island. These were dwarf-sized and stood no taller than goats! 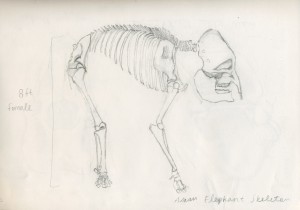 The basics:
Head and body length: 18-21 feet
Shoulder height:
Male: 8-10 feet
Female: 6-8 feet
Weight:
Male: 12,000 lbs
Female: 9,200 lbs
Coloring:elephants are predominantly grey. They often have some mottled pink freckles on their ears and faces. This is genetic and can be used to determine race.

The Difference Between Asian and African Elephants: 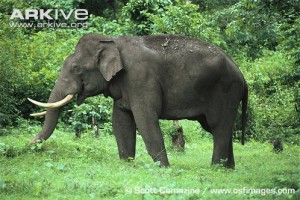 Asian elephants are much smaller than African elephants; they can weigh as much as 2,000 lbs less.

Asian Elephants have a two domed head while African elephants are smooth and single domed. 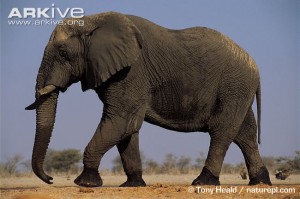 The highest point on an Asian elephant is on its back. On an African elephant it is at the shoulder.

African elephants tend to be more wrinkly and have looser skin, while Asian elephants have more hair especially on their backs.

Only male Asian Elephants are tusk bearing, while both male and female African Elephants have tusks.

Human beings have been hunting members of the elephantidae family for thousands of years; mammoths have appeared in cave paintings as early as the Pleistolene epoch, between 2 million and 10,000 years ago. 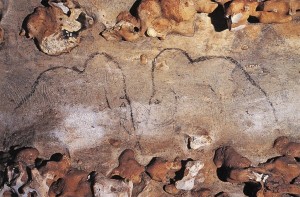 This particular cave painting is in the Rouffignac Cave in southern France. It was painted between 11,000 and 18,000 years ago.

Elephants have also played important roles an various mythologies. Ganesh (or Ganesa) is the Hindu God of obstacles, beginnings, and also has ties to the physical world in the form of the arts. He appears in various forms, one of which has the head of an elephant. He is one of the most well known and beloved of the Hindu gods. 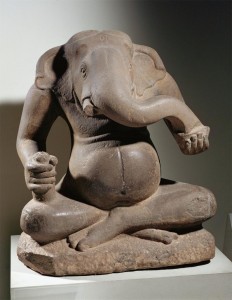 An Indian statue from the late 18th century

The Problem with Circuses
Elephants have also appeared in our culture as members of the circus. Because of their ability to learn commands they are wonderful performers.This is highly controversial however – the elephants are often mistreated during training. Circus elephants are separated from their mothers as calves and then chained in place for as many as 23 hours a day in order to make them more obedient. The training process itself can be bloody; chains and bull hooks are used to force the elephant into doing what the trainer wants. During travel, elephants are chained in place for as many as 26 hours at a time. Some elephants eventually snap under these circumstances, becoming violent and dangerous. Since 2000 there have been more than 35 incidences involving elephants breaking loose from circuses. These incidences can be very dangerous for civilians, trainers, and always end with the elephant’s death.

Appearances in Animation
Elephants appear in many animations, too many to include here. Probably the most famous was Dumbo, which was released in 1941. Disney created Dumbo to make up for the financial losses of Fantasia (which also featured some dancing elephants!). It is very short – one of Disney’s shortest feature length films – and is deliberately very simplified. In the film Dumbo overcomes the setback of having huge ears to become the most famous elephant of all because of those ears, a common theme in animated elephant stories 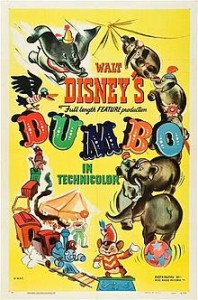 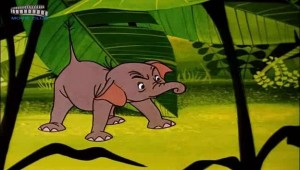 Still from the 1960 short Goliath II

In Goliath II a short Disney film, Goliath II is a very small elephant and his father, who is the biggest elephant of the jungle, is ashamed of him. Eventually Goliath II proves himself by defeating a mouse that was scaring the other elephants.

This theme also appears in Elmer Elephant, a Silly Symphonies short from 1936. Elmer has a crush on Tilly Tiger, but all the other animals make fun of his trunk. After some encouragement by a giraffe, Elmer and his trunk save the day by putting out a fire at Tilly Tiger’s tree house.

This theme also appears in Elmer Elephant, a Silly Symphonies short from 1936. Elmer has a crush on Tilly Tiger, but all the other animals make fun of his trunk. After some encouragement by a giraffe, Elmer and his trunk save the day by putting out a fire at Tilly Tiger’s tree house.

Fear of Mice
It is a common myth that elephants are afraid of mice. One of the earliest appearances of this myth is in Pliny’s Natural History, first published in AD 77-79. This is the quote from the book:

The myth has been propelled by films like Dumbo as well as Goliath II, which shows elephants being terrified of mice.
Whether or not it’s true is up for debate, however MythBusters did do an investigation. Check out the clip: 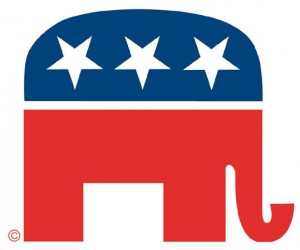 The Republican Elephant first appeared in the political cartoons of Thomas Nast in 1874. Nast had been a loyal Republican but felt they were leaning towards social liberalism and was frustrated with the party by 1870.

Below is the original cartoon by Thomas Nast published in 1874. It is called “Third Term Panic” and shows the elephant (labelled Republican vote) being frightened by a donkey in lion’s clothing (labeled Democratic vote) and jumping into the pits of Inflation and Chaos. Nast continued to represent the parties with these animals. There is 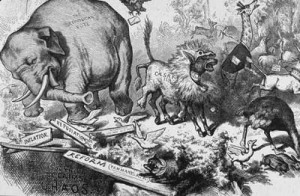 explanation for why they remained the official symbols for the parties except that Nast was an extremely influential artist, and respected by great minds of the time.

Hunting Elephants for their tusks has been common for centuries. The practice is mentioned in Pliny’s Natural History, explaining that only the tusk is real ivory and the bone doesn’t count. Currently the hunting of elephants for any reason is illegal, but because of lack of reinforcement, especially in Asian regions, there is still a lot of poaching going on. Good data is difficult to come by because of the illegal nature, but there have been alarming drops in the numbers of Asian elephants, partially due to being widely hunted.
Asian elephants are less prone to being hunted for their ivory than African elephants because only male Asian elephants produce tusks and both sexes of African elephants are tusk bearing. However, this creates a different set of problems for Asian elephants: a huge imbalance of male to female elephants. This is a problem because it decreases the gene pool needed to keep a healthy population. Another result of this poaching is that male Asian elephants are being born more and more frequently without any tusks at all. Scientists suspect that eventually we will lose the tusk gene completely. 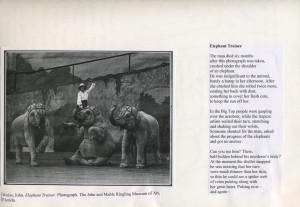 I.
In the morning, elephants came
up to the bones of some
old companion, now bleached
bright with sunlight.
They pressed against the bones
and it must have felt right,
their skin having touched elephant
bones before, being made of the same
stuff at the core.

I don’t know if I would
recognize my sister’s bones
if I found them scattered
naked in the jungle.

I don’t know why they pressed
the ends of their trunks
to the flat places on that skull.
Their sides flexed like bellows
when they sighed and I thought
they might have been kissing her,
the way I kiss letters
before I send them.

I loved observing and getting to know Suki. She has a lot of personality – watching her interacting with Hanako was at times hilarious and sometimes very sweet. 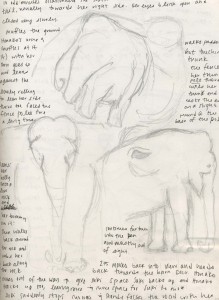 On the right is an excerpt from an early observation of Suki and Hanako. Note that the sentences are kind of jumbled around the sketches because I was trying to write so fast! 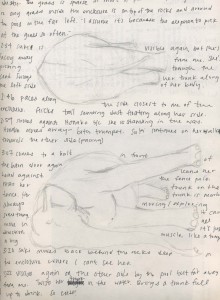 On the left is a later observation. The words are still kind of difficult to track, but I was able to stay better organized with practice. Also notice how much the sketches improved over time!