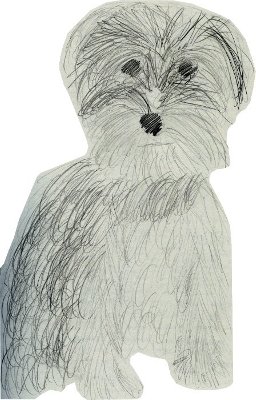 Introduction: I am a cat person through and through. However, for this project I decided to walk on the other side of the road, and I met just the dogs to help me. Throughout this project I have observed two Miniature Schnauzers, taking most of my notes on one in particular, named Bowser. He has been the source of my curiosity about the breed and the inspiration for my art, writing, and animation.

The Miniature Schnauzer is a terrier type. They range from 12 to 14 inches, and weigh 14 to 20 pounds for males, 11 to 15 for females. Their life expectancy is 12-15 years. They have a double coat, the outer coat is hard and wiry. The dog’s fur can be “salt and pepper,” black and silver, white, and black. Their skin has uniform pigmentation. Their head is rectangular and the top part of the skull is flat and long. Thick whiskers grow next to their muzzle. Their teeth meet in a “scissors bite,” which means the upper front teeth overlap the lower front teeth, causing the inner surface of the upper incisors to barely touch the surface of the lower incisors.

Their neck is arched, their shoulders are sloped, and their body is short and deep with a straight backline. The tail is high set on the body. Their feet are round and short, and their toes arched and compact.

Fortunately, this breed does not carry too many health problems. Weight gain is one of their biggest problems, but can easily be controlled by giving the dogs plenty of daily exercise, either out in the yard or just playing fetch in the house.
One increasing concern for this breed is pancreatitis. This seems to be connected to the fact that these dogs have high blood serum lipids, or fats. This can be avoided or maintained by keeping the dog on a low fat diet.
The last main health issue this breed has is hyper-sensitivity to vaccines. To realize if your dog has this, it is advised to keep them whiten your sight and not leave them alone for 24 hours. Usually any reaction will take place within 8 hours, but this may be delayed. This way you immediately get the dog to the vet for further care.
These dogs can have other problems such as liver shunts, epilepsy, skin/allergy problems, heart defects. However, these are uncommon and usually not hereditary(Ykelenstam, Breed Info).

These dogs are described as spirited and playful, loyal and friendly. They are usually clean, intelligent, and easy to train. Being a very vocal animal, the Miniature Schnauzer’s bark is worse than its bite, and this dog favors the former over the later. They are generally good around children, armed with an abundance of energy.

The actual origin of the Miniature Schnauzer is unclear, though it is speculated that the Standard Schnauzer was bred with a smaller terrier.

Over 40-50 million years ago, around the Eocene area, the order Carnivora separated itself. It then divided into two super families, Canoidea and Feloidea. Canoidea includes the dog, Canidae(Simpson et al, 2012). The first dog ever to be domesticated by man was a wolf, and around 10-12,000 years ago Canis Familiaris was domesticated. Different breeds were then created based on the human’s needs.

The Miniature Schnauzer’s cousin, the Schnauzer, originated in the 14th or 15th century in Southern Germany. These dogs were small enough to fit inside travel carts, but large enough to guard them, which is what they were mostly bred for. There was then a need for an even smaller dog to herd sheep or catch rats in a barn, which is why the Miniature Schnauzer was bred. The oldest Schnauzer recorded gave birth in October of 1888. All Miniature Schnauzers can be traced back to this one female.
In the 1920’s the Miniature Schnauzer made its ways to the United States, and was officially given breed recognition in 1926. For the next few decades these dogs served their various roles as work dogs. However, when people became more interested in pets, that’s what the dog was bred for instead. Now this dog works less and plays more, and is often found on the showroom floor.
When presented for judging, one of the most important things is the dog’s looks. There are very specific guidelines that the judges look for in a Miniature Schnauzer. Nails need to be trimmed first, and then the dog needs to be brushed, bathed, and dried. For drying, one needs to brush the beard and eyebrows downward. The legs should be brushed up, and then blown out straight to dry. For fur elsewhere, do not rub it, but gently squeeze out the water. This helps prevent tangling.
The next step is clipping the dog. The blades used depend on the texture and thickness of the coat. The normal blade used is a 10. There is a very precise procedure in which to cut the fur, the most important trimming being the legs and head. The hair needs to be removed from the pads of the feet, and the hair on the leg needs to be combed out. The head then needs to be trimmed to appear in a rectangular shape. The beard should be combed forward and a line from the widest part of the skull needs to be trimmed. 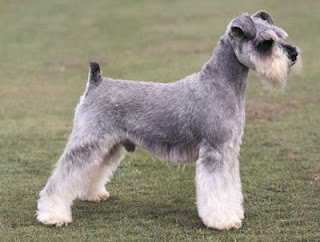 When all this is done properly the Miniature Schnauzer is ready to stand up to the judges. However, there are “faults” which disqualify the dog. One fault is if the dog is under 12 inches or over 14 inches. Another fault is if the jaw is over or undershot. One more fault is if the tail it set too low. And another is if it is all white. All of these and many more are what society has deemed to be imperfect, and it is strongly recommended by the American Kennel Club to not breed dogs that have these faults. They discourage it even further by disqualifying any dogs with these faults in shows(amsc).
And so society has gone from breeding these dogs to hunt with or without their “faults,” to breeding them for show and being unnecessarily picky about creating the perfect show dog. 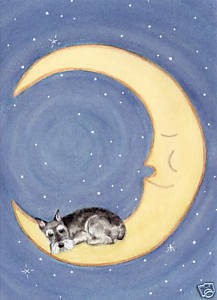 Rest your eyes little one,
The day is almost over.
All that work, and stress,
All that fun and excitement
It’s gone now.

Rest your eyes little one,
Don’t be sad to leave today,
There are new adventures,
to be had tomorrow,
And old ones to leave behind.

Rest your eyes little one,
Your furry little paws,
Your excited little tail,
And your black little nose,
They all need a break, too.

Rest your eyes little one,
Don’t try to fight it,
You’ll never win.
Feel the pillow beneath,
And let the yielding cloth embrace you.

Rest your eyes little one,
The stars are out now,
Dancing around the moon.
They’re waiting for you, little one,
Go to them.

Rest your eyes little one,
Let your bed seduce you,
Let the lull of sleep wash you away,
Let the dreams flow into you,
And let yourself be.

“Bowser is sitting to the left, next to the fence. Winter is barking. Unsure why. Bowser remains seated and looks around. He continues looking this way for a while. After a few minutes he gets up and walks, sniffing the ground along his way. He pauses, looks around, and continues with the sniffing.” That sums up most of my time with Bowser. During the times I watched him he was mostly sitting, staring, and sniffing. He’s a calm dog half of time, or at least he is when he and Winter are alone.
However, there are moments when he shows off his breed’s energy. “His head is jerking slightly. Suddenly gets up and runs, stomping on a leaf. He watches the leaf and continues pawing it. He jumps around, pawing at the leaf. Wind blows leaf, Bowser chases.” He enjoyed that leaf for a long while that day, and even when it was destroyed he couldn’t seem to sit still.
Bowser is very loyal and loving towards his owners. When outside, if he hears a voice he knows, he will stop whatever he is doing, sit,  wag his tail, and move his paws expectantly. However, when presented with unknown noises or sights he will go into a barking frenzy. Needless to say, I had to hide myself while watching him, for when he noticed me he would start barking and jumping. 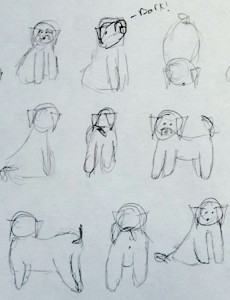 For my animation I decided to focus on a peculiar behavior I often saw when observing him. I have named it his Paw Shuffle. This is where he lifts one paw up, sets it down, lifts the other, and repeats in this little march. Here are some note excerpts of this happening.

“Bowser walks to the left, sits, moves his paws up and down once or twice…paw shuffle.”
“Lifts his paws a little of[f] the ground before putting it back and doing the same with the other. Does this multiple times.”