Wolves currently have moved North, living mostly in Canada and Northern Europe. There are still pockets in other countries such as India, Spain and Italy.

The first time that I stepped onto the observation deck at the wolf enclosure all three were fast asleep. It was at that time I realized that this could be a very long quarter. Luckily things turned around, but it took me awhile to learn to be patient with my observations. As my time observing continued, I was able to observe their pack structure, find ways to tell the trio apart, and watched as they struggled for dominance over each other. Northwest Trek does not name their animals, so I came up with a few things to call them myself.

Black: Or Black Tail. The male of the group, he’s also the largest. He’s the least active of the group, but can be the one who interacts most with elements outside of the pack. He is the one I observed chasing a raven through the enclosure one day, and tends to be curious about ravens and other birds in general.

Black Tip: Or Tip from time to time. She’s the wolf at the bottom of the totem pole. During my last observation she was fighting for dominance over Tan. Of the three wolves, until my last observation, she was the only one I had ever seen look at the humans on the observation deck.

Tan: Or Tan Tail. She’s the one I’ve seen the least of. She’s only ever put Black Tip in her place once, and usually she’s sleeping or pacing around the enclosure. She’s the one I know the least about of the three.

Gray wolves are common in the entire Northern Hemisphere, but mostly in Canada and Northern Europe, mostly in tundras and forests. They can have a territory spanning from 50 to over 1000, depending on the prey and other wolf packs in the area. Though they used to be more expansive, wolves have disappeared in a few places mainly because of the impact that they were suspected to have on cattle and other livestock. (Brett L. Walker, Department of Fish and Wildlife, May 30th <gray-wolf-factsheet-1.pdf>)

The diet of wolves varies drastically. They can, and will, eat things such as leaves, berries, grasses, and other vegetation, as well as meat including elk, deer, and smaller mammals. (Rosamond Gifford Zoo, May 28th <graywolf-2.pdf>, Tukua, Amy, May 27th <wolves-1.pdf>)

The origins of werewolves and lycans are mostly unknown, as many cultures have stories of skin-walkers, or humans who can turn into animals. One of the earlier stories is that of Lycaon, a man of Arcadian legend who was known for fathering many sons. Though there are many different variations of his story, the general theme is that Lycaon or one of his sons tricked Zeus into eating human meat. Outraged, Zeus cursed Lycaon and all of his sons to be wolves for the next 10 years as long as they could refrain from eating human flesh. If they could not achieve this they would remain wolves for the rest of their lives. (Trckova-Flamee, Alena <http://www.pantheon.org/articles/l/lycaon.html>) 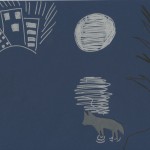 A panel from my puppet animation

He bows his head to the Alpha,
Slowly walking past the divide.
He paces and glances up beneath his brow.
They stare and gasp at this creature of the wood,
Bowing his head,
He turns, turns his back,
And refuses to look.
He slinks behind the bushes,
Sits quietly to himself behind a log,
The old roots reaching through the sky like tentacles.
Here he is safe from prying eyes,
Here neither his Alpha nor the humans can spy him as he sits in peace.

The wolves walk to and fro,
Mostly ignoring me.
But there was a moment, a moment when you looked up,
A moment when our eyes met.
It was only a moment, as you dropped your head,
Slinking off into the dense foliage.
I watch as you pace back and forth,
As you tuck your tail between your legs as the others snap at you.
And yet, at times, you hold your head high,
A beautiful, graceful creature of the forest.

Abyss
Noun. A distance or separation between two things. The Animated Bestiary