I chose this animal because of my affinity for dogs. Wolves can be independent, but usually live with a pack-family. Red Wolves hunt mostly alone or in pairs, although they’ll team up to take down bigger prey. I observed wolves at Point Defiance Zoo. Wilson & Havana are a retired pair from Texas. Millie & Graham are a younger pair that they hope will mate. 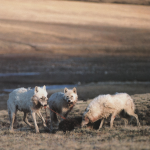 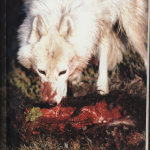 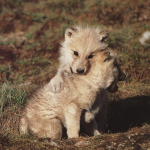 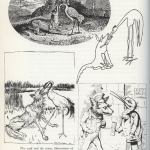 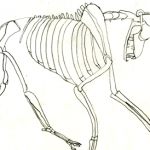 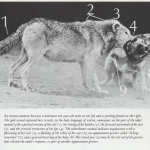 Mech, L D. The Wolf: The Ecology and Behavior of an Endangered Species. 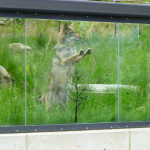 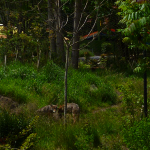 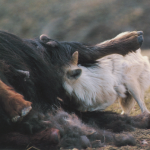 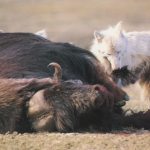 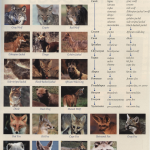 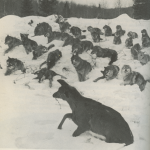 Mech, L D. The Wolf: The Ecology and Behavior of an Endangered Species. Garden City, N.Y: Published for the American Museum of Natural History by the Natural History Press, 1970. Print. 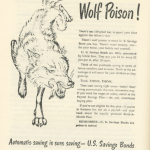 Thiel, Richard P. The Timber Wolf in Wisconsin: The Death and Life of a Majestic Predator. Madison, Wis: University of Wisconsin Press, 1993. Print. 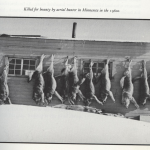 1)   The Red Wolf is the mascot for Indiana University East and Arkansas State University.

3)   The Wolf & the Crane, bone stuck in throat of wolf. Promises reward to an animal that helps.

4)   Serge Prokofiev’s Fairy tale: Peter & the Wolf.  Peter outwits wolf after it ate his bird. Spares hunters from killing it in exchange for a trip to the zoo.

5)   Pacific Northwest Native American tale about a boy named Sheem, who turns into a wolf. Cast out from his family he goes to live with wolves.

6)   In the old English poem: Beowulf, the She-Wolf is Grendel’s mother.

The Red Wolf weighs 45-80 pounds and is 26 inches tall (up to the shoulder) its coloring ranges from dark to light reddish.

Red wolves have long limbs and bushy tails. They range in coloring from dark and light red, tan, white and some black. The males can be slightly bigger than the females. Their skulls are shoe like shaped and their snouts are not as long as dogs.

Scientists speculate the K-9’s first line (creodonts) died out 70 million years ago. Creodonts looked like a cross between bears, weasels and cats. They lived in trees and had air pockets in their ear bones that intensified sounds. Creodonts had flatter mashing teeth and sharper slicing teeth. The hesperocyonines were fox/cat like and died out for unknown reasons. The borophagines-Epicyons were aptly named for they were as large as grizzly bears. They lived off of big game; but when the weather changed, the herd sizes dwindled and they became extinct. The only family that survived the dinosaur era was the canines. They endured due to their diverse diet and would eat anything they could get their paws on. Fast forward to the dire wolf (Canis dirus), which looks very similar to today’s gray wolf; except the dire wolf had bigger teeth, shorter thicker legs, a wider skull and a smaller brain. Meaning it was slower and dumber than a contemporary wolf. Dire wolves died out 10 thousand years ago. Experts believe the red wolf came from a female coyote breeding with a male gray wolf. Another source said red wolves could be directly derived from Canis edwardii from the early Pleistocene epoch, around 1.5-1.8 million years ago.

It’s one huge horse; we have a name in common. His name is my middle name; I’m on a camping vacation with my family in Yosemite National Park. I’m in grade school. At first it’s very scary; why I don’t know. I suppose it’s because this horse is 15 times bigger than I am. Maybe I’m afraid to fall off because I broke my arm falling off the monkey bars recently. It was such a great height to fall from. There’s no way I can get on the horse by myself, so someone has to help me. Then I settle into the saddle and get my stirrups adjusted. A trail guide tells me how to use the reins and that it’s not necessary to kick the horse with my heels. The guide consoles me, all I need to do is to hold on to the reins. He says the horse will take me for a ride; horse knows the trails and traverses them everyday.

We are off down the trail, in single file. The hardest thing is getting used to the violent jostling that the horse makes. It’s also an adjustment when the horses pee or poop on the trail. They don’t even break stride; it’s almost as though they’re not really even aware of what their bodies are doing. They’re completely unashamed and at ease with dropping a deuce in public.

It’s a warm sunny day, my horse does know the trail well, and he’s on cruise control. My fear abates, I don’t have to control the horse much and so I just take in the vistas. From my vantage, I can see the entire valley including the waterfall at the end of the valley and Half Dome. I’ve never been in this part of the Park before. I like the clip-pity-klop sound his hooves make and the way his head bobs up and down with his stride. His tale swooshes to and fro, even though there’s not many flies to swat away. The smell is not ideal, but I like the feel of the horse’s short hair.

9:40 AM It’s a mostly sunny and fairly warm day. The water in man-made brook is babbling some rabble. Havana is drawn to the south end of her pen. I can barely see Wilson because the grass has grown so high. They have 2/3 of the area closed down for the new born pups.

10:32 AM Havana lies in the grass, yet the ruckus of bird activity causes her to raise her head and stand her ears upright.

10:39 AM Havana continues her futile playful dance, as she jumps at some birds. It starts to rain.

10:53 AM Havana trots into the transfer pen and paws at the gate near the ground. I hear a short chirp-like squeal and she emerges with a dead bird in her mouth! She spends the next 10 minutes chewing and tossing it up in the air.

11:02 AM Havana prances and jumps at the dead bird on the ground. She relocates eastward and digs a small hole in the tall grass; she eventually becomes bored with the bird carcass.

11:24 AM Havana returns to the dead bird to fling it into the dry creek bed. She moves it closer to the southern dog house and the holes. Then Havana pushes dirt around with her snout. Then she wanders off to the north looking for more birds to “play” with.

11:35 AM Wilson switches with Havana and digs and chews the dead bird; there’s a moment of awkwardness as he carries it past her. Then shares with her.

11:39 AM Again Wilson & Havana bore of the motionless bird and return to the transfer pen in search of another bird.

The pups are nice; however I hadn’t anticipated them hampering my work. It’s fairly likely that the noisy/obnoxious kids are capturing Havana’s attention. Even with my ipod on I could hear them say the same word over and over 30-50 times…werewolves. Was I that annoying at that age? Irregardless, note to self: research and start saving for a vasectomy fund.

Another first! A person who’s in double digits and can see over the railing mocks the wolves by repeatedly howling at Havana. He compounds his faux pas by bragging to a nearby employee he’s gotten animals. For shame sir, I’m vicariously embarrassed for you! Congrats, sir you’ve upped your game from a D to a C-bag. I don’t even know if Wilson is in the pen. Even though Havana seems to know she won’t catch a bird she seems entertained to try. I’m put in my place after Havana kills a bird today. She plays with the dead bird and is dismayed when it doesn’t play back. She wants it to move or chase it again. There was a moment when (it looked like competitive nature) Havana perked her interest and I thought Wilson and Havana might get into a physical conflict, but whether it’s because they’re mates, captive wolves or both it didn’t escalate into anything. He plays nice and the bird has become their chew toy.

Mech, L D. The Wolf: The Ecology and Behavior of an Endangered Species. Garden City, N.Y: Published for the American Museum of Natural History by the Natural History Press, 1970. Print.

Thiel, Richard P. The Timber Wolf in Wisconsin: The Death and Life of a Majestic Predator. Madison, Wis: University of Wisconsin Press, 1993. Print.