Origin: Although rattus norvegicus translates to “Norwegian rat”, it is a misnomer. They are believed to have originated from central China.

Environment: The Fancy Rat can be found on every continent aside from Antarctica. It is the most successful mammal only second to humans.

Introduction: The Fancy Rat is the typical rat that is sold in pet stores and seen in homes. It is the most common species of pet rat. I decided I would study the rat because it was accessible and also carries a rich history. The rat that I studied was located in The Glen apartments. The rat is female and is named “Rossi”. 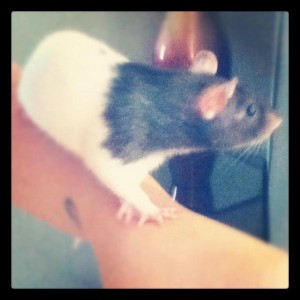 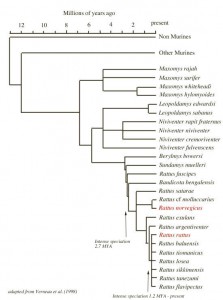 Physical Characteristics of Rattus Norvegicus
The normal body length for an adult Fancy Rat is between nine and 11 inches, with an average body weight, which can range from 450-650 grams for males and 350-450 grams for females. The tail is smooth and its length is seven to nine inches in both males and females. The coat has up to 32 recognized color ranges, which include: amber, cinnamon, lilac, blue, champagne, siamese, mink and a multitude of others, all of which come in one of 10 recognized patterns. The three recognized coat types are: standard (straight haired), the rex (curly haired), and the satin (shiny haired). Some common breeds are those without tails, hairless, odd-eyed (one pink and one brown eye) and dumbo (a breed with large, round ears).

Brief History of Rats and Humans
When humans evolved to be farmers rather than hunter-gatherers, humans learned to store grains and other foods. Naturally, the rats began to adapt and learned that it was much easier to feed from these stored grains. These storage barns also provided good shelter for the rats to breed and live. This began the relationship between humans and rats.

Dispersion of Rattus Norvegicus
Unlike popular belief, brown rats are not indigenous to North America or England. They colonized these countries after finding their way on to trade ships.
After they spread to England in the 18th century they quickly drove out the black rat population (which was indigenous to England) because they are much larger and adaptable. 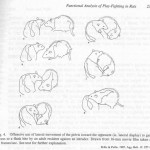 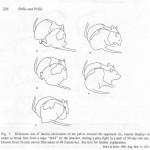 Rattus Norvegicus and Mating
Rats have litters of 6 to 12 young, which are born 21 to 23 days after mating. Young rats reach reproductive maturity in about three months. Breeding is most active in spring and fall. The average female has four to six litters per year. Rats can live for up to 18 months, but most die before they are one year old.

Mating in Females
The female rat’s cycle is divided into several phases: proestrus, which lasts 12 hours, corresponds to the onset of mating behavior, known as behavioral estrus, or heat. The female ovulates at the end of proestrus and thus enters estrus, which lasts 36 hours. After estrus she enters diestrus, a 48 hour period that is subdivided into diestrus I (first 24 hours) and diestrus II (second 24 hours). After diestrus, she enters proestrus again.

During proestrus, or behavioral estrus, the female solicits the male to prompt him into mounting her. She darts toward him and runs or hops away. She may repeat this approach-retreat sequence several times, sometimes wiggling her ears. She may also pause near him or run by him, and may intercept him in his pursuit of another female. 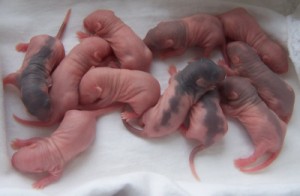 Pit Sport, Jack Black, and Jimmy Shaw
During the Victorian Era in England, the rat population became excessive. This lead to the creation of “rat-baiting” or “pit sport”. Rat “owners” would place their rats in a circular pit along with some breed of terrier. A referee was placed as a time keeper, keeping track of the allotted time given to each dog. The dog who had the quickest time, most rats killed, and rats killed per minute was declared the winner. 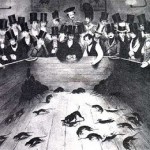 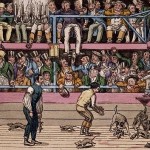 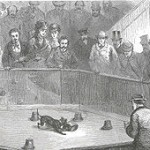 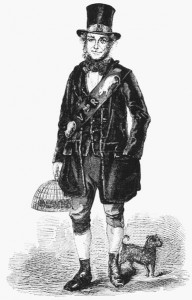 As the sport of rat-baiting began to die down because of the inaction of animal cruelty laws, rats became regarded in high society as a pet of status. Jack Black, the rat catcher to Her Majesty Queen Victoria, was the man to talk to if someone wanted a pet rat. (He is responsible for most of the breeds we see today.) The Fancy Rat became a popular pet for high society women to carry around in squirrel cages or to keep on small leashes. Queen Victoria and Beatrix Potter were two of his customers. 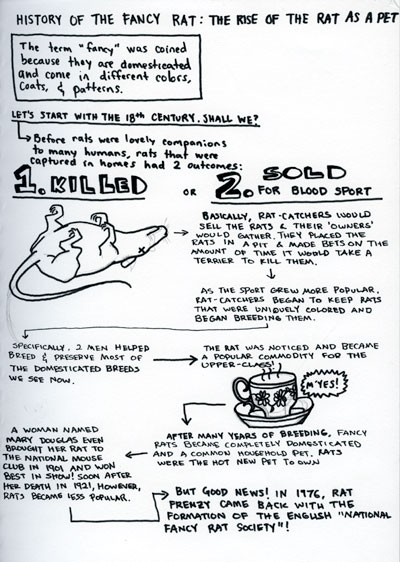 The Rat in the Chinese Zodiac

The story of the rat in the Chinese calendar begins with Cat and Rat. Cat and Rat were inseparable. They played, slept, and shared meals together. One day, the Emperor called for a race between the animals. The Emperor stated that he was making the Chinese calendar and the first 12 animals to cross the finish line would be in it in the order they crossed.
Rat was concerned because they were the 2 smallest animals in the race but Cat reassured Rat that it would be fine because they are cunning. Cat suggested they talk to Ox and ask Ox to wake them up in the morning since he wakes up before every other animal. Ox agreed and the next day Ox woke them up. Cat and Rat jumped on his back and they began their journey.

All the other animals passed Cat who was still in the river. As Cat finally approached the finish line, Cat was told that they came in 13th place and could not be a part of the calendar. Due to Rat’s betrayal of Cat, they still remain enemies to this day. 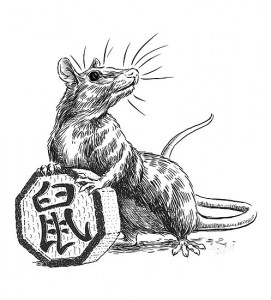 The Rat by Stephanie Smith 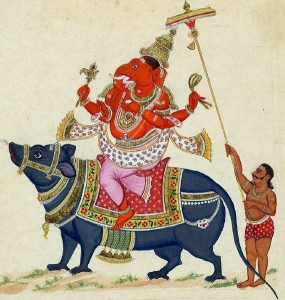 The Legend of Ganesha and Krauncha
Ganesha’s mouse, originally a celestial musician named Krauncha, accidently insulted Muni Vamadeva at Lord Indra’s  darbar and was cursed to become a rat but Krauncha was as big as a mountain and he damaged the Ashram of Sage Parâshara. The sage invoked Ganesha who unleashed his pasha (noose) and it looped round Krauncha’s neck and brought him to Ganesha’s feet. Ganesha decided to take him as his vehicle. But when Ganesha stood on Krauncha he was too heavy and Krauncha cried out with pain. Ganesha took pity on him and made himself light and Krauncha has happily borne Him since.

Karni Mata Temple in Deshnoke
In a city in India called Deshnoke, a temple houses more than 20,000 rats that people travel great distances to pay their respects to. The legend goes that Karni Mata, a mystic matriarch from the 14th century, was an incarnation of Durga, the goddess of power and victory. At some point during her life, the child of one of her clansmen died. She attempted to bring the child back to life, only to be told by Yama, the god of death, that he had already been reincarnated. 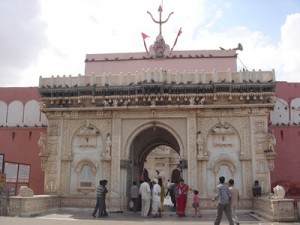 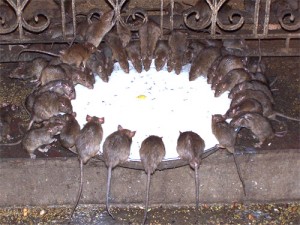 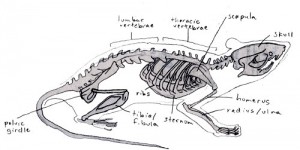 Excerpt from my animal book observations

A little background about Rossi…
I have spent the past few weeks observing the behavior and mannerisms of a certain female Fancy Rat named “Rossi” (short for Rossi Roo). Rossi is known as a Hooded Fancy Rat because of the breed’s coat. The rat as white except for its “hood” which is dark brown and covers all of her head and some of her back. Her tail and her paws are light pink.

Let’s talk about our relationship…
Rossi and my relationship has been tumultuous to say the least. The love is pretty one-sided. Rossi, for some reason, LOVES me but I am not particularly akin to her. I tried my best to distance myself from her – to merely be a fly on the wall. However, with all those lonely hours spent alone with out her human mother, I am guessing I was the person who filled the void. I played temporary mommy.
So I was forced to spend hours with that rat crawling all over me. She climbed in my pockets, down my shirt, in my hair, and once or twice tried to crawl up my pant leg. This rat has NO boundaries. Not only was she incredibly invasive but she must have thought it was hilarious because she peed on me all of the time! 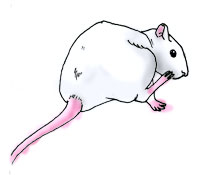 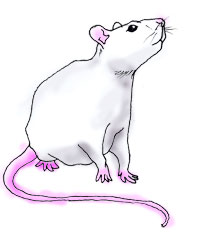 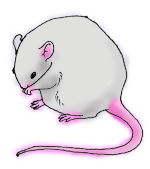 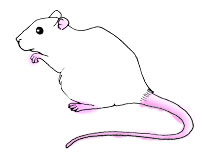 (from my animal book)

Well, I mean I guess I learned a few things…
1. This has only confirmed that I really am capable of hating an animal.
2. If rats were humans, doctors would definitely prescribe them some Adderall.
3. Watching rats get soooo repetitive (eat, sleep, annoy me, eat, sleep, annoy me, poop, an so on)
4. Rossi’s favorite food is mac and cheese
5. Rats love sweaters and by sweaters I mean crawling in your sweater
6. I am probably allergic to rats

With that being said, I leave with you a pretty dark poem about rats followed by my not-so-serious animation to pick you up from your depressed stupor.