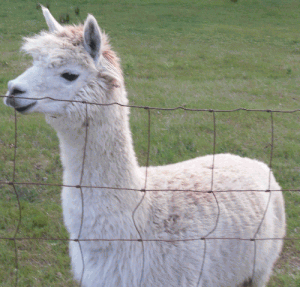 A picture that I took of Tino the alpaca

When I moved into my new home in November 2011, I noticed a creature across the street from my house watching me. I assumed that it was a llama, but soon came to learn that the big, gleaming, dark eyes that observed me belonged to an Alpaca.  Alpacas are a small, domesticated breed of camelid. They look similar to llamas, but are smaller. Originally alpacas were thought to share the same Genus (Lama) as llamas, but recent studies have shown that alpacas actually originated from the Vicugna Genus.

When it came time to choose an animal for this program, I decided on the neighboring alpaca. I though it would be an excellent opportunity to learn more about the species and also a good way to connect with my (human) neighbors!

The alpaca that I have been observing is named Tino. He lives across the street from my house in a large fenced field with one other alpaca and two sheep. The other three animals often follow Tino around. Tino is easy to distinguish from the alpaca because his coloring is very light off-white, and the other alpaca is brown. Tino also displays a much stronger personality and appears to be much more alert and interested in the world that surrounds him. 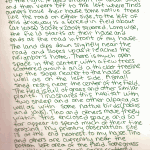 – I observed Tino primarily from a ditch across the street from my house, very near the fence enclosing his environment. I also observed Tino from my front yard, and when it was pouring rain – through my living room window.
– The image to the right describes Tino’s habitat in depth –> 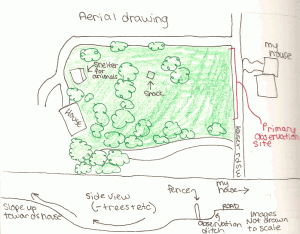 <— A Drawing of Tino’s habitat

The guanaco and vicugna diverged from a common ancestor around two million years ago.

All four of the South American camelid species are able to reproduce with each other, and the offspring are even fertile. 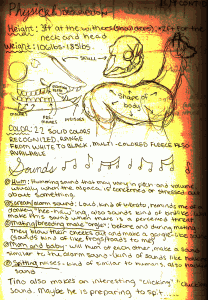 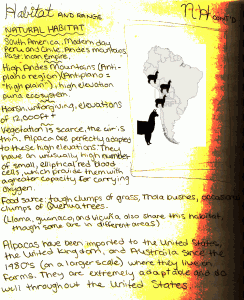 Domestication of alpacas (and llamas) has been dated at 6000-7000 years ago in the Peruvian Andes. Unlike many other farm animals, there is no written history associated with the alpaca Orally transmitted herding knowledge was largely lost during the Spanish conquest (1500’s), and breeds disappeared as both the human and the native domestic livestock population were reduced.

The domestic alpaca is bred for fiber, while the llama has generally been regarded as a pack animal and played an important role in the rapid expansion and success of the short-lived incan empire. At high altitudes where farming becomes difficult and the vegetation has low nutritional value, the domestic alpacas and llamas were an invaluable source of meat

Alpacas were exported from Peru in the mid-1980s and have become a premier livestock in North America and Europe. They are still primarily used for their fiber, but also are entered into shows for conformation and fiber quality.

Columbian Inca ritual offering vessel Conopa in the shape of an Alpaca. Hand carved of a black fine grained stone, then polished with sand and water, with a hole in its back called a “qocha” (lagoon)-the container for offerings during the ceremony “haywarisqa” (ceremony of offerings) in which Alpaca fat and blood mixed with coca leaves were presented to the gods. 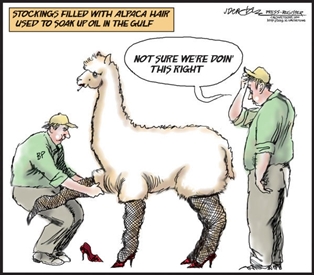 “The Alpaca Breeders of America have found another great use for their fiber in a rapidly growing textile industry. High grade fiber which is used for felted mats and landscape products are being diverted to the Gulf Oil Spill crisis. Shearing season is in full force and both llama and alpaca breeders are answering the call.”

Emperor’s New Groove – Metamorphosis
(Not an alpaca, a llama..but still relevant)
http://www.youtube.com/watch?v=t_YjSbp5KHM
A selfish human emperor wakes up to find that he has been transformed into a Llama.. chaos and hilarity ensue.

Many colors and a variety of hair styles.. ooh la la~! 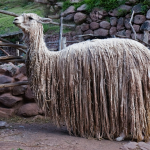 Description: Suri alpaca. Stands with heavy strands of fleece, braided. Off-white in color. The background is a wall of rocks, green pasture off to the left. Fence made of sticks.
Reflective Writing: Heavy hair, flat back, weighed down. Ears laid back, listening or weary. Looks old, wise. 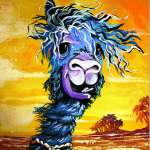 Description: Blue alpaca, wearing shell necklace. Goofy cartoon type drawing, alpaca smiling. Tropical place made of warm colors
Reflective Writing: He is a cool blue in a world of soft yellows and orange. He wears a necklace and smiles, his hair is wild. He is carefree. There’s wind. He’s the color that the waves should be. Is he part human? 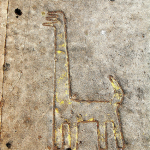 Description: Light gray wall, smooth, with alpaca etched on, ancient
Reflective Writing: Tail lifted, neck straight, alert to danger? Anger? Food? His head has three prongs, like a fork. Perhaps two are ears. Perhaps one is an ear and the other two are an open mouth. Rectangles. 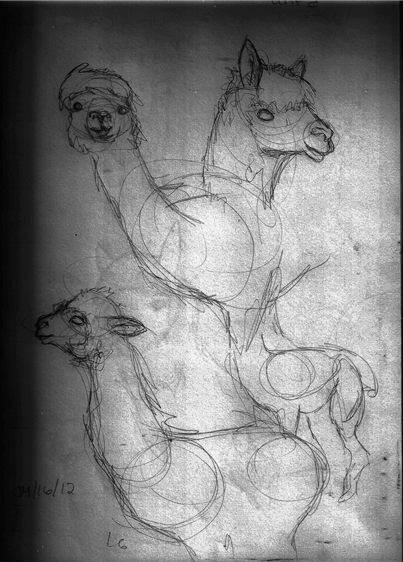 The image to the left contains drawings from my observation session on April 16th, 2012. There are several pages of drawings from this day, but these are my favorite. Tino was very close to my observation camp and he kept watching at me. I tried to be quiet and still, invisible. Eventually he’d go back to his business, grazing. He eats constantly! The moment I moved or made any sound, however, his ears would perk up and he’d look directly at me.

It’s my birthday. It’s probably around 6pm, I didn’t bring my phone out with me to keep track of time. The sun is beginning to set. It was a warm, partly cloudy day. I’m across the street from Tino, in my front yard sitting on a very comfortable love seat that we’re waiting for people to come pick up. Tino is very near the fence line closest to my house, grazing. His head moves back and forth jerkily as he rips grass and other plants out of the ground with his front teeth. He keeps perking his ears up and lifting his neck to look off to the right. The enclosed pasture to the right of his was recently filled with a herd of very dainty-looking, slender, shiny horses. They keep running around and come very near to the fence closest to Tino. He is looking at them. His ears twitch. So does his tail. My family is arriving in small batches, and Tino watches my house as new vehicles arise. I don’t know if it’s appropriate to observe him right now, because my family being here seems to..alter his world. But, being a neighbor, and going about my daily life.. well, that does seem like something normal for Tino to experience. My 5-year-old cousin (female) and my 15-year-old cousin (male) go to see Tino and the sheep. Tino and his three companions are all near the fence closest to me and are watching my cousins. They go up to the animals and talk to them, pet them. The boy talks to Tino, pets him, makes kissy faces at him. Tino seems to purse his lips and makes what appears to be a “kissy” face back at my cousin. Tino then draws his lips back away from his teeth, makes some interesting “chucking” noises, and then spits in my cousin’s face. My cousin yells and staggers away from Tino. There is saliva and grass on his face. Tino shifts his feet, his ears twitch and lay back. The girl feeds him an apple she got out of their vehicle. Tino eats the apple. One of the sheep has stuck its head through the fence squares and appears to be stuck. It’s probably been about 20 minutes total. They help the sheep get his head out of the fence. Tino stays close to the fence, watching all of us. The other alpaca hangs back, about 10 feet away from the fence. He doesn’t seem to like to be around people as much. I wonder what Tino thinks of the five-year-old. He looks at her more than others. She bounces around and makes many high pitched sounds. It’s time to do other things now, but this was an interesting session. It was fun to see  Tino interact with humans, and though it was horrible for my cousin to get spat on, it was pretty hilarious. I wonder if Tino thinks it was funny too. Do animals experience humor? I saw a video of a penguin laughing once as someone tickled it. Maybe Tino is laughing in his head. 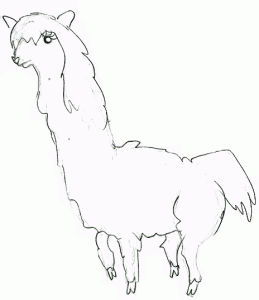 One of the character designs I created was a “Self-image” as an alpaca. In the image to the right, I first began to add “myself” to the alpaca. I gave it long eyelashes, producing a more feminine look because I consider myself to be pretty feminine. I applied a heart-shaped nose because I personally love hearts, and just LOVE in general. The symbolism related to the heart symbol resonates strongly with who I am. The lengthy hair and “bangs” are also features that I possess.

This is an image of my alpaca self gazing up at the stars, laying flat on her back – as a human would, not a “pure” alpaca. 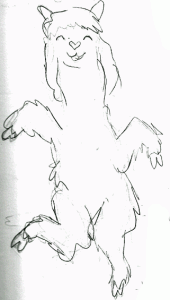 The image to the right is a drawing of my alpaca-self dancing. Unlike a “pure” alpaca, my alpaca self prefers to dance while standing on her two hind legs and flailing her arms about. In the drawing, I did do my best to have the limbs bend in all of the proper directions, which I feel actually added much more movement to the picture. Again, you can see the long hair and the heart-shaped nose. The expression also displays the happiness one (or maybe just me) experiences while dancing!

This is an animation I created of an alpaca lifting its leg to scratch itself. The alpaca is an articulated paper puppet attached with string and tape. It was challenging to move pieces of the puppet without the whole thing moving, but I managed to accomplish it! I think it’s really interesting how alpacas use their hind feet to scratch multiple places on their bodies. I really enjoyed the “The End” segment of this animation and beyond. That portion of the video was made on the fly using cut pieces of construction paper.

Naked human, clothed in the furs and fibers of others.
You wear your own coat, even in this damp morning.
Heavy as a sponge with every pore dripping water droplets.
Yet you stand uncovered,
unprotected from the tears of the sky.
You probably don’t know it as “sky.”

You are something natural, pure.
Well, as pure as you can be with humans around.
You graze at your grasses, shifting feet,
tearing plants with flat teeth,
lifting your head to gaze at the world while you chew.
You don’t need us or our shit to know what you can do.

I am a product. Manufactured.
Our world is processed, full of plastics.
Synthetic.
We do not go grazing in fields, naked.
We are in walls, containers full of everything fake.
All we do is take.

Our lives so complicated,
We have to spend years in closed rooms
just to learn how to survive in the mess
that we’ve created for ourselves
and even then, not everyone will succeed.
You probably know nothing of our greed.

We’re no longer even animals.
Or maybe we are the only animals.

You stand out there,
milling about,
filling your belly with greens,
not complicating anything.
But our world is complications,
Pureness we have lost almost in entirety.
So many words, labels, rules, devices, technology.
I sit here dressed in your brother’s wool,
on concrete, beside plastic, below steel,
Mind racing, thoughts everywhere on everything.
And I feel it is you that is free.
Something that humans will never be.