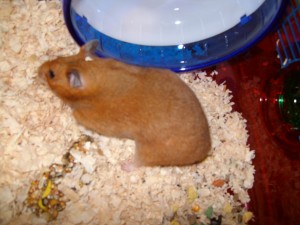 I have always had hamsters growing up and I have watched their individual personalities emerge as I spent time with them. I have also seen their wild characteristics appear, but I have not seen how a different owner would change their personalities. I was there when Katie got her Syrian hamster, Honey, but I never saw how she has grown in the last year since then. I am very interested to see how she may have changed from the timid little pup (baby hamster) I knew her as when she was first adopted from the pet store.

What is a Syrian Hamster? 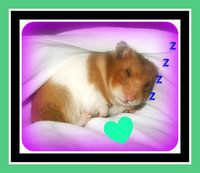 The Syrian Hamster is the most common and is the largest of the 20 species of hamsters. They are part of the rodent family which takes up 40% of the mammalian orders. Some Syrian hamsters have been recorded to grow to 30cm long, even though the average size comes to about 20cm. Like the name says, the Syrian or Golden Hamster is mostly gold in color with a white underbelly. Since it’s mostly nocturnal, they have large black eyes to help them navigate through the dark. It has two front feet that are shaped more like hands that it uses to hold and forage for food. The hind feet are larger and are used for balance and support when standing on its hind legs to observe its surroundings. They are also very adorable which made them popular pets.

Animal town. Hamster-animal town. Where does the Hamster live, What does a Hamster eat, What is Special about the Hamster. 2009. Web. May 19, 2012.http://www.animalstown.com/animals/h/hamster/hamster.html 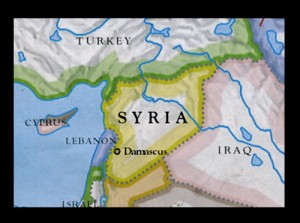 Originating from Syria, the Syrian Hamster (aka Golden Hamster) was named by British Zoologist George Robert Waterhouse in 1839. Coming from Syria, their natural habitat is the sandy desert. Even though these little guys were named in 1839, the first recording was made in 1797 in the Natural History of Aleppo, published by Alexander Russell. A zoologist named Israel Aharowl, by the request of researcher Saul Alder, caught a litter of 11 baby hamsters and their mother and other hamsters. During this time, the Syrian Hamster almost became extinct. The mother was killed after eating one of her babies and others escaped, later to be found dead. Only 4 remained that lived to adulthood and were later bred with no complications.  All captive hamsters are decedents of the surviving offspring.

Family Tree of the Syrian Hamster 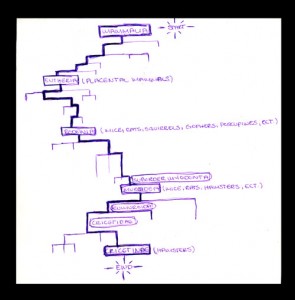 Syrians in the Wild 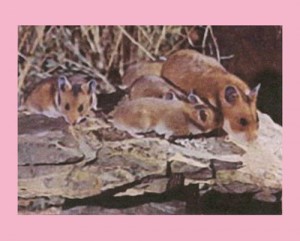 As mentioned before, the Syrian hamster originated from the deserts of Syria, east of Asia. In the wild, this small creature spends most of its time digging tunnels and foraging for food. Using the massive pouches in its cheeks, this animal stores its natural foods including nuts, seeds, vegetables, grass, fruits and berries, and carries it to its underground den. Being nocturnal, they will come out of their dens when the temperature is cooler and is much easier to avoid the many predators that hunt them. Even though the underground tunnels will contain many chambers, each chamber only houses one hamster because they are solitary creatures.

Animal town. Hamster-animal town. Where does the Hamster live, What does a Hamster eat, What is Special about the Hamster. 2009. Web. May 19, 2012.http://www.animalstown.com/animals/h/hamster/hamster.html

All hamsters in captivity are decedents of the litter that were captured by Israel Aharowl. Because of their docile temperament, they are popular as pets. Even though some people commonly mistake these little guys as the perfect beginner pet for children, the American Society for the Prevention of Cruelty to Animals recommends the child be at least 10 years old and should always be supervised by an adult when handling a hamster. The main thing to remember is that when it comes to choosing a cage, there is no such thing as the cage being “too big”. Hamsters have a lot of energy and needs tons of space to play and exercise, but should also be as safe as possible. Hamsters are natural escape artists so it’s important to remember to securely close the cage when you’re done playing with you’re hamster. Here’s an important check list if you plan on adopting a hamster: 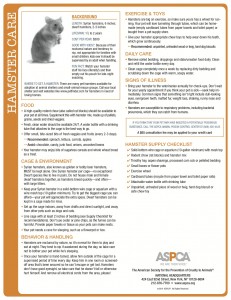 Provided by the ASPCA

Hamsters in the Laboratory 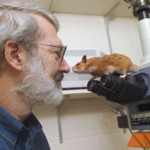 Rodents are the most used animal in scientific research, and that includes hamsters. Because of their extreme running on their wheels, they are popular candidates for circadian rhythms research. Also because of their behaviors with scent marking and body grooming they are also used in the study of animal behavior (ethology).  The biggest use for hamsters is in the study of biomedical research. Because of over breeding and inbreeding issues, they have developed several health issues such as heart defects causing dilated cardiomyopathy. Other than for medical purposes, scientific research also helped us learn what kind of bedding hamsters prefer, what kind of food they eat and what their living situation is. Even though they were kept in cruel confinement in the labs in the past, thanks to the intervention of the ASPCA, there are now certain laws in effect that regulate how to properly care for laboratory use animals. 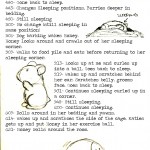 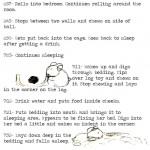 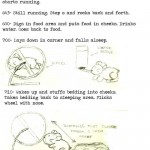 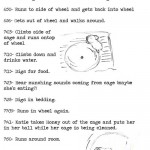 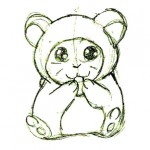 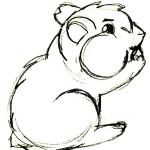 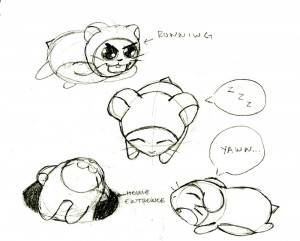 Hamsters in the Culture 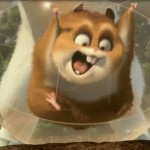 Rhino the Hamster from Movie Bolt by Teaser-trailer

Rhino first made his appearance in Disney’s movie Bolt. Bolt  is about a superhero dog that stars in his own  T.V. show. He believes everything in the show to be real until one day he get separated from his owner, and fellow T.V. star, Penny. Rhino is a T.V. addict that mainly spent his time in an RV park watching T.V. Bolt was his favorite show and his dream of meeting his hero came true when Bolt showed up at his front door on his way to be reunited with his owner. 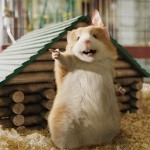 Bucky the Hamster by Steve Buscemi

Bucky is another hamster in Disney’s movie, G-Force. G-Force is about a team of specially trained secret agent guinea pigs that takes on a mission to save the world that is threatened by villain who plans on taking over the world with household appliances. Bucky only plays a minor role as a pet store hamster that meets G-Force. He is kind of crazy and anti-social (like most hamsters), but he is also “part ferret”, which may have something to do with his strange behavior. 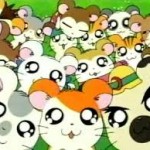 The HamHam gang are the main cast in the popular children’s anime, Hamtaro. These mischievous little hamsters escape from their cages on a daily basis when their owners are out of the room and has many fun adventures. The HamHam gang’s adventures includes outsmarting cats, to helping Hamtaro’s (the orange and white hamster in the front) owner, Laura, plus tons more. 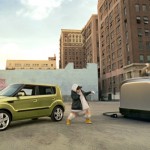 Kia Soul Hamsters are up to it Again: Car Commercial of the Week by Cory Mack

For some unknown reason, hamsters were used in the Kia Soul Car commercials. I personally believe it’s because hamsters are so darn cute, but that cuteness is somewhat taken away with them dressed as hiphopper gangsters and doing the “hamster shuffle” as I call it. I admit it is kind of funny, but this commercial makes little sense to me.

Hamsters also made quite an impression when they were made into many fun toys such as the ZhuZhu pets. Like with the real hamster, kids can watch these hamsters run around on a hamster track and also build random parks for them to play on. Hamsters also became popular fun-sized erasers that originally started 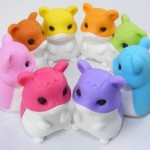 in Japan. But recently, they came over to the America where they became a big hit with anime fans ( I have a few myself). They also come in many other forms such as food products and other animals, but the hamsters remain to be the most popular for their kawaii (cute) appearance. You can see the whole selection, along with other cute things, at www.thingswitheyes.com. 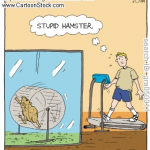 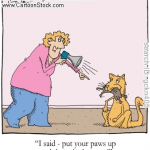 “I really love my job, but juggling strange hours with two children is a bit like being a hamster on a wheel. A very tired hamster.”

“I love running cross country….On a track, I feel like a hamster.”

“I don’t wanna talk to you no more, you empty headed animal food trough wiper! I fart in your general direction! You mother was a hamster and your father smelt of elderberries!”

“Cigarettes are a lot like hamsters. Perfectly harmless, until you put one in your mouth and light it on fire.” 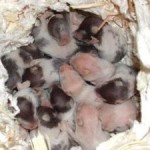 Some with coats of cream. Most with black and white. So alike in appearance, But also so different.

But can you tell who I really am? Am I one of a kind? Or am I just one out of many?

There are so many, but I am alone. No one can tell…just how lonely I am

Animal town. Hamster-animal town. Where does the Hamster live, What does a Hamster eat, What is Special about the Hamster. 2009. Web. May 19, 2012. http://www.animalstown.com/animals/h/hamster/hamster.html