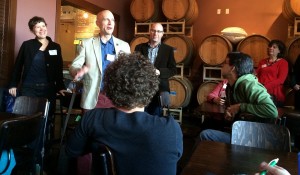 Over thirty alumni and friends gathered on Wednesday night after work at Three Magnets Brewing Company for the first installment of the Big Idea event series. Representing the classes of 1974, 2015, and every class in between, a lively crowd gathered on the month’s third Wednesday for April’s Big Idea. 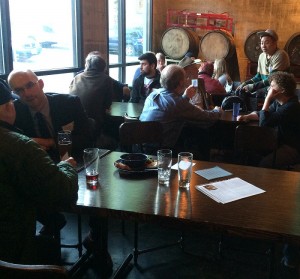 Faculty members Greg Mullins, Shaw Osha and Trevor Speller started the conversation with a short talk, which was inspired by their team-taught program, It’s About Time. They shared reflections on how technology has revolutionized our relation to time, including anecdotes and readings from their experiences asking their students to unplug from the internet, use typewriters rather than computers, and approach art and literature SLOWLY. After their thought- and laughter-provoking talk, everyone truly was talking about time.

We hope alumni and friends will join us for the next Big Idea, a talk by Evergreen faculty Nancy Koppelman ’88, inspired by her program What Are Children For?.

Did you attend? Or wish you had? Join the conversation by commenting below.

4 thoughts on “It’s About Time: Big Idea event series kicks off at Three Magnets in Olympia”