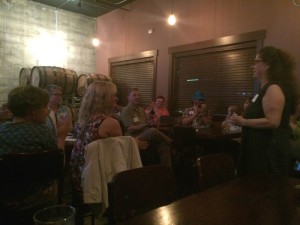 “What Are Families For?” That’s the question that sparked May’s Big Idea, which brought together an exciting combination of thoughtful minds, relevant conversation, and good food and drinks together for a truly memorable and fun evening at Three Magnets Brewing Company in downtown Olympia. The star of the evening was faculty guest speaker Nancy Koppelman ’88, who had a lively crowd of Greeners alternating between laughter, asking questions and examining assumptions for upwards of an hour after a relaxed social hour in the restaurant’s Barrel Room. Once guests had drinks in hand, food ordered, friends made, and old friends greeted, we slid the rustic sliding doors closed and initiated a conversation that unquestionably had everyone’s full attention. 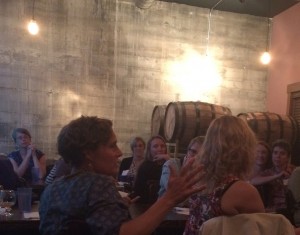 Nancy charted an exploration of social history, including her own journey and experiences, as well as those of her students in her program, with the same name as the talk. She begged questions that all parents ask but often can’t answer, namely, “am I doing it right?”.

There were some very special guests with us.

There were many other notable guests, but suffice it to say, the Big Idea event series is proving to be more than just a chance to hear from faculty. They are also valuable networking opportunities, and a time to have fun! 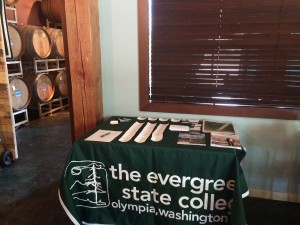 We’ll be at Three Magnets on the third Wednesday of June. Join us!

We hope you will will join us for the next Big Idea, a talk by Evergreen faculty members Drew Buchman ’77 and Marla Elliott, on the history of independent music and performance s in Olympia and at Evergreen. Preparation bonus – pick up a copy of Sub Pop USA by Bruce Pavitt ’81, the founder of Sub Pop Records.

Did you attend? Or wish you had? Join the conversation by commenting below.