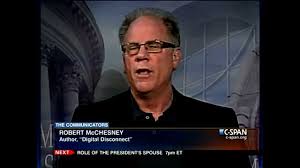 Robert McChesney ’77, author of numerous books on media and democracy

Evergreen’s own Robert McChesney and co-author John Nichols will make three stops in the Pacific Northwest to speak about their new book, “Dollarocracy: How the Money, and Media Election Complex is Destroying America.”

McChesney aficionados know Bob is one of the most widely read and honored communication scholars in the world today. Outspoken public figures always have detractors of course and, among other criticisms, Bob has been labeled one of the “101 most dangerous college professors in America.” Come judge for yourself. Here is the schedule:

Praise for Dollarocracy:
“The billionaires are buying our media and our elections. They’re spinning our democracy into a dollarocracy. John Nichols and Bob McChesney expose the culprits who steered America into the quagmire of big money and provide us with the tools to free ourselves and our republic from the corporate kleptocrats.”
(Lisa Graves, Executive Director, Center for Media and Democracy)

About Robert W. McChesney
One of the first generation Evergreen graduates, Dr. McChesney is the Gutgsell Endowed Professor in the Department of Communication at the University of Illinois at Urbana-Champaign and the author or editor of 23 books. His work has been translated into 30 languages and he is the co-founder of Free Press, a national media reform organization. In 2008, the Utne Reader listed Dr. McChesney among their “50 visionaries who are changing the world.”

About the series
The Ernestine Kimbro Authors and Artists Series provides a forum for members of the Evergreen community to publically share their creative work. Sponsored by Library & Media Services, the Office of Alumni Programs and the Provost’s office, the series carries forward a tradition that Ernestine, who worked at Evergreen in different capacities for many years until her death in 2009, masterminded and kept alive even in her final weeks at the College.

One thought on “Robert McChesney ’77 on Tour with New Book: “Dollarocracy””