Introduction: I have often passed by the American crow without so much of a single glance in the Birds direction. After researching the Crow and observing it first hand I have found the Crow to be very interesting and misunderstood. Though I was never able to observe an individual crow I have found that they are very social birds.

Inspiration hit me when I looked back on my childhood, I can remember bits and pieces of memorable situations involving the Crow. For instance being woken up at 5 a.m. every morning by crows having a hay day over left out camp food. After looking over my memories I considered the fact that I really don’t know anything about the Crow besides it’s a black bird and makes a cawing sound.

The Crow was founded by Alfred Breham in 1882 after a beak study between Crows and Ravens. The scientific name for the Crow was made up by two latin words: Brachys meaning “short,” and rhynochos meaning “bill.” Evolutionary wise it seems that the American Crow seems to have originally came from the Asian Crow.

Most if not all Corvids have a structurally large head in proportion to their bodies, insinuating that they have large brains. The larger cousins of the Corvids such as the American Crow and Raven “walk” instead of “hop” and can fly up to 30 to 60 miles an hour, and can sustain a high speed of 70 mph when in a dive! 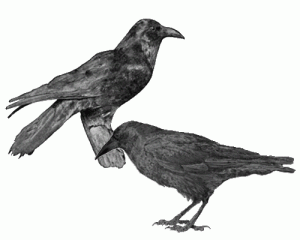 The Crow can live up to 14 to 24 years in the wild, assuming they don’t run into trouble with natural predators such as the Red tailed hawk and the Raccoon which are common creatures for feeding off of young crows and eggs.

The American Crow in particular has rounded wings and a square but rounded tail. Its beak is smaller than its larger relative the Raven and doesn’t have a distinctive “forehead.” 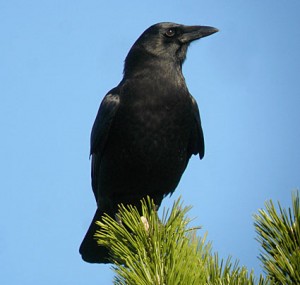 Coloration is mainly if not always black for the American Crow, other relatives have white markings. Beaks and talons are all black along with dark eyes and feathers.

Nests are about 6 to 19 inches in diameter with a 6 to 14 inch inner cup and is about 4 to 15 inches deep depending on location and individual bird. 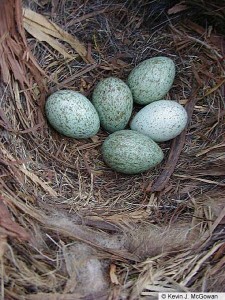 Crows have up to 3 to 9 eggs in one clutch, the incubation period lasting up to 18 days, and the nestling period can last between 20 to 40 days.

Socially Crows are much like humans, when it comes to leaving the nest yearlings will stay behind and help with the hatchlings. They will help their parents feed them and protect them at the sight of predators. This choice to stay with the parents is very beneficial to the young Crows. Here they learn social aspects and resourceful ways of living. Which include food sources, “allo-preening” behavior, working together against enemies, and other social living behaviors. *allowing their species to thrive and survive.*

The Crow’s food supply expands in a variety of different eating habits, the Crow is an Omnivore meaning it eats both meat and vegetation. The crows meal includes grans, seeds, berries, fruit, small animals and insects. The crow also eats small fish, mussels, clams and other birds eggs along with human leftovers.

The American crow lives in several different types of habitats which include; farmlands and fields, open forests, parklands, and human settlements. Their range of migration is up to 1740 miles in one direction and they mainly thrive between Southern Canada and Northern Mexico.

Crows are known for their Caw-Caw calls, but did you know the Crow has over 30 different calls? The Crow in particular has a very distinct nasal sound when it calls which is useful for individual recognition. Each call represents a formal warning for social bonding, predators, food, or the death of another.

Courtship rituals are very interesting as well, both Male and Female participate in a bowing of the body, wings out and drooped, and a constant flicker of the tail. But what makes this so interesting is that only the Females do the display every time, whereas the Males may not. Vocal calls are apart of the ritual, the Female will make soft ka-coo sounds that will slowly get louder. Another interesting aspect to the ritual is that the Male isn’t always the one to mount the Female, it has been recorded that the Female may mount the Male instead.

The crow has often been seen for its dark coloration as a sign of death or trickery, but often tell of other tales in order to teach a lesson. For example in the children’s story the Fox and the Crow…

A fox once saw a Crow fly off with a piece of  cheese in its beak and settle on a branch of a tree. “That’s for me, as I am a fox,” the fox says and walks up to the foot of the tree. 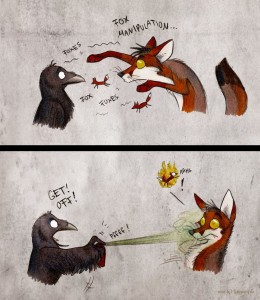 “Good Day, Mistress Crow,” he cried. “How well are you looking today: how glossy your feathers; how bright your eye. I feel sure your voice must surpass the that of other birds, just as your figure does; let me hear one song from you that I may greet you as the Queen of Birds.”

The Crow lifted up her head and began to caw her best, but the moment she opened her mouth the piece of cheese fell to the ground only to be snapped up by the fox. “That will do,” the fox said. “That’s all I wanted. In exchange for the cheese I give you a piece of advice: Dont trust flatterers.”

The Crow here was manipulated by the fox, but has reappeared in Culpeo-fox’s “Fox manipulation” taking the foxes advice and not allowing the fox to manipulate her further.

The Crow was once considered a pest, or “vermin” in Europe during the 1700’s. Crow roosts were so massive that Crows became a source of Game. When Crows moved over to the North American states they too became a problem. Settlers found the Crows call to be annoying, and the fear of disease raged a war on the Crow. By the 1930’s crows were fair game and were bombed by dynamite which killed up to 26,000 crows in a roost. Now a days the Crow is still plentiful and killed for fun.

The Scare crow, was a technique used as a way to keep the Crow from getting into farmers crops, seeing as Crows will live off of anything they can. Until that is, the Crow learned that these fake humans were merely stuffed with hay. Farmers then had to learn of a new technique which would keep their feathered neighbors out of thier crops. One way was the use of Dead crow bodies that would be tied to Farmer’s Fences, a small warning to the Crows that this is a dangerous place. Another, more modern way of going about scaring crows is an “air gun” that sends out a loud blast, enough to scare any Bird away.

Its often a cultural outlook that the crow is a representation of death. Through out my research of cultural thoughts on Crows I have found that many believe in their spiritual connection with Death. It is thought that the Crow carries souls to the land of the Dead. And maybe this correlation is from the Crows scavenging style that allows it to eat anything it can find, including dead human flesh. 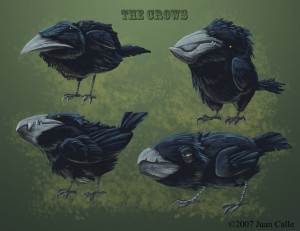 I found this particular interesting to  the thought of death. When something is close to death in a creepy or cultural way, the something is found to be scary or tough looking. This Particular image of the Crows made me smile.

The Crow is still greatly appreciated today by many other cultures including a Seattle band of homeless people, “Tribe of Crow,” that take pride in their connections with the urban bird. When it came to Creating my character Hobo Joe the American Crow I had thought about the connections of Crows and the Homeless. How society can see them as pests, yet they are just merely people that are learning to survive in a harsh environment.

During my observations of the Crow I found several fun and interesting facts that I had read about. One being how Crows will work together to dive bomb Red hawks or other birds of prey. 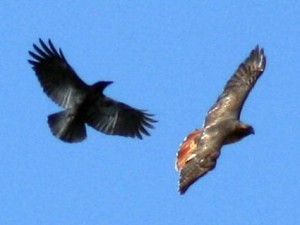 While I was sitting in a field located in Centralia Washington farming land I found my eye drawn to a passing crow. As I watched I found it moving in on a Red tailed hawk that had moved to close to the Crow’s nesting tree. As I watched I noticed that there were three Crows going after the hawk, flying high up then diving down at the Hawk’s wings. Just then I see a black dot out of the corner of my eye, and there came another crow to join in on the invasion, then another! By the time the Crows and Hawk had moved out of sight I counted 9 different Crows attacking this one Hawk! Now thats team work!!!

In addition to this concept of cooperative attack, when any creature, especially raccoons, come within 15 feet of the nesting tree and are considered a threat will be attacked by a group of crows. Though, I didn’t get to experience this…

I also found out some interesting facts about how smart the Crow actually is. Crows when living along side humans will use them to their advantage. For example, the Crow will hover above a busy street and drop a nut onto the black top and wait for a car to run over and crack the shell before the Crow dips down and eats the insides.

Though I don’t think this was intentional I did happen to see this behavior.

A crow was flying over head by North Thurston High School, the Crow had something in it’s talons and was flying over a road up high when suddenly, it lost the item. In a freakout the crow frantically redirected itself and dove toward the road but pulled up before it got too close to the ground.

Just then I watch a car run over the item that had fallen and the Crow was out of sight. It wasn’t long before another crow, or the same one flew into the road and retrieved pieces of the broken fallen item.