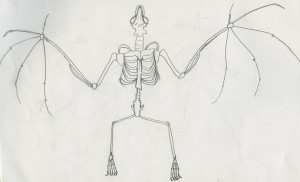 Bats have been around for over 50 million years!!!!!!! They aren’t so different from us humans although they’re much older. They are warm-blooded mammals that give birth to underdeveloped young that nurse from the breast (yum yeah) just like us AND we both come from a common ancestor, but as we both evolved, us humans stayed on solid ground while the bats TOOK TO THE SKY**** (Peterson, Russell Francis)

Bats are the primary predators of night-flying bugs. Little Brown Bats are consumers of mostly mosquitos (damn skeeterzzzzz!). These bats may consume nearly 50% of their body weight in bugs nightly. (Shedd, Warner)

Bats CAN see, despite the expression “blind as a bat”, but they rely on echolocation. In flight they emit high frequency sound pulses above the range of human hearing. (Shedd, Warner)

I stand 5 and a half feet tall
Under there Red Cedars
The wasteland steaming like a bog
Rising heat from the ever-mating frogs
Its witch’s night
And as abuela always said
Brujas bring bats
But I’m not scared
I walk into the woods
With just red light
I stand in the dark
And just as promised
A bat whooshes
Almost grazing my face
Brown
Soft
Darting
Like a tongue
Where’s the witch?
She stands in the dark
Under the Red Cedars

∞ = Victoria British Colombia: Some tribes see the bat as “Man’s brother” as well as a sexual totem. Hunters won’t kill them since it is unlucky. This is because the bat is associated with the ghost.
§ = Guatemala: The Mayan Bat god is Camazotz and was very dreaded by the people.
∑ = Mississippi: If you wear a heart cut from a live bat tied to your right wrist, hidden from sight, it brings luck in gambling.
† = Ireland: The bat is a symbol of death. A bat coming into the household is also an indicator of coming death in India, Alabama and Salzburg.
◊ = Ivory Coast: There’s and island inhabited by many large bats, which are sacred to the natives since they embody the souls of the dead. (Leach, Maria, and Jerome Fried)
∆ = France: The Bat is thought to bring disease. A story is told of a French doctor who cured his patient (suffering from Melancholia) by making a small incision and the releasing a bat he had been holding in a bag. A woman in 14th century France was burned as a witch just for having an abundance of bats around her home. Bats are widely believed to be spirit helpers or animal forms of witches known as “familiars”. (Shedd, Warner)
¿ = Sicily: The devil often takes the form of the bat. Some people in Sicily sing a song to the bat and then either burn it or hang it up.
Ω = China: Bats signify long life and happiness. Their symbol of the 5 bats indicates the 5 blessings: health, wealth, love of virtue, old age, and a natural death. It is believed that long life and excellent eyesight are a result of eating bat. The bat is considered a good omen in China. (Leach, Maria, and Jerome Fried) 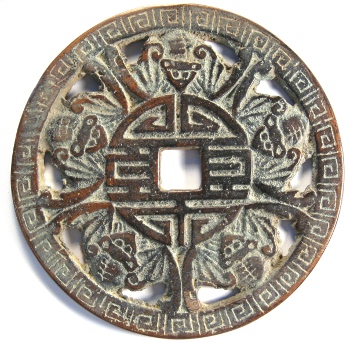 chinese symbol of the 5 bats 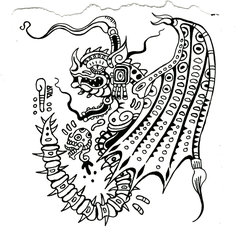 I’m at the wasteland. It’s 12:20 am. I just walked up from the street through the woods to the wasteland and a bat met me at the clearing in the thickets. It flew just in front of my face. Then perched in a tree to the left of me. I stayed where I was and very still. I put the red light on my headlamp on to get a better look. It flew back and forth in front of me about 5 ft away thrice, in a downward arch. Then stayed in a branch about my eye level for a minute. Then flew away. It’s a full moon. The closest it has been to the earth in an extremely long time.

Abyss
Noun. A distance or separation between two things. The Animated Bestiary